The solar panels were fixed onto the wall of the house on a framework which I constructed myself.

I was planning on installing them on the roof later on, but the way I'm thinking now is to go for solar roof tiles, and use the solar panels as some kind of remote stand-off system for powering a fridge or whatever. 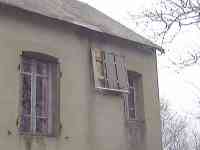 The fourescent lights in the house neededfar too much current to start up, and so they were changed to 12 - volt halogens. These proved to be much more satisfactory even though they draw more current, and there wasn't any of this burring noise with them either.

While I was at it, and while I had the 12-volt halogens and fittings to hand, I installed a few in the barn. This makes working inside so much easier.

As a Consequenc of all of this, more power was needed. Two 90 amp - hour recreational batteries of the type that are normally fitted to caravans have been bought as another long - term temporary solution. Ultimately I'm intending to use a range of 2 - volt fork - lift truck cells or maybe some golf-cart batteries.

I'm making quite a collection of cordless drills and the like as well as all other kinds of 12-volt appliances, so in the barn I put in a few cigarette-lighter sockets to run 12-volt car appliances and to charge up cordless drills etc.

Other tasks carried out were :=

Summer 2000 was a period of rapid development.

I dug a trench 7 metres long and one metre deep and laid a water pipe and an armoured cable sheath. In the armoured sheath I ran three heavy duty pairs and earths, a telephone line, a co-ax cable, an earth wire and two lengths of seven-core caravan cable.

Unbelievably, that took ten days to dig. You should have seen the size of the stones - I had to fetch help to lift one of them out.

Once that was done, I finally installed the deep - discharge caravan batteries - three of them now, having acquired another one.

I was never a big fan of cigarette lighter sockets.

At last, I have a real integrated system and I'm impressed with that.

With one of the the three heavy-duty cable pairs, I've connected up the wind turbine to a mini-controller with the solar panels.

The second pair was used to connect up the batteries in the house with those in the barn and on the caravan.

The third pair is a spare and I might use this for running a 230 volt current from an inverter.

The 14 cores of caravan wire are for individual power lines for running power across for specific needs, like connecting two-way light switches and so on. I'll work that out as I go along.

Inside the house I took out the stairs. They aren't where I want them to be and in any case they take up far too much space. The plan at the moment is to install a spiral staircase in to save space.

Very little was done in November 2000.

That's because there was an emergency in Brussels which led to my having to spend my two free weeks with the Transit towing a trailer moving all my cars down to the farm. That was 1500 kilometres or 950 miles each trip.

Then of course the vehicles had to be loaded and unloaded at each end - and all alone as well. I needed another holiday when I'd finished all of that.

While I was there in November, I did notice that the batteries were not performing as I would have expected. Further investigation revealed that one of the new deep discharge batteries I'd bought had failed already.

That was rather demoralising and so I'm going to have to get this battery problem sorted out properly and permanently.

However, a quick visit in December 2000 revealed that all batteries were fully-charged and held their charge during a lengthy period of usage. When I left in November I had disconnected the caravan from the circuit. That makes me wonder if there's a short circuit somewhere inside the caravan's wiring that's draining the current.

See more photos from 2000 in the photo gallery.