Having had something of a bad year last year when I was becailmed by a whole series of lengthy interruptions, I resolved to take two serious steps to improve my fortunes as far as work on the house would go this year

First thing that I needed to do was to make some room.

The ground floor of my house had been used as a rubbish dump for years and years. All kinds of stuff were stocked in there, including a whole pile of builders' rubble from digging out the hole for the batteries and demolishing the wall for the entrance hall.

I need a place to put the stuff that's upstairs in where the bedroom will be and also a place to set up some kind of workbench, and so I spent a good couple of weeks tidying everything up and taking out the rubbish.

And you'll be astonished (or maybe you won't) at the objects that I found that had long-been lost, including the excellent sunglasses that I had bought in the USA in 2005

For some reason that I can't understand, space has always been an issue with me and you'll recall that I've spent a good deal of time just recently making a load of shelving here and there.

Here's another lot of shelving. It's just inside the down-hill lean-to and I intend to use this to put all of the screws, nails and the like so that they are close to hand, conveniently arranged but out of the way of where I'm likely to be working.

The more that I can do of this, the better. I hate having stuff trailing around under my feet.

Now that I have a place to work and to cut up plasterboard, I can get cracking.

I've started to do the stairs properly. previously, there were just off-cuts of all kinds of bits of wood used as the treads, and no risers at all. Now, I have cut-down pine boards as risers and the left-over floorboards as stair-treads.

Not only that, you'll notice that the walls in the stairwell to the attic are growing plasterboard. And not only that, by the time that it was finished, the stairwell had grown a couple of shelves - above head height but easy to reach from a higher step. I'm heavily into shelving right now.

I've also finally worked out what I want to do to the window surrounds, and I wish that I had done this to the one in the attic because it really has worked out well. In fact I probably will do it in the attic when I've finished.

I had plenty of off-cuts of tongue-and-grooving from when I did the ceiling in the bedroom, and years ago, I acquired a pile of assorted left-over tiles from a shop in Brussels. Combining the two, I've come up with this arrangement for the window surround.

It does look good, even though I say it myself. I wish now that I had done the window in the attic like this.

I'm not much good at gardening but that's never been a reason not to try. And so we mustn't forget the raised beds for the vegetable plots.

I prefer raised beds because although they take much longer to prepare, they take much less work when they are prepared and with the soil being uncompacted (there's no walking on a raised bed of course - you can reach the centre with your spade from all the way round) the crops grow easier and you can set them closer together. 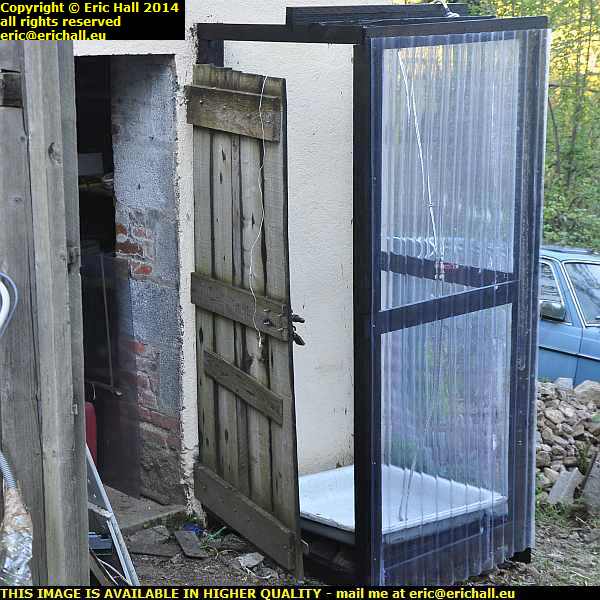 With the summer on its way we can spend more time outside. And a good ferret around in the barn, which produced an old enamel 80cm showerbase that had slipped my mind completely, we can launch yet another project.

Plumbing here is ... errr ... limited to say the least and in the summer I rely heavily on solar energy for water heating. And so I built myself an outdoor shower cubicle, stuck a black plastic box on top, covered it with an old caravan window, did some elementary plumbing with an old shower head, and here I am - warm showers every day that the sun shines brightly, whenever that might be. 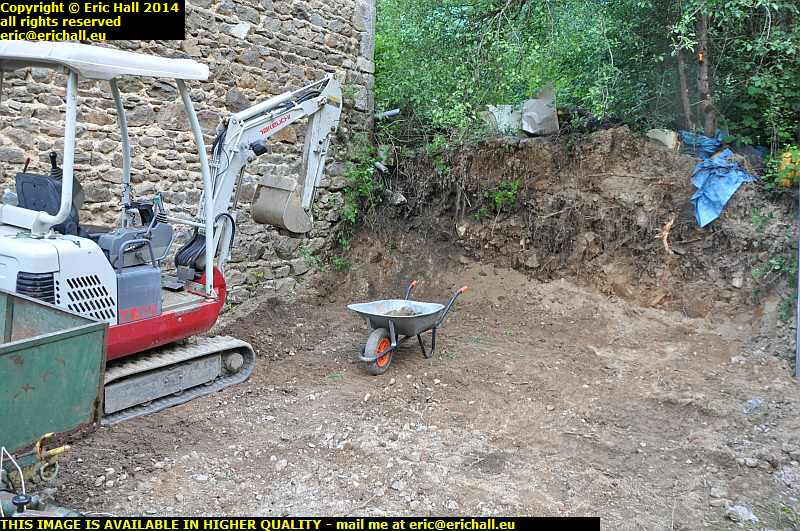 Now, what on earth am I doing here with the mini-digger? You may well ask. In fact, it's due to Terry, who owes me a couple of days' work and just happened to be free

I've long-since decided is that here is going to be my final place of permanent residence, and so I need to think about the long-term future. I have a car-park here as you know, but it's all hardcore and sand. I have half-a-dozen cars that I intend to restore and I've done enough of that in the past in really uncomfortable situations and I'm not as young as I used to be.

And here's the result up to date. You'll see that We have a huge concrete pad here for parking all of the fleet. And not only that, you'll notice that there's a small inspection pit. It's not very deep but you can sit down there and work. I'm no longer going to lie down on my back underneath a vehicle if I don't need to.

And pylons there too. In fact, pylons everywhere. In the fullness of time we'll have gates here and a roof over the top. It's high time that I did my work in total comfort.

Once the concreting had been done, I turned my attention to the back of the house. A chance encounter with the local farmer who rents his field behind my house and who told me that he wasn't going to bring his cows round for a month, prompted me to put up the scaffolding.

I've now filled in under the eaves, painted all of the woodwork with wood treatment, fitted the rear guttering, repaired the pointing at the back of the house and completely pointed all of the wall of the lean-to that I rebuilt a couple of years ago.

I cleared out all of the weeds at the back too, and all of the lime cement that fell at the base of the house willkeep them down. And the guttering on the roof will keep the rear of the house dry too.

When we did the concreting, we were a couple of cubic metres short. And then just before I went to Canada, Caliburn and I had to go to Rouen to bring back someone's broken-down car. What I reckoned that it owed me was, curiously enough, the price of the concrete and enough labour to finish the job.

And so the result was inevitable. A couple of fine days in early November when everyone was free and the job was complete, at no real cost to Yours Truly.

The wholesaler who supplies me with all of my renewable energy gear was having a sale and amongst the items on sale at a ridiculously cheap price were new heavy-duty deep-cycle batteries. I've been running for 15 years on second-hand batteries as you know and it's high time that I pushed the boat out.

I had to enlarge the battery box to take them, but that's no big deal really. And I'm glad that I did, because already, with just four of the new batteries in place, my electrical system has leapt forward in spades.

It wasn't just in the house that I replaced the batteries. There were 100 amp-hour batteries on special offer too and so I bought a shed-load of them too for the barn.

This prompted me to finally start to get to grips with the electrical system in the barn and I spent two weeks building a proper power board in there with everything wired in correctly.

If it's only half as efficient as what the house seems to be doing right now, it will still be great progress

If you remember back a while ago when we were digging out for the concreting, I was tipping the waste into the old Sankey trailer in order to move it for disposal. Unfortunately, the bottom fell out of that trailer when I dropped a load of rocks and soil into it and I reckoned that it was time to look for a new one.

Having been astonished by how much the price of new trailers has increased over the last three or four years, I was grateful when someone pointed me in the direction of an old but good Indespension plant trailer that could be adapted for my needs.

What I wasn't prepared for was what was parked on it, also for sale. An old, oily but working Kubota mini-digger. I have a half-share in the other one but it's never usually available when I need it, and when I found out that the price for this complete outfit was less than what I would have had to pay for just a new trailer, I bit the bullet and here we are.

That's not the only new toy that turned up here during the year. You might have seen this one in one of the earlier photos and been wondering what it is.

You might recall back a few years ago that I spent days hand-winching vehicles across the field, or wheelbarrowing logs and breeze blocks and sacks of cement about the place. I'm getting far too old for this kind of thing these days so when I had a life assurance policy mature earlier this year, I went off on a look around.

Kubota make a mini-tractor, 4wd diesel with tri-point lift, PTO, everything at a very democratic price. And when they brought out a new model earlier in the year they reduced the price of the older one even more.

Add to that the fact that this "cash for clunkers" deal applied to farm machinery, which meant that I would have an additional €1,000 if I had something to part-exchange, and I just happened to have an old non-running lawn tractor lying around, then there really was no argument.

This was what I was using to pull the Sankey trailer around with all of the soil and rubble from the parking area and it really did do a good job of this. Well-worth the money.

What you will also notice is a small portable power board with a 600-watt inverter. With the Kubota's hand-throttle set at half-speed, the alternator throws out 600 watts and so I've wired a connector into the charging circuit of the Kubota so that it will run the inverter when necessary.

When the winter hit hard, I was back working in the house again, and found myself almost exactly where I was this time last year.

All of the stairs are now finished and there's new flooring on the landing on the first floor. When we had a day or two of warmer weather I lashed several coats of varnishing onto it all to seal in all of the wood and even though I say it myself, it does look rather impressive. Much better than all of the off-cuts of scrap wood that were there before.

If I'm not very careful, this place will begin to look as if someone is actually living here, and that will never do.