Some time ago, in another place, I wrote critically about the shameful attempts of British Rail in seeking to bring about the downfall of a railway line by dirty work involving a viaduct at Ribblehead. I've also, in several other places, been extremely critical for what passes for "preservation" (or lack thereof) of historical objects in the USA. Who would have thought that, just 30 km (18 miles) from my own home in France, in 2008, I would have to report a scandal that outranks all the others?

So just to show that there is nothing chavinistic or biased about either me or my reporting, let me tell you something about the Viaduc des Fades.

I live on the northern edge of a range of hills, the Monts de la Combraille or Les Combrailles, which form the northern limit of the Massif Central, the mass of mountains that make up south-central France. The Combrailles themselves are definitely split into two parts, a northern part and a southern part, by a huge gash that appears to have been slashed into the living rock. Through this gash runs the River Sioule, hence the gash is known as the Gorge de la Sioule.

The Auvergne is one of the poorer parts of France and the railways were late in arriving. Montlucon with its iron and steel was well-served by the Canal du Berry and later with Paris by the Paris - Orleans Company, whereas Clermont Ferrand with its industry was connected to Paris via Gannat in 1855 by the Paris - Lyon - Marseille Company. Connections between Montlucon and Clermont Ferrand, in the early days at least, were not thought necessary.

The discovery of coal in the area between Commentry and St Eloy led to the rapid expansion of railways in the area. A line was constructed between Montlucon and St Eloy via Commentry in 1865, and in 1871, a junction was made from this line at Lapeyrouse to connect with the Paris - Clermont Ferrand line at Gannat.

A short distance outside Lapeyrouse, this new line had to cross the valley of the River Bouble and a magnificent steel viaduct was constructed. The engineer responsible for this magnificent viaduct, and who had cut his teeth on others in the area, was a young Gustave Eiffel - he of the Tower fame.

But no sooner was a new railway line built than another coal mine would open in the vicinity. The amount of rail traffic continued to increase, and the railways could no longer keep pace. Gannat became a notorious bottleneck and another way had to be found to connect Montlucon with Clermont Ferrand.

The decision was made to extend the colliery line that terminated at the mines of St Eloy. , and run it to Clermont Ferrand via the Col de Paulniat. Plans for a line were presented to the Ministry of Public Works in 1879 and on 22 July 1881 consent was given. But what followed was an unseemly wrangle about operating rights and permissions between the Paris - Orleans company and the Paris - Lyons - Mediterranean company. Both companies were jealous of the other gaining a foothold in what the companies considered to be their own private territory.

In the 1890s, the coalfield around Youx and Montjoie, a few miles south-west of St.Eloy was discovered and this gave a new urgency to the situation. The output of coal from the St.Eloy region soared from 10,000 tonnes to 175,000 tonnes in a matter of a few years.

Finally, on 20th March 1893, it was announced that the plans of the Paris - Orleans line had won the day and the company set out to survey a route (as you can see, things were done differently than in the UK).

There were three main routes that were eagerly supported by their partisans but the choice fell on that proposed by Abel Draux in 1894. This proposed line crossed the Sioule between Sauret-Besserve and Les Ancizes, at a hamlet called "Les Fades"

There are two suggestions for the origin of the name. One is that it derives from the latin Fata, the Goddess of Destiny and which became corrupted into fée, or "fairy" and signifying the mystical or ethereal. The second suggestion is that it originates from the word fada, which in the langue d'oc means "crazy", and a word which is still quite often heard around here. 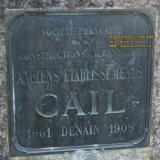 Several designs were submitted for a viaduct, with that of Félix Virard being selected on 26 April 1901. This design was put out to tender and on 25th of July the company "Société Française de Constructions Mécaniques", formerly known as CAIL and from Denain in the heart of the iron and steel belt to the south-west of Lille was awarded the contract.

The viaduct is a magnificent construction. It's over 470 metres long and at its highest point it is just over 132 metres above the bottom of the valley. This made it the highest railway bridge in the world when it was built. Today it is the second-highest, a bridge near Podgorica in Montenegro or Crna Gora being 201 metres high.

The bridge was designed with two brick arches on the left bank and one brick arch on the right bank. The remainder is a steel bed built in the form of St Andrew's crosses. It is 376 metres long and rests on two piers. Each pier is 93 metres high and set in 116 metres from the brickwork. The central span is 144 metres.

Construction began in October 1901. The workforce numbered at least 800, and they came from everywhere. Even in this period there were still skilled itinerant masons and ironworkers in France, and many flocked to the site. And just like another world-famous viaduct a shanty town sprung up overnight in the shadow of the construction.

The method of construction was fascinating. The piles were build of large stone blocks from a nearby quarry and shaped by hand, each block taking about two hours to do. The offcuts were ground up by a special machine and turned into sand that was mixed with lime to make the mortar.

It wasn't long before the first disaster. A matter of weeks, in fact. Clearing away the site of the left bank, a whole series of landslips took place. Almost 3,000 cubic metres of debris had to be cleared away before work could recommence. But at least now there was solid rock to build on.

Or so they thought

A short while later, in June 1902, it was noticed with some alarm that the whole of the left bank seemed to be moving slowly. It transpired that the builders had been misled as to the nature of the bank. It was not all solid rock as they had believed - there was a seam of clay that was running though the bank and the construction works had caused it to become waterlogged.

At first it was thought that the construction would not be imperilled but as the masonry began to lean ominously towards the river this was seen to be a forlorn hope. In late 1903 a whole series of drains was installed to take away the water and to dry out the clay. By now the engineers were having second thoughts about the heavy masonry arches on the unstable left bank and they decided upon a hurried redesign to lessen the weight (this is all starting to sound very familiar, isn't it? It's exactly the same story as for the first Tay Bridge).

The designers and engineers settled on a continuation of the steel roadway, supported by another iron pier (it IS just like the first Tay Bridge), and the stone arches on the left bank were demolished in February 1905. The steel pier that replaced them was 33 metres high, with foundations of ... er ... 45 metres. This unprecedented depth required illumination day and night while work was carried out, and the workmen were winched in and out of the hole.

This change of plan delayed the construction by two years.

The roadway was built in a most extraordinary way. Well, part of it was. The parts that were built out from either side to the central piers were built in the traditional way, supported on scaffolding. But the central span was built out from either side in a sort-of cantilever construction with the side framework being built outwards piece by piece towards each other. Each side had a cage inside it within which were the builders. They attached the pieces of the span, and then winched the cage along and inserted the next piece. By this method, they assembled 2.6 metres (about 8 feet) of span each day.

For those of you interested in statistics, no fewer than 71,609 rivets were used in the construction.

Probably the most surprising thing about the construction was that when the two sides finally met, on 18 May 1909, they were less than 40cms out in both the lateral and vertical. This had been foreseen, and a huge hydraulic machine pulled everything into place.

On 20th October 1909, only 4 years behind schedule, the viaduct was finally opened. It had cost just over 3,500,000 francs, and one life. It has been properly recognised for what it is - a magnificent construction and a work of art, and in 1984 it became a "listed building".

It has to be said that the earthworks involved in building the line - and not just the viaduct itself either - were stupendous. This area of the Combrailles is pitted with difficult rock outcrops and deep chasms. And the sudden and violent rainstorms that occur (on 11th September 2008 40 cms - over one and a half inches - of rainfall fell in less than 3 hours) can transform a small stream into a raging torrent. The earthworks needed to be up to the task.

From the north (St Gervais) end, the access to the viaduct is via a tunnel, because of this huge outcrop of rock right across the path of the railway.

It's called the Tunnel de Toureix, and as you can see from the sign it is 395 metres long.

It is said locally that Gustave Eiffel was responsible for the construction of the tunnel, but I find that to be most unlikely. Following the Panama Canal scandal if the 1890s, he had effectively retired from construction by the time this tunnel was built, He was involving himself more and more in the science of aerodynamics.