2008. This is the first complete year that I am going to be down here permanently. I've been planning this for a long time and I'm glad that I've managed to bring it to fruition.

In early January I finished the verandah well enough to move all of my possessions into it, and as a result I demolished the camp camp and put everything away.

There were a lot of dead and dying trees so another January task was to cut down the worst of them and salvage the wood. Let it dry out, and there would be a big stack of firewood for the following winter, and who knows? Maybe the tree might even raise itself from the dead. That would be a bonus.

But the Auvergne mud was getting me down completely. With all of the rainfall that there is around here, I was up to my ears in it more often than not. I'd had enough of it, and not being in much of a position to do a great deal about it, I took some kind of positive action and laid down some old pallets as duckboards.

It's not the ideal solution but at least I can keep myself and my living accommodation in some sort of cleanliness.

The main feature of 2008 was the garden. It was going to be the roofing, but something cropped up, which meant that until mid-August I was constantly coming and going to the UK and so I couldn't make any kind of start on any of the roofs.

Where the camp camp had been and in the space that was behind it, that was what I was intending to cultivate. I was pulling up bramble roots and digging over the patch of ground for most of January and February.

It's not the ideal place to have the garden, but I was intending to be here for the full year and it was a shame to waste the opportunities that that presented. To eat my own veg has always been one of my long-term aims, so I may as well make a good start.

By the middle of June it was looking like this - surprisingly neat and tidy. The vegetables that I planted seem to be doing fine, and I've also fitted a rainwater system on the verandah that drains into a water butt that I've fitted onto a stand that I built.

There's a cloche there too for the delicate plants, and an improvised bird scarer (that didn't work so I built another out of old plastic bottles and scrap CDs)

The verandah has been painted too. It's Caliburn yellow, in case you were wondering.

You'll remember back in 2006 how I started to install the flooring in the front of the barn. I did just enough to give me a place to pitch my tent and then I carried in with other things.

But at the end of May with a week of poor weather and nothing particularly pressing, I went back and did the other half of the floor. So now that's that done and I can start sorting out all of the wood that I've been collecting.

One thing that I did, which was really a good idea, was to fit a trapdoor in the floor over the double doors downstairs that lead to the outside. Now, if I have anything heavy or complicated, I can just lift it up (or lower it down) through the trapdoor without having to maul it around inside the barn. 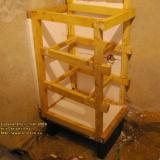 The roofing for the barn finally arrived, and as I write, I'm hoping that at least some of it will be done by the end of the year. Once it's up, I'll be moving the solar panels and one of the big wind turbines down to the south-west end of the barn where access is so much easier.

This means that I'll be having to put the batteries down there too (the shorter length of 12 volt cable, the better) and having frequently topped out the four 100 amp-hour batteries with just 3 badly sited solar panels and no wind turbine, then I've gone for nine of them and so I'll need a pretty good battery box. This one is in three banks of three, and is heavily insulated to keep out the cold, as batteries lose their efficiency as the temperature drops. For the future, I'm planning on putting a heatswitch in there. This will switch on a halogen light when the temperature drops below 5 degrees Centigrade. The light will generate heat and hopefully warm everywhere up again. I reckon that running a 10 watt light wll gain more energy than it will lose with 9 batteries in the box. 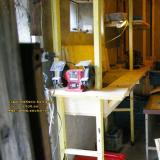 During the month of August the battery box expanded along the wall of the barn, and the extension became an absolutely fantastic workbench. With winter not too far away I won't be able to work outside as I normally like to do, so I'm intending to take advantage of a warm dry corner with a nice bit of ceiling above. It makes a nice change to have all of my tools and other things so close at hand.

You'll notice that parts of the top lift up like a kiddies' school desk. It's in these cubby holes that I'm keeping all my tools so that with a bit of luck I'll be able to find them so much easier. I have to say that I didn't expect it to come out as well as it did. I'm really impressed with this and it's already proving to be quite useful.

I've had a Rutland WG 910 wind turbine on the barn since 1999. It was second-hand when I bought it, and it finally gave up the ghost. Seeing as it was made in 1984, it was not so much of a surprise that sooner or later it would pack up.

I took it down and stripped it to see if I could see the problem, and as you might expect, the bearings had failed. I was told when I bought it that the bearings had been replaced, but that was only half the story. The rear bearing (the easy one to change) had been replaced, but the front one (difficult) had not. And it was an old type of open frame ball bearing that had totally seized up. That's what I call shameful workmanship, just replacing one of them. I'd love to see what the previous owner was charged for.

The bearings are a common type - 6202 - so don't be tempted to order them from the turbine manufacturer, buy them off eBay at $2.85, £1.50, €2.00 the pair, or ask your friendly neighbourhood electrical engineer if he has a couple in his toolbox (thanks, Terry. I'll buy you a pint or two in due course.) and that was that. After no little trial and error, it now spins round perfectly in the slightest breeze and I'm well-impressed.

And with having taken the Rutland down, this gave me an opportunity to take the 4-metre pole down and put up one of the 5.5 metre poles I'd bought in 2007, and on top of this I fitted the AIR AH403 wind turbine that I've had lying around here for several years.

It will take ages to run in, but even after a few weeks it was going round in no more than a stiff breeze. In a hurricane that we had, it went round like this.

What helped was the extra height that now gets it just above the apex of the roof, and also the fact that I cut down the trees behind the barn that were shading the turbine from the wind. But this is only a temporary home. When the barn roof is done, the turbne will be going at the southern end of the barn right at the apex. That will put it some 4 metres above the roof right in the path of the prevailing westerly winds and it will do much more good there.

So once I found myself in lumberjack mode, I decided to crack on now that winter was descending quite rapidly. This area behind the barn is where I'm planning to level off and use as a place to park Caliburn and the Passat and Claude reckoned he might be able to borrow the Council's digger to level it off. This involved removing a good number of trees.

By the beginning of December I'd made really good progress as you can see on the area where I'm intending to park my cars. You can also see the Finnish lumberjack axe embedded in a tree stump just there. That was a present from a Finnish Army General who I drove around for a few weeks in my diplomatic chauffeur days.

Claude has inspected the area and he is confident that he can pull up the stumps with the digger, so that has saved me a lot of work.

That wasn't all the tree-felling I did either. I've cut down about 20 straggly trees in my field down from the house. They were overhanging the grass preventing it from drying out and were in danger of collapsing as the roots became more and more waterlogged. I'll be up to my ears in firewood soon - a very pleasant prospect.

The final major project for 2008 was to sort out the drainage. When I'd started on thisback in 1999, it was rather ad-hoc and haphazard. Now that I have much more of an idea I can see that I could have sited one of the drains better and in any case I needed to start to dig down to lay the pipe that will take the waste water down the field to where I'm going to dig my lagoons. This had to be done fairly quickly as this is where I'll be scattering the old broken slates that I'll be taking off the roof, so now seemed like as good a time as any to do this.

The first two lengths of drain are in, and you can see the snaky course that it's taking. That can't be helped, as the rocks in here too were enormous and one or two of them were beyond my capacity to move.

But this has got me thinking. I'm wondering if, as in the garden, there's a layer of rocks under here that form a path, and the mud is simply a layer of rotting humus that is waterlogged due to the rainwater being unable to pass through the rock bed. When I get time, I'm going to have a good scrape and see what I can reveal.

See more photos from 2008 in the photo gallery.