And it's all thanks to John Bannen in the USA who runs a mail-order renewable energy supply company in California.

With my two wind turbines, I'm just a little worried that I'm going to be overloading my batteries, regardless of controller, and it's a shame to waste the excess electricity. So I was thinking of a dump load to stick it in.

So a quick 'phone call to the States, and hey presto, ten days later, came two immersion heater elements (one to run off each turbine) - 12-volt!. Now I'm not expecting big things from them, but the idea of having some sort of free hot water is very tempting indeed!

Meantime I was back on the farm at Easter for a couple of weeks. The bad news was that, due to the heavy frost so late in the Spring, many of the fruit trees I planted in the autumn of 2002 didn't survive. That was really disappointing (and expensive) news but I don't suppose it can be helped. They were mostly the "fragile" ones, like the cherry, apricot, and plum trees too!

The local hypermarket in Montlucon though, still had a few pear trees left at half price (like £1.00 instead of £2.00!) so I chose a few that had grown leaves, and quickly planted them, to see what would happen. I reckon the next lot I plant, I'll have to dig in a lot deeper to protect the roots.

Meantime, after a ruthless bit of "forest clearance" in the garden, I put up the plastic greenhouse I'd bought, and planted the tomato plants I'd been growing from seed in the apartment in Brussels.

The shower pack works quite well but I'm disappointed with the heat exchanger and can see several places where I could have designed it better. I'm going to redesign it in the summer and incorporate in it the 12-volt immersion heater elements for when I get the new wind turbines up on the roof.

I had a play with the wind turbines but they're beasts of machines and I can't get enough height just messing about. Some serious engineering work is needed for this sort of thing!

At least - that was what I wrote in the Spring. What happened in the summer was that my health problem worsened. So much so, in fact, that it led to a spell of a couple of months in hospital. 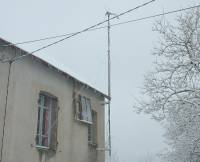 When they finally let me out of hospital, I went back to the farm but was in no fit state to carry on working. Consequently I had to return to Brussels to convalesce.

Not before my neighbour Claude and I succeeded in getting one of the wind turbines up on the roof, however.

Here's a photograph of the turbine, taken in December 2003 when I was down on the farm for a couple of days just before Christmas, in the snow.

See more photos from 2003 in the photo gallery.