The first and most important job was the hole in the wall between the house itself and the uphill lean-to at the side which I'm planning to use as the kitchen.

Someone knocked this hole through without any regard to the weight of the wall above it, so it was already starting to sag. When a brick fell out and landed at my feet, I thought "enough is enough". Just imagine if that had landed on my head. It might have damaged the brick.

To hold it in position, I had to support this on my back whilst I piled up bricks one on top of another. That was the only way that I could raise it high enough to get some acrows underneath, and I suffered with my back for a fortnight after that.

Once the acrows were underneath I jacked the beam into position to support the wall above it. That was the easy bit

Then I had to cut into the brickwork and stone walls either side with nothing but a hammer and bolster chisel, in order to make some steps to key in a brick pillar either side to support the beam. That took two weeks to do half of it.

Things did get easier when Paul produced a small petrol generator to power an electric drill to make some guide holes. And now the pillars are in. They aren't too vertical but at least they're holding up the beam which is holding up the wall

The floor in the attic was somewhat on the weak side, and closer inspection revealed that it and one of the beams that was supporting it was grub-infested. Someone in the past had done a magnificent repair job, in nailing a piece of hardboard over a hole in the floorboards.

That's no answer to what will soon be a very serious problem in the long term and so I smashed all the floorboards out, soaked everything remaining in preservative, bought a syringe and injected the product down the tunnels the beasts had left in the beams.

There is at the moment a temporary pallet floor which seems to be working fine, and doesn't appear to be infested.

However these grubs are nasty swines - I had a piece of timber in the back of my van for a couple of weeks to show people, and I've now noticed that my timber floor panelling has a couple of grub holes in it. 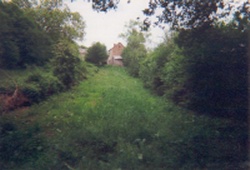 Another important development was the fruit trees.

There were 19 left and, needless to say, when I left the shop they had none remaining!

The field below the house is so steep that I was wondering what to do with it. Ordinary farming techniques are not suitable, so now it's an orchard. Two winters have seen only 11 trees remaining, but they seem to be strong and healthy.

And Autumn 2000 saw me with 3 apples and a plum. At least I'm a French farmer now I wonder what Autumn 2001 will bring. in actual fact - nothing at all. The late winter snow we had in May killed everything.

You can see to the left of the fruit trees to where I intend to take advantage of the steep slope to put the lagoons for purifying the water. 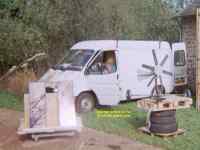 In October 1999 we put it up on the end of the barn to charge up a couple of cheap 45 amp - hour automotive batteries so there was at least 12 volts in the barn.

I also bought a basic 12 - volt electrical system consisting of 2 x 12 - watt solar panels, 2 x 12 - volt flourescent lights with cables and regulator, which I bought for $150 from the Renewable Energy fair in Amsterdam.

November 1999 saw me wire up the lights in the house, and I stood the panels up outside the house whilst I was there and connected then to an old lorry battery to have some lighting in the house.

All the doors on the East side of the barn were replaced with doors that we constructed ourselves on site. Now everything closes and locks properly.

See more photos from 1999 in the photo gallery.