… four hours out with Alison today.

She came round at about 11:00 and we went off to the good cafe down the street for a coffee and a chat. We were there for quite some time too.

Once we’d finished we went for a walk to look at a couple of shops and then went down the road to the ALDI where Alison did some of her shopping. And then over the road to Spit, the huge Charity Shop just there. And there was tons of good stuff in there too, much of which is at a decent price. I could quite happily furnish a small apartment from there.

There’s a Troc in the vicinity too, somewhere in between Leuven and Mechelen. The prices in there though are totally ridiculous, even though the stuff looks really good quality. But here’s something that you can buy me for Christmas if you can’t think of anything better – they had a late Medieval suit of armour in there. Wouldn’t that look nice standing up in the corner of my house? But €895 was a bit ridiculous really, although nothing like as ridiculous as the €12,500 they wanted for a bronze fountain that looked like a good well.

Alison took me later to the English shop. There’s a fish and chips van that parks up there a couple of days a week but that wasn’t what excited me. They had vegan pies which will go down nicely with some new potatoes and vegetables, but the highlight was definitely the vegan mince pies. I’ll be back there a few days before Christmas, that’s for sure.

On the way back I picked up a baguette at the Carrefour by the football ground and had lunch once I returned. following that I did some more research for my web pages on Labrador. I’ve found a couple of really good sites of interest on the internet – one that lists every known community in Labrador in about 1910 and the access port where appropriate (and there’s tons of interesting stuff on there) and secondly, an interactive map that shows the location of almost every known geographical feature in Labrador. I could really lose myself in those sites.

For tea it was pasta with a tin of chick peas and vegetables and tomato sauce. and then a nice relaxing evening.

This afternoon I’d crashed out for an hour or so but that is probably something to do with the disturbed night that I’d had. It took me ages to drop off to sleep and when I finally did, I was up and down several times too.

I’d been on my travels too, out to the Coasts of Labrador where there was a very narrow strip of land in bewteen the cliffs that narrowed even more just where I had to cross over the mouth of a small river. There was a young teenage girl with me too, rather like a girl with whom I’d had a lengthy discussion once when I was out on the North Shore of the Gulf of St Lawrence in May 2012. Although what she was doing suddenly making an appearance I have no idea.

… to come around this morning. They were earlier than anticipated, something that took me very much by surprise, and I wasn’t really ready, but I wasn’t going to send them away. Of course not! Two of them, there were, and they worked quite rapidly to empty the place. It didn’t take them too long to dismantle the big wall unit either, and that soon disappeared into the back of their van.

What impressed me though was how they managed to move the wardrobe in the cellar. It was a little rickety and I was half-expecting them to dismantle it, but no – they had a huge roll of clingfilm and they wrapped it in that. You’ve no idea just how rigid that made it, and when I expressed my admiration, they gave me what remained of the roll, which was an unexpected bonus. 40 years and more I’ve been furniture-removing – I wish I had thought of this before.

After they had gone, I needed to arrange a cleaner. The estate agents had given me a phone number and in the end I was put in touch with a woman who would come at 09:00 tomorrow. Perfect timing, of course, and so I didn’t hesitate. That’s one more job crossed off the list of things to do.

Back to the cellar and that had a thorough going-over. I can forget about that from now on. I went back upstairs and took down all the curtains. The cleaner will need to be able to get to the windows.

But the apartment is now fairly empty, and when I talk out loud to myself I can hear an echo echo echo.

… came around this morning as promised and went through the furniture. He doesn’t want all of it and for what he does want, his terms are hardly generous, but then I’ve been trying to sell this stuff for a couple of months and only some of the stuff has gone, and I’ve really no idea what to do with the rest and it has to be gone by next weekend and so I have to cut my losses and move it on. I’m playing for much bigger stakes than a couple of hundred Euros.

I also had a phone call from the church of St Vincent de Paul. They could well be interested in what is left over, and they have a van slot free for 10:30 next Tuesday. Consequently, that will be the rest of the stuff gone, and what is left over after all of that will be out on the street on Wednesday evening, either for the dustbin men or for whoever it is that goes a-wandering past.

And apart from that, I’ve been tidying up again. I need to keep on top of all of this. 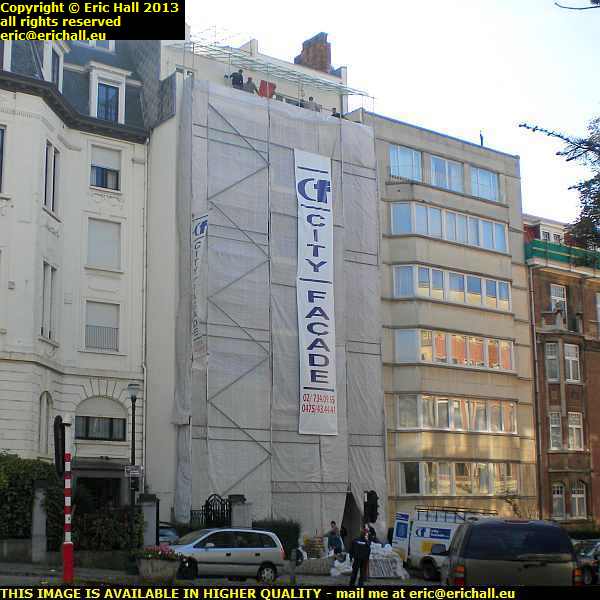 … about the property just now, didn’t I? This is what greeted me when I arrived – the building is shrouded in a cover and the facade is under repair. But what a repair! There are two men up on the scaffolding filling in the holes in the wall. There are two men down at the foot mixing the cement. There are another two men fastening the buckets of cement to ropes, using open hooks, and, standing in the roadway, pulling down on the ropes to raise the buckets.

No means of security – it just wants a moment’s distraction for a bucket to crash down on the head of a passer-by, someone leaving the building, or a car on the road. Or even on what is laughingly described as a workman, because not one of them is wearing any safety gear like a helmet or steel toecapped shoes. I asked one of them what he thought about the conditions of work but he just smiled at me. Closer inspection of the scaffolding revealed that it’s from a company called Delta in Warsaw. Clearly City Facade consider workers from Eastern Europe to be by and large expendible on their chantiers.

Internet was the next issue. The sum that Marianne owes is enormous and I’ve rather had my fill of paying for Marianne’s debts just now. The good news is that being right next to the University there’s a wifi hotspot that bleeds over here. It’s payable, like anything else in this Godforsaken country, but if I go for a minimum service (which is really all that I need) it’s quite good value for a fortnight’s subscrition – much better than any other deal I’ve been offered. However, while I was at Proximus, they were selling open-network wifi dongles for just €40 and, as you know, I have the right to wifi access on my French, my British and my Canadian sim card. Canadian access is not so important now that there is free wifi at Tim Horton’s, but the rest will come in handy.

I’ve also spent most of the afternoon on the phone. There’s a guy from a troc coming round to see the furniture that is available, but as far as charities go, theres no-one interested in the rest. It’s astonishing. Most of them want me to photograph the stuff and give a full description before they come to collect it. Obviously, as my friend Erika says, beggars CAN be choosers. But one thing about this is that it all beggars belief. No wonder people don’t donate stuff any more if they have to jump through hoops like this.