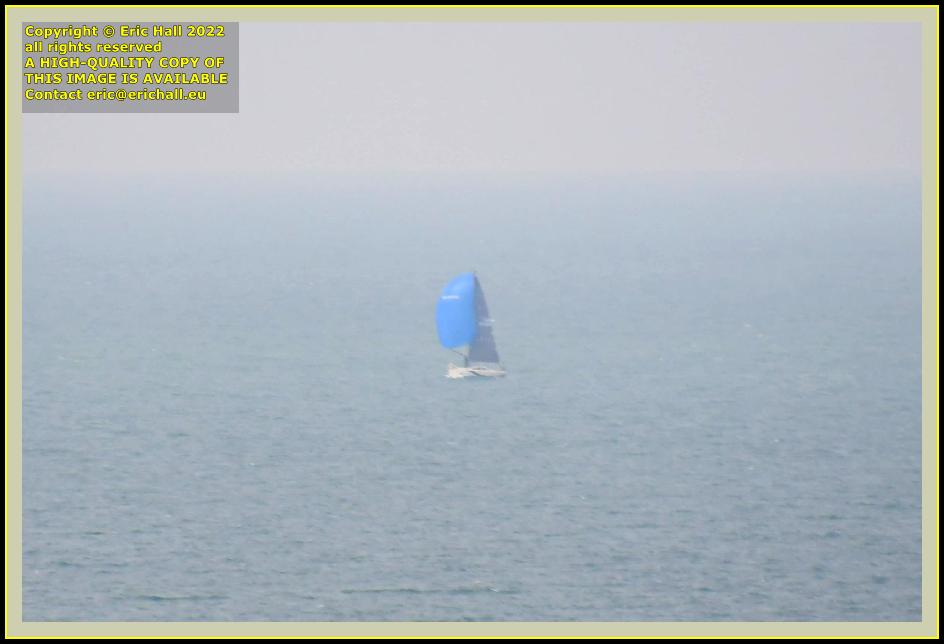 … what happened today but I’ve been feeling much better than i have done for the last few days.

And so while you admire a handful of photos of all of the maritime traffic that was out and about this afternoon while I was on my post-prandial perambulation around the perimeter of the Pointe du Roc, I’ll tell you all about it.

Even the bit about not only not crashing out during the day but not actually feeling as if I needed to, and isn’t that some kind of progress from the way that things have been just recently? 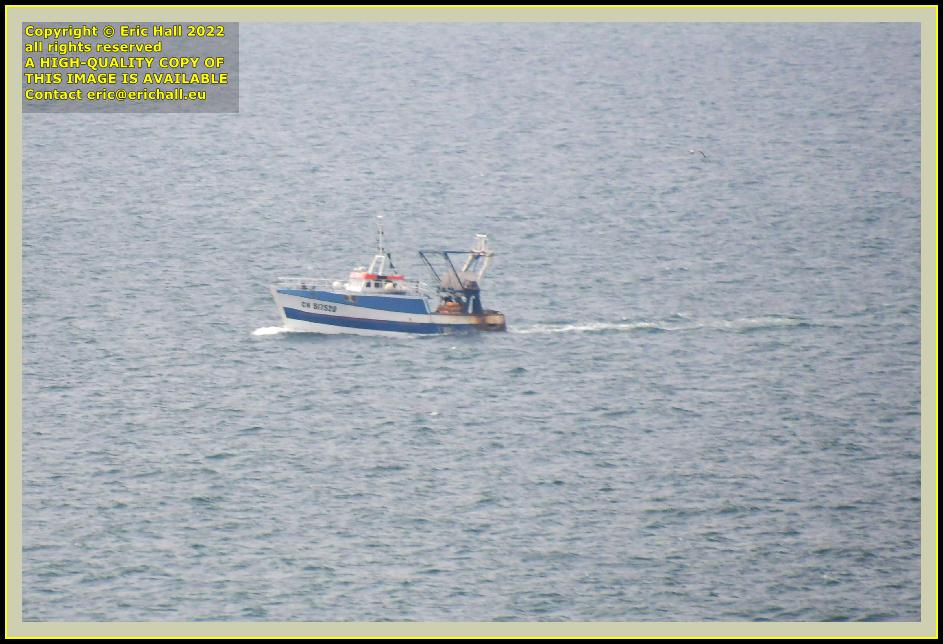 Mind you, it was quite a turbulent night, as you can tell from thz amount of stuff that was on the dictaphone.

And after the nurse had been (because I had a blood test this morning) and I’d taken my medication I sat down to transcribe everything.

I was looking at apartments and houses last night. There was some kind of robot thing that went through them while I was looking at them, and put them up to let. It seemed that every time I wanted to buy a place it was miraculously transformed into a letting property. The noise that this robot thing made when it roamed through these houses and apartments was really annoying. I couldn’t find a single property to buy without being overwhelmed by this. When I tried to sell a place, again I was overwhelmed by this kind-of robot thing that came along. It was the same with water. I couldn’t have water at the right temperature. It was either too hot or too cold even when there were two different sets of mixing taps draining into a sink. I couldn’t get the water temperature to be right. This thing with these apartments was really stressful in this dream. 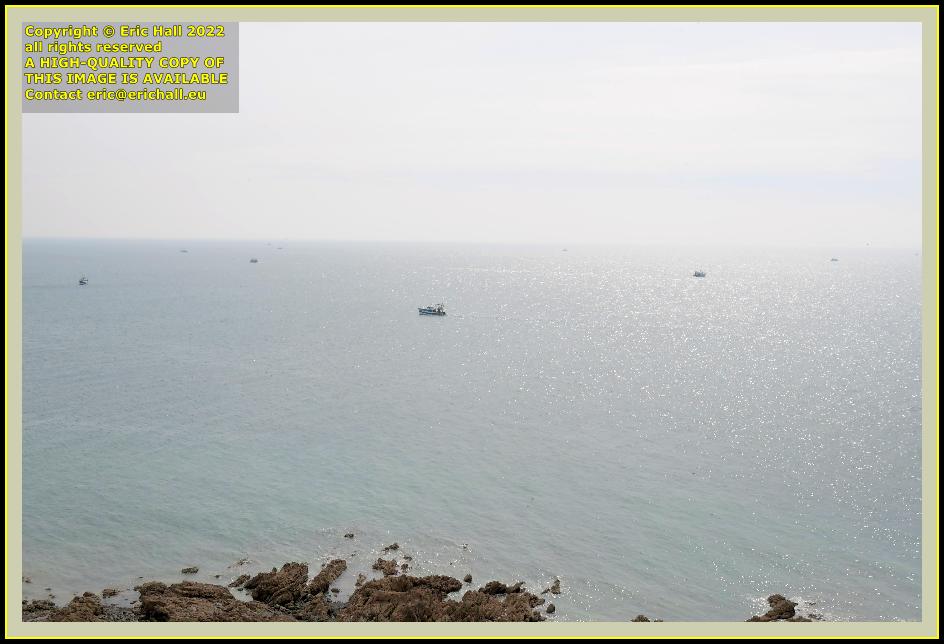 Then we were back on that ship yet again … “which ship?” – ed … but in an aeroplane now. The little girl and 2 other people on board had hi-jacked it and were preparing to sail off somewhere peaceful where they didn’t have to worry about being kidnapped again

Back in that dream yet again and there were Portuguese waiting down the road for that girl, to ambush her. This brought me on to I was actually at someone’s house when someone pulled up outside. The guy looked out of the window and said “Oh God it’s him”. I asked what had happened. he said that he had picked up someone at the docks when he’d come back over from Europe and was taking them home. When they arrived at a motorway interchange this guy had proposed going one way and the other guy proposed going a different wayto reach where they were going. This had led to something of quite a dispute between the 2 of them, quite a bit of bad feeling. When they met again outside this bungalow they explained the situation. I said that when one is used to going a certain way for 15 years and someone comes along and says to go another way it’s always something of a challenge. They gradually eased the situation between the 2 of them. 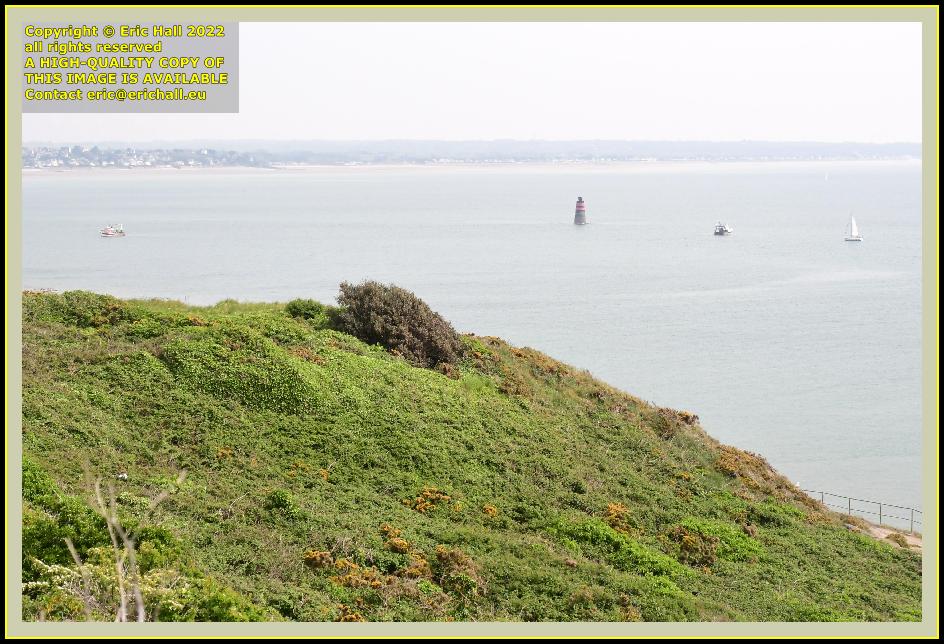 Finally; we were in North America somewhere. We were standing by this railway line watching these 2 girls running across some land and ended up running to this railway line. Whoever it was who was with me we both looked at these girls but we didn’t recognise them at all. We couldn’t think of why they would want to come to this railway line especially in the fashion that they had done running flat out like that.

So as you can see, the fact that I went the whole day without being tired is something of a miracle.

Another task that I needed to do today was to book my appointment with this Sports Therapist person. So I rang them up and that’s arranged for Thursday 12th May. a moment of destiny amongst so many others, one might say. 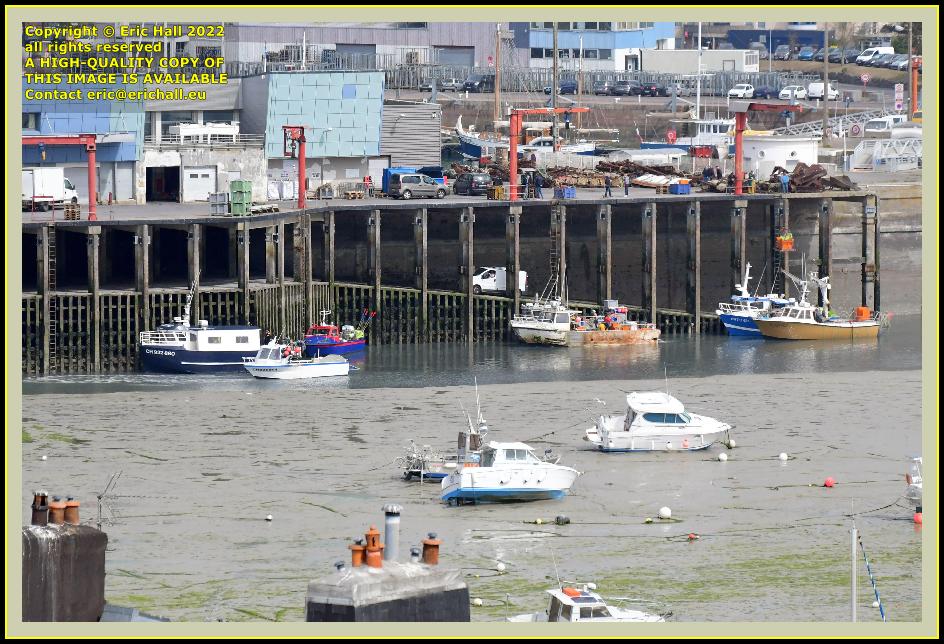 What I have been doing for some (and by no means all) of the day is to do what I should have done a while ago and updated the notes from when I was in Leuven and Kôln.

It completely slipped my mind that they needed editing and so I made a start. And I actually completed one day before I ground to a halt again.

That was because I had been set another task, presumably to prove that I am worthy, as AS THE OLD SAYING GOES

. I need to produce an entertaining itit – init – itinin – initit – timetable for the weekend, seeing as I’m the only one who knows where I’m going (and even that is doubtful).

Anyway, that is all done and dusted now – three days of riotous fun and high living – I don’t think. But there are some hot cross buns going spare if I behave myself, but really there’s little chance of that, isn’t there? Especially considering who else might (if I’m lucky) be there.

There were the usual breaks for breakfast, coffee and lunch. And then, of course, the walk around the headland to which I referred earlier. 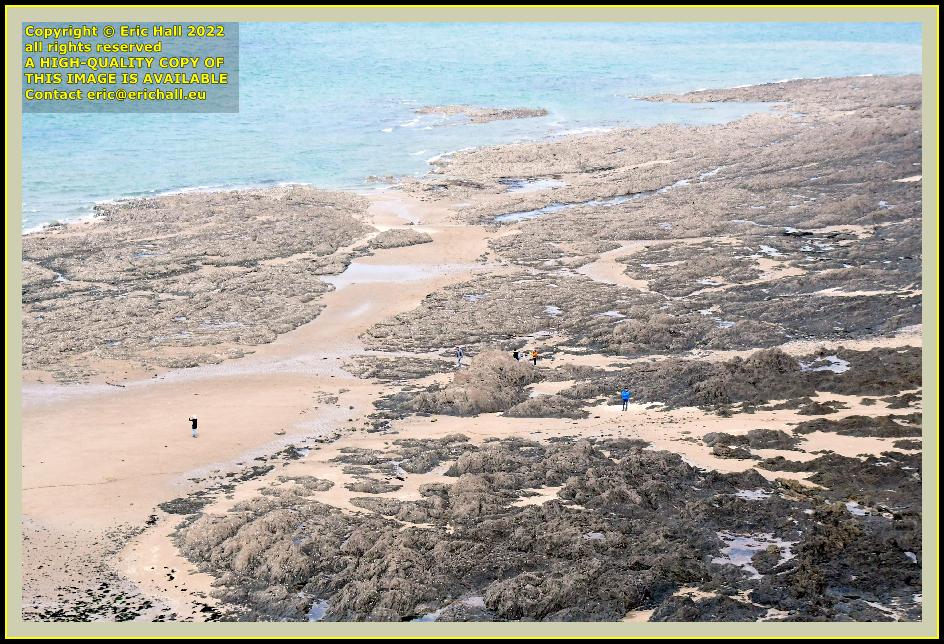 And first of all, as usual, is the wander across the car park to look down over the wall to see what was happening down below on the beach.

And as the weather was so nice and there were crowds of people and parked cars all over the place, I expected the beach to be quite busy. And I was right too. There were probably a couple of dozen people down there.

There was quite a bit of beach as well. The tide is on its way in though so it won’t be like that for much longer. You probably gathered that from the crowds of fishing boats loitering around just outside the harbour waiting for the gates to open. 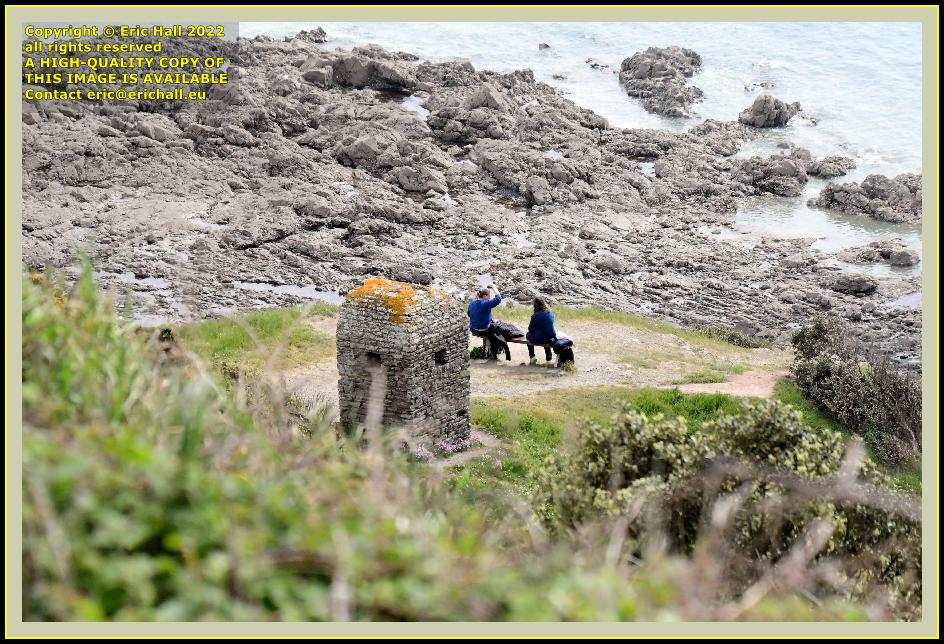 As I said, there were hordes of people milling around on the paths this afternoon. It was very hard to keep some kind of distance, even more so as I seemed to be the only person out there wearing a mask.

There were a couple of people down there on the bench by the cabanon vauban watching the spectacle going on out at sea because it’s been a long time since I’ve seen so many boats out there waiting for things to happen.

So while they were waiting for things to happen I headed off down the path on the other side of the headland to see what’s happening there – if the multitudes of people would let me pass by. 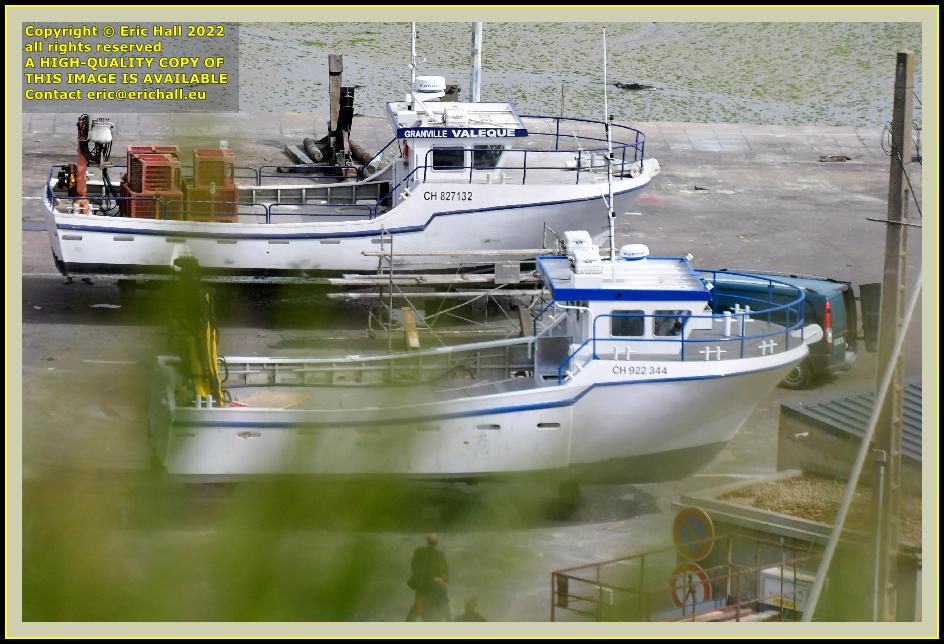 When I arrived at the viewpoint overlooking the chantier naval I noticed that there’s a new boat in there.

Le Roc A LA Mauve III looks as if she’s put down roots. She’s still there after all this time. But down there with her is another shell-fishing boat.

She’s carrying registration number CH857132 and that’s not in my list of boats so she must also be new to the area. Luckily I can see what I think might be her name and she may well be called Valeque.

Lots of boats in the outer harbour today as you have seen but it’s impossible to say who they are at this range. 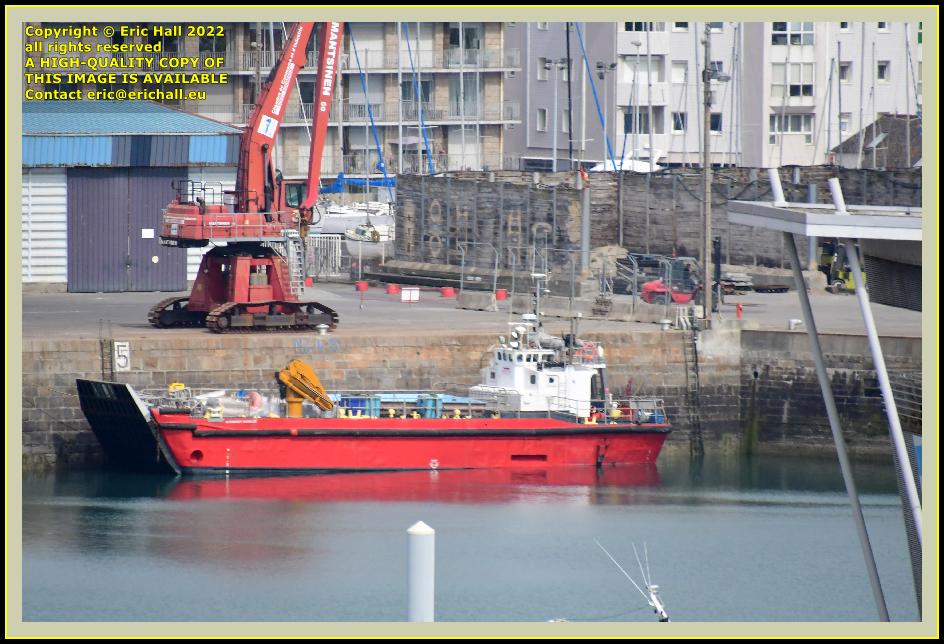 But we all know who this is, moored up at the loading bay in the inner harbour.

She’s one of two boats, and the fact that she doesn’t have that raised deck at the stern behind the bridge tells us that she is in fact Normandy Warrior, not Normandy Trader.

She must be in port to pick up the swimming pool that’s been on the quayside for a couple of days.

And the company that owns these two freighters is extremely busy. They are recruiting additional sea-going staff and there’s an advert doing the rounds. If only I had a mariner’s watch-keeping certificate I would be home and … errr … well, certainly not dry. 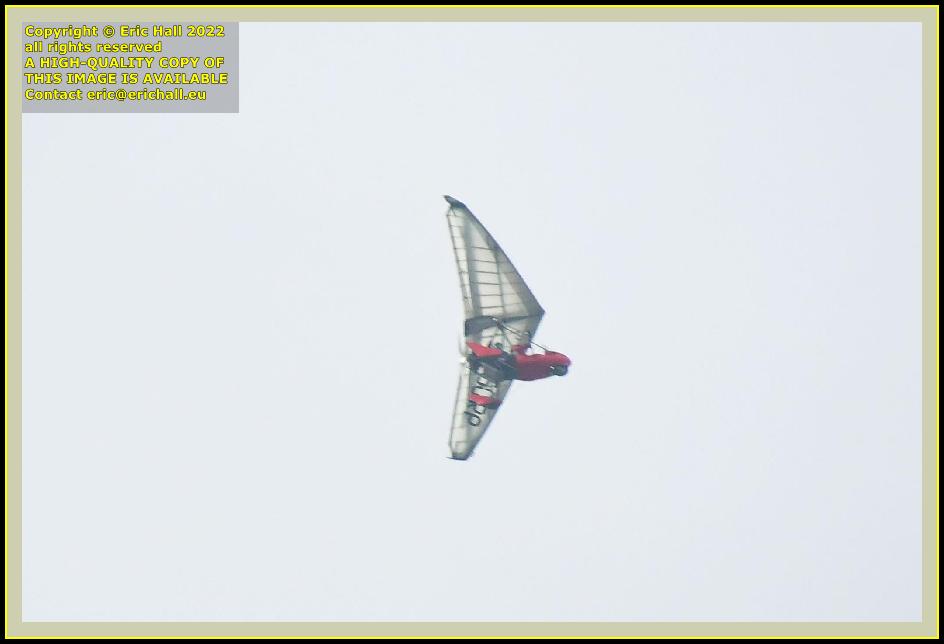 Before I went inside though I was overflown by the little red powered hang-glider thing or whatever it’s called.

It was on its way back from a trip down to Mont St Michel when it flew past me overhead. Luckily it didn’t have the same effect as the seagull did yesterday morning.

Back here I finished off my itinerary for the weekend and then went to make tea.

That sweet potato made lovely chips in the air fryer and I’ll do that again. Someone mentioned seasoning so I added a pinch of chili powder, a pinch of garlic salt and a generous twist of freshly-ground black pepper and that certainly added something to the mix. I’ll do that again too.

So now I’m off to bed. I have an 06:00 start in the morning, to which I am not looking forward at all. But as it’s the most important weeked for a good many years with a very crucial meeting, I have to do it.

What I’ll have to do is to nip out surreptitiously and hope that the butterflies in my stomach don’t notice.

Not that it’ll make much difference because if things run according to form and past history, I’ll make a mess of it. But nothing ventured, nothing gained.