… disaster I remembered to take that pill and decided that I would stay awake and work until I felt really tired.

The wisdom of that idea was quite apparent when it was 02:00 and I was still awake and at the computer.

No-one was more surprised than me to find that at 07:30 when the alarm went off I managed to fall out of bed. Definitely a case of “shaken but not stirred”.

And that became apparent when I came back in here after the medication where, settling down in my comfy chair, I went to sleep again. And that’s how I stayed until 09:00

Part of the morning, once I was properly awake, concerned organising the music again. I had to make a new playlist for one of my batches of music for a start, and then there was some sound files that needed chopping up.

There are dozens of those and the first one proved to be far more difficult than anyone might imagine because after the first 5 tracks, the rest of it doesn’t go in accordance with the running order that I have. In the end after much binding in the marsh, I abandoned that and did three different ones.

That leaves me with about 30 to do. A mere bagatelle.

Something else that I’ve been doing is to run through another pile of photos from th High Arctic in August 2019. And if anyone thinks that they are having problems with prices in the shops these days, then HAVE A LOOK AT THESE in Qikiqtarjuaq, an island in the Davis Strait between the far North of Canada and Greenland.

It’s this kind of thing that makes me glad at times that I don’t live in the High Arctic and I feel sorry for those who do. And my hat goes off to the girl whom I met in Edmonton in 2018 and subsequently on several occasions who threw up her life in Montréal to go and live among the Inuit on Baffin Island

We had the usual interruptions for breakfast (and my coffee machine, while not perfect, is a vast improvement on the old one) and for lunch. I even spent some time having a little sort-out in the kitchen.

But don’t worry – it was only a little one. These new pills aren’t working that well.

As well as that, I sent off an order to Amazon. I need a new course book for the next lot of Welsh lessons, and while I was at it, I ordered a new dictaphone identical to the one that broke down a couple of months ago.

It served me well for a considerable number of years and did exactly what it was supposed to do. Using the ZOOM H1 is too inconvenient when it comes to playing back. Of course I copy it onto the computer to listen to it but it needs a lot of enhancement in order to be able to hear it.

There was also a pause for a shower, and then I wandered off out for my rendezvous with the physiotherapist. 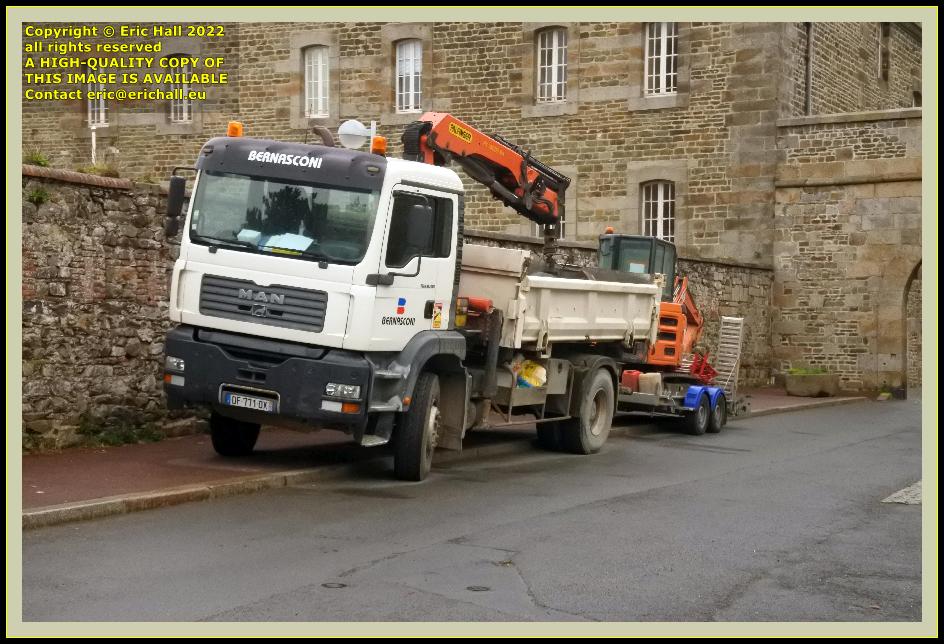 Regular readers of this rubbish will recall that we have seen quite often one of the main problems that arises when you live in a walled city – big stuff can’t pass through the gateways and has to trns-ship.

It has to stop here and the driver has to drive the digger off and through into the town under its own steam to get where it’s going and that’s not the work of five minutes either. But there’s no other solution unfortunately – at least, one that’s practical. 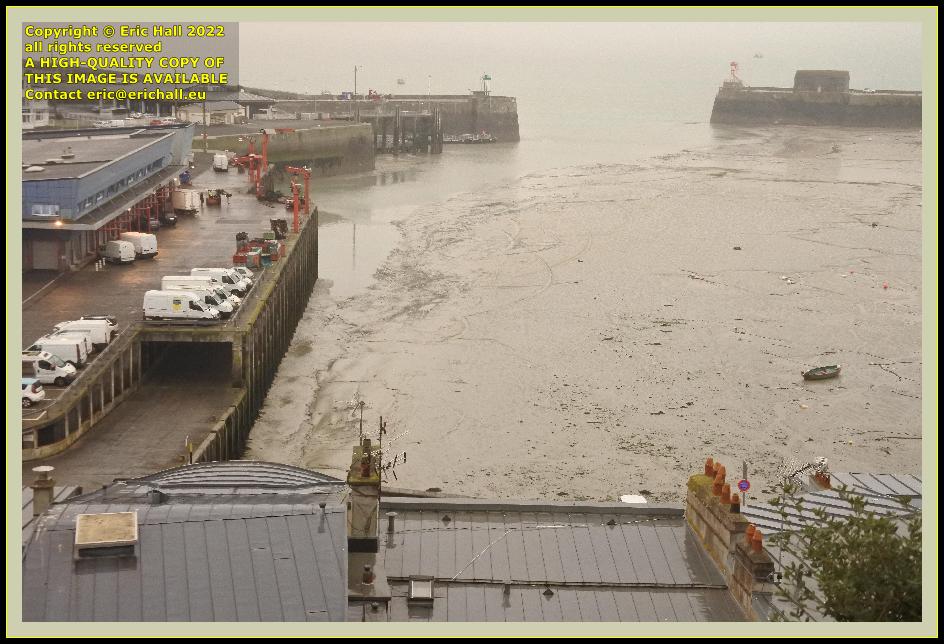 You didn’t notice it in the previous photo because I enhanced it but I’ve not enhanced this one, so you’ll notice the rather strange, eerie yellowy-green light.

There’s a dust storm blowing up from the Sahara and it arrived at my friend’s in Munich yesterday late afternoon. But now it’s arrived here and we’re having it. It’s certainly a strange effect.

However, returning to the subject-matter of the photo, the tide is well out at the moment and there are no fishing boats moored up at the Fish Processing Plant.

And there aren’t any ferries at the ferry terminal either. They must be all at sea this afternoon, just like I seem to be these days. But at least they’ll be back sometime soon, which is more that I will. 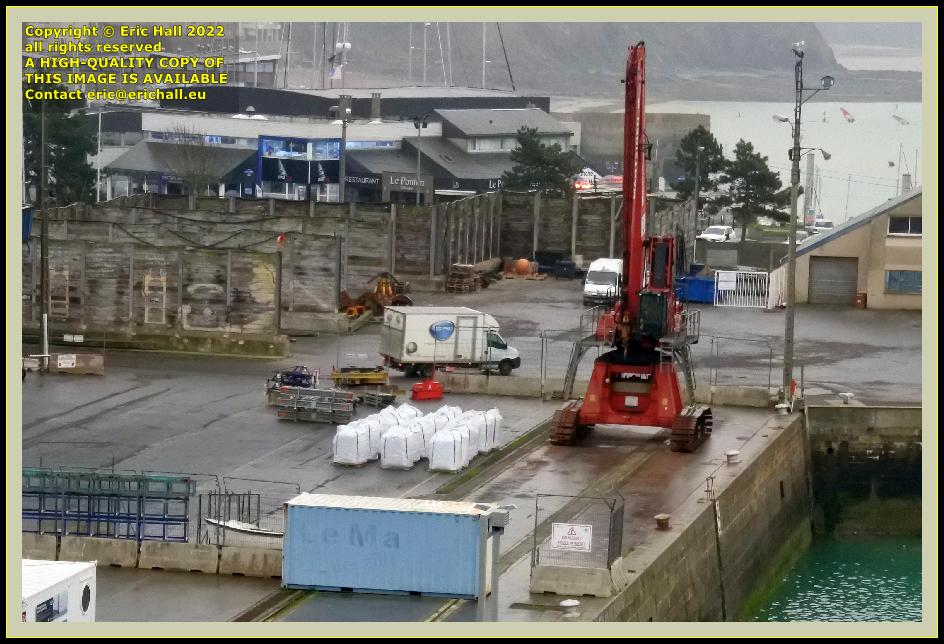 Meanwhile, down at the loading bay in the port there’s a pile of freight that’s accumulated on the quayside.

That tells us that one of the little Jersey freighters will be coming in within the next day or two to whisk it all away.

And no large masts in the harbour either. That tells us that Marité is still in Cherbourg having her annual check-over ready to start work for the summer season.

By now it was starting to rain – enough to dampen my enthusiasm but not enough to dampen the spirits of the boulonauts who carried on playing. It’ll take more than a torrential downpour to stop them from playing. 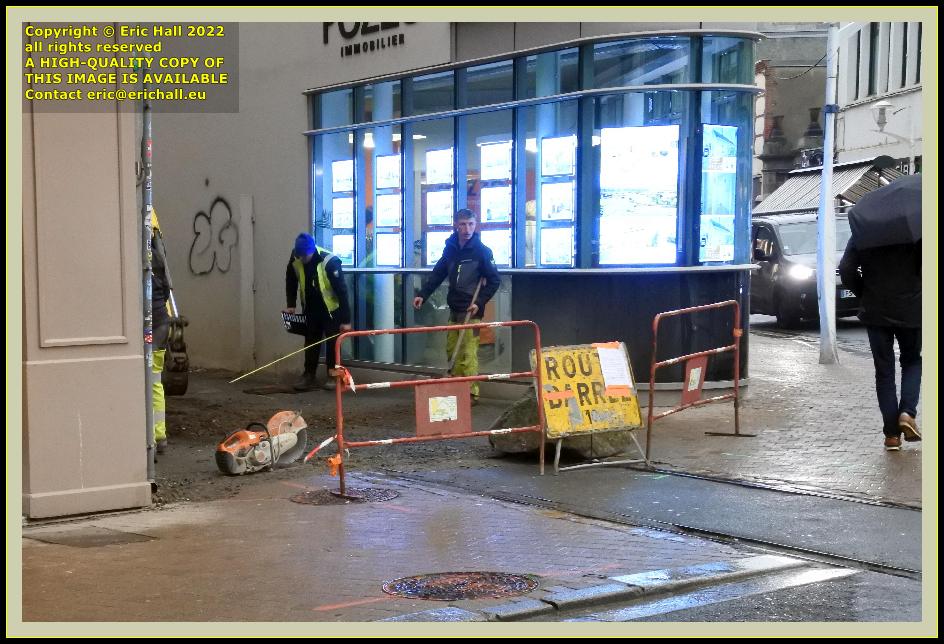 In the town centre we had yet more activity taking place.

That’s the site of the old railway branch (you can still see the rails) that used to go to the cold store where they used to keep the cod that the trawlers brought into port when fishing on the Grand Banks of Newfoundland was still undertaken.

Nowadays it’s a short-cut for pedestrians but at the moment it looks as if they are resurfacing it. I wonder what it will look like when they finish it.

The walk up the hill to the physiotherapists was just as good as it was on Monday. And once more she had me on the couch massaging my patella with her electric machine. And then I had some exercises to do.

But the knee doesn’t seem to be strengthening and the left knee now seems to be hurting. I hope that the doctor can see something on the x-rays about which he can do something. 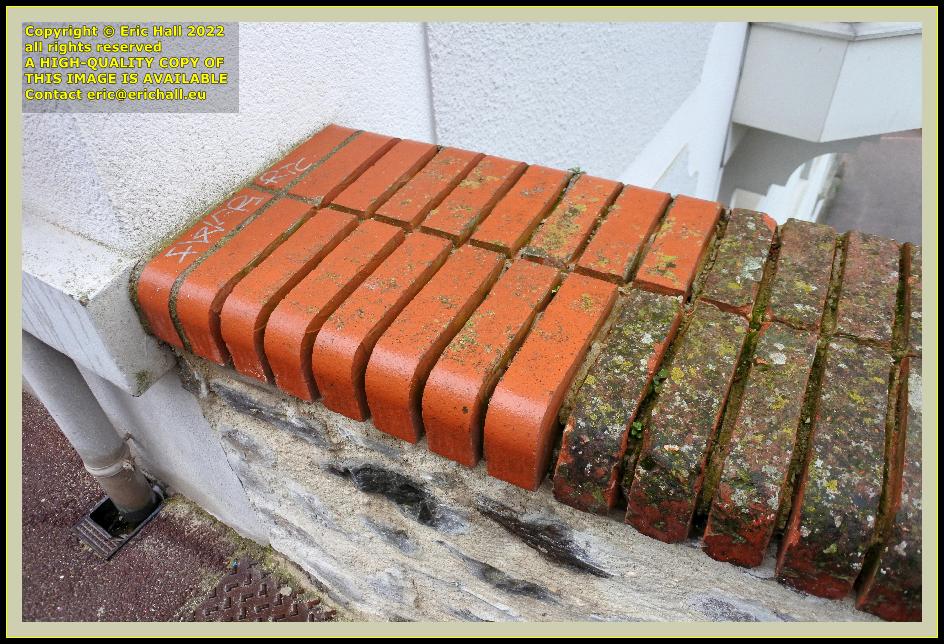 With the rain still pouring down, I walked through the completely deserted town centre and back up the hill in the Rue des Juifs towards home.

When I reached the place where they had been repairing the wall, I had a look at the brick capping that they put on top a good few months ago.

There is still no pointing in between the bricks and the moisture that will penetrate will destroy the capping if there’s any frost to freeze it.

Mind you, by the look of things, winter is a thing of the past. As I have said before … “and on many occasions too” – ed … we haven’t had a winter this year, and it doesn’t look as if we’ll have another one ever again at the rate that things are going. 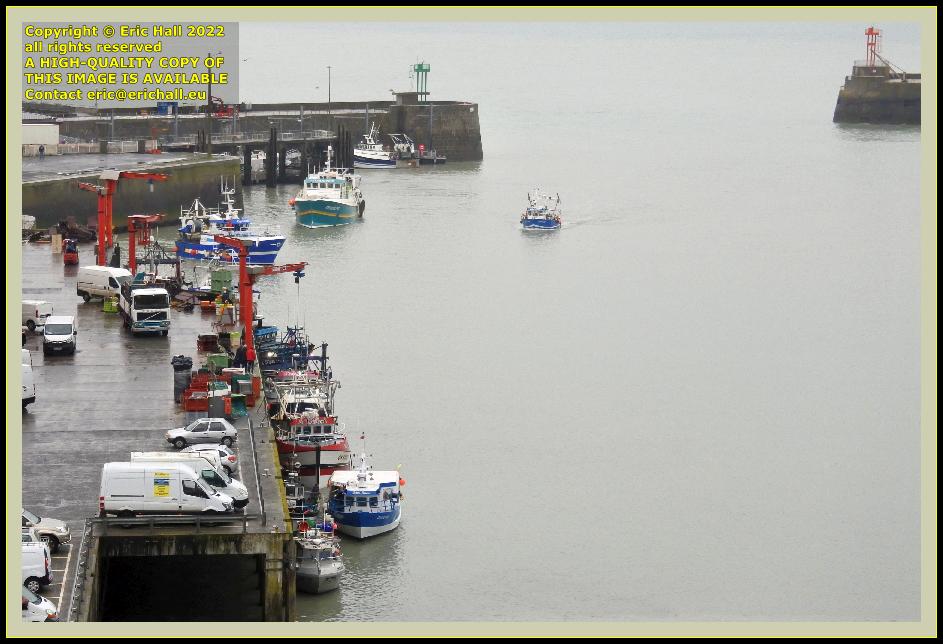 By now, the tide is much further in.

A big bunch of the smaller boats with shallow draught is down there at the Fish Processing Plant, all unloading their catch with the various vans and lorries of the owners waiting to take away the harvest.

Behind them, a few of the larger ones are waiting for the gates into the inner harbour to open so that they can go in. We can of course recognise Coelacanthe, the green and white trawler with the gold stripe.

There is even a trawler moored up at the ferry terminal out of everyone else’s way as the rush begins. 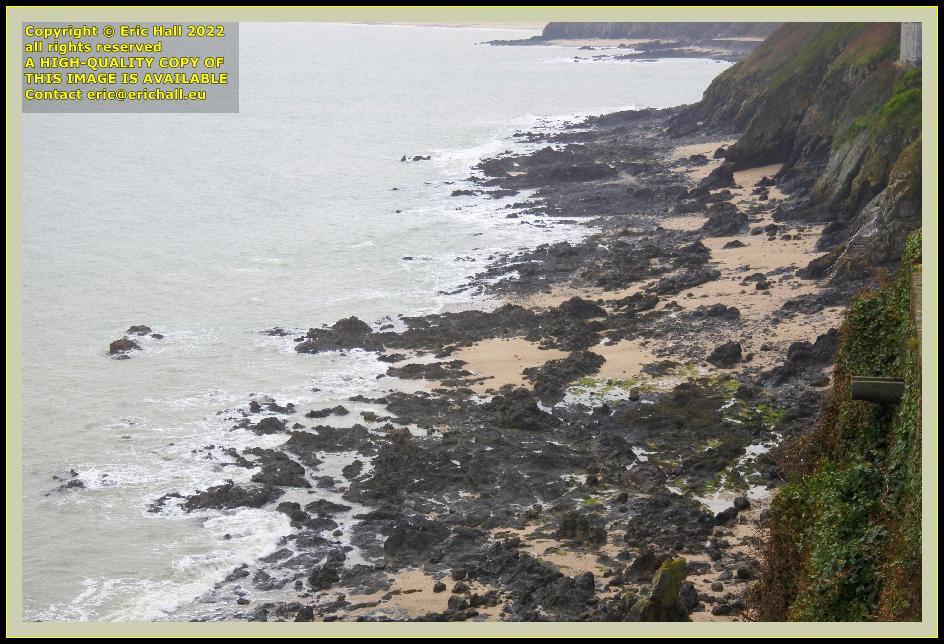 With the rain that was falling, I was all ready to rush home. But there was one thing that I needed to do first.

But it didn’t really matter because there was no-one down there on the beach. And that’s no surprise because I wouldn’t have been out there in this weather had I not had to.

Back here I made myself a coffee and then had a listen to the dictaphone.

War had broken out so they were arming the island on which Zero lived with battleships and things like that. My father noticed and made some kind of comment and I replied but I can’t remember what I said but it was basically to do with the fact that we are all in this together. And here’s another voyage in which Zero was involved and I can’t remember how or why. What kind of state is this to be in?

Later on, everyone was getting their stuff out ready to welcome the Ukrainian refugees. One lot that was to come hadn’t come so the people who were waiting to show them their way threw all of their paintwork and the Ukrainian flag into the hedge back on someone else’s land. This caused a lot of problems and they had to prepare the stuff again. It turned out then that someone still had the stuff wrong even though the gates were now open. They were going around in yellow and blue even though they had nothign to do with the situation in the Ukraine.

Finally I was with my brother and someone else. I was supposed to be going outside but it was raining. I took some hot water with me anyway and poured it into the bath but I just lay down and curled up under a blanket or quilt any old how. I wasn’t interested at all in anything. The water was going cold and I was asleep under this quilt. The 2 of them walked past so I gave them a wave and curled up back underneath my blanket again. A little later I was climbing up this hill. There were loads of buses and coaches full of all kinds of children heading down the hill. It looked as if it was like a Sunday School outing or something. I got to where I was supposed to be going. I had some clothes baskets with me. I was going to do someone’s washing. I put down the baskets and the dog moved them so I told it to bring the baskets back. To my surprise, it did. That was quite amusing for both me and the woman who owned the dog when she realised exactly what had happened.

There was no tea tonight as I had the first of my 5 revision lessons. Instead I grabbed an “unlabelled” frozen pie out of the freezer, defrosted it and warmed it up. To my surprise it turned out to be a vegan lentil pie. There are two more slices of that in the freezer so now that I know what they are I’ll have another tomorrow with potatoes, veg and gravy.

The Welsh lesson was something of a disaster. We were 14 students and the aim was to put us in pairs to chat about topics that the tutor gave us, and then to swap around after 20 minutes. And I’m just dismayed about how much I don’t know and how much I’ve forgotten.

Now i’m off to bed. I have two days with no interruptions so I need to get a move on and hope that no-one interrupts me and I can crack on with work. After last night, I need a good sleep.

If you aren’t tired, you can WATCH THE HIGHLIGHTS of last night’s football. And there was so much that they have cut out half of them, which is a shame.