… nice break on my journey today.

My route brought me through the city of Luxembourg so I telephoned my friend Malou. We met in the city centre and went for a drink and a chat for an hour or two. It’s a long time since we’ve seen each other so it was good to meet up and have a chat for a while.

Nevertheless I staggered out of bed as the alarms went off, tired as I might have been, and did some of the outstanding paperwork.

There was something on the dictaphone too. For some unknown reason we had been discussing tanks during the night. We were in a big one, the idea being to spray several other tanks with machine gun fire to find out how flammable they were and to see what the chances were of setting other tanks ablaze with just simply machine gun fire reaching vital parts or breaking fuel lines kind of thing

Breakfast was interesting because the landlady insisted on talking to me. We had a delightful conversation in a mixture of German and English that went on for almost an hour. 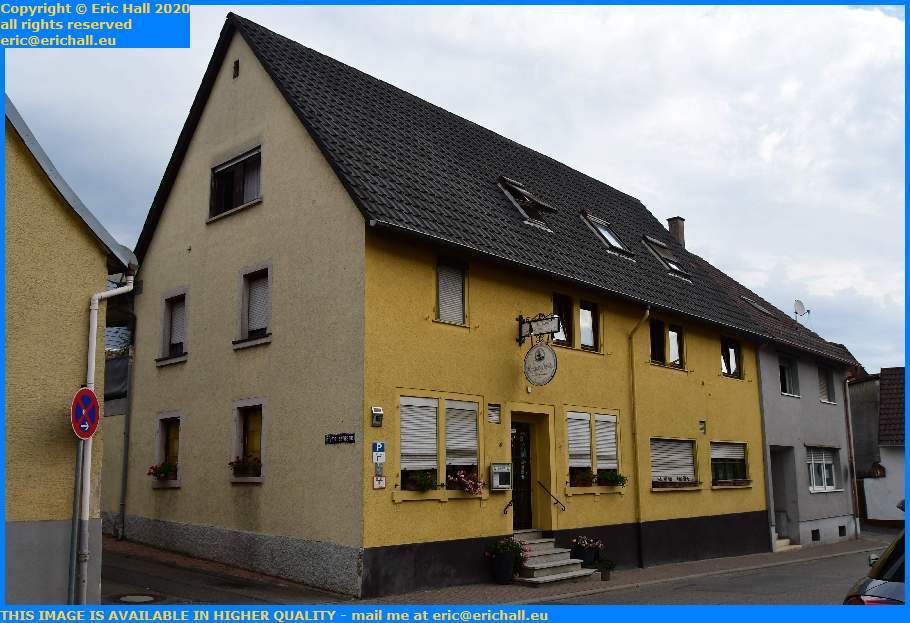 Thinking on, I’m not too sure if I’ve mentioned my hotel.

It’s the hotel Kraichgauidylle in Malsch, the correct Malsch of course, and is one of these typical Germanic small village hotels that you encounter all over Central Europe. Somewhat tired, dingy and dark as if it was a throwback to the 1930s but while the price wasn’t a 1930s price, it was pretty good value for the money that I paid.

In fact, being on the Budget Economy plan that I am, the proof of the issue is “whether I would stay here again at the same price” and that emits a rather positive response.

The only issue was the lack of on-site parking. But arriving late and leaving early meant that I could use the parking space of the bank across the road without any problems.

On the road, the lack of sleep caught up with me before I’d gone too far and I ended up asleep in a car park for a couple of hours. It’s a long time that I’ve done that, isn’t it? Just like old times in Canada.

The bridge that I was intending to take across the Rhine was closed and I was obliged to take a detour to another bridge. 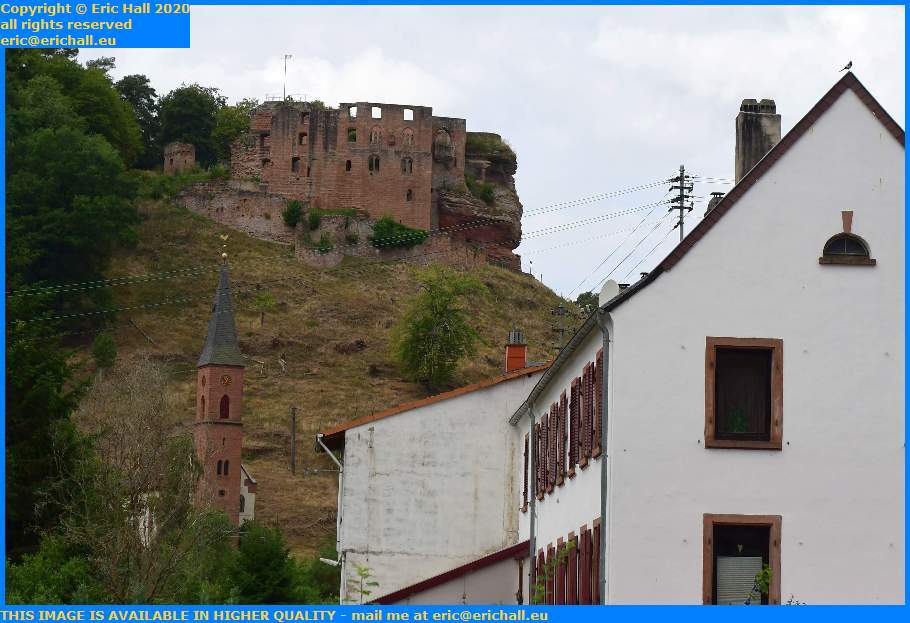 From there, through yet more roadworks and traffic jams, especially in the town of Kaiserlautern, I pushed on into the Eifel Mountains past the Castle Frankenstein.

One of those places where you have to stop and take a photo, even if you do have to drive around for ages and perform several U-turns in order to find a place to park where there’s a good vies

It’s not unfortunately the castle of Mary Shelley’s Frankenstein – that’s out near Darmstadt – but its etymology is the same, to wit, the stone (building) of the Franks, the tribe that occupied western Germany and eastern France in the early Middle Ages

The existence of this particular castle is first recorded in 1146 and is believed to date from some 50 years earlier according to some contemporary reports. Its purpose was to guard the road between Speyer, Dürkheim and Worms, presumably for the security of pilgrims and religious officials, and was owned by Limburg Abbey.

Severely damaged during the various wars of the 15th and 16th Century, it was finished off during the German Peasants War, a revolt that led Martin Luther to state that the peasants “… must be sliced, choked, stabbed, secretly and publicly, by those who can, like one must kill a rabid dog.”.

By 1560 it was reported as being destroyed. 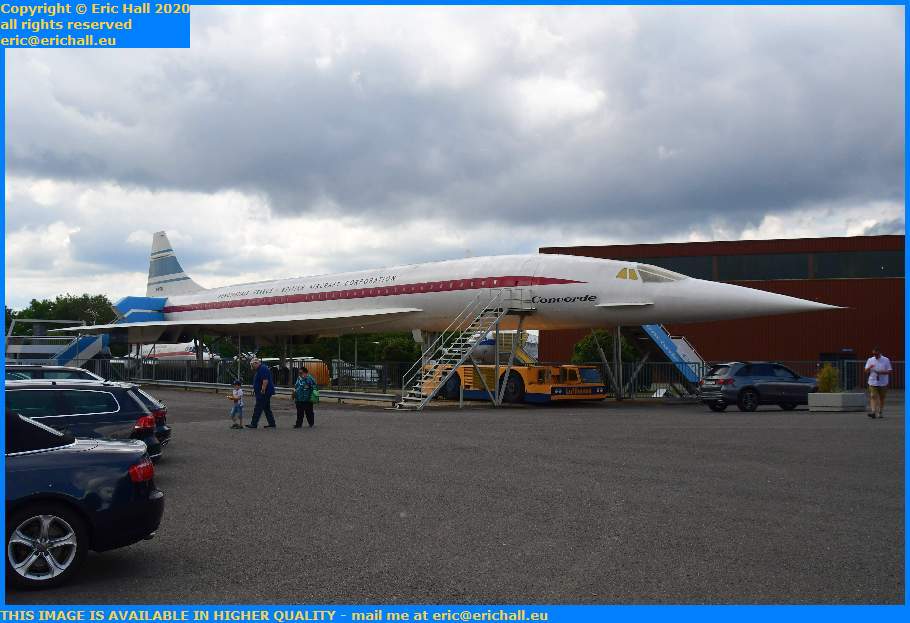 Continuing onwards deep into the mountains, I came across an air museum with 20 or so aeroplanes on display outside, somewhere near the towns of Hermeskeil and Habersberg.

What actually caught my eye was the Concorde here so I had to do a U-turn and go back for another look. However I didn’t stop for more than a second or two because right at that moment we were having a torrential downpour outside – something akin to what we had on the previous day and I wasn’t getting out of Caliburn in that. A quick photo would have to do.

But it’s another one of these places to which I’ll have to return, even if the Concorde here is only a replica, as I was to find out later. Never mind 20 or so areoplanes, there are in fact well over 100 and not only that, there’s a railway museum nearby with a shed full of steam locomotives. 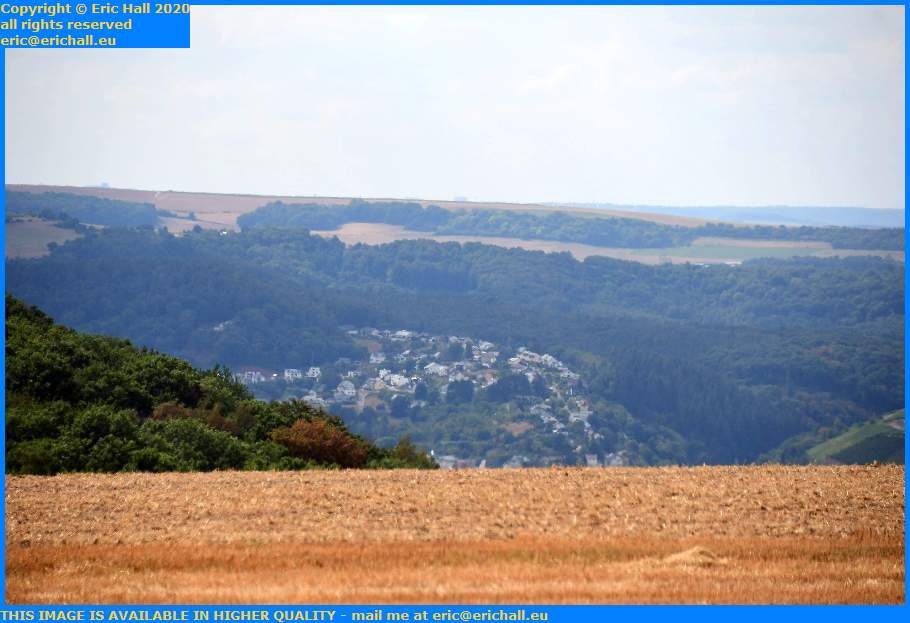 The weather started to brighten up very slowly as I pressed on further into the mountains. And as I crested a rise at the back of the town of Vierherrenborn, I stopped in my tracks to admire the beautiful view.

Where I actually am is at the top of a range of hills that form the eastern shore of the Saar River, one of the tributaries of the Moselle which it joins a few miles further north near Trier.

246 kilometres long, it was a vital industrial route of Germany in the late 19th and early 20th Century when this region was one of Europe’s leading iron*producing areas, bringing raw materials in and taking the finished product out. 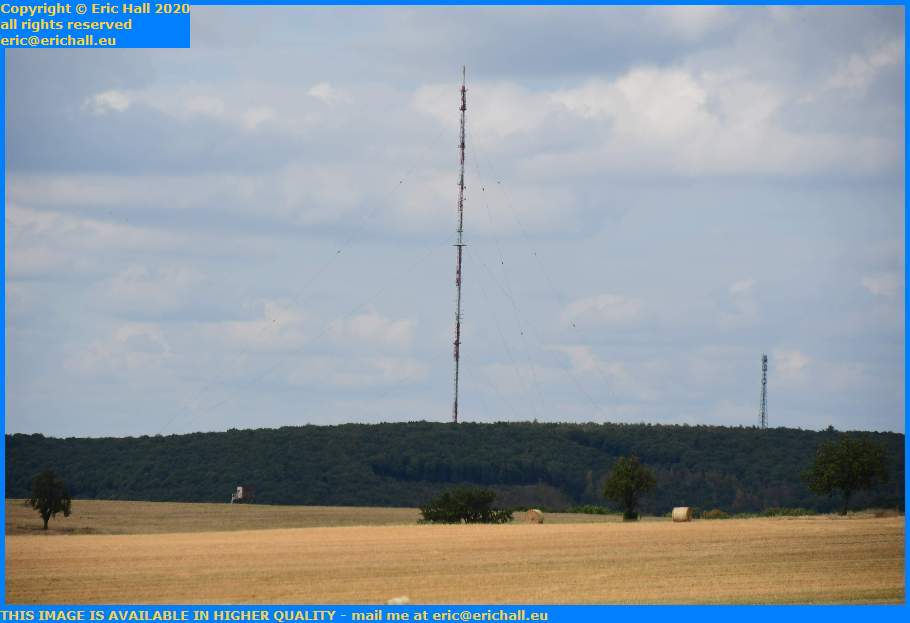 Behind where I’m standing is what at first glance appeared to be similar to the Loran C masts of which we saw more than a few ON OUR TRAVELS AROUND NORTH-EAST CANADA.

However this one probably isn’t. It’s probably nothing more than an ordinary radio antenna – if “ordinary” can be used to describe an object quite like this one. I was rather hoping that it might have been the “Eifel Tower” – in actual fact the Sender Eifel – the tallest structure in the Rhineland-Palatinate at 302 metres, but that’s about 60 miles further north at Kirchweiler

So whatever it is, I shall have to continue to make enquiries 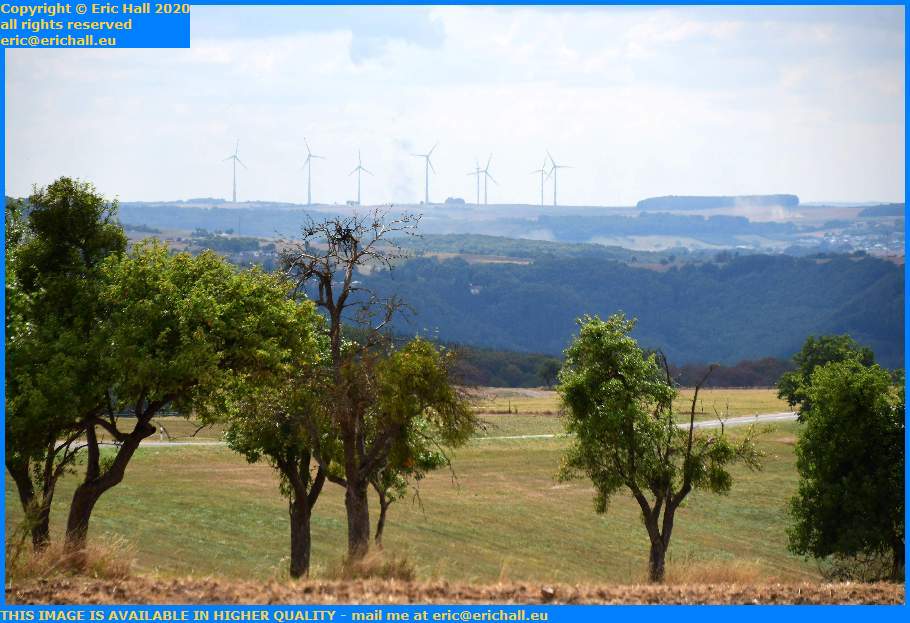 These objects are much easier to identify, because we have seen plenty of them on our travels around here and there.

Across the river over there – brcause the river is just down there in that velley in the middle distance – is one of the highest points in this particular region, a mere cockstride from the border with Luuxembourg, right in the path of the westerly winds.

Consequently it’s obviously going to be a prime candidate for a wind farm, and quite right too. Regular readers of this rubbish will recall that I’m all in favour of windfarms, having lived for many years with three wind turbines. 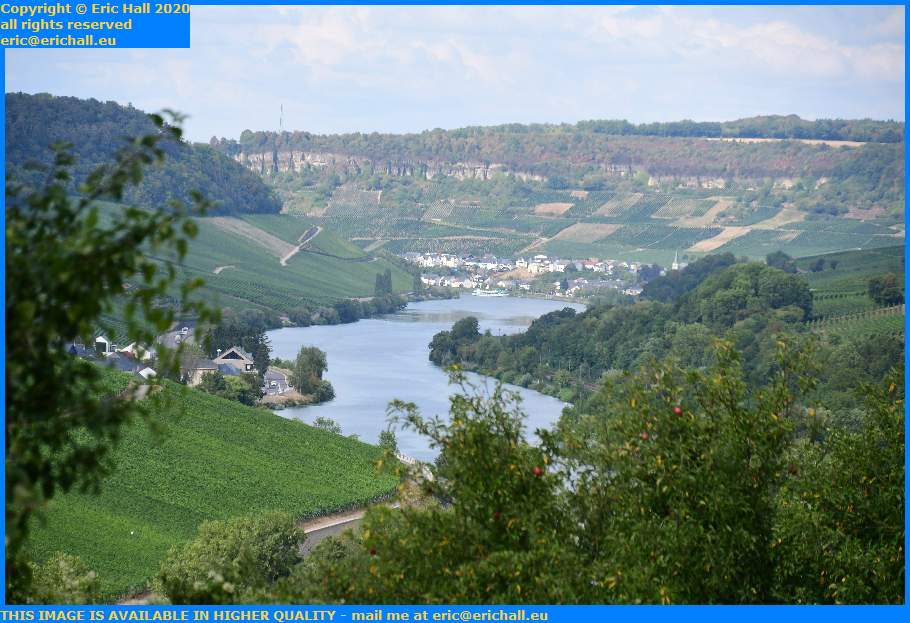 Talking of westward, I’m going west, aren’t I? Continuing along the road towards the border with Luxembourg myself.

It’s a really beautiful drive through this part of the Eifel so I wasn’t in any great rush, but soon enough I arrived at the River Moselle, the “little Meuse”. To the left of this image is Luxembourg and to the right is Germany, for the river forms the boundary between the two.

The town down there is called Rehlingen, a town first recorded some time in the middle of the 12th Century but lost its autonomy in 1974 when its administration was absorbed into that of neighbouring Nittel. 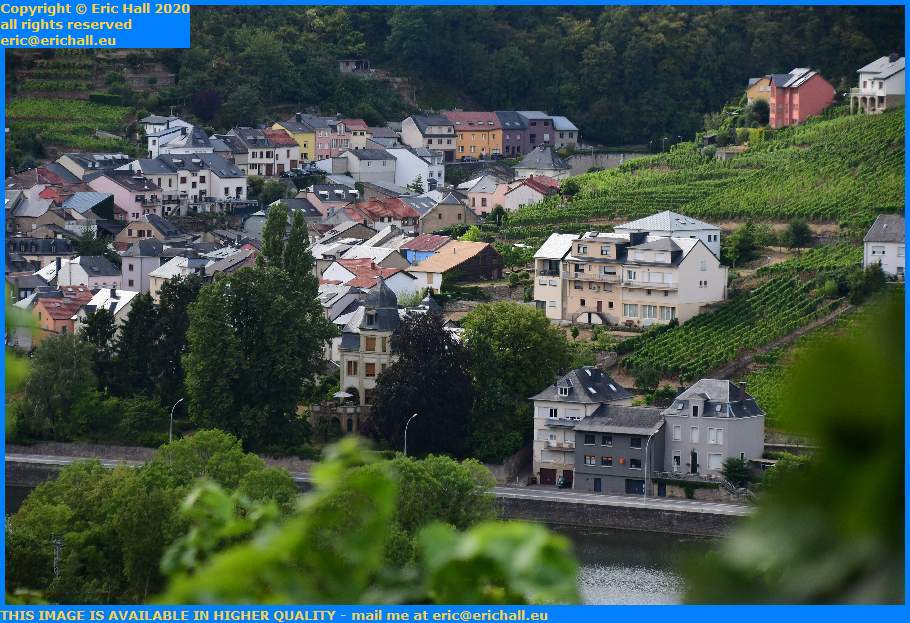 Over there is the town of Wormeldange, in Luxembourg and it’sdown by there that we will be crossing over the river into Luxembourg by means of the bridge that links it with the German community of Wincheringen, where I am at this moment.

Lovers of wine would love to come to visit Wormeldange because it’s one of the more important centres of production of Reisling and there are 360 hectares of grapes to have a go at.

But not for me though. Apart from a beer, which was all that there was to drink when we were stranded in a snowdrift half way up a mountain while skiing in Romania one year, I haven’t drunk alcohol for 30 years or so. And in any case, I have an appointment to keep and can’t spare the time to stop.

Into Luxembourg City to find a parking space, and Strawberry Moose received a wave from a friendly pedestrian.

Having found a place to park, I met up with my friend Malou. We had studied together at University all those years ago and still keep in touch. We’ve met up a few times while I’ve been on my travels but not in Luxembourg since about 2001. We went off to have a coffee and a good chat.

Having spent a pleasant hour or so with Malou I headed out of the city northwards in the vague direction of the Belgian border. 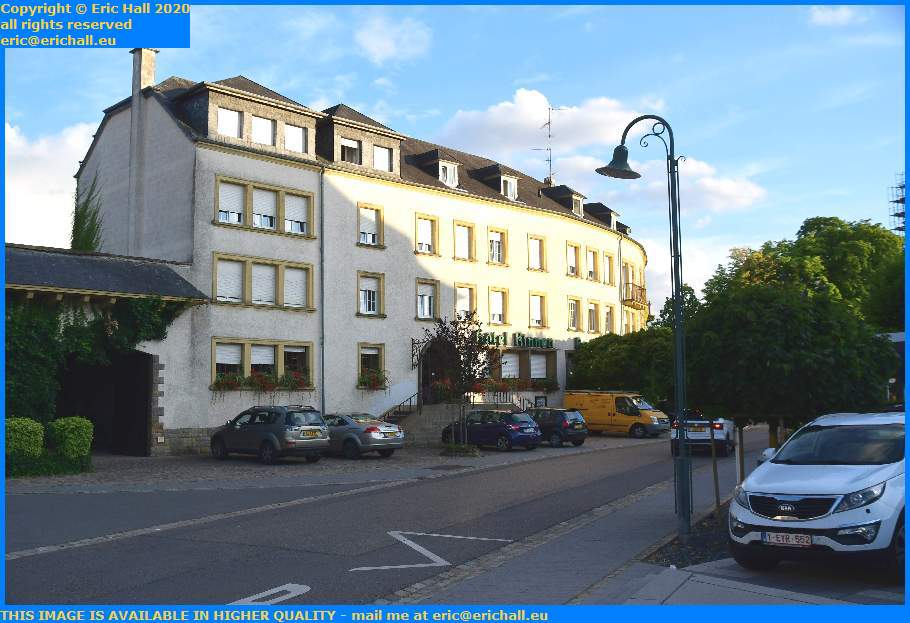 Deep in the mountains of the northern part of the country in the town of Berdorf, I ended up at my hotel, the Hotel Kinnen, in keeping up my tradition of spending a night in every country that i’ve visited.

This hotel is another place that has seen much better days in the past when Berdorf was the place to be. And it still has quite a few signs of its former grandeur. In fact, for value for money, it’s one of the best places in which I’ve stayed in Western Europe for quite some considerable time.

Walking around the town later that night, I stumbled upon a pizza place and prevailed upon the chef to make me a special pizza seeing as I hadn’t had one for a few weeks. Now I need some more vegan cheese.

Tomorrow I’m heading to Germany and Belgium. Well on my way home now. Looking at my notes I can see that I’ve already been out for three weeks and it’ll be four weeks by the time that I return home. I wonder if I can remember where it is.