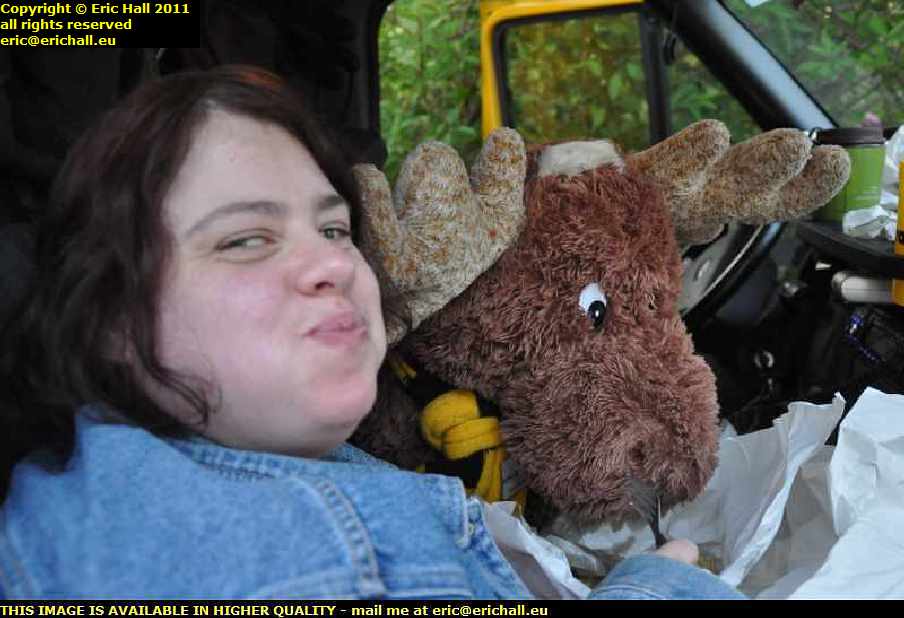 Here you can see him dipping into his Auntie Caroline’s cod and chips.

To pass the evening, I went to see Caroline again.

We ended up going out to the chippy (not half as good as a traditional Belgian fritkot), I have to admit, and that was where His Nibs joined in the (af)fray.

But Caroline’s cat Bigsy is very poorly and she might not pull through. I wanted to make sure that I saw her and gave her a stroke.

So after many vicissitudes, not the least of which was parking up for the night in a zone where there was no mobile phone signal (something that only I can do), I finally made contact with whatsername and, sure enough, my wallet was there.

That was just as well as I would shudder to have to think what I would have had to do had it not been there.

She was making breakfast for the family (it was quite early) I was also invited to eat there and that really put an end to my journey to Ilkeston and Vehicle Wiring Products, as they would have been closed by the time I would have arrived.

Instead I went to DK Motorcycles in Newcastle-under-Lyme.

As well as selling road-going machines the company also imports classic motorcycles from the USA. They arrive in all states of repair and I always like to go along if I can to see what’s arrived.

They had a few mint Hondas, including a couple of rare 1970s 350-fours as well as a pile of other stuff as well that was fit for renovation, including a 95%-complete Honda 160.

As an aside, I passed my motorcycle test on a Honda 160 belonging to my mate Ray Stigter.

Many of the machines that arrive there are only suitable to be broken up for spares and I always go to chat to the guys there because many of you might not know that I own probably one of the rarest of all Japanese motocycles – a CB92 “Benly” from 1961.

It’s basically complete and after we assembled it we even had it running after a fashion, but that was back in 1974 and that is a long time ago.

It desperately needs an overhaul but spares for it are impossible to find now – hence the regular visits to DK Motorcycles.

They might one day have one in that is only fit for dismantling but to date the guys in there freely admit that this is one motorcycle that they have never ever seen and don’t ever reckon that they will do either.

One regular feature of this blog in its previous incarnation was something to do with poorly-sited solar panels. 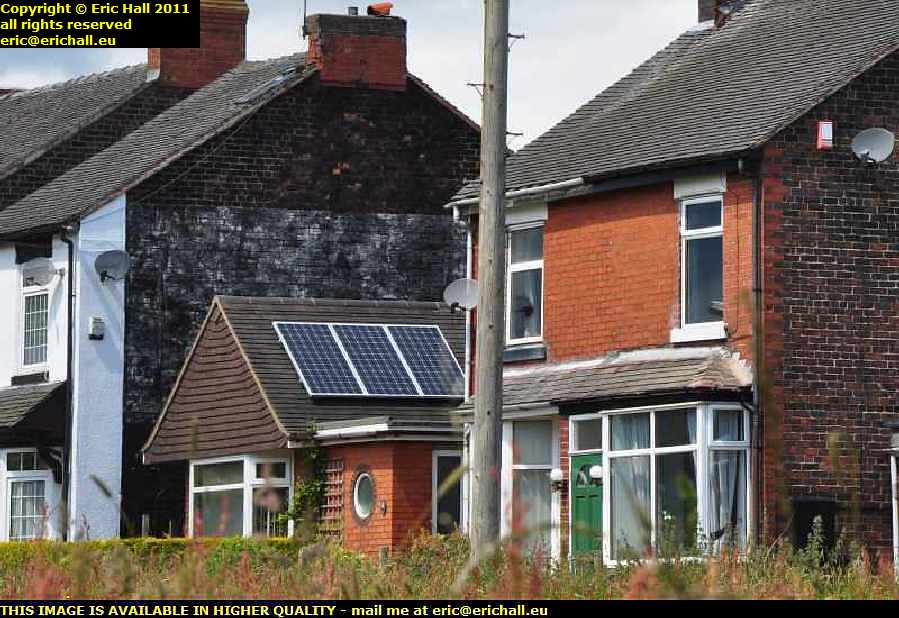 But we gave that up when we were overwhelmed with them. Some of these solar panel salesmen have no shame of course.

We’ve seen some dreadful ones on our travels in the past but this must be pretty near the bottom of the pile.

Lunch was at Waitrose in Sandbach and then I went to B&Q in Crewe to see if they had the doors that I need for my house. My house is dark and gloomy due to the small windows and if I’m putting partition walls in, this will cut the light down further. 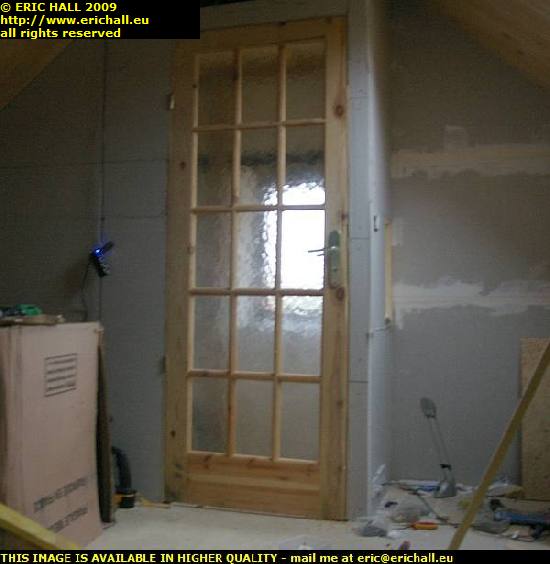 What I need is some dirt-cheap glass-panelled doors and finding them in France is impossible. However B&Q does a nice cheap line in exactly what I want.

The door that I fitted into the attic came from there and you can see what a good job it does as well – hence a requirement for another half-dozen to match.

B&Q came up trumps in more ways than one.

When you think about it … “you are always thinking about it” – ed … that’s just 20 weeks of rental on my mailbox paid off in one swell foop.

You can see why it’s important to have a UK address if I am buying stuff over here.

Now Caroline and I are having a coffee on Sandbach Services. In a short while I’ll be dropping her off at home and making my way in the general direction of Bacup.

I have to go to see a digger there tomorrow morning.

… it down this afternoon to see this boss of The One That Got Away who had been hankering after seeing me.

And the reason for my visit was quickly unveiled.

It seems that his company has won a contract to supply and fit out a new village hall on the Staffordshire Moorlands, and it all has to be off-grid.

Off-grid is not something in which they have any expertise and so it seems that I’ve been drafted in on this project as well.

I’m not sure what the payment might be, but “panels at cost” is a good inducement for me to become involved in it, if nothing else.

We then spent until some ridiculous time this morning catching up on all the old times that we knew when she worked for me as a kid back in the 1980s, and discussed everything that has happened to us since we last met quite a long time ago.

It was lovely to see her again after all of this time and I was sorry to leave.

Terry rang me up as well during the day. He wants me to go to look at a digger in Accrington or Bacup or somewhere like that tomorrow, and then I need to be in Ilkeston as well to pick up some stuff from Vehicle Wiring Products.

But I’m not going anywhere until I’m reunited with my wallet, which I hope is still at whatsername’s. If it isn’t I am going to be having more than just a few problems.

A blasted tractor wanted to get into the field across the entrance to which I was parked. First time for 50 years I reckoned, judging by the looks of the gate and the track down there, and it had to be today of course

And so I removed myself to another spec and set about tidying up Caliburn.

However I was interrupted by a phone call, and what a pleasant surprise this was.

Back 100 years ago when I had my taxis there was a girl who used to work for me on Saturdays answering the phone and so on to earn some pocket money. She used to draw the images for me for the humorous remarks that I made.

After I sold up, we kept in touch for a short while but then we lost touch with each other. Anyway, to cut a long story short … "hooray" – ed … these Social Networks have a lot to answer for and she has tracked me down.

She’s now working as the Financial Controller for a Renewable Energy Company in Newcastle-under-Lyme and she reckons that it might be a profitable encounter for all of us if we (me, she and her boss) were to meet up sometime for a chat.

Apart from that, it would be so nice to meet her again after all these years, and I am really looking forward to that of course.

I could do with a few profitable encounters, the way things are right now. It’s been a long time since I had any … "last night?" – ed … and so we are all going for coffee next Thursday afternoon

I’ve also been house-hunting for Percy Penguin this afternoon and it’s just like Belgium here
“Didn’t you see anything suitable in our window?”
“Well, if I saw anything interesting in your window there wouldn’t be any point at all in you working here, would there?

And with an attitude like that you may as well p155 off home because you won’t be in business for long”.

It seems that even with a substantial amount of cash at stake, there are still far too many people who cant be asked to stop talking and stop drinking coffee to deal with any customers.

No wonder the UK is going broke.