… exertions it was no surprise to anyone that I was in bed by 20:45. But the difficulty whenever I do that is that I’m usually awake quite early and so I never seem to take advantage of it.

But if anyone thinks that I’m going to be out of bed at 05:40 and doing things when there’s no alarm set, they are totally mistaken. Even 07:20 was rather early but there’s no point in staying in bed if I can’t go back to sleep

At 09:00 I nipped downstairs to the “Match” supermarket in the basement for my bread for lunch. And some drink too. I’ve already finished off the 1.5 litres of iced tea and 2 litres of banana-flavoured soya drink that I brought on Wednesday night.

Back up in my room I finished off my notes from yesterday and then had a listen to the dictaphone to see where I’d been during the night. I was with a couple of friends and we were discussing, of all things, rape. The girl said something like “rapists should all go on strike and down tools”. I replied that if all rapists downed tools, there wouldn’t be any such thing as rape at all. And despite the gravity of the subject, I was pretty impressed that I could come out with a pun like that while I was asleep.
Later on there was an issue about a socket not working. I immediately reckoned that there was a bad joint somewhere and the first joint that I tested came apart when I pulled it I was with a guy whom I knew so I asked him if he would hold a lamp at the socket while I held the wires togeter to see if this was the bad joing in question but he refused. I had to run off and try to find a light with a plug that would fit in the socket and try it myself.
Even later Rosemary was asking me about the Battle of Rhedae. I knew that it had taken place on the outskirts of Clermont Ferrand (which it didn’t – I was thinking of the Battle of Gergovie) so I went to fetch my Michelin guide to the Puy de Dome and had a good search through but couldn’t find it in there, which was no surprise seeing as Rhedae, which is these days believed by many to the the town of Quillan, is in the Razès in South West France. 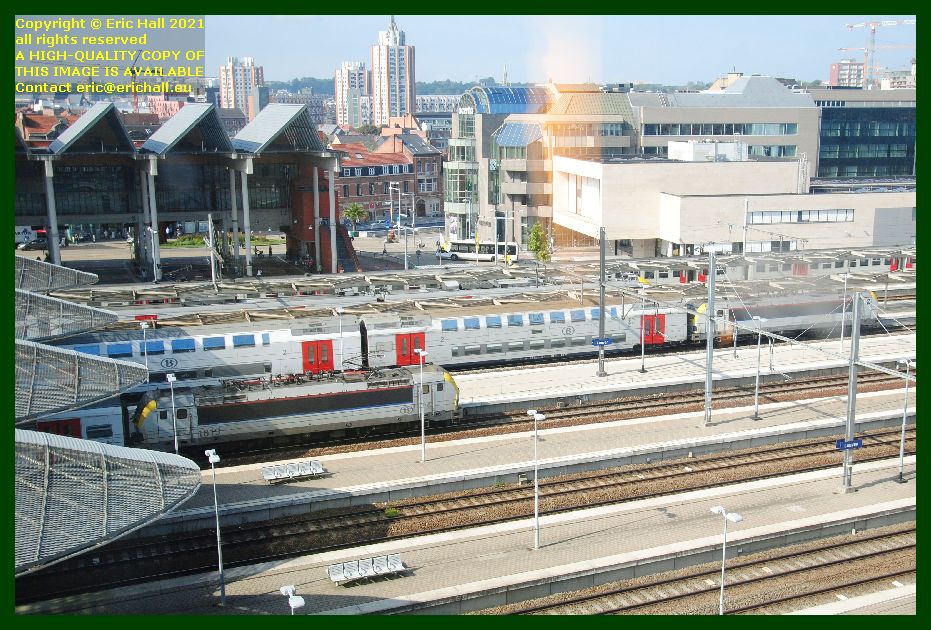 While I was busy working I was keeping an eye on what was going on outside down on the station.

At a certain moment a train from Oostende pulled into the station just as a train from Eupen and Welkenraedt pulled in on its way to Oostende. 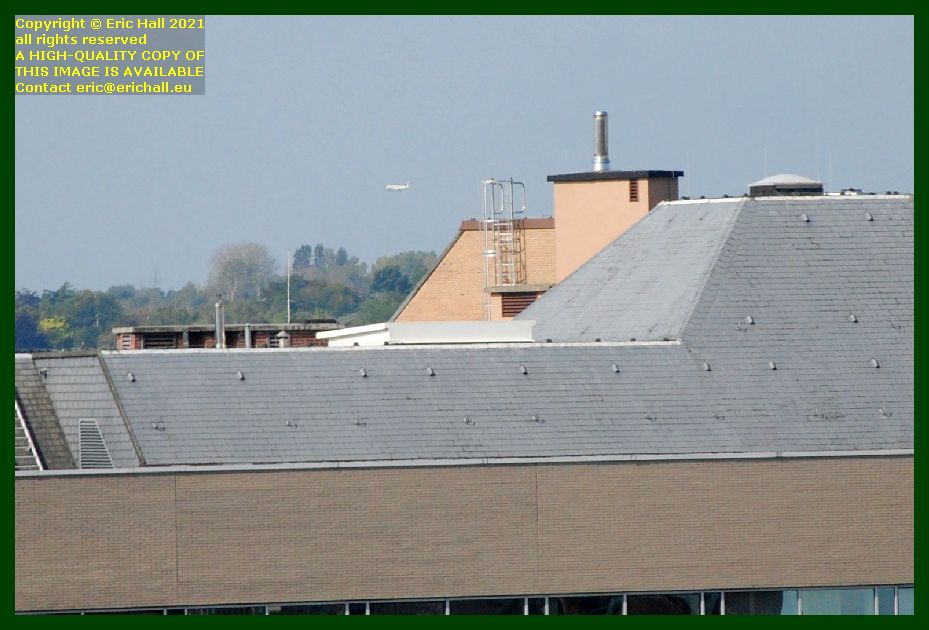 What else I could see from my window were aeroplanes flying from right to left just above the horizon.

Way over to the left is the Brussels National Airport at Zaventem. All of these aeroplanes are on the flightpath going into land there and there were quite a few too. At one stage I counted one every three or four minutes.

When I lived in Schaerbeek back in the early 1990s my apartment looked out right across to the airport way out in the distance and the aeroplanes that came in to land were clearly visible at night with their landling lights illuminated. They would come into land right in line head-on to my apartment and the view was fantastic. 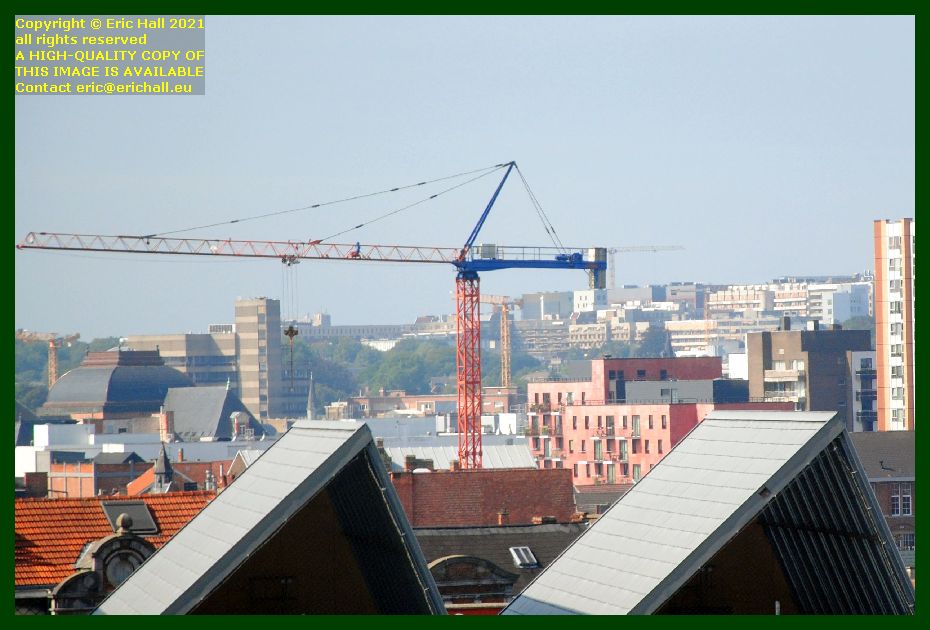 Another thing that you could see from my window up here on the 5th floor was the Universitaire Ziekenhuis Leuven, the University Hospital of Leuven.

That’s the building, or buildings, I should maybe say, over there on the skyline on the right-hand side of the photo. And this photo will give you some idea of the size of the hospital. It’s one of the biggest in Europe, if not the World.

The thing that impressed me about this hospital is that while most hospitals give instructions zbout how to arrive there from the town centre, this hospital give directions from the airport.

It’s truly a cosmopolitan hospital and that’s what I want. Many hospitals and medical services are quite chauvinistic about their treatment, but not so the Belgians. They aren’t afraid to mention medical research that is being undergone in other countries. 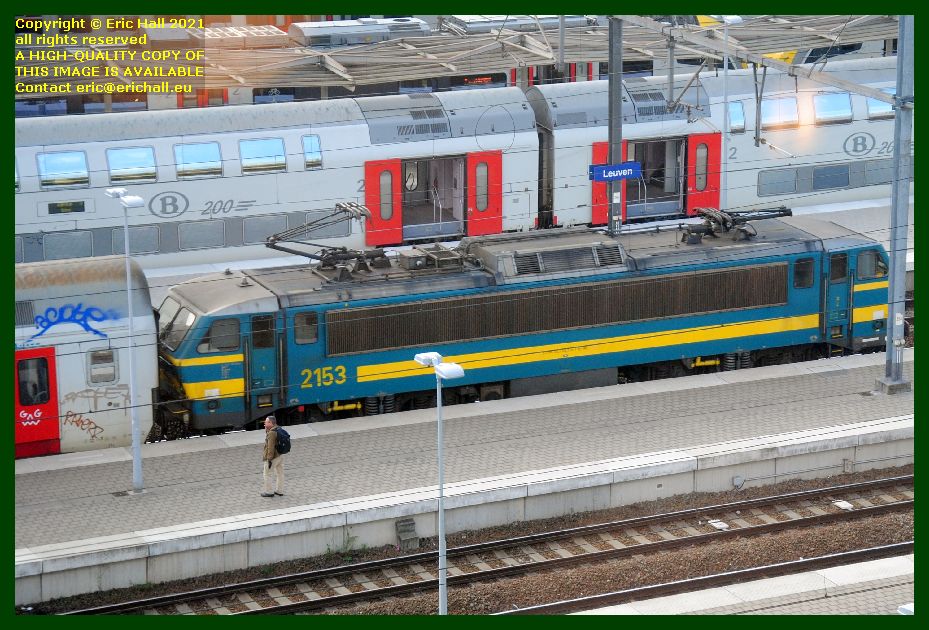 Another thing that I noticed pulling into the station was a rather elderly Class 21 locomotive.

These first came into service in the mid-80s, with 144 taking to the rails. There are Class 11s, Class 12s, Class 21s and Class 27s, with the latter being the most powerful and the former being the least powerful.

They were built by the Belgian BN/ACEC combine which is now no longer in business. And so since the Class 18s have arrived, these are gradually being withdrawn and dismantled as a source of spares for the big Class 27s.

Something else that came through the staion that I wasn’t quick enough to photograph, much to my regret was one of the new Bombardier-Alstom “M7” double deck multiple units that are currently on proving trials on the Belgian network. That would have been quite a thing.

With a nice quiet day I ought to have done so much more too but unfortunately much of the time was spent curled up on my bed having a little relax. No point in fighting it.

Later in the evening I caught a bus that took me out to Alison Wonderland, as her new home is called. She had some falafel left over from her barbecue so I cooked it while she went to the fritkot down the road for a bag of chips.

We had a nice meal and lengthy chat, and instead of singing for my supper I helped her move some heavy furniture around.

Once I’d recovered my strength Alison drove me home. I was totally exhaused and so with an early start tomorrow, instead of writing up my notes I crawled into bed and that was that.