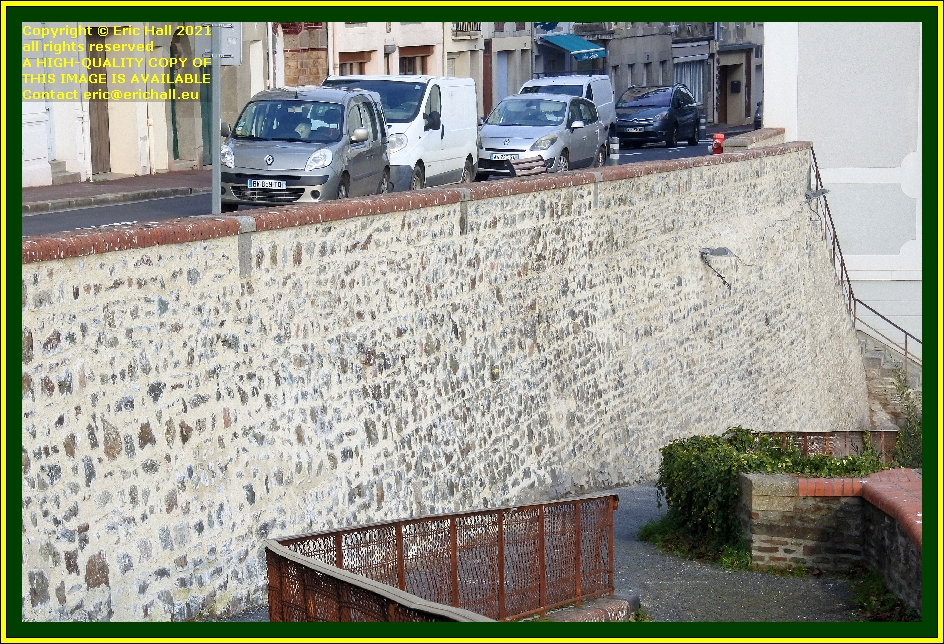 … scaffolding has gone from the Rampe du Monte à Regret, I noticed today.

It looks as if all of the repointing of the wall has now finished, they’ve dismantled the scaffolding, picked up their tools and, as Longfellow once wrote, “shall fold their tents, like the Arabs and as silently steal away.”.

As for the quality of the work, they’ve mixed the mortar too dry by the looks of things. It won’t percolate into the stone and so will eventually solidify and drop out and they’ll have to do it all over again. 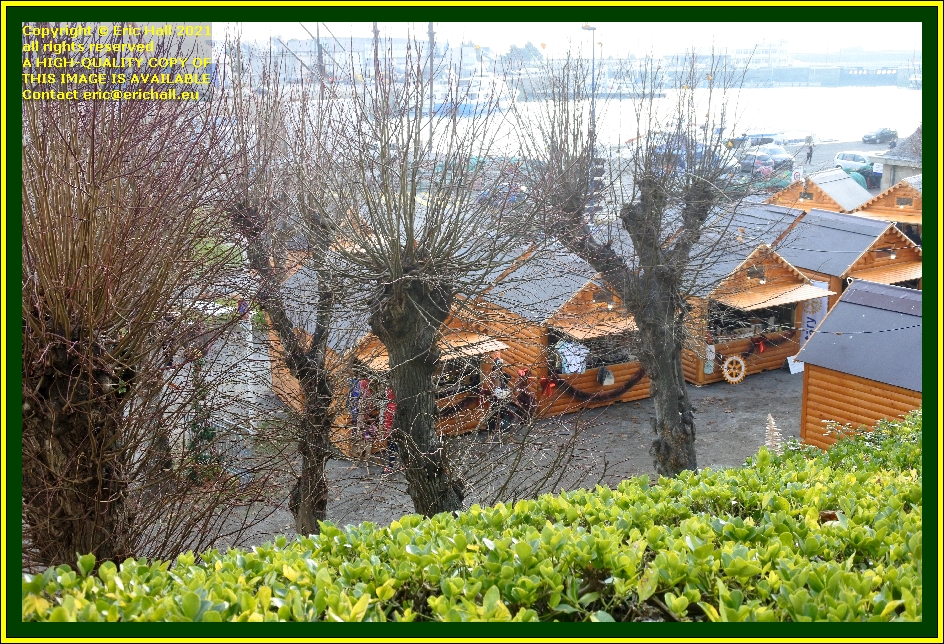 You are probably thinking that that means that I can now take the short cut and go down the steps to the street.

Unfortunately, that’s not the case. The Christmas market is in full swing down there and the whole area is cordoned off. There’s just one entrance and that’s at street level, where there’s a security guard checking Covid passports.

As I type out these notes I’m actually supposed to be down there. A group has been in touch with me about doing a live show for my radio programme and they are playing there tonight.

But if anyone thinks that I’m standing outside in a bitter wind for 2 hours with a temperature of minus 1°C they are mistaken.

And it was freezing this morning too. Winter has come with quite a bang just now. I was freezing when I awoke – at 06:45, about 45 minutes before the alarm went off.

At least I managed to leap out of bed with alacrity (and you all thought that I slept on my own) and dress rather hurriedly before I froze to death. 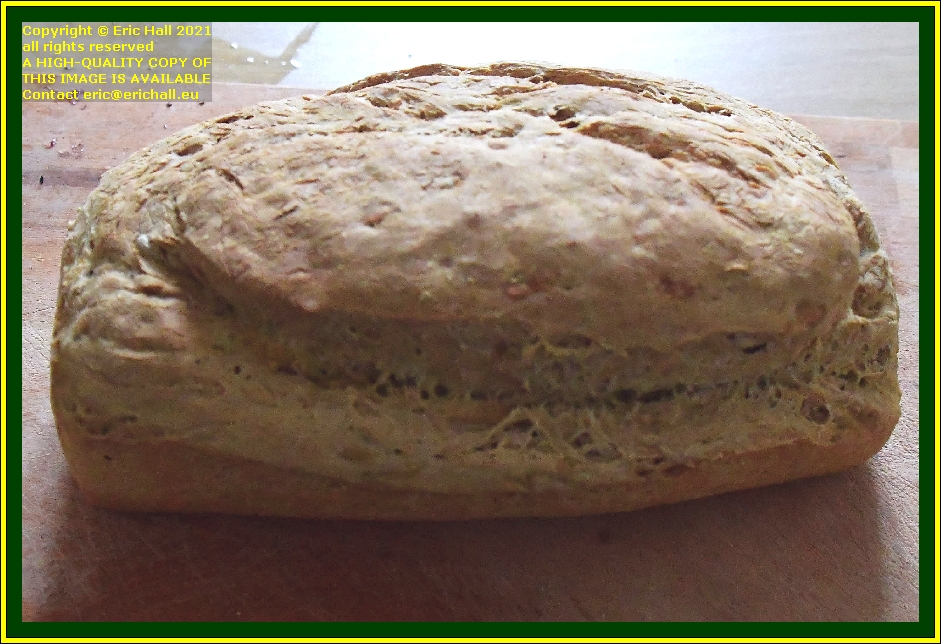 After the medication I came in here to check my mails and messages, and then went back into Ice Station Zebra to make the bread for this coming week now that I’ve finished off the bread that I’d brought back from Leuven.

Another 500 grammes of flour, a couple of handfuls of sunflower seeds and this time I remembered the Vitamin C tablet too. It all went together really well and kneaded up quite nicely.

It went into the oven and 75 minutes later I had a beautiful, soft loaf of bread with a nice even texture. One of the best that I’ve made so far. My bread-making technique is improving, so it seems.

While I was at it, I cleaned, diced and blanched the 2kg of carrots that I’d bought on Monday. They are waiting for some room to be made in the freezer so I can file them away for future use.

One thing that I needed to do was to listen to the dictaphone to see where I’d been during the night. In fact I’d been invited out again for a meal with some people whom I knew. I went off and turned up at this restaurant. I didn’t know these people all that well. There were 2 of them, a guy and a woman who weren’t a couple. We were having a chat and at that moment another girl came down to join us. She was a young girl and dressed so simply but really well, really beautifully that it took my breath away. I made a few complimentary remarks and she blushed I suppose, and sat down. They asked about when the others would turn up. I had heard that someone I used to know and his wife and daughter (who was actually Zero) were coming but they had to go to the dentist’s first so they may not make it depending on what had happened at the dentists, which was going to be something of a shame. They were asking “should be order?”. I replied “no. We’ll have to wait until everyone else turns up and we’ll have to order together, I suppose. That seems to be the normal way of doing things”. However, I did have another reason for not wanting to start until everyone (well, at least one person) was present.

At some point during the night I was walking around the fish docks at some fishing port in the UK. I was doing something at one end of the port where there were a few fishing boats at anchor but I had to walk round the other side of the port where everyone was and that was where you could really smell the fish. Then I had to walk all the way back again but I can’t remember why and I can’t remember what was happening about it all.

As I was off to the physiotherapist this afternoon I needed a shower so I had to wait until the oven had finished backing as I needed the heater in the bathroom. And as a result of everything I ended up having a very late lunch. 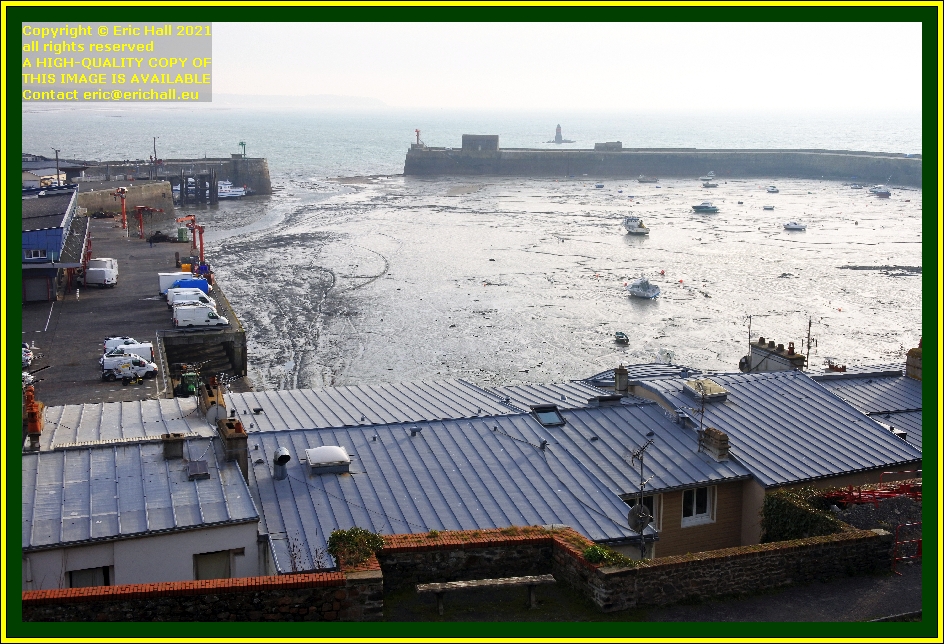 By now it was time for me to brave the freezing conditions and head up to the physiotherapist.

And you can see how cold it is by looking out beyond the outer harbour into the bay. You can see a layer of freezing fog that’s obscuring the view of the Pointe de Carolles.

And although it’s only 14:45 the sun is pretty low in the sky as well, as you can tell. It’s not the kind of weather to be out unless you have to. 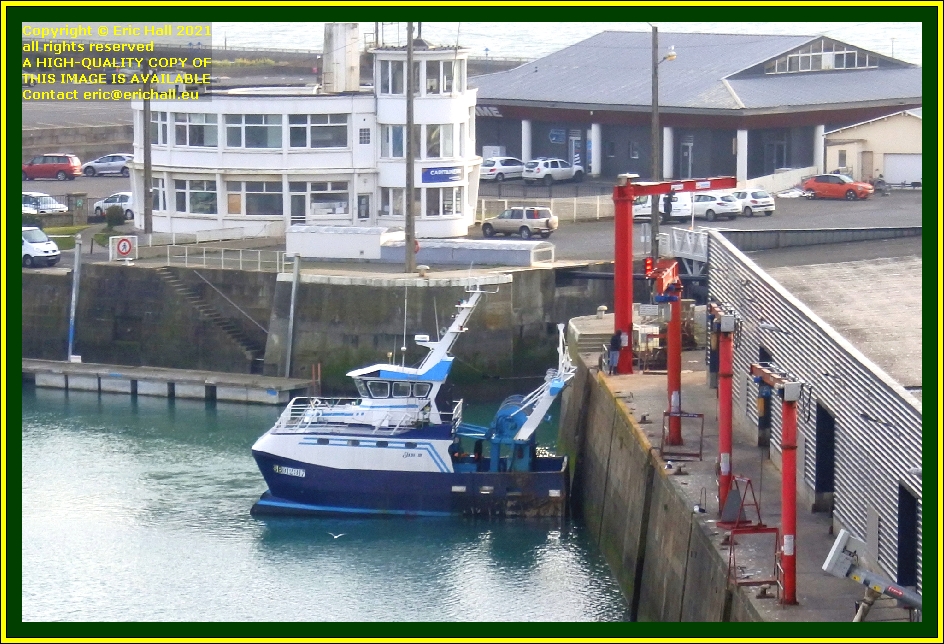 But talking of being out, the port was quite empty of fishing vessels.

They all must be out at sea this afternoon, except for Jade III that is doing something exciting, having reversed up to the wharf by the fish processing plant. Unfortunately, I can’t see what she’s up to.

There wasn’t much else of any excitement going on around the town so I had a slow, weary trudge up to the physiotherapist. For some unknown reason I wasn’t feeling myself this afternoon which is just as well because it’s a disgusting habit.

At the physiotherapist she put me on the cross trainer for five minutes and then we did some kinetic exercises, finishing off with 5 minutes on the tilting platform. The exercises that I had to do on there were agonising but I suppose that if it hurts men it’s doing me some good – except that it’s hurting me in places where I have no problems and not where I have the issues.

It was a very weary and painful me who staggered into the street when my half-hour was up. And also a very destitute one because it’s the year-end and I had to pay her. 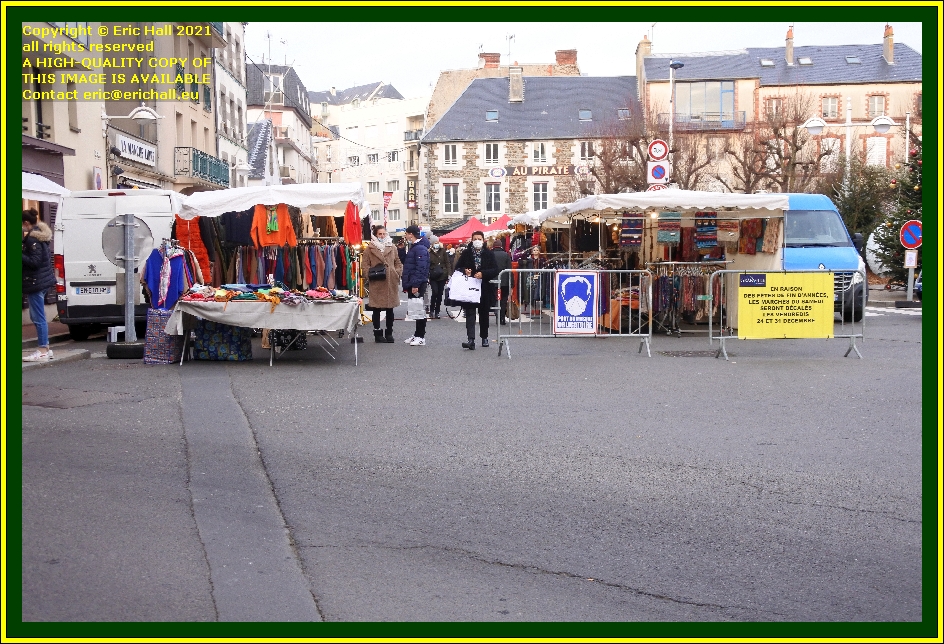 On the way back I noticed that we had a little mini-outdoor market going on in the Place General de Gaulle.

It usually takes place on Saturday of course and that’s Christmas Day so it looks to me as if they have brought it (or, at least, part of it because there aren’t all that many stalls there) forward to today.

There weren’t all that many people there this afternoon which is really no surprise in this weather, and I felt really sorry for the stallholders who are obliged to stand outside without any real form of shelter from the cold and the wind. 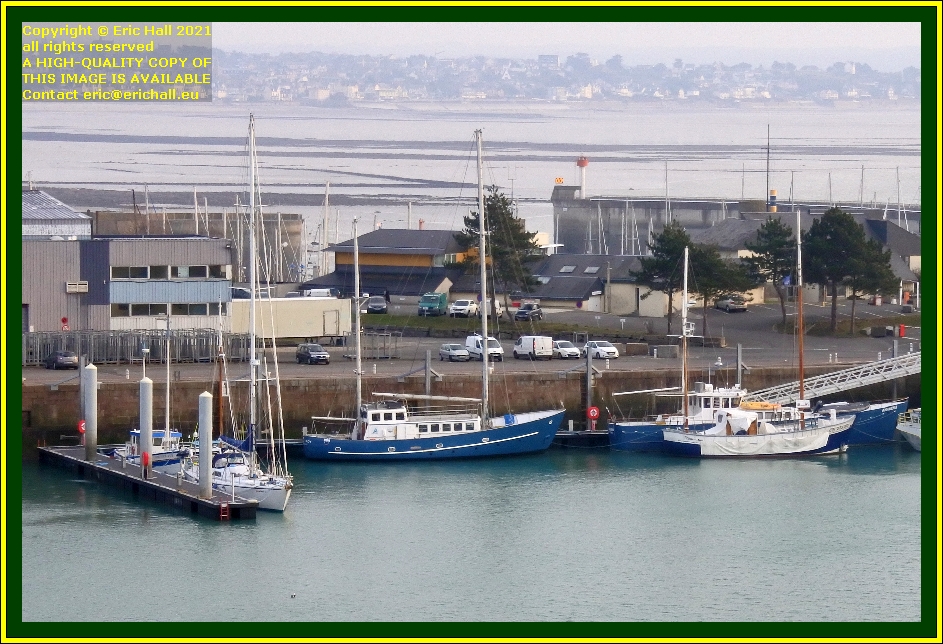 My weary trudge continued on up the hill towards home. However I stopped to have a look at the charter boats in the port.

On the left is of course our old friend Spirit of Conrad in which we sailed down the Brittany coast in the summer of 2019. To her right is Aztec Lady who has now been liberated from her stay in the chantier naval.

The large blue boat to her right is Anakena, the big boat that is planning to sail up the Norwegian coast next summer if conditions allow, and alongside her under a tarpaulin is CHarles Marie. She doesn’t look as if she’s going anywhere any time soon. 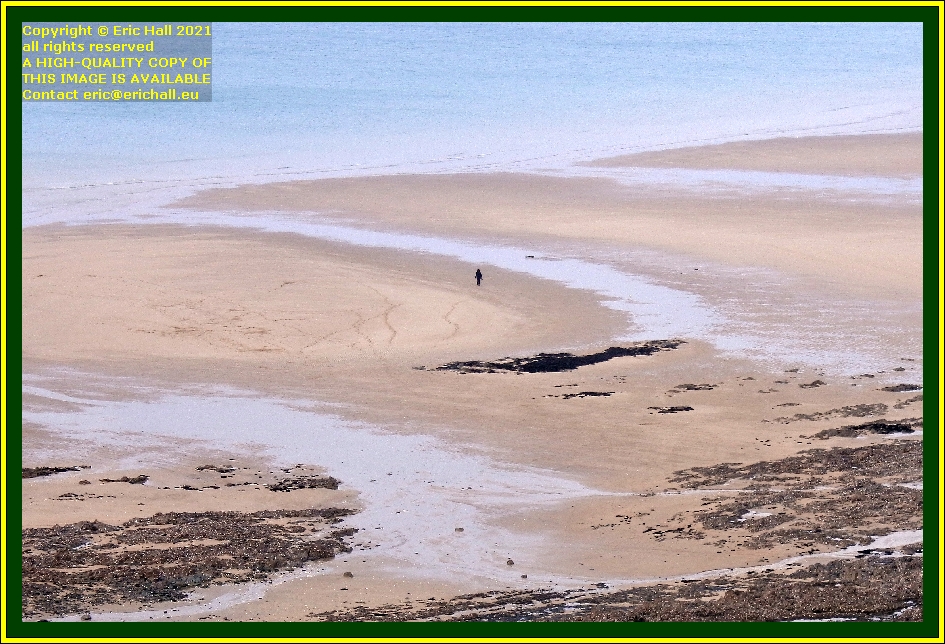 It goes without saying that before I can go in, I have to go for a look at the beach.

And to my surprise there was someone taking a long, solitary walk out towards the water’s edge. all alone down there without another soul around him (or her). That was a lonely stroll.

Back here I had a coffee and then I had work to do. Someone at the University of Newfoundland is writing a thesis on Paradise River, a settlement of sorts on the Labrador Coast. I’ve visited it on several occasions and have dozens of photographs of the area.

Anyway, to cut a long story short … “hooray” – ed … he’s written to me and asked me if he may use some of my photos to illustrate his thesis. So we agreed a trade – I’ll send him some photographs and he’ll send me a copy of his thesis to add to my pile of Labrador literature.

Consequently I had to sort back through my photos for September 2014 and September 2017 to dig out some good ones for him.

Tea was taco rolls with the leftover stuffing, lengthened with a small tin of kidney beans. And now, as it’s cold and I’m cold, I’m off to warm myself up in bed.

Tomorrow I have to tidy up in my bedroom as I have someone coming round on Friday to record something or other for the radio so the place needs to look as if it’s habitable.