… today that I haven’t done since 2005. And this time even more so because while back then it cost me nothing, this time it’s cost me a lot of money.

But ask me if I care.

What I’ve done is to walk away from a hotel that I had booked for tonight and went somewhere else (far more expensive).

But more of this later. Last night I had a strange sleep – waking up at about 00:45 to find that the radio was playing. And then sleeping through until about 05:45 without moving. Not a single nocturnal voyage anyqhere to be seen

Plenty of time to do a load of paperwork and then I went down to breakfast. Unfortunately I wasn’t feeling too well so I didn’t eat much which was a shame because there was tons of stuff there. It could have been an outstanding breakfast.

Unfortunately Jackie wasn’t available but Alison was free today as well as tomorrow so we agreed to meet up this afternoon.

Dodging the roadworks and the heavy showers, I set off for Leuven. 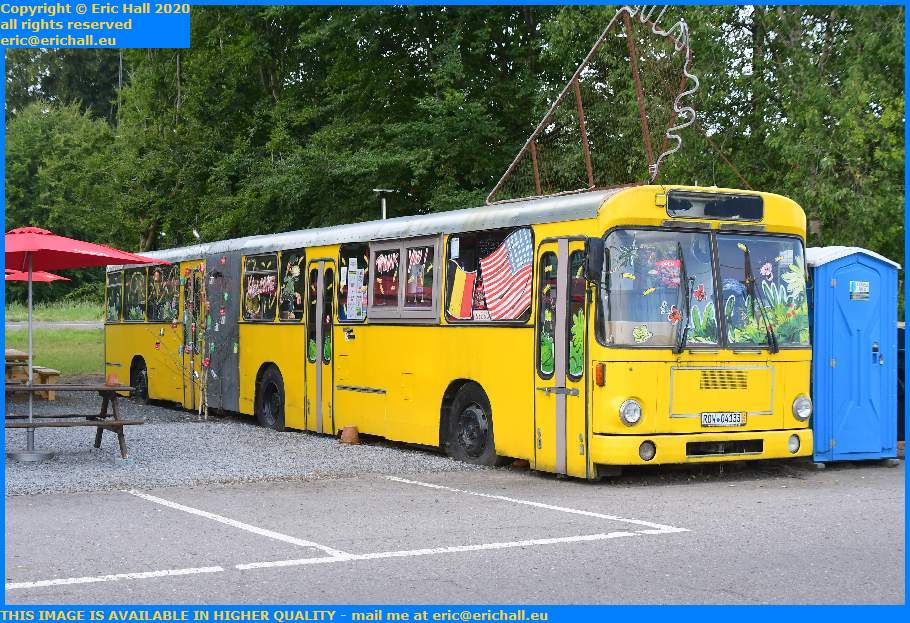 The Lady Who Lives In The SatNav brought me all the way through Luxembourg, where I fuelled up before crossing the Belgian border (fuel at €0:97/litre) and the Ardennes, passing through the town of Bastogne where I stopped to take a photo of another abandoned bus

It’s an old “bendy bus”, one of the articulated buses and judging by its number plate it comes from the town of Rotenburg in Lower Saxony but it’s now the Friterie Marsupilami, the FritKot on the Edge of Town.

There’s a fritkot on almost every corner in Belgium and this is certainly one of the more interesting ones. It’s closed though so I couldn’t find out what it was like.

It took me a good while to find Alison’s house – The Lady Who Lives In The SatNav having brought me into town in entirely the wrong direction. It was a nice afternon so we went to the English shop for a supplies such as vegan ice cream. 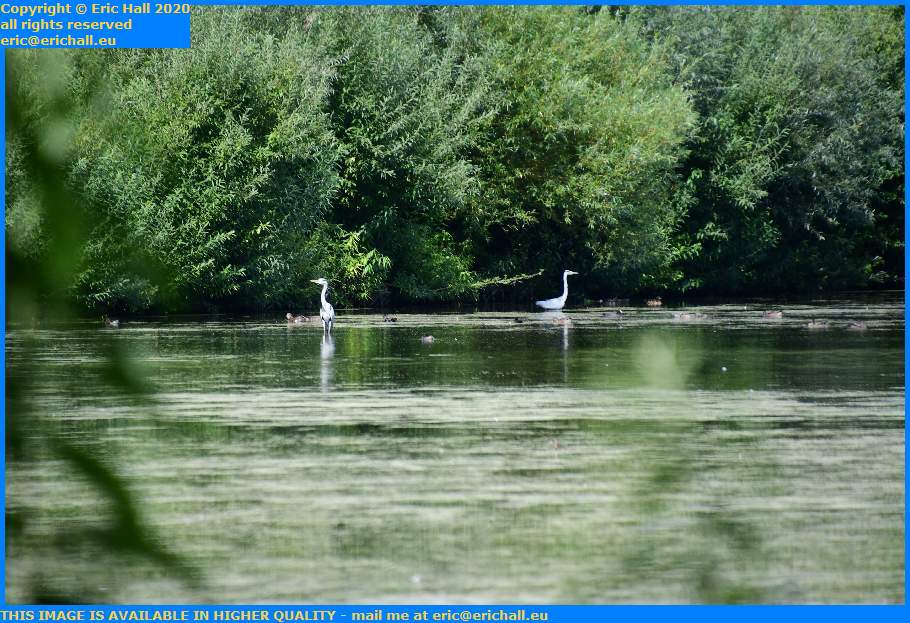 Later on we went for a walk. We discovered a new footpath that eventually took us past the Kasteel van Leefdaal.

Not that I would want to go swimming on a pond like that. There’s that much algae floating aound on top that you could probably walk on it – or, at least, someone lighter than me could. I must keep on with the battle to keep my weight down. 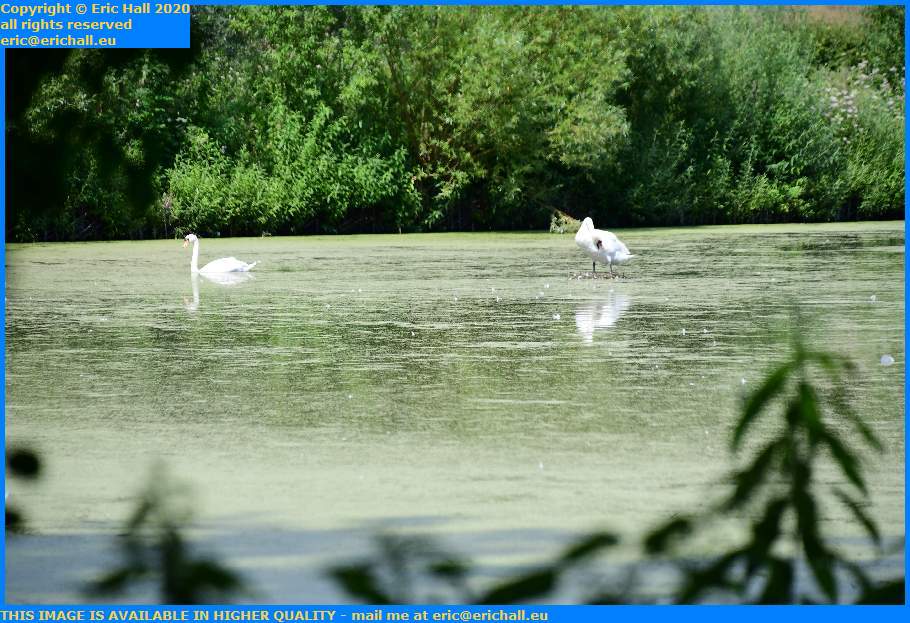 The Chateau isn’t open to the public unfortunately and it’s hidden behind a rather large wall so you can’t actually see very much of it.

Currently owned by the Counts of Liedekerke it dates from the Renaissance period and replaced a previous building. There is known to have been a building on the site since at least the 12th Century.

Armed with our vegan ice cream, we then went back to Alison’s house for a chat. We must be both getting old because we ended up crashing out in the garden in the sun, something that we found quite amusing, although in fact it was a rather sad indictment of our states of health these days.

Alison had to go out later so I set off through one of the most wicked rainstorms that I have ever encountered. All of the road round by Braine l’Alleud was flooded and the traffic lights at a road junction had failed. That led to certain complications until we all managed to sort ourselves out. 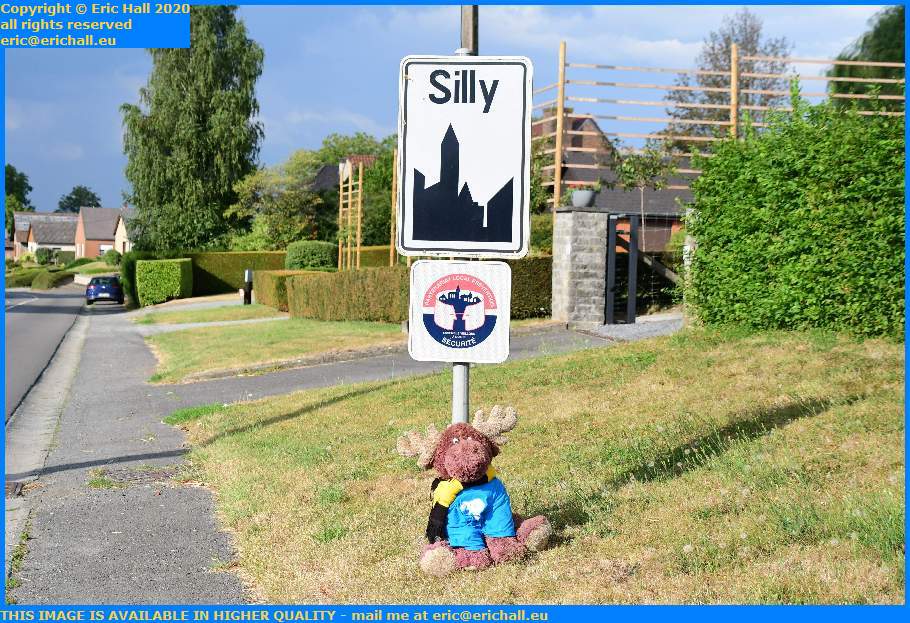 As well as having A FAVOURITE TOWN IN AUSTRIA Strawberry Moose also has a favourite town in Belgium.

It goes without saying that as we were passing within a mile or two of the place, we had to go there. His Nibs is never one to pass up on a photo opportunity whenever he gets the chance, as regular readers of this rubbish will recall.

Having done that, we headed off down to peruwelz on the Belgian – French border and my hotel. But one look at it convinced me that this was not where I wanted to stay. Crowds of single men loitering outside, sitting on the steps or leaning against the wall. Crowds of them.

It’s the kind pf place that gave me a most uneasy, eerie feeling that I can’t explain. But always having been one to rely on my own intuition, I decided that it wasn’t the place for me so I went elsewhere.

Tea tonight was a plate of chips and a salad, and watching the people coming into the fritkot, I can see immediately why the infection rate in Belgium is so high. Despite all of the precautions that are supposed to be taken, the wearing of masks is, shall we say, rather casual.

And the roads in Belgium are appalling. They are much worse that I ever remembered them. They are just like in a third-world country and for one of the richest countries in the world, it’s an embarrassment.

Tomorrow I won’t have far to go on Belgian roads because I’m close to the frontier here. About a kilometre away, I reckon.

With any luck I’ll be over the border early tomorrow and then a leisurely drive home. It might take a couple of days to make it but I’ll be back by the middle of the week. It’s been a long time