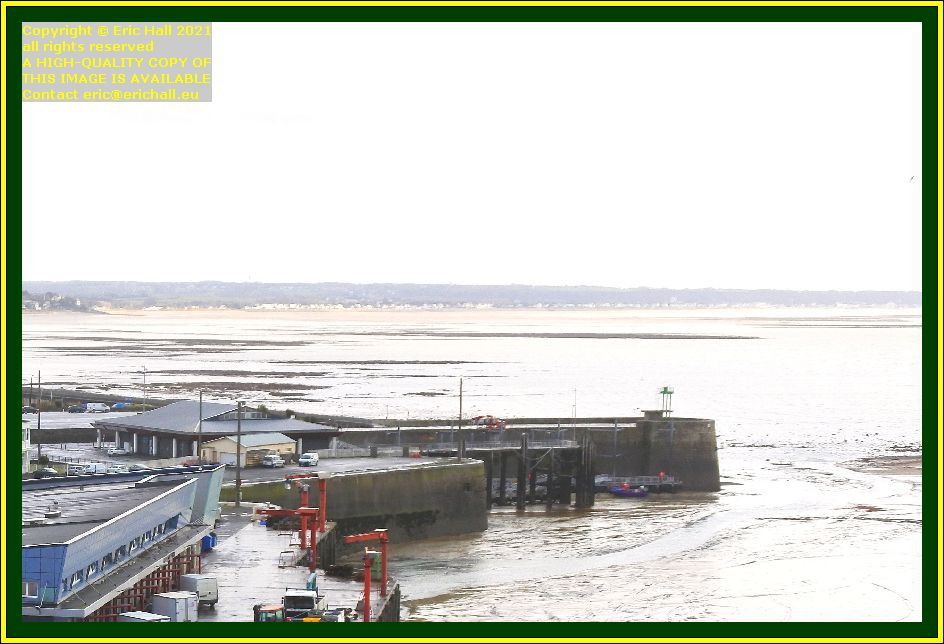 … has taken on a whole new significance today, judging by the news that’s currently doing the rounds.

A couple of people who were over there at Jullouville looking among the rocks for crabs came across an old boot instead. And in it were the remains of a human foot.

There are of course all kinds of wrecks out there in the Baie de Mont St Michel – fishing boats, aircraft, pleasure craft and so on – and many people have been lost there, especially during the fighting in June and July 1944.

What has quite possibly happened is that Storm Arwen has disturbed an old wreck that still has human remains on board and the boot has floated free.

But it seems that from now on, when one is mentioning the peche à pied one will have to specify to which pied one is actually referring.

This morning at 06:00 when the alarm went off I had a struggle to take to my feet. But once the medication had been taken and the mails and messages checked, I cracked on with the two radio programmes that I needed to prepare, with the aid of a mug of strong coffee.

It took me much longer than I reckoned too, knocking off as finished at 13:15, but that was having had quite a chat on the internet with Liz who was on line.

What else didn’t help was that I couldn’t find a suitable ending-track for my Christmas programme. In the end I had to find one that would do, stretch out the speech that went with it and lengthen a few pauses and in the end it fitted quite nicely.

After lunch I had a quick clean-up and then headed off to the physiotherapist. 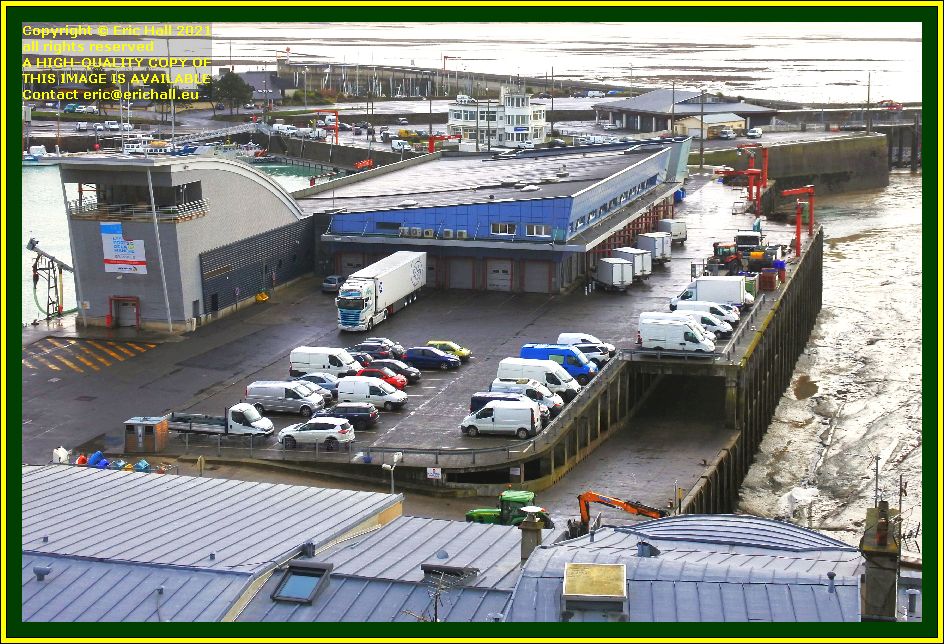 Outside it was grey and miserable and threatening rain.

On the corner of the Boulevard des 2E et 202E de Ligne and the Boulevard des Terreneuviers I could look down on the fish processing plant. There weren’t any boats down there of course – the tide is well-out right now – but there is a refrigerated lorry and several freezer vans parked down there.

There must be plenty of fishing boats out at sea right now and they will be due back on the early evening tide, when the vehicles down there will take away the catch.

Yesterday while we were out on our travels we noticed that there were no longer any boats moored up at the ferry terminal in the tidal harbour. 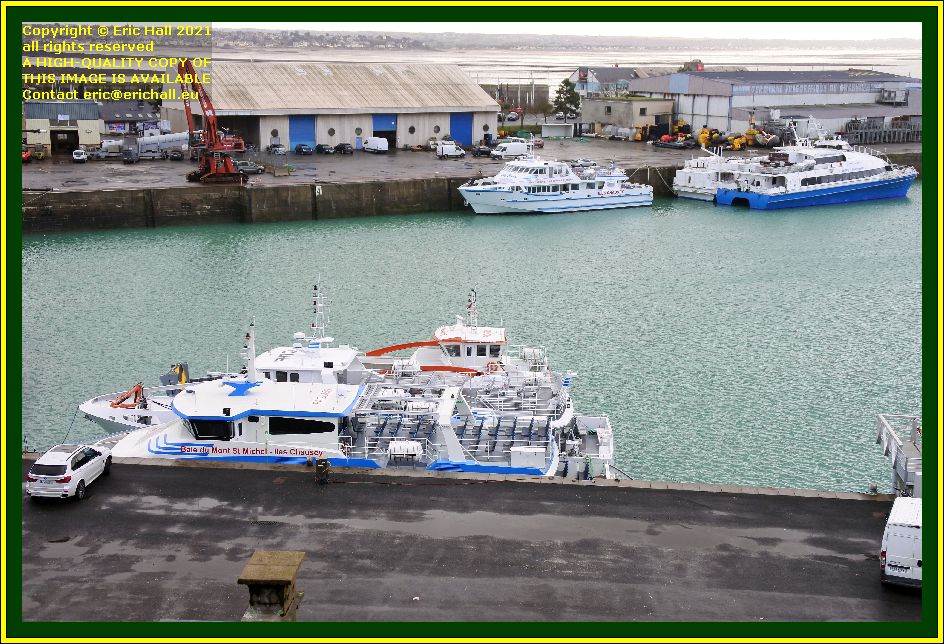 They have all now come into the inner harbour so that would seem to indicate that they have no plans to go to sea in the immediate future.

The three that are moored together in the foreground are the brand-new Belle France nearest the quayside, with the newer of the two Joly France ferries, the one with the smaller upper-deck superstructure next to her. On the outside is the little freighter Chausiaise.

Over at the back on the right are the two Channel island ferries – Victor Hugo on the outside and Granville on the inside moored against the quayside. 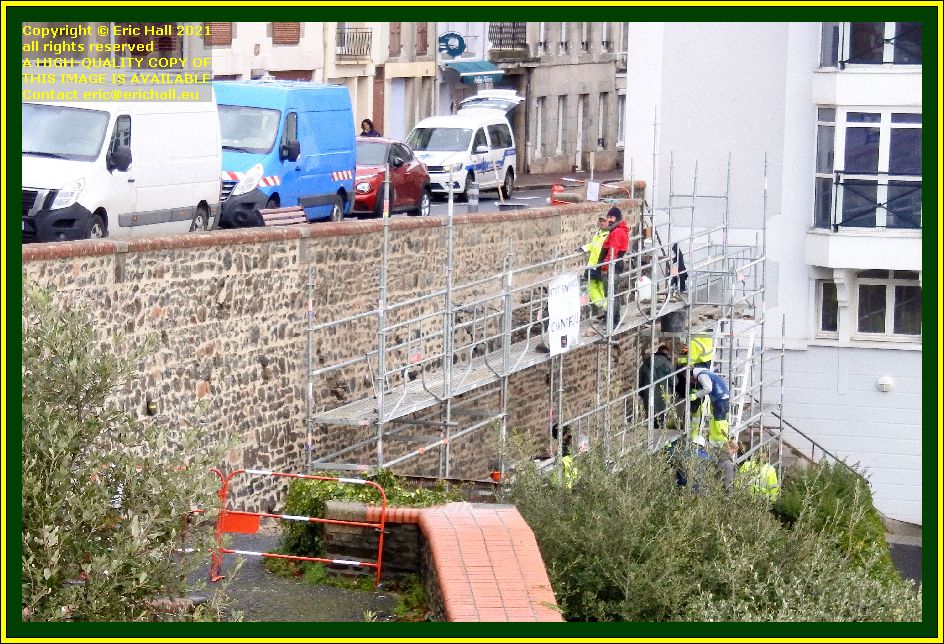 Further on down the road I had a look at what was going on with the pointing at the Rampe du Monte à Regret.

They seem to be making good progress with it, but my attention was drawn to the two guys on the scaffold – the one in the red jacket and the other in the fluorescent jacket.

Judging by the way that they are standing around doing very little and pretending to inspect the work, they look very much like site managers to me.

Today she had me do five minutes on the cross trainer and the rest of the time was spent doing kinetic exercises. And I’m dismayed at how much I seem to have been affected by whatever it is that is going on with my body right now.

Much of my co-ordination and balance has gone completely and I don’t have the power in my knees to stand up from a sitting position without using my hands.

Anyway, after half an hour she threw me out and judging by the state of the pavement I’d just missed a torrential downpour.. 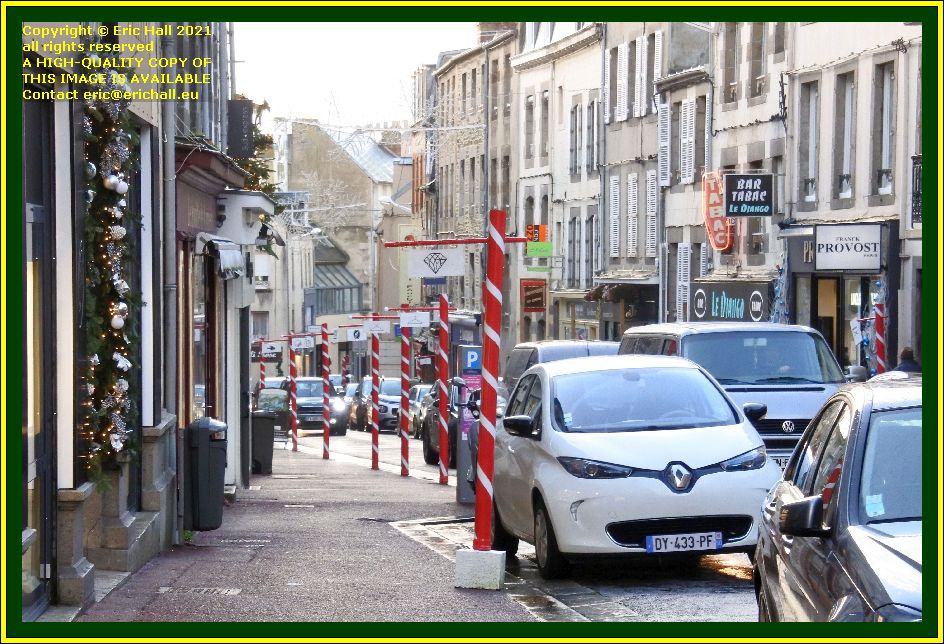 On the way up to the physiotherapist I’d noticed that the decorations in the Rue Couraye have … errr … evolved.

We now have candy-striped pillars placed over all of the bollards on the edge of the kerb. They have signs on them indicating the nature of the shops alongside.

Dark though it was right now, the Christmas lights weren’t yet illuminated. I can see that i’m going to have to come down later in the evening one night and see how they look, in the hope that they are better than they have been in previous years.

For some reason, I don’t seem to have the same enthusiasm that I had in previous years. 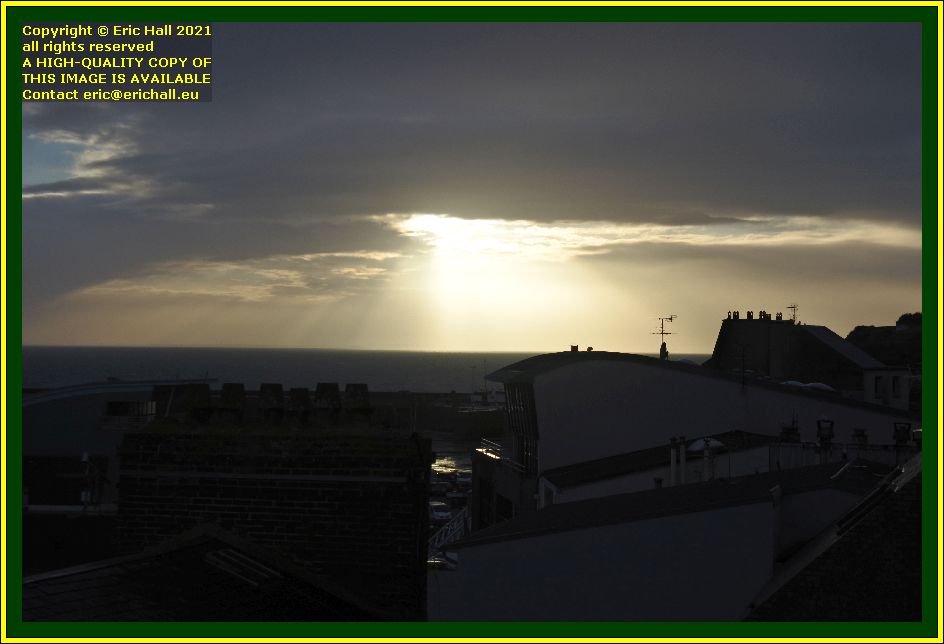 Halfway up the Rue des Juifs I stopped at the viewpoint overlooking the harbour.

Not because I was out of breath and not because of anything that was going on in the port either but there was another beautiful sunset out there in the Baie de Granville. This was far too good to miss. It really was quite impressive.

Before I set out earlier I put a can of energy drink into my bag with the idea that if I needed it I could drink it on the way home but I totally forgot about it. I might not be feeling enthusiastic but at least I’m feeling a little more fit than I was three months ago. 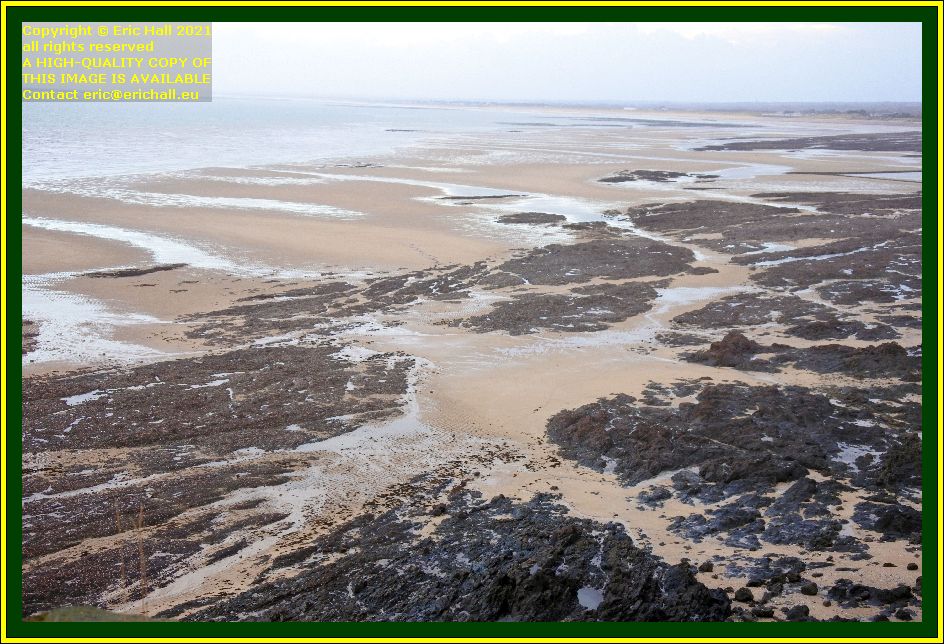 Before going back into my building I went over to have a look down onto the beach.

There’s plenty of beach down there just now, but there wasn’t anyone down there on it. That’s not really a surprise because it was quite windy, going dark and threatening rain.

Back in the apartment I had a nice hot coffee and then transcribed the dictaphone notes from last night. I’d had quite a busy night by the looks of things. and there was plenty to transcribe.

There were quite a few entries from the last few days too but you’ll have to wait for tomorrow to read those.

Anyway, last night I was at the cinema. I’d gone to see some rock concert or other that was taking place there. I mentioned to someone that I was going and he said that his younger sister was going as well. I turned up at this cinema and took a seat. When I looked round, there was a young girl there waving at me. I said “hello”. I thought to myself “is this that girl?” because when I looked around again there was another girl waving at me who looked pretty much identical. I couldn’t work out who was who and I couldn’t remember her name. As usual I was tying myself up in a knot about “should I go and sit next to her and so on? What if it was the wrong girl?”. The usual kind of confused state that I find myself in at times. Then the lights went out and we had the immediate “get your hand off my leg” comment that used to go around the cinemas in Crewe in those days when the lights went off, which always of course caused a lot of laughter. When I looked around though, both the girls had disappeared off somewhere. Here was yet another situation that I’d let slip through my fingers because I was being far too indecisive. The story of my life, isn’t it?

And I wish that I knew who the girl was too. Although seeing as I let her slip through my fingers like that, maybe it’s better that I don’t know, to avoid any disappointment.

Later on I was going out that night and I needed a new jacket to wear to make myself look smart (it’ll take more than a jacket to do that of course) so I went off to a shop that I normally use. I’d had a look round on the upper floors at a few different kinds of things but no jackets. I’d taken off my jacket and hung it on a peg while I was doing that. I then went downstairs to look at the men’s clothing. There were lots of other interesting things down there as well. When I arrived downstairs there was only the men’s clothing section open. The rest was all closed off as if they were remodelling the shop. They were busy hanging clothes onto hooks from behind the blanking-off thing that they were doing. There was a TV there with a load of men there watching the TV. I thought that they had probably been dumped by their wives who had then gone off to do the shopping somewhere else. Before I could look for a jacket I awoke.

Later still Nerina and I had had an argument in Germany somewhere on holiday and she had stormed off. I was walking the streets – it was 00:30 – wondering whether I should go back to the hotel room. As I was walking down the street a car pulled up. A man got out with a little girl about 7 or 8. She walked past me and said “here’s your computer mouse. I got on my bed and it fell off so I put it on the floor and here it is”. I took my computer mouse and was still wondering what to do. Somewhere somehow it turned out that Nerina had gone and my car had gone as well. I was stranded in Germany. I ended up with something like a Bella estate that I had managed to find. I was with that car and with Linda from Portugal (and here’s someone from a very distant past making her debut in my nocturnal rambles) but I’m not sure at all about where this bit with the Bella estate fitted in. I was in Stoke on Trent by this time

Finally I was having to negotiate my passage through the country that had formerly ruled the place where I live. I suspected that it wasn’t going to be easy. We set off and reached the border. I’d built some kind of big snowball or snowman and behind it were hiding several other men. I was discussing with them the plan that we’d go as far as the border and maybe go across. There would be a lot of bloodshed. They asked “what after that?”. I replied “I don’t know after that”.

The early start and the exercise at the physiotherapist’s had worn me out today and what with my early start on Sunday, I ended up drifting away for 20 minutes or so. That was rather a disappointment because I’ve been trying to avoid that for the last couple of months.

Tea was taco rolls with the left-over stuffing from Saturday evening lengthened with a small tin of kidney beans. And it’s even more delicious after marinading for a couple of days.

But now I’m off to bed. It’s early but I’m exhausted and I have my Welsh lesson tomorrow. There can’t be many left now before we break for Christmas. With my cookery lesson on Friday I have plenty of notes to review tomorrow so I need to be at my best.