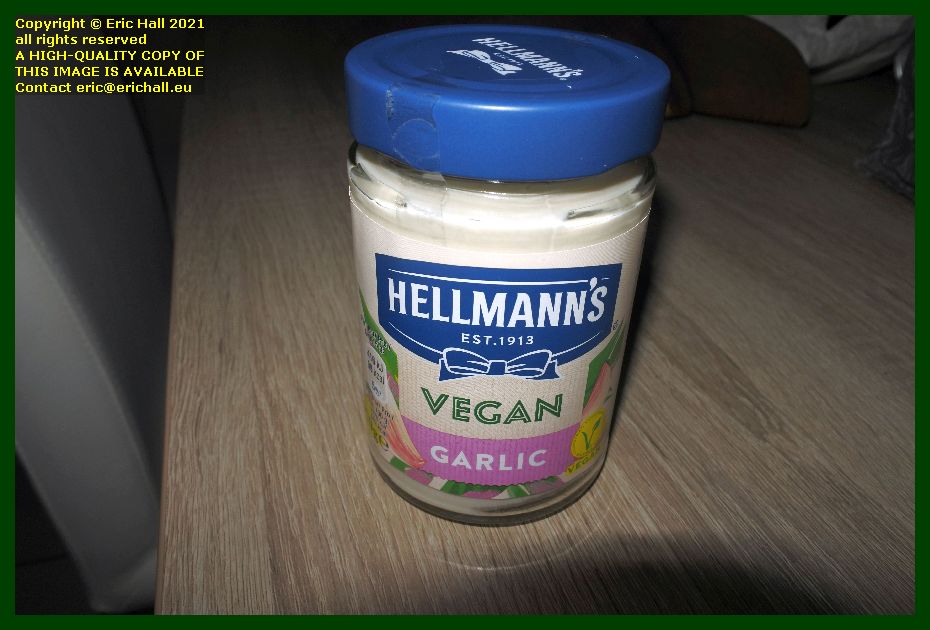 … this to go on my lunchtime butties?

This is something quite new in the shops. I’ve never seen it before. And I shan’t have to worry about visits from vampires during the night because I tried some of it with my pasta and vegetables and believe me – it took the varnish off the door when I breathed out. This was definitely a good buy and no mistake. It’s the kind of thing that will put hair on places I don’t even have places.

But be that as it may, let us return to our moutons as they say around here.

That is, around France, because Im not in France right now. I’m actually in Leuven because it’s time to visit Castle Anthrax again.

At 06:00 when the alarm went off, I leapt out of bed – sort of, something like – and the first task of the morning after the medication was to peel, dice and then blanch a kilo of carrots that I’d bought on Monday. And then I put them to drain in the sink.

Secind thing was to make a coffee and then make some sandwiches etc for my lunch. Packing my stuff and then giving the kitchen a good clean and disinfecting and, of course, taking out the rubbish before it walked out on its own.

At 08:05 when I went out this morning it was already scorching hot. Heaven alone knows what it’s going to be like at 15:00. But heaving my pack up onto my back I set off down the hill in the Rue des Juifs. 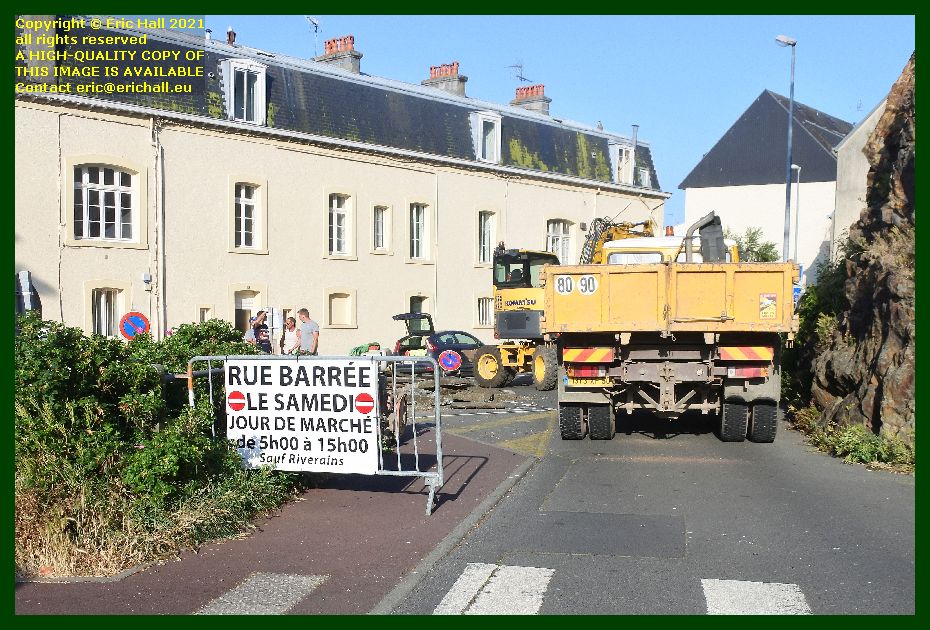 Down in the town there was already some excitement going on in the Rue des Moulins.

They had a concrete cutter and a digger down there, sticking a pile of earth in the back of the lorry down there, and the workmen are busy admiring the hole that they have dug. For a moment I was wondering if I should go over and fall in with them but instead I pushed on.

At the railway station, my train wasn’t in yet so I had a nice relaxing sit on a bench on the platform while I waited for the train to come in. 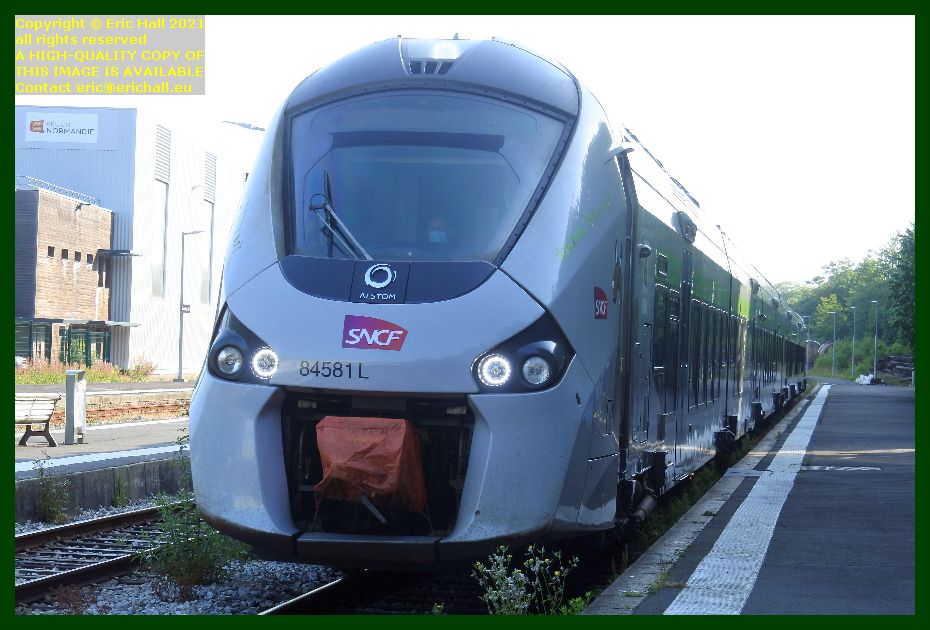 There wasn’t all that long to wait. The train pulled in round about 08:45. Just one six-car unit instead of two six-car units coupled together.

Climbing aboard, I went off to find my seat. For some reason or other that I don’t understand, they had me sharing a 4-seat combination with a couple of other people. No chance of my supporting that idea so I grabbed an empty seat where I could sit all on my own.

Having had a very late night last night, I wasn’t up to doing all that much but I did managed to copy onto the laptop all of the files that I’d backed up onto my memory stick. And the music ones took some sorting out. I’ll have to research the albums that I cropped the other day and work out which song goes where.

Our train was delayed at Argentan and so we arrived 10 minutes late at Paris Montparnasse. But there was no delay on the Metro and I arrived at Gare du Nord with plenty of time to spare. 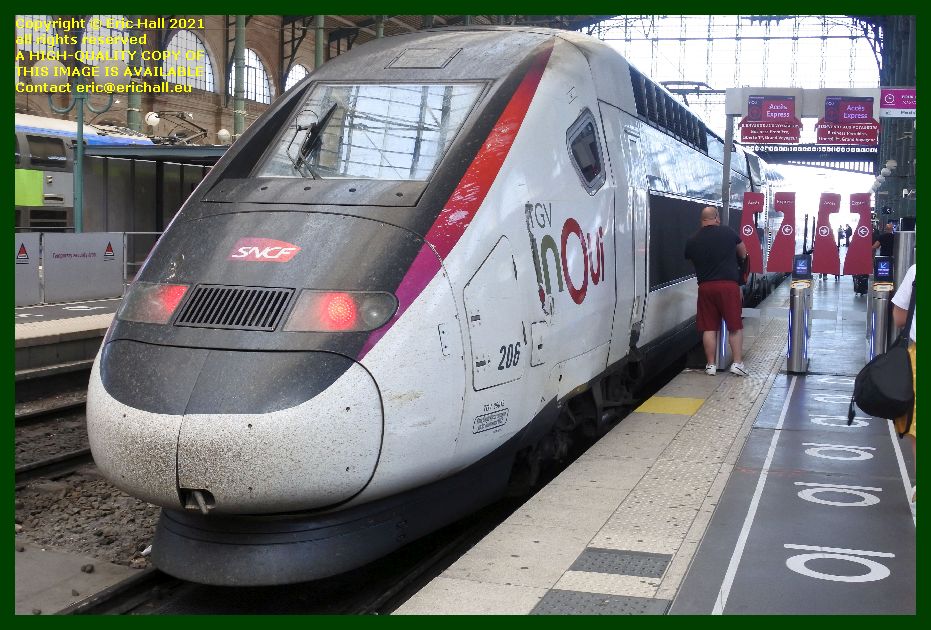 Just as I arrived at the station concourse the train from Lille Flandres was just pulling in.

It’s one of the TGV Inoui Reseaux Duplex trains that we travel on regularly – one of the double deckers, but we aren’t allowed to board it yet. There is going to be a delay because these days they give the train a deep clean before we’re allowed on.

As soon as the cleaners had finished they announced the train, and there was a mad scramble of passengers towards the gate. And there as a slight delay from my part because it took me a minute or two to work out how the rail ticket on my phone works. 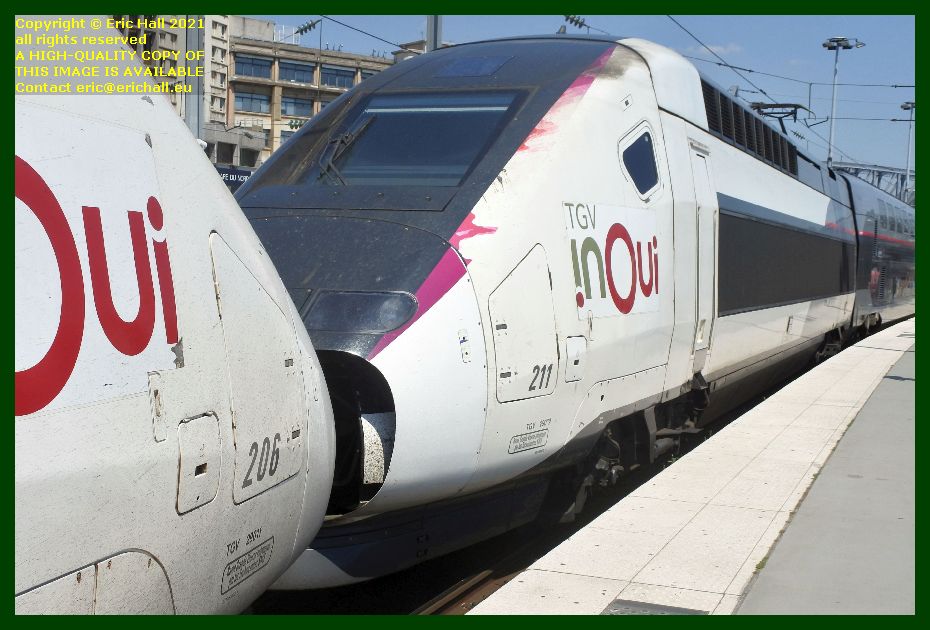 The train is actually two eight-car units coupled together and so it goes without saying that I was in the second half down at the far end of the platform.

And you’ve no idea of the confusion that I caused trying to find my seat, because it didn’t exist. Even the ticket collector couldn’t find it.

On close examination however, we discovered that I’d gone into the wrong carriage. I’d gone in through the correct door but at the top of the stairs I turned right instead of left and hadn’t noticed that I’d walked over the bellows into the next carriage.

But once I was sorted out, I had a good sleep all the way to Lille Flandres.

We had a curious incident after we left the station. Some woman was asking some passers-by “which is the way to Lille-Europe?”. I told her “follow me, I’m going that way” and she did – for the first 100 yards and then she shot off ahead.

She must have known the way after all for she was standing outside the station smoking a cigarette when I caught up with her. 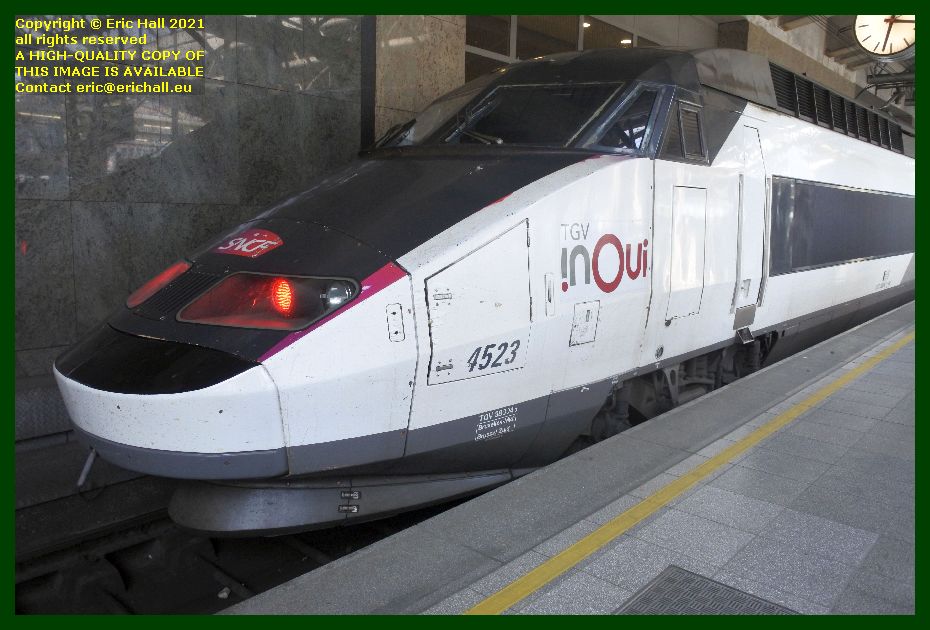 When the train pulled into the platform we all swarmed down the steps.

At some point I must have dozed off because the rattling over the points as we came into Brussels awoke me. And so I packed my things.

Having gone through all of the procedure about Covid tests, Passenger Location Forms and the like, there was no control at all at the railway station and I felt quite disappointed.

There was a train to Leuven and Liège on its way into the station so I ran off to platform 15. 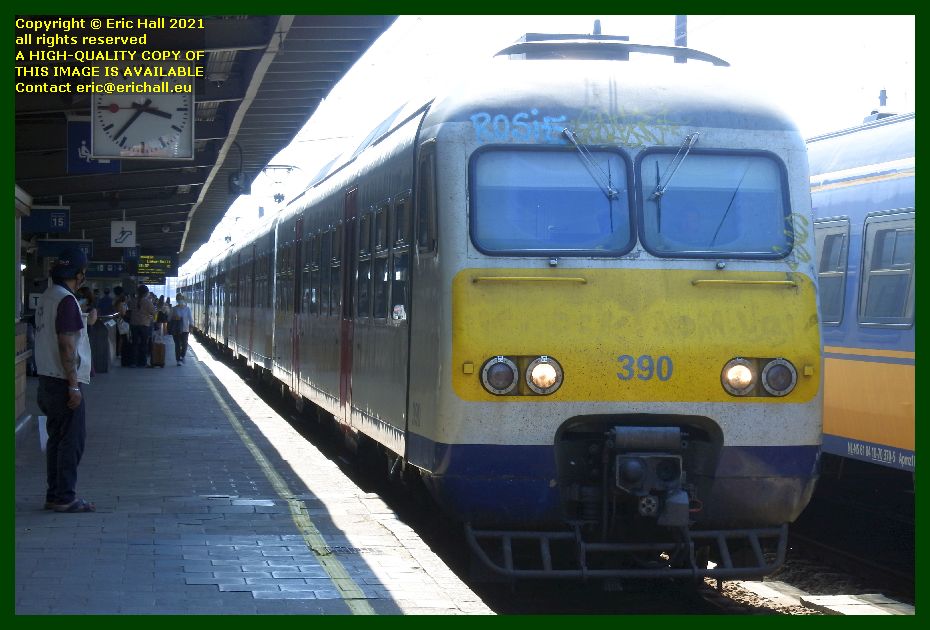 The train was another one of these disreputable Am 80 automotrices or multiple units.

Old, tired, dirty and graffiti-ridden, they should have been put out to grass a long time ago from that point of view. But they are quick and reliable, and perform a lot of long-distance work like Brussels to Luxembourg and the one on which I’m riding – the Belgian Coast to Liège.

If these trains were cleaned, the graffiti was removed and they were given modern interiors with a modern seating configuration, they could keep going for another 40 years. 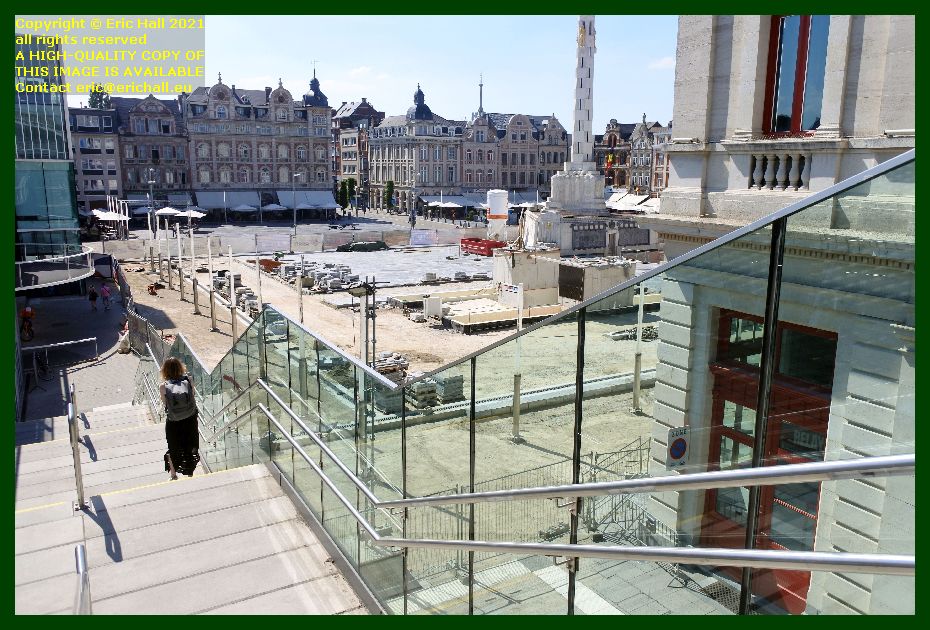 But from up there, there was a good view down onto the Martelarenplein. I’ve taken a few photos of that just recently but usually from ground level. This is the first opportunity that I’ve had of taking an aerial view and so I wasn’t going to miss it.

The heat was really oppressive as I struggled around the ring road to the Dekenstraat. I had to stop a few times to catch my breath. At one point I was overtaken by some weird kind of solar bicycle but he cleared off quickly before I could photograph it.

At the Dekenstraat I found my room – another one of the upmarket duplexes. They are very good to me here, giving me a free upgrade whenever there’s one vacant.

Having sorted myself out I sat down to do some work. There was something on the dictaphone from the night but the only thing that I remember about it was being on a bus coming out of Hanley down the Etruria Road. Suddenly it had to manoeuvre into the outside lane, round in front of a couple of cars then off to the left down a slip road onto the “D road”. The slip road had all kinds of houses alongside it and it was cold and foggy and it hav been snowing heavily. I asked the driver what was happening. He said that the police had told him to go that way so that he didn’t have any other choice. I asked him “what about the people who live in Longport and places like that?” He replied “that’s rather a shame but the police have told me to do this and this is what I have to do”. Then I awoke in a really cold sweat again. There was much more to it in this dream and I think that my ex-friend from Stoke on Trent appeared in it somewhere

Having finished that I had more things to do but instead I crashed out on the sofa. I awoke with a start at 18:45 and there was shopping to do so I had to nip out smartish because they close at 20:00. 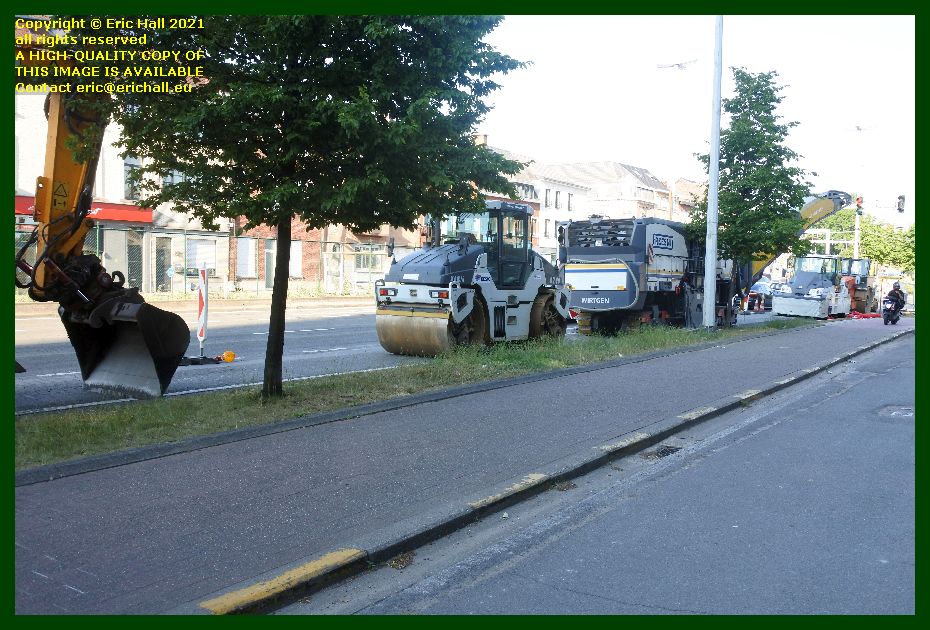 Regular readers of this rubbish will recall that we’ve been watching the roadworks down at the junction of the Naamsestraat and the Naamsevest.

They are now at the stage of resurfacing the road so I reckon that in another three or four years they might actually have it finished. We all know how quickly they work here in Belgium.

Normally I would be going to the Carrefour but I didn’t have the strength tonight so I ended up at Delhaize. And I was only just in time too because as I was queueing up to pay, they switched off the lights in the shop.

In order to get back up the hill and return to my digs I had to have an energy drink. But I made it back and made myself tea – falafel burger with pasta and veg – with the latter all mixed up with that garlic dressing. Pudding was pineapple slices with sorbet.

There was the intention to write the journal entry for today but instead I fell asleep again. When I finally awoke I just went to bed to sleep it off. I can write up my journal tomorrow.