… back to 2004 when I was ill and thinking that I ought to develop a new interest, that the subject of footy first came up. Brussels is ideally situated for being a Northern European footy fan and I do remember thinking that as Belgium and France are rather boring in that respect, I ought to cast my net a little further afield.

Dutch football fans are well-known for their passion and ardour and as the town of Breda is easy to get to from here on public transport (change trains at Antwerpen), then NAC came onto the radar. However, times changed, and things changed, and I changed, and that was that. Nevertheless, it was always something that turned around in the back of my mind.

Dutch football has some very interestingly-named teams such as Willem III, Heracles and Top Oss, but pride of place has to go to the enigmatically-named Go Ahead Eagles. Any team with a name like that deserves to be supported. And so imagine my surprise this morning when, over a cup of coffee, I glanced at the footy fixtures and found that the Eagles were playing away this evening – at NAC Breda!

So early this afternoon after lunch I leapt into Caliburn and shot off up the motorway as far as Weerde (I really ought to live in a town with a name like that – second only to the town of Silly of course) when I realised that I didn’t have my passport (I seem to be making a habit of this).

Back on my way to Antwerpen I encountered a Carrefour at Mechelen so I was even able to do a pile of shopping, and after that, with Golden Earring playing on Caliburn’s music centre in honour of my Going Dutch, I eventually arrived at the ground. 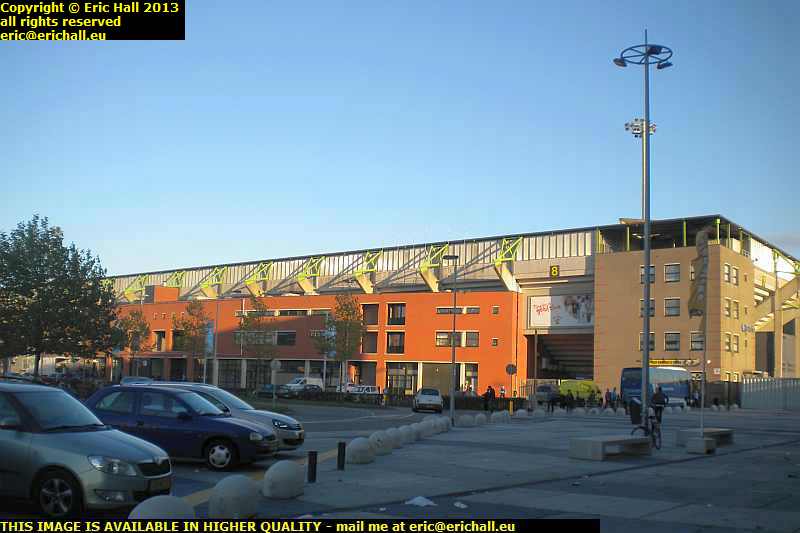 Nice and modern, which many purists (including Yours Truly) will think is a pity, but with plenty of space around it and plenty of parking too which makes a pleasant change.

Buying a ticket for an Eredivisie match is not easy. You need to have a Dutch FA clubcard to but a ticket for the match. if you don’t have one, which of course I don’t, you need to produce a national identity card, which I don’t have either, or else produce a passport, which I did have, so it was a good job that I remembered to go back and fetch it. But just €15 (that’s £12) for a ticket is an absolute bargain to watch a 1st-tier match in a keenly-fought domestic league.

Next stop was to buy some food. I left Caliburn (who has never been to the Netherlands before, by the way, so there’s a first) at the Stadion Rat Verlegh (a delightful name) and went on foot to the centre, and I’m glad that I did because I stumbled once more upon something quite exciting that I would otherwise have missed. 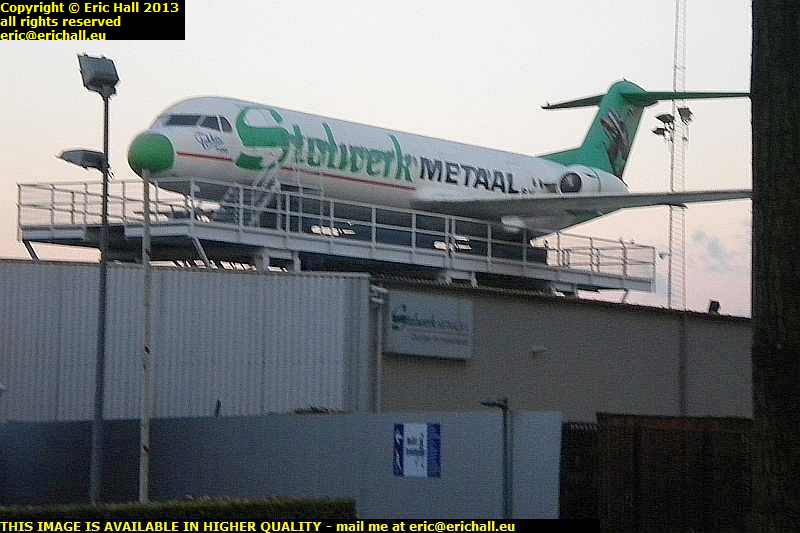 This is a Fokker 100 of the late 1980s or early 1990s and what it is doing here as an advert for a scrapyard I really have no idea. This isn’t the first one that we have seen either, for those of you with very long memories will recall the Andover that sat on top of a scrapyard at Ettiley Heath, at the back of Sandbach, for a while. But anyway, here it is and here it sits, and here it will probably stay until the price of scrap aluminium rises again.

It did rather remind me of that delightful story about the old World War I pilot reliving one of his battles during a live television interview.
“There I was, at 8,000 feet, all on my own, and suddenly these five German Fokkers appeared out of a cloud, right in front of me”
“I should mention, for the benefit of our younger viewers” said the interviewer “that a Fokker is a type of German aeroplane”
“Thats right!” ejaculated our hero. “These Fokkers were Albatroses” 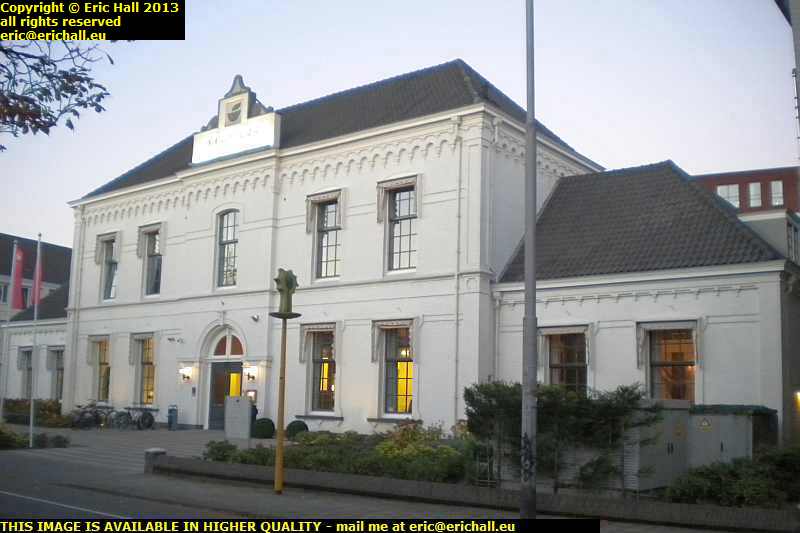 So I eventually made it into town, following my nose which was quite interested in the smell of chips that it was detecting.

This brought me to a little square just on the edge of the old medieval centre and here was a beautiful historic building. I’ve absolutely no idea what it might be although it looks like an ersatz town hall or school building of the late 19th Century when the Dutch ran out of inspiration. However, I could be completely wrong about this and nothing would surprise me.

Here I was distracted as two pizza delivery motorcyclists burst out of an alleyway and headed off in different directions. That gave me a clue and so I headed into the alleyway and found myself at the back of a takeaway pizza lace. My takeaway Vegetarian with my own vegan cheese (I always come prepared) was one of the best I’ve ever eaten. 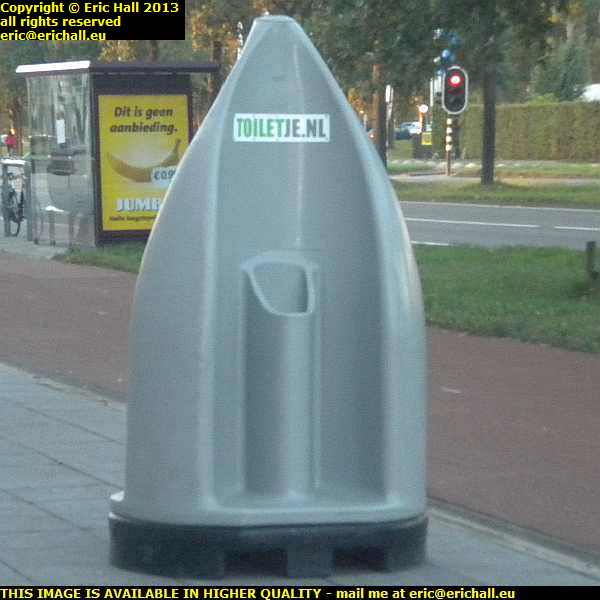 On the way back to the stadium in the dark, wishing that I had come here much earlier to properly explore the town, I encountered this object, right outside the football ground as you,might expect one such object to be. Whatever its proper name might be, I was told that the locals refer to it as the p155 house, and for very good reason too as you can see.

In fact I made very good use of it. I must stop drinking all of this flavoured water while I’m driving. It’s doing me no good at all, I tell you that. I’m not sure how I would have coped had I not found this artefact. It’s certainly a novel way to spend 1.2 centimes.

Mind you, it’s a bit disconcerting having to resort to something like this in front of a crowd of about 17,000 people trying to get into the Stadion Rat Verlegh. I mean, I didn’t want to give them all an inferiority complex. 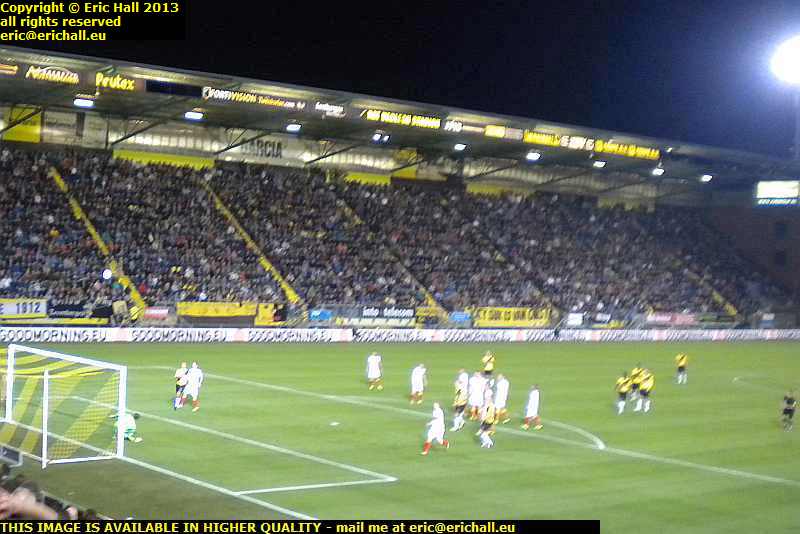 But that’s enough of me talking rubbish. Let’s concentrate on the football.

Tyhe quality was rather … errr … less than I was expecting for an Eredivisie match. NAC were, well, about average I suppose but Go Ahead Eagles were thoroughly awful and how they were in one place higher than the home side before the kick-off I really do not know. They had a central defence pairing of Lord Lucan and Martin Bormann and for the second quarter of the game they were quite simply torn to shreds. Its no exaggeration to say that 4-0 at half-time, all the goals coming in that 20-odd minute spell, was something of an understatement. 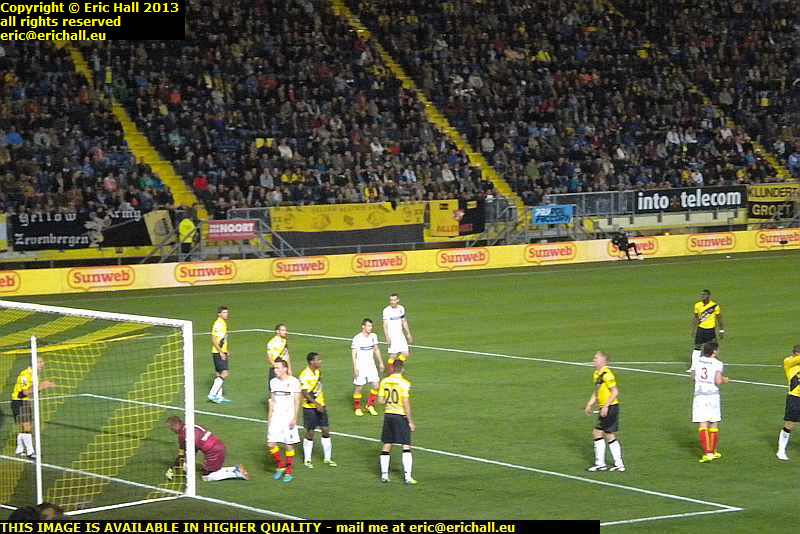 It will also come as no surprise to anyone reading this that the second half was a totally different game. Naive followers of the sport would expect the second half to begin with the Eagles having their heads buried in their boots and a bouyant bunch of Breda boyos bouncing out to run up a cricket score (mind you, 4-0 IS a cricket score when England are batting).

But no, Breda had gone right off the boil and were content to play exhibition football for a while, passing the ball around amongst themselves instead of going for the jugular.

This of course gave the Eagles some kind of respite and a couple of times they snatched the ball away and went racing off down the ptch to give the Breda defence some VERY ANXIOUS moments indeed. I remember thinking that if the Eagles scored twice (which they could so easily have done), there would have been an almighty panic in the Breda side and anything could happen. 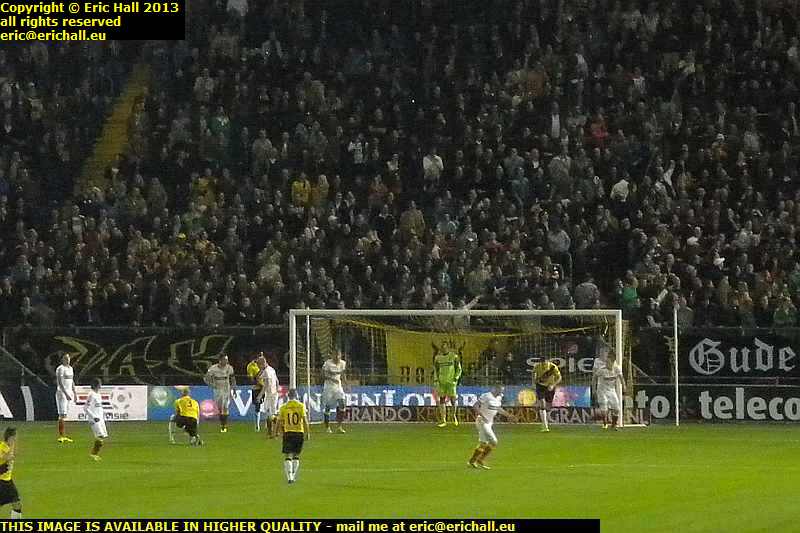 However the Breda defence stood firm and with just two or three minutes to go, they managed to pot a fifth goal to calm what was clearly becoming a jittery Breda performance. I don’t think that I’ve ever seen a side winning 4-0 look so nervous.

But I really don’t know why teams like this do this kind of thing. 4-0 up and looking good, and then going on the defensive for 45 minutes. They should have carried on with the allout attack, been 6-0 up after the hour, and then gone on to bury this team, instead of giving them a few easy chances to get back into the game. Really bad planning, this, and I would have kicked the players all around the stadium. A tight mid-table finish means that goal difference is all important when it comes to doling out the prize money at the end of the season and whenever you are given the opportunity, which doesn’t arrive very often for clubs like this, you should be going for the throat;

And on that note, I went home. Another one of my … errr … goals in life accomplished.