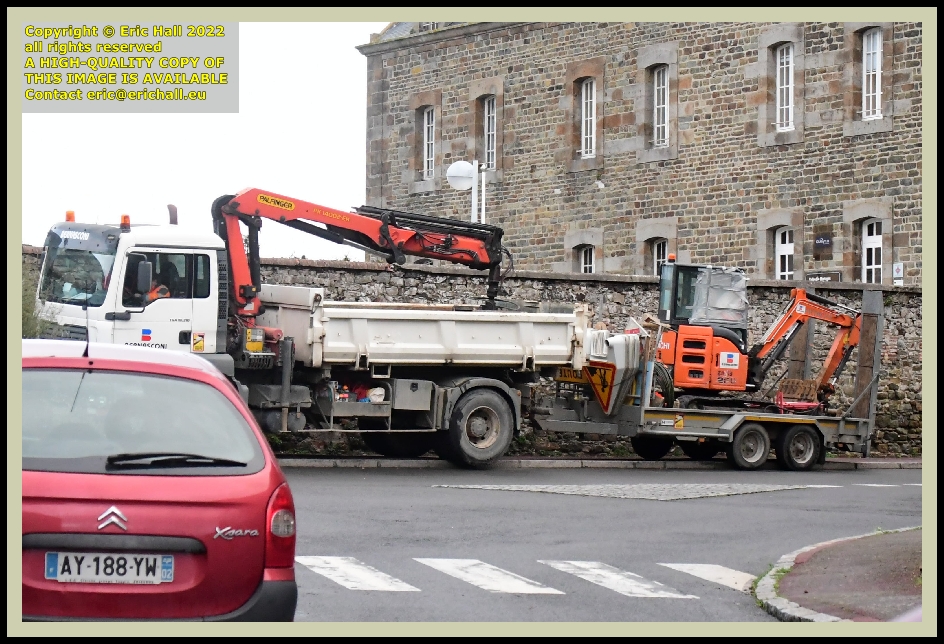 … the work in the Rue st Michel might be finished

While I was on my way back from my afternoon walk I noticed the lorry parked up at the Porte St Jean. It was busy pulling a trailer on which was loaded the mini-digger and various other bits and pieces that I’d seen down at the Rue St Michel.

And then it drove off with the trailer behind it and disappeared down the road. I went back home for my coffee and a rest.

And I’m not sure why I needed a rest because for a change, I’d had one of the best nights’ sleep that I’ve had for ages. Although I couldn’t summon up the energy to go to bed anything like as early as I was hoping, I was out like a light and didn’t awaken until the alarm went off at 07:30.

Definitely the Sleep Of The Dead last night.

There had been plenty of time to go off for a wander around during. I was at a party last night, getting my cat ready to stay with someone. I was rolling up some paper into a ball for it to play with. I was talking to one of these young bespectacled boys who know everything. We were talking about the moon. he asked if we could see it from where I was standing. At first I couldn’t, and then I saw it through the trees. He said that there was a planet just to the right of it so why don’t we go outside and look at it?. I thought that I’d take my camera with me as well. He said something about something that was on it. As we were preparing to go 2 of my friends turned up. They said basically “you don’t want to go out and look at that thing. It’s dangerous, horrible. I said that I don’t understand that because this thing, whatever it is, is a natural phenomenon and grows on the moon. It’s nothing man-made and nothing dangerous to which they said “okay, yes, we’ll take your word for it” so I started to prepare myself to go outside to have a look at the moon and this planet that was right close to it.

There was something to do with aeroplanes last night. I can hardly remember anything about it now but it was to do with some kind of Curtiss high-wing monoplane of World War I and I ended up flying a modern equivalent with an enclosed cockpit. When I returned home I ended up having to go for a shower.

There was something about Sir Lancelot Spratt in there as well from the “Doctor In The House” series but I can’t remember very much about that either except that it concerned medical students being drunk as in one of the old radio episodes.

So no attractive, interesting or exciting young ladies again last night. Those two nights a few days ago have really knocked me out of my stride.

After the medication I sat down to prepare for my Welsh lesson, and to my surprise, also to fight offf a wave of sleep. But anyway, I prepared enough of the appropriate chapter so that the lesson passed without any drama.

After lunch I came back in here and spent a while fighting off sleep again and doing a few bits and pieces here and there when I could. 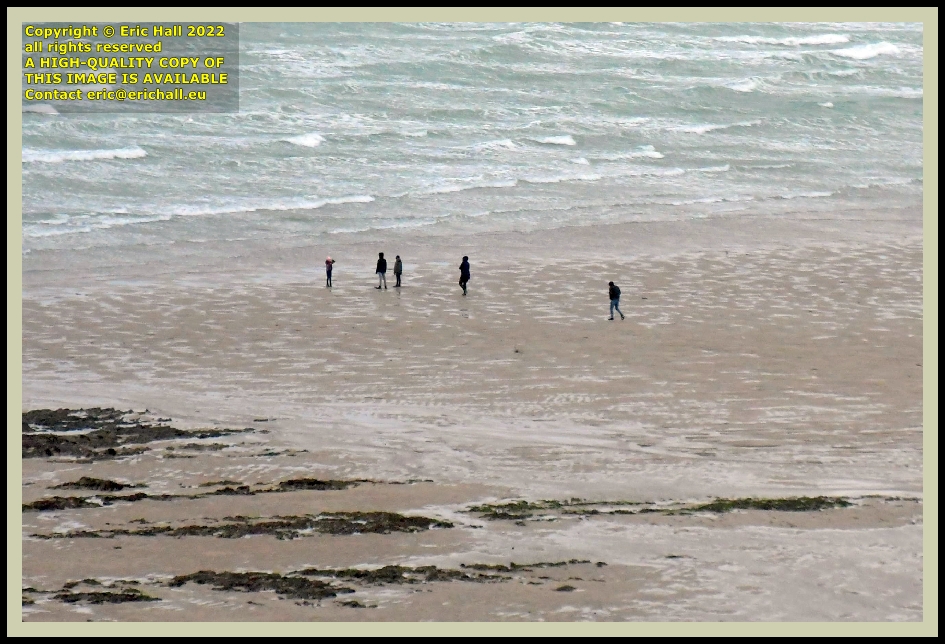 When it came to the time for me to go out for my afternoon walk, I wasn’t feeling at all like it and had the strong wind been blowing the other way to send me back into the apartment I would have gone in quite happily.

But instead I made my way down to the end of the car park to look out over the beach. Plenty of beach there today and even more surprisingly, there were quite a few people down there.

They were running around on the beach heading out towards the water, although what they were going to do when they arrived there was anyone’s guess. So I left them to it and pushed off down the path, all on my own, which is just as well with 271,686 cases of infection today. 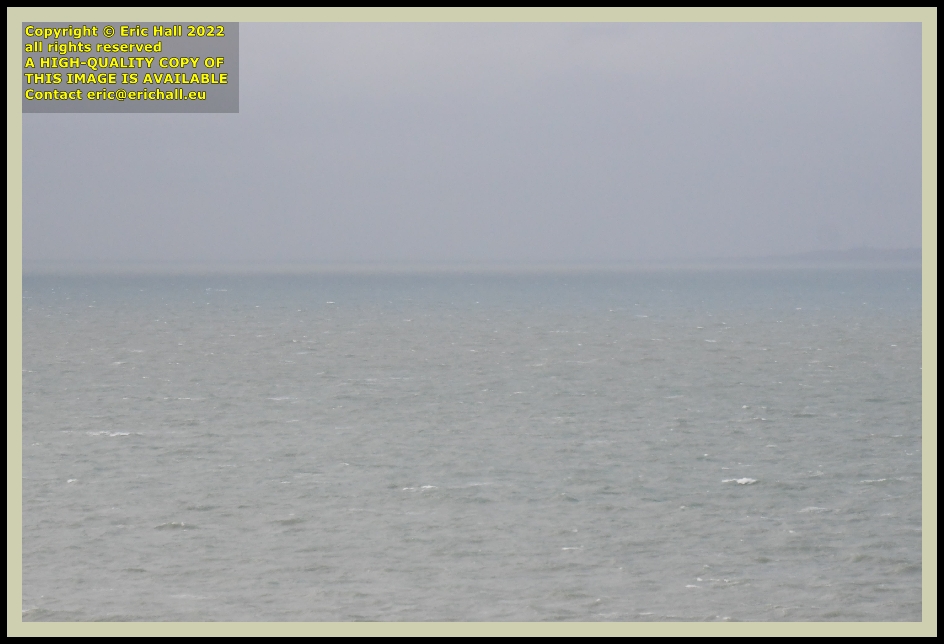 The wind was one of the strongest that we have had for a few weeks and for a change it was blowing from east to west.

And that was quite lucky because out at sea in the Baie de Granville there was a heavy rainstorm that was obscuring the Ile de Chausey, but the wind was blowing it away from me and out to sea. In fact, you could see plenty of puddles around on the path from earlier in the day.

No fishing boats out there that I could see either. They must be either in port or else far out at sea this afternoon, hiding in the rain squall. 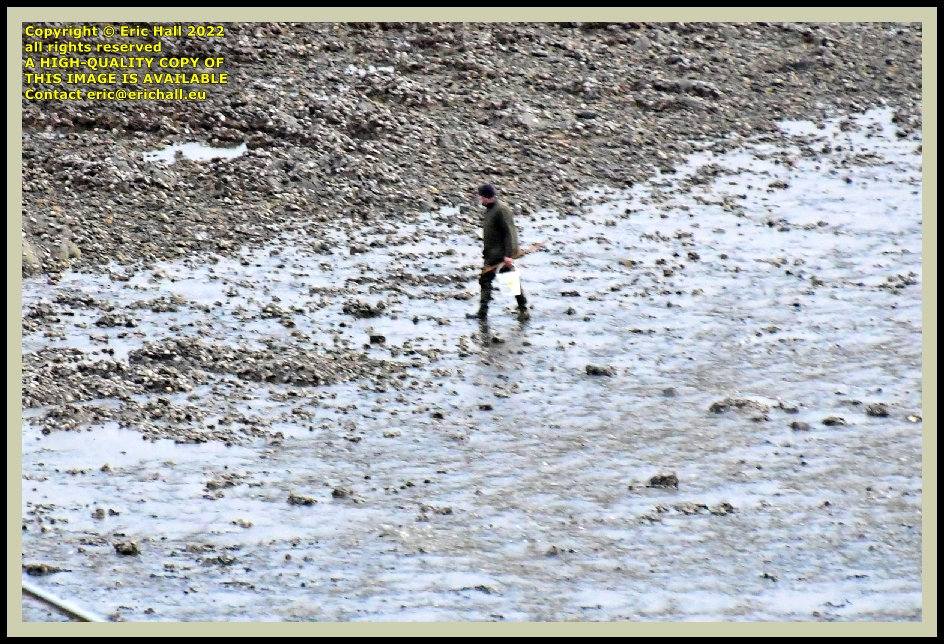 Nothing whatever happening down at the end of the headland this afternoon, or down on the bench by the cabanon vauban.

There was however plenty of action out on the rocks. Although the tide wasn’t as far out as it might be, there were still plenty of people out there at the peche à pied.

And we’ve already had all of the discussion about what pied they might be peching for, following the discovery of an old boot with the remains of a human foot in it not so long ago, so I’ll spare you any further discussion.

There was nothing else going on so I headed off down the path. 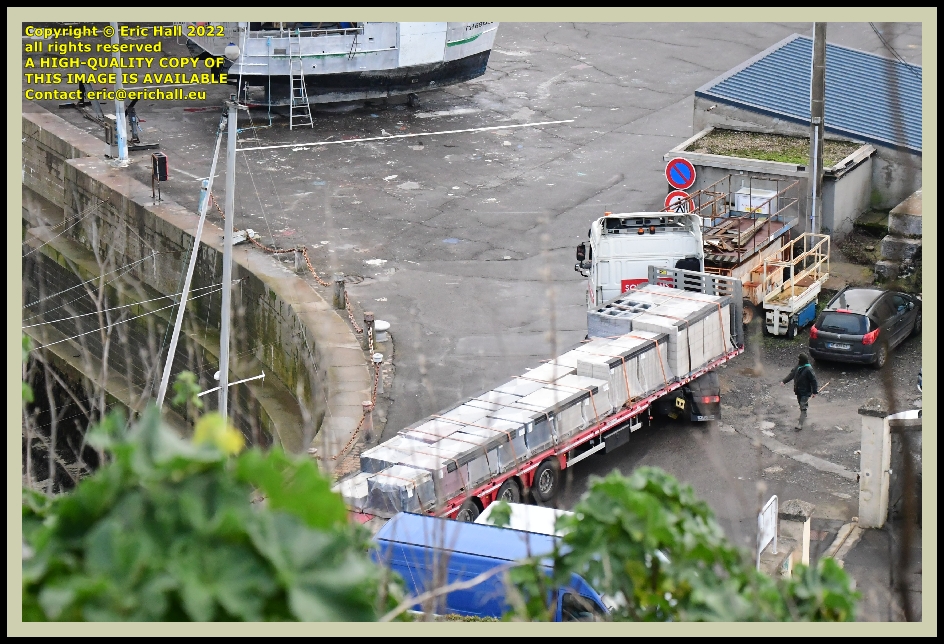 While I was walking down the path towards the port I saw an articulated lorry loaded with building material heading along the road.

It’s very, very rare to see such a lorry heading to the old walled town so I watched it for a minute or so, when it turned into the chantier naval, not without a great deal of difficulty.

“What’s going to be happening in there?” I asked myself, because I couldn’t see anything that would require a load like that, but the lorry simply did a u-turn, left the chantier naval and headed back into town again.

It looks as if he was looking for somewhere else and had taken the wrong turning. Maybe he’s loaded up with stuff that’s supposed to be going to Jersey on one of the small freighters. 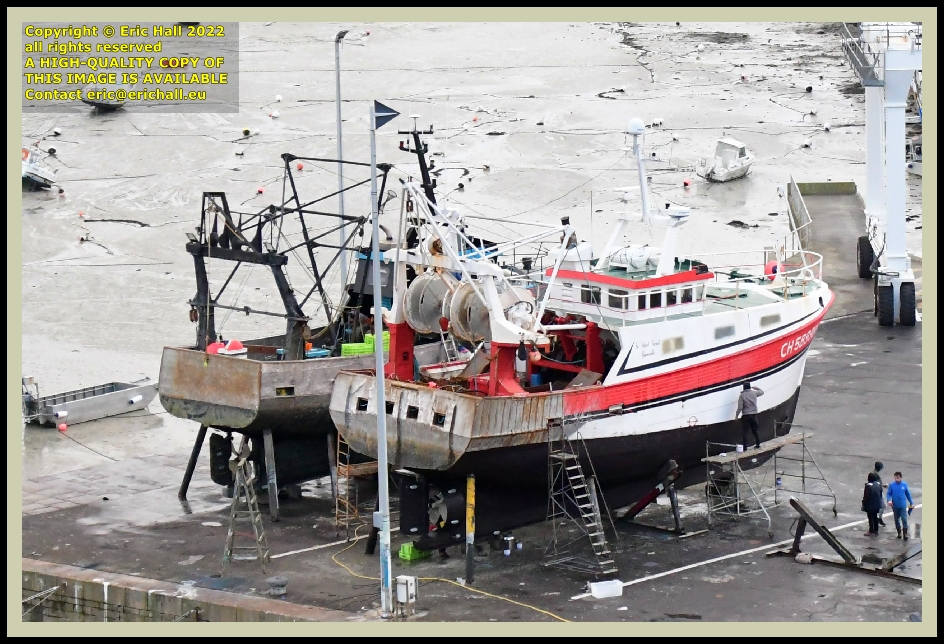 On arriving at the chantier naval I could see that there has been yet more activity down there since I last visited.

La Bavolette II is still down there up on the blocks along with Gerlean who hasn’t moved for a week or so, but we now have a new arrival. Although I can’t see her name or her registration number, her colour scheme suggests to me that she is in fact Pescadore who we have seen in there quite often.

And it’s good to see the chantier naval back working again. It was very quiet while the portable boat lift was under repair.

Nothing much else happening down in the outer port with the tide being well out, so I wandered off towards home and my coffee. 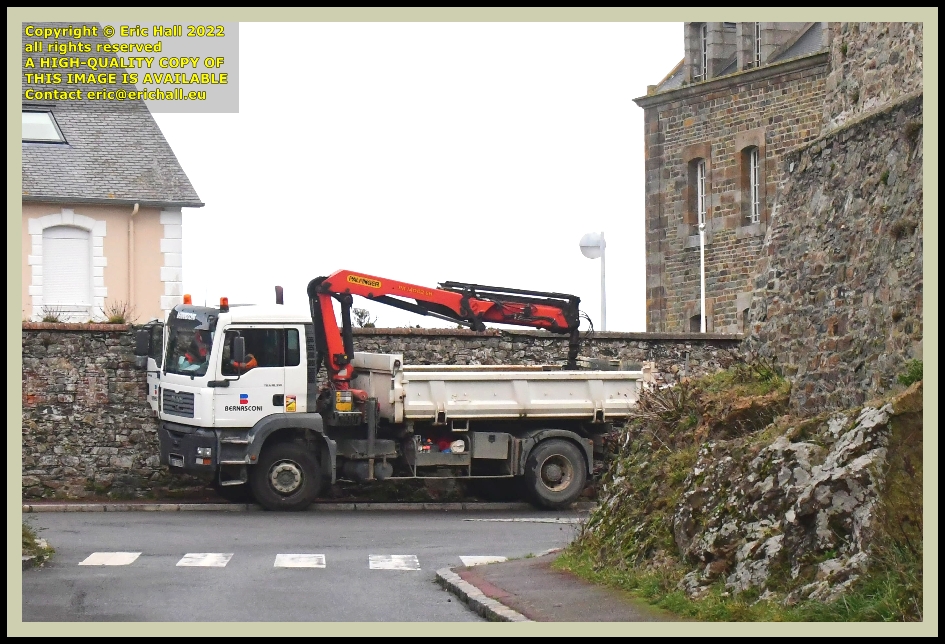 On the corner of the Boulevard des 2E et 202E de Ligne and the Rue st Jean I came across the lorry that I mentioned earlier.

And seeing it loaded up ready for moving off gave me the idea that tomorrow on my way to the doctor’s, if I remember I’ll go that way and look at what they have been doing and what the finished result will be.

Back home I had my coffee and then came back in here. And to my shame, I crashed out good and proper, just as I used to do a few months ago and which I thought that I’d passed through.

How disappointed am I that I’ve slipped back into my old habits just as I thought that I was improving.

Tea was some veggie balls with steamed veg with vegan cheese sauce and it was totally delicious. I really enjoyed that meal.

But right now I’m off to bed. I’m not tired, having had a really good sleep this afternoon, but I have to show willing. It’s high time that I cracked on with some work.