… home actually seemed to work a lot easier than going home the normal way. So if ever my 07:17 from Brussels is cancelled in the future and I can’t have another cheap ticket any other way, I’m going to consider quite seriously going this way home again.

The alarm was set for 06:00 but it was pretty much a waste of time because I didn’t have much sleep at all. The heating made so much racket that in the end I went down and switched it off, and then I ended up with people talking outside my door for what seemed like hours.

Nevertheless I was up and about as soon as the alarm went off and it didn’t take me long to finish packing and to make my sandwiches. There was even time for coffee and toast for breakfast.

During the night despite the lack of sleep I’d been on my travels again. We’d been having a history class at University but the teacher hadn’t turned up so we’d been running it ourselves. He finally turned up and started, going round the class talking to each one of us. He mentioned to me about going round to teach his daughter guitar if I was free at 17:30 that evening. When I left work I went to park up somewhere to wait. After a while I thought that I’d better ring Laurence to tell her where I was, that I’d be late. She had obviously been asleep because she was very slurred with a tired voice. She just muttered something about the management but I didn’t hear a thing after that. Then I realised that I didn’t have my guitar so I thought that I’d better return to the office and fetch it.

We were all in a car somewhere. We turned up at a house where we were supposed to be. I couldn’t get my car into the drive because the cars were parked too far close up. I had my brother move his car but there still wasn’t enough room which I thought was really strange. Then I realised that the one on the left was too far over so I pushed that out of the way so that I could drive in. Parked in there was the red Opel coupé of a girl whom I knew, really rusty and rotten. Whoever it was with me said “no tax again”. I replied “it’s taxed until June”. Then I had a closer look and it was June 1988 in the window. I said “that sounds just like her, doesn’t it?”. We walked round the back of the house to go in ready to see the lighting of the Christmas tree. 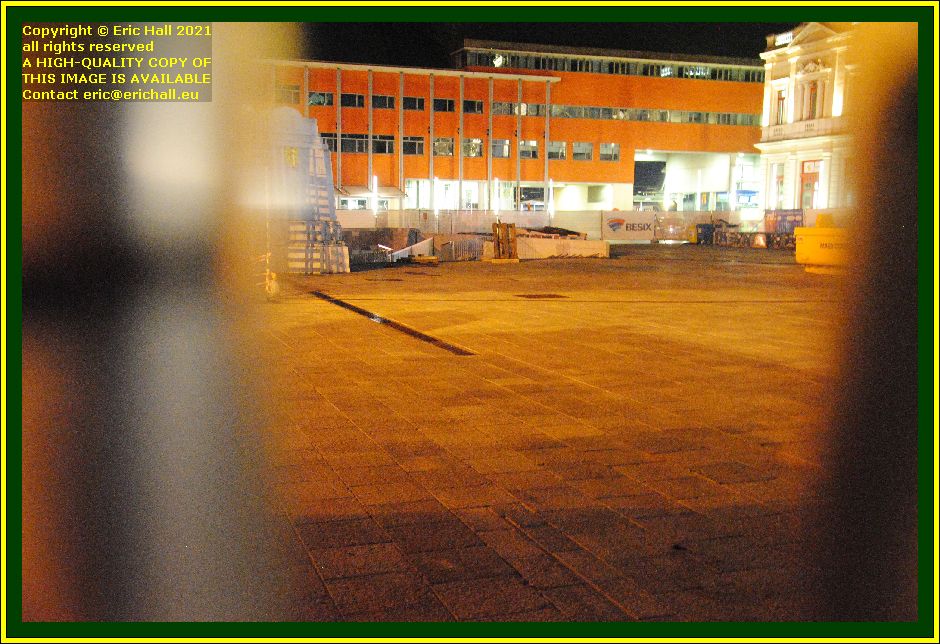 The work that’s taking place in the Martelarenplein outside the station is another one of these tasks that seems to be taking forever. It’s been going on for a couple of years now and progress seems to be very slow.

The fencing is still all around the work so it’s very difficult to take a photo, and the dark early morning doesn’t help very much either, but I did the best that I could in the circumstances.

With having set out so early, I was well in advance of my timetable and luckily, there was an earlier express train, the 07:21, so I didn’t have to wait too long because it was absolutely taters out here and I wish that I’d brought a coat.. 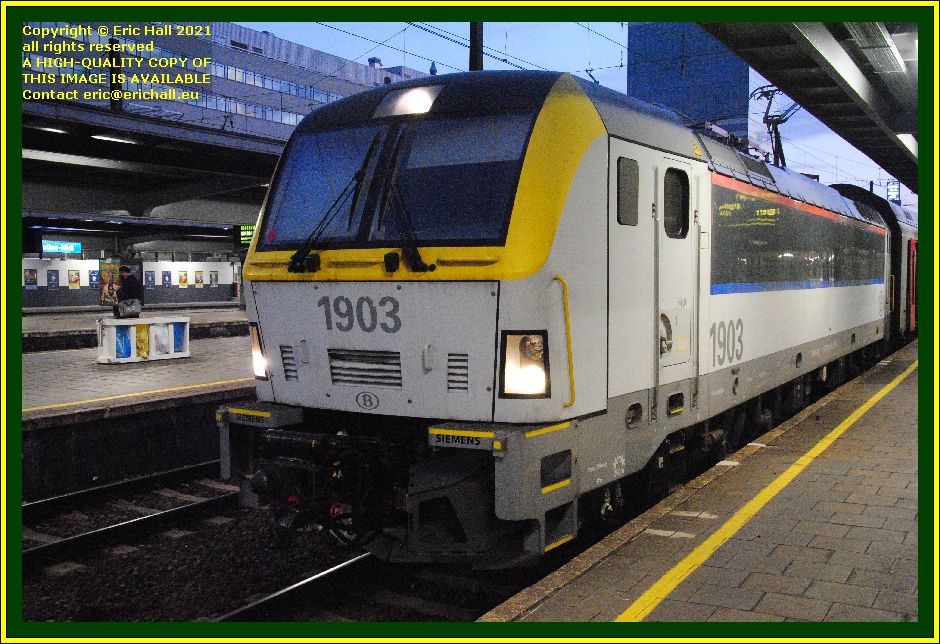 The train that came into Leuven was pulled by, despite its number, a class 18 electric locomotive of the type that we catch quite regularly.

In the darkness I couldn’t see anything of the journey, but we pulled into Brussels with 45 minutes to go before my train to Paris.

And sitting on a draughty station in this weather for that long froze me to the marrow. If there’s a waiting room at the gare du Midi I have yet to find it.

Luckily though, the train came in early and we were allowed to board pretty quickly, which was just as well 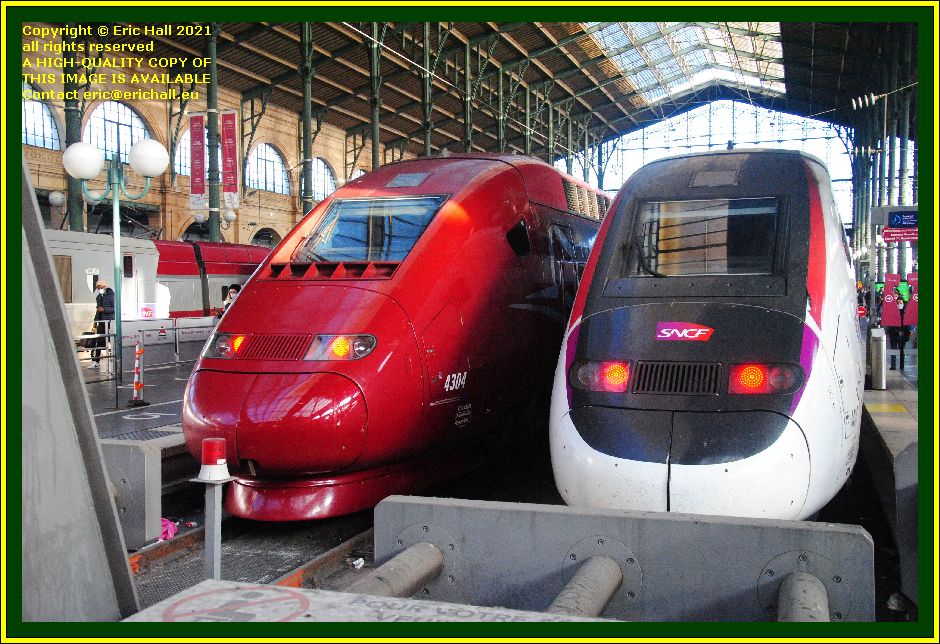 The train that I’m on is one of the PBKA – Pars, Brussels, Cologne, Amsterdam – trainsets, the one on the left in this image taken at the Gare du Nord in Paris.

having scrambled aboard the crowded train to warm up, I found myself sitting next to a Chinese student who was confused about the application of the Eurorail pass. He didn’t realise that there’s a supplement to pay on the TGV and so he was stuck for an excess charge.

This train is a direct one to Paris. No changing at Lille, which is good news for me because the walk is a painful one in my state of health.

As I have said before … “and on many occasions too” – ed … I don’t know why the train from Lille to Paris goes from a different railway station to the one that the long-distance TGVs use.

Much of the route to Paris was spent catching up with my beauty sleep so I was wide awake when we arrived in Paris. I had to show my vaccine passport on arrival and then go to look for RER track E.

It’s actually quite a walk but it’s on the level with no obstructions and on a really good surface so it didn’t seem like too much effort.

Down in the bowels, I didn’t have long to wait for a train. Much more comfortable than the metro, rather like a cheap mainline multiple-unit in fact, and it was only 15 minutes to the Gare St Lazare.

There was quite a walk from there too but once more, it was all on the level and going up to the station was on an escalator so there wasn’t any struggle with the baggage. 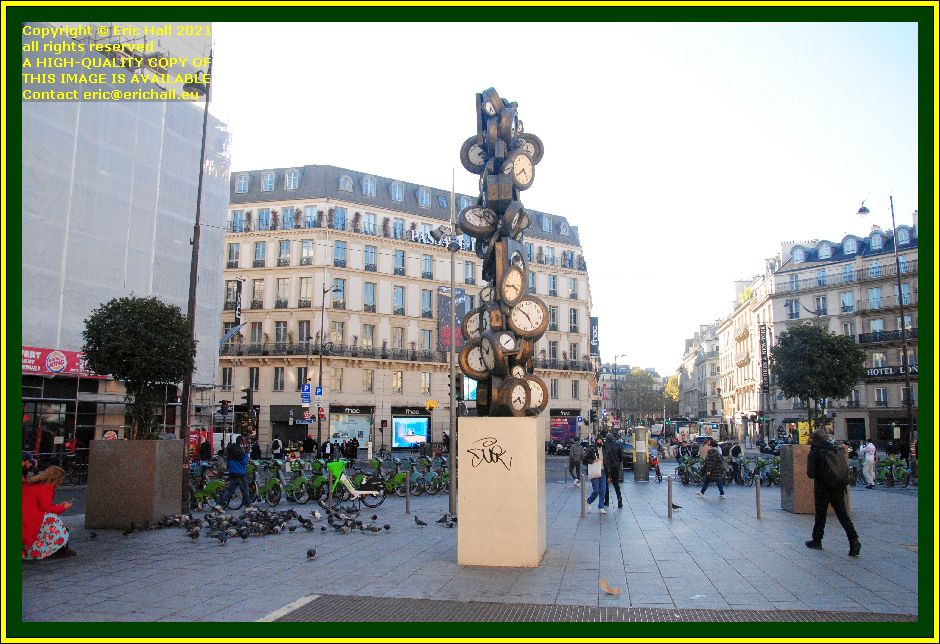 According to my notes, I’ve never been to the Gare St Lazare before so I went outside for a look around as I had some time.

This was quite interesting, all of these clocks. It’s a design by someone called Armand Fernandez, known as “Arman” and not “Arman in Havana”, and was commissioned by the French Government in 1985.

The station is pretty cramped in its surroundings by other buildings and nowhere is it possible to take a decent photograph. 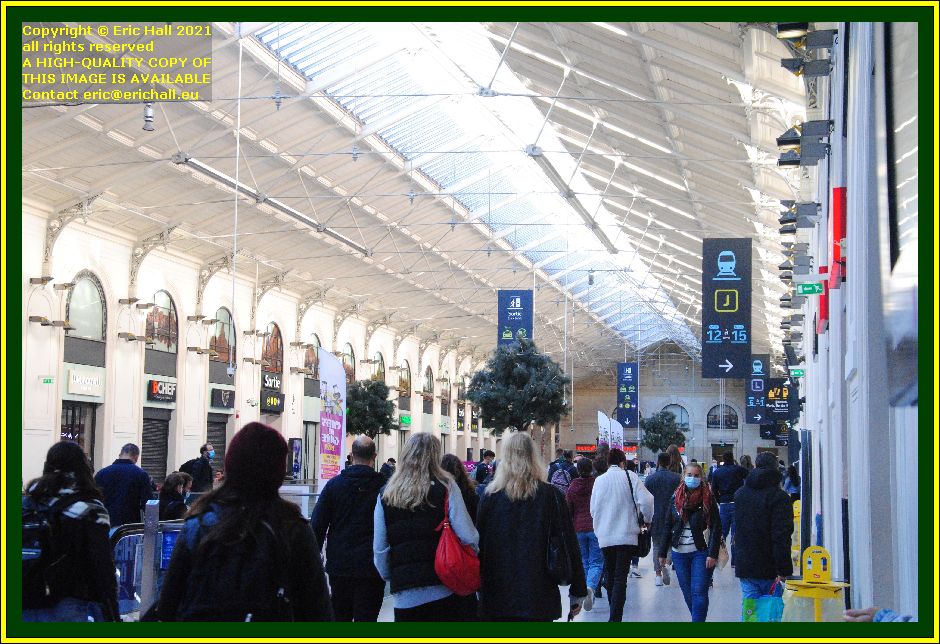 Inside the station though, it’s light and airy, having been modernised and upgraded about 10 years or so ago.

It’s not very easy to navigate though as the destination boards and platforms aren’t very clearly indicated.

And while finding where the platform that I need is one thing, finding my way onto it was something else completely.

There’s a “magic eye” that reads the QR code of your ticket, but the eye isn’t where you expect it to be and it took me 5 minutes and the assistance of a passer-by to enable me to find a way to pass the barrier. 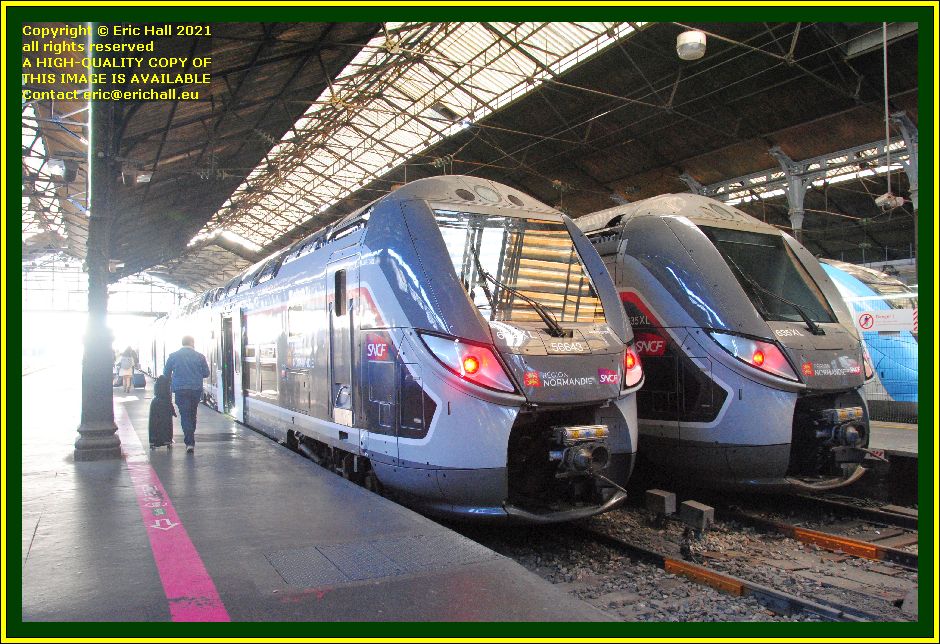 My train is a newish double-decker multiple-unit, a class Z 56600 Electric Multiple-Unit “Regio 2N” double-decker built by Bombardier and entered service in 2014.

It has all mod cons and is very comfortable. Furthermore it’s non-stop to Caen and it doesn’t hang about either, with a top speed of 200kph.

It’s certainly worth remembering this route for the future if ever there’s a perturbation on my regular route. And if they do electrify my line, something that is under discussion right now, we might even see these in Granville which would be nice. 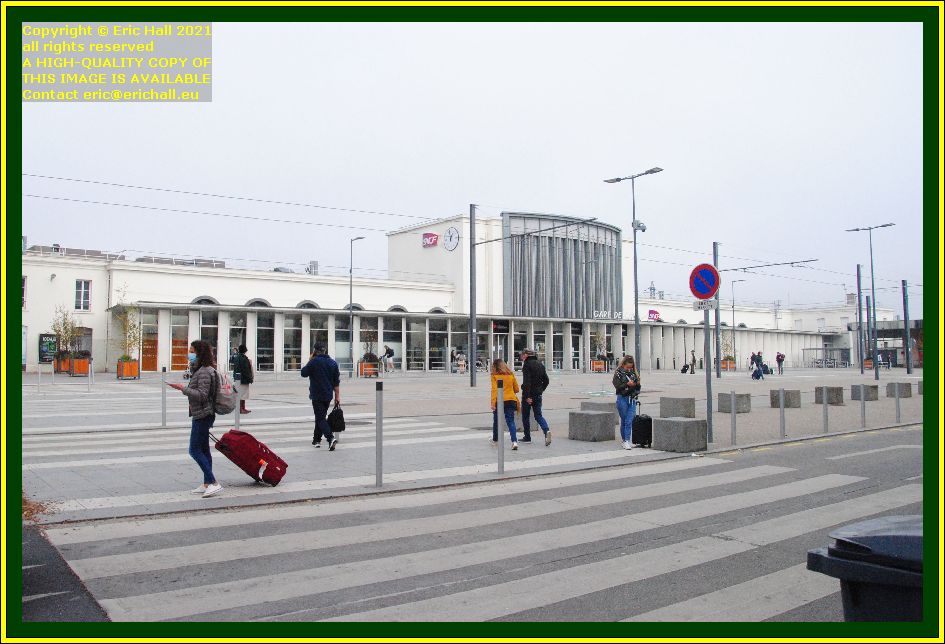 At Caen there’s a one-hour wait for the train to Granville so I could go for a walk around outside.

No problems with photographing the station here because there is very little to obstruct the view. i’ve actually been here once before, but not on a train. I came this way on the bus once when there was a rail strike and we stopped here for a breather

It’s not the original railway station of course. Like so many others in the battle zone in Northern France, it was heavily bombed during the early summer of 1944 to prevent the rapid deployment of Axis forces by rail. 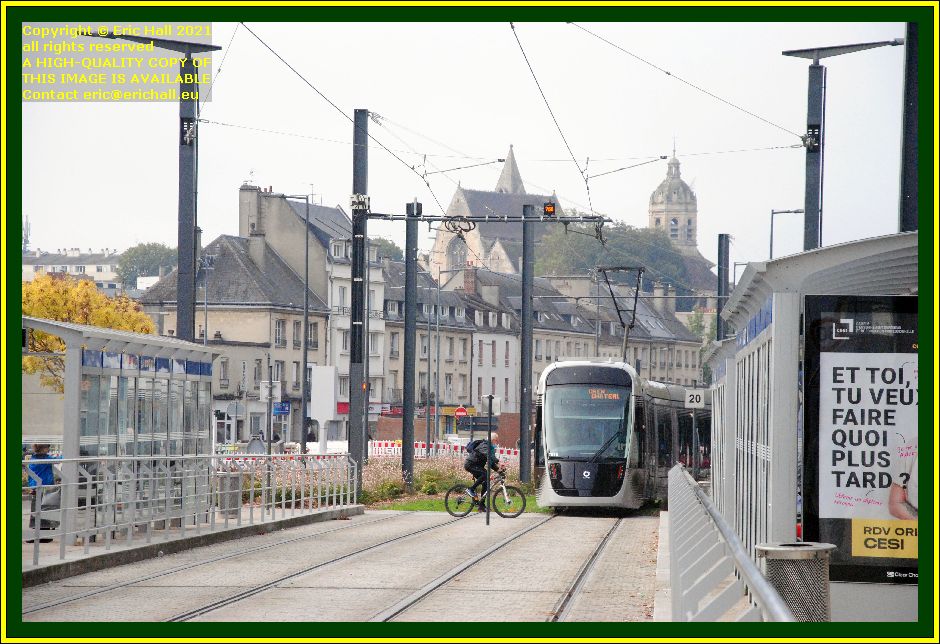 Further down the street in the distance above the tram is a church that I think is the Eglise St Michel De Vaucelles.

There was a church on this site in the days of Charlemagne but there is no trace now of any remains from this period. The church that we see today dates from the early part of the 12th Century although it has been heavily modified since then.

It’s one of the starting points for the pilgrimages to the Mont St Michel.

By now it was lunchtime so I went back inside to eat my sandwiches and I actually treated myself to a mug of hot coffee. I’m really pushing the boat out these days, aren’t I? 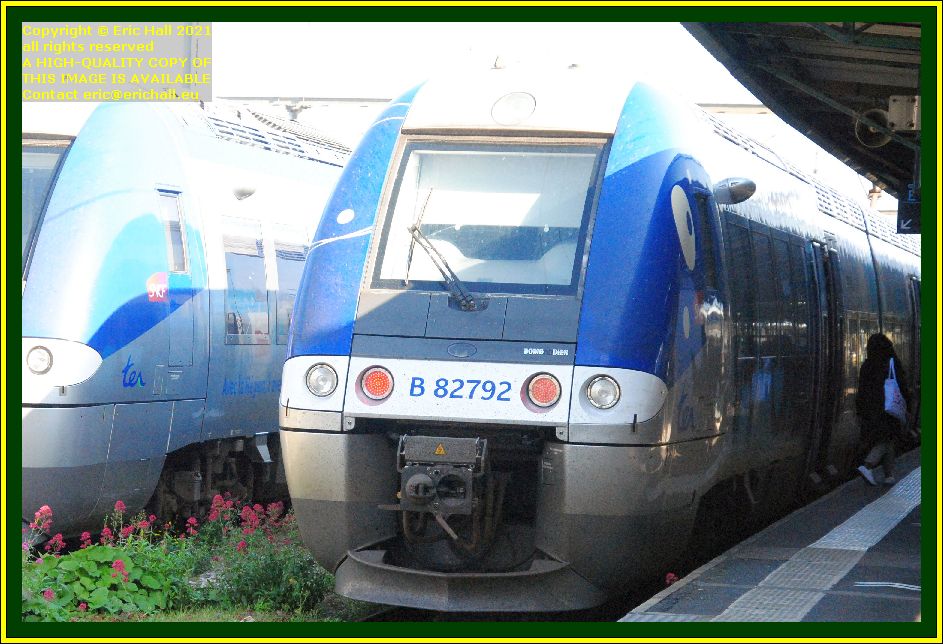 The train that I catch from Caen is one of the Bombardier units that we have seen quite regularly in Granville.

It’s quite bizarre because there are only four power points per carriage and they take some finding. I had to wait for half the journey before a seat at one of them became vacant.

But imagine that! Just four power points, and in the 21st Century too!

These trains are little branch-line rattlers and not as comfortable as the one on which I’ve just been travelling, but at least it does its job and brought me back to Granville. 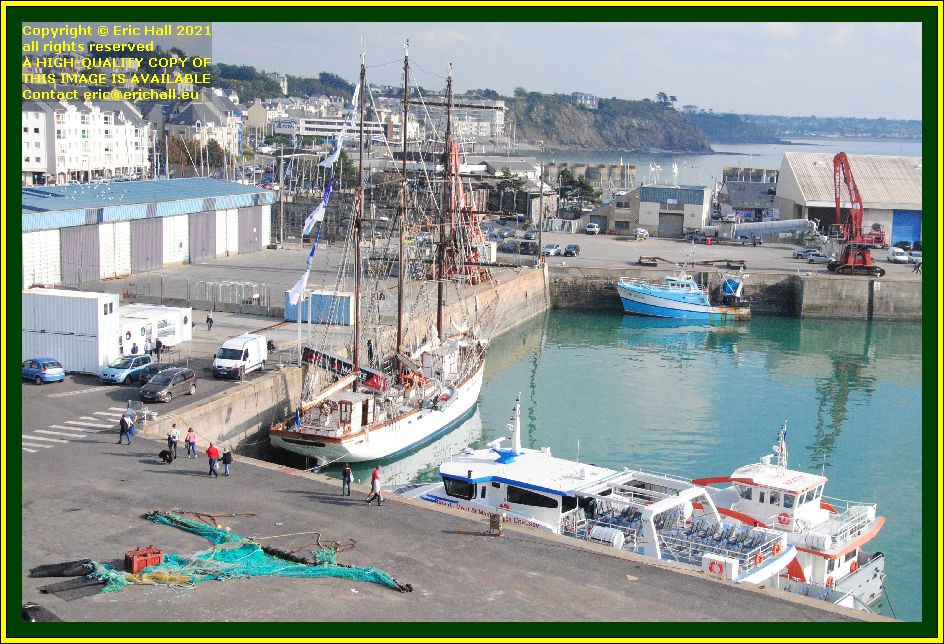 Coming back home was easier than it has been recently. I only had to stop four times coming up the hill to home.

One of my stops was at the viewpoint overlooking the inner harbour. Marité is down there of course, with the trawler Philcathane across the harbour on the other side.

Down here close to me are Belle France, the new ferry for the Ile de Chausey, and Chausiaise, the little Chausey freighter in orange, grey and white.

By the looks of things too, there’s someone having a go at mending his nets on the quayside too. 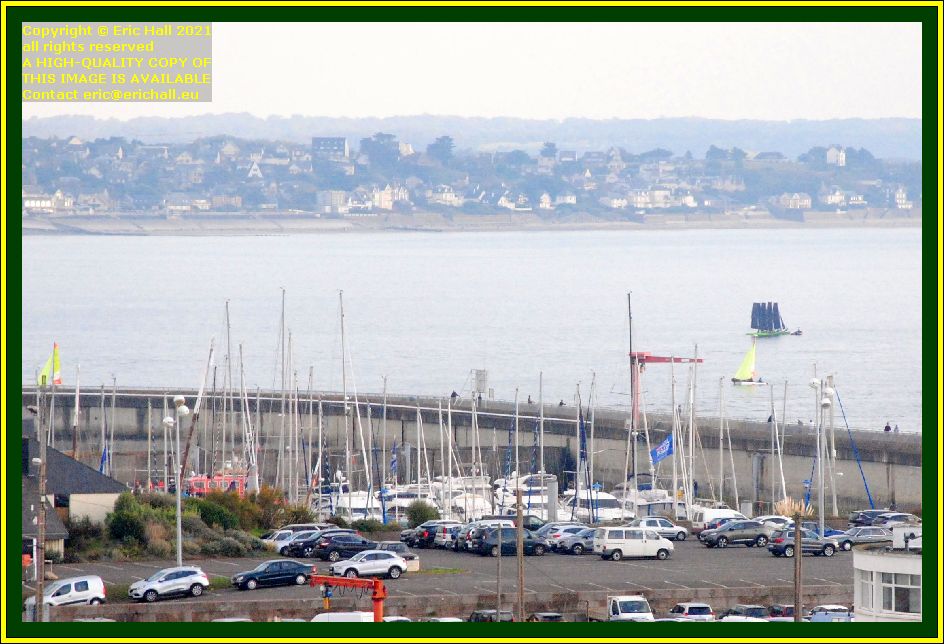 Further up the hill at another one of my rest stops I could see that the sailing schools were in full operation today.

There are a couple of the yellw and orange ones having a sail about, but the black ones seem to be having a conference of some kind.

Arriving back at the apartment I made myself a coffee and reflected on how nice it was to be back home. And only four stops coming back up the hill with the load that I had in my suitcase was quite some progress compared to how I’ve been just recently.

Football later on, in the Welsh Cup. Colwyn Bay of the 2nd Division against Cardiff Metro of the 1st. A game rather short on skill and technique, but a proper cup-tie all the same played in front of a big, noisy crowd. Cardiff Metro had most of the play, missed a penalty, had a goal disallowed for offside and missed three or four absolute sitters.

Colwyn Bay, who were on the back foot for most of the game and only had one real shot on goal. And so, as you might expect, Colwyn Bay won the game 1-0 to move into the next round.

Now that I’ve had tea, I ought to be going to bed but I’m not tired right now. I’ll go to bed at about 03:00 I suppose and then sleep through until tomorrow afternoon.