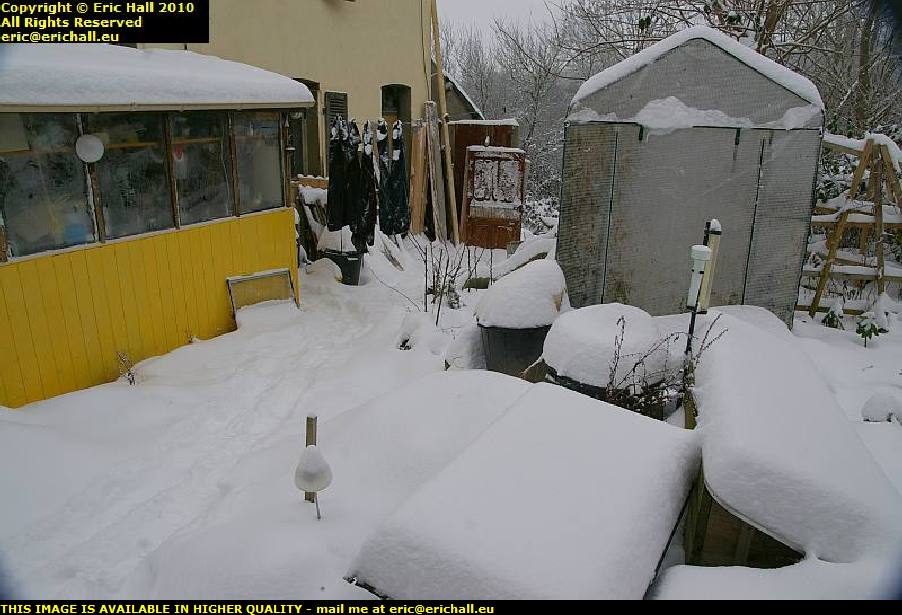 … today was even worse. I woke up in pitch darkness – whose idea was to to put windows in the roof? – and so first job was to clean off the solar panels. About 10cms of snow had fallen through the night but of course I didn’t realise this at first and went outside in my clogs. Fatal mistake – so I came in, changed my socks and put on my apres-ski boots, and went back outside.

Mind you I needn’t have bothered with the panels – despite being on the roof on several occasions there was not a glimpse of sun at all and I managed the grand total of 0.9 amp-hours all day. 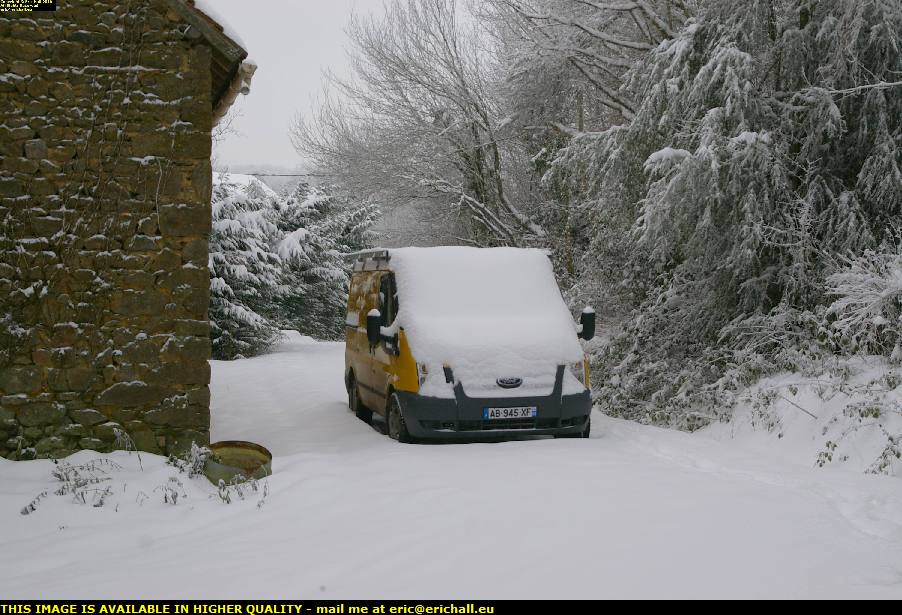 Everything and everywhere is frozen up – the temperature didn’t rise above -3.2 in the verandah and the maximum outside was a balmy -4.9. The baker never made it – I would have been surprised if she had – and I spent the morning insulating the floor under here. I couldn’t do much though – the cold defeated me again and so I gave up and came in to watch the three remaining westerns from that batch I bought in Brussels.

, starring John Wayne, is easily and without a doubt the worst film I have ever seen. Of course, genre, script and all that kind of thing are subjective and I would never judge a film on my particular taste, but in this film the script was appalling, the over-acting was terrible, it was packed with non-sequitors and for some reason that only the editors will know, 2 minutes of action appear to have been cut gratuitously from the film so that you have a girl being chased by two bandits cut immediately to the two bandits lying on the floor and telling their boss “the man who intercepted us took her that way“.

Mind you, scientists today make such a fuss of their new techniques, including the monstrous scenario of human-animal embryoes. I don’t know what the fuss is all about. These experiments have been going on for years and the make-up of the OUSA Executive Committee will show you what happens when it all goes wrong. But there were indeed some early success stories, as this film will bear witness. What other reason is there for the appearance of a character played by an actor called “Buffalo Bill”?

, starring Gene Autry, the … errr … “Singing Chronologically-challenged Cattleperson”. Now I’m not sure why he’s cast as “the Singing Cowboy” as there isn’t one cow in the entire film, and why these men are described as “Riders …” when they spend more time in aeroplanes than on horseback I just do not know.

But this is a fascinating film because of the plot. It’s from the late 1940s and there’s a plague affecting a forest of pines in the Rockies and which needs to be eradicated. Now the goodies (including Autry) in this film want to spray everywhere and everything with DDT whereas the baddies go around spreading scandalous and spurious rumours about the damage that this will do to the rivers and the wildlife. Of course, Autry and the pro-DDT-ers win the day.

But can you imagine it? Can you really credit a storyline such as this given what we know today about DDT?

The third film is the legendary Howard Hughes film The Outlaw

. As well as his aviation and technological interests Hughes also “dabbled” in Hollywood and The Outlaw was a film that he directed and produced. You could be forgiven for thinking that bearing in mind his immense wealth Hughes on Hollywood might be expected to have been just some kind of vanity gimmick or publicity stunt but believe me, there are many many worse directors and producers around than Hughes, who is much better than he might have been expected to be.

The film is in effect the story of the outlaw Billy the Chronologically-challenged Goat and was the breakthrough film for Jane Russell. Hollywood is of course well-known for its aspiring young actresses and the relationship that they might or might not have with directors and producers in order to capture a leading role is the subject of much speculation. If these rumours are true, then it might explain Hughes’ interest in Hollywood and his interest in Russell. She is quite attractive and is also a much better actress than she might otherwise have been. She is possessed of a couple of points well-worth attention, for which Hughes turned his technical abilities into inventing a cantilever brassiere in order to give them much more prominence.

In fact, it was Russell’s … err … physical attributes that led to the cult status of this film. In one scene she leans over the dying Billy the Chronologically-challenged Goat and the camera has a zoom shot all the way down her top to her navel. In 1941 this was far too much for the American censor who demanded that the scene be cut. Hughes refused and a stand-off took place that lasted for several years. After World War II attitudes were much more relaxed and the film was finally granted a release but black-and-white was obsolete and the film was generally out of date (the soundtrack is depressingly old-fashioned even for 1941) so it never received the prominence that its hype had promised. It is also spoiled, irreparably so, by the dreadful acting of Thomas Mitchell, who plays Pat Garrett. Mind you, there us a story that when the film was shown to an audience of airmen, the scene where Russell leans over the dying Billy the Chronologically-challenged Goat was met with a cry of “Bombs Away” from one of the airmen.

That scene is of course in the film but the other famous scene where Billy and Doc Holliday confront each other over Billy’s theft of Doc’s girl and Doc’s theft of Billy’s horse, to which Billy replies “well, Tit for Tat” – that doesn’t seem to have made it onto the DVD.

I had a quick tea again tonight as I wasn’t interested in staying downstairs long. It’s minus 4 in the verandah, minus 5.8 outside and on my ad-hoc snow table there’s a depth of 18mm. And it’s still snowing. The sunny days that we were promised in the long-range weather forecast – they’ve gone too.