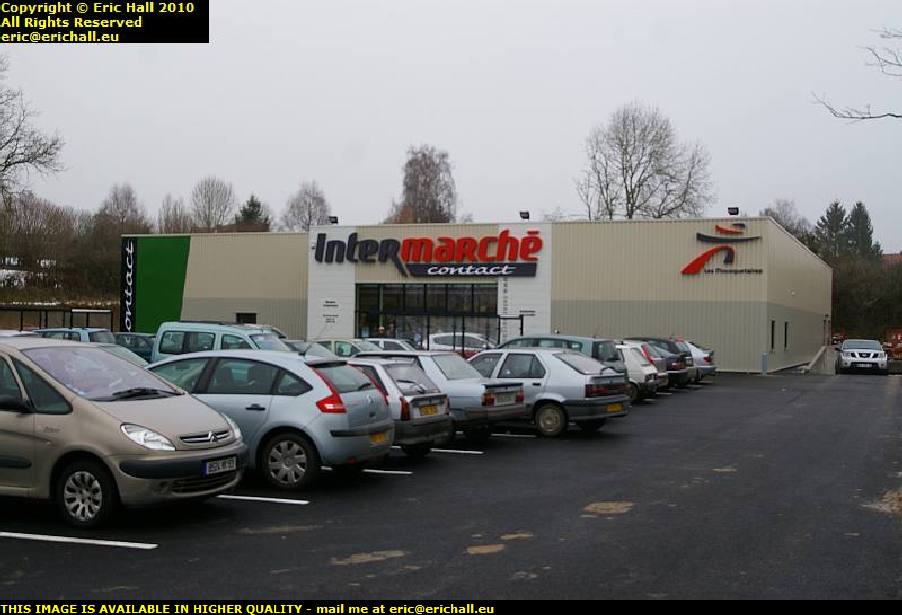 The new Intermarche at Pionsat opened its doors on Wednesday and yesterday Liz went there for a look round. She was ever so excited – they had some kind of prize draw there, and she had won a flight in a helicopter!

Anyway, I reckoned that seeing as how I had to go into Pionsat yesterday anyway, I’d go and have a nosey around in there. First thing I did was have a go at the prize draw but of course my usual luck held out and I won b*gg*r all.

Never mind, I went for a wander around and I was quite impressed. They are clearly “mindful” of the large “Alternative” community that exists round here. Tons of pulses, dried herbs, infusions, all that kind of thing (and at a price too, though, it has to be said) and a really good “bio” selection. They are also just as clearly “mindful” of the large British community living round here. Heinz Baked Beans and Typhoo tea bags were just two of the dozens of traditional British products on sale. They even had Hartley’s Jelly, something that I have never ever seen anywhere this side of the Channel.

And of course that reminds me. I worked in Brussels for several years and one day one of my Belgian colleagues came up to me. “What do you call that dessert that you Brits eat and it goes ‘brrrrrrrr’ when a lorry drives past?“

Another exciting thing about the Intermarche was some publicity from the local taxi company offfering some kind of limited stage carriage service from the local area into Pionsat and from Pionsat to Clermont Ferrand and Montlucon. They even advertised a shopping service – you phone up the shop and place your order, they go round and pick it up and bring it to you, for €5:00. It’s not quite “Tesco at Home” but it’s still some kind of gesture to the 21st Century.

And seeing that advert prompted me to do something that I vowed that I would never ever do even if I was dying of hunger and the bailiffs were hammering at the door, having spent 25 years of my life doing it. I went round to the taxi company’s office and, mindful of the fact that they were advertising a whole host of new services, I suggested to them that they might feel the need to engage extra drivers and if so I was available on an occasional basis. So I now have to fill in a CV and a letter of motivation and we’ll see what happens.

I must be off my head.

But the most exciting thing occurred as I was wandering around the Intermarche. The woman from Luxembourg who lives up the road a way from here and uses my e-mail address when she needs to order anything – she was in there and she came over to me saying “here – have this!” And it was A RIDE IN A HELICOPTER. She had won it and she had absolutely no intention of doing anything that involved taking more than one foot off the ground. All in favour of terra firma – the more firma, the less terra. I was ever so impressed, and ever so grateful.

And I’m still in great demand here. Apart from Liz on the phone I had one of these cold calling canvassers. By the time we finished our call I had the latter cursing and swearing at me down the telephone. Serve them right – I hate them. And not only that I had a visit from the mayor’s office. Firstly about the census and would I like to participate by filling in a form. And secondly it was a fact-finding mission as there appears to be some confusion about the land that I want to buy from the commune. One of the councillors wanted to see precisely what it was that I was wanting.

With all of that, I haven’t done much here. I have an “outside wall” in the stairwell where I wasn’t able to put any insulation to stop the heat leaving the attic. I found some thick corrugated cardboard boxes and flattened them out to use. If homeless people can live in them then they must be some good at insulating and it does seem to work. It’s quite cosy in here even without the heating on.

But I did fit the vertical that I cut yesterday. I also trimmed it to take the horizontal battens that will support the plasterboards. And I’ve made a start on the next one. While I was looking for a suitable chevron I came across some stuff such as guitar leads that I’d been looking for for a while.

All in all, on balance I’ve had a really good day today.