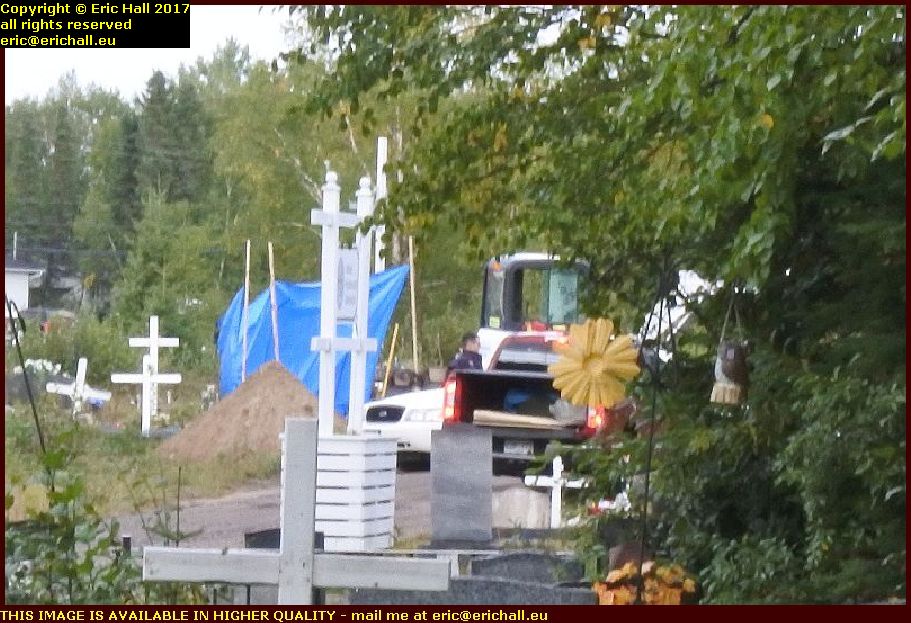 Our Hero, quite casually and lightheartedly to man in digger –
“what are you doing? Putting them in or digging them up?”
Two men in suits – “We’re police officers. Would you mind leaving the scene immediately?” (You could easily imagine the “or else …”)
Later that evening on Goose Bay Radio “following a court order obtained by the Royal Canadian Mounted Police, an exhumation was carried out in Happy Valley Cemetery this afternoon …”

Yes, it’s all been happening here today, hasn’t it?

Last night was another rather restless night.

I seem to be having them in cycles just now – a batch of good nights followed by a batch of not-so-good nights. And it’s annoying in a way, but can’t be helped.

But I did manage to go out on my travels last night, which is a good thing. It involved my red Cortina estate XCL 465X. The back axle had locked up and so I had taken it for repair. When they opened the halfshaft, a pile of water, not oil, flooded out.
“Ohh, we’ll have to wait for another 41 rinses then” said the mechanic. That filled me full of foreboding because that was going to work out to be extremely expensive and I wasn’t sure whether I could afford the cost of the repairs.

It was nevertheless a struggle to leave the bed and when I did finally make it to the living room, mine host was already there preparing breakfast.

I waited quite a while for my tablets to work and then I joined my housemates for breakfast. And this is the first place on my travels where I have ever been offered soya milk. Apparently mine host’s wife drinks it. 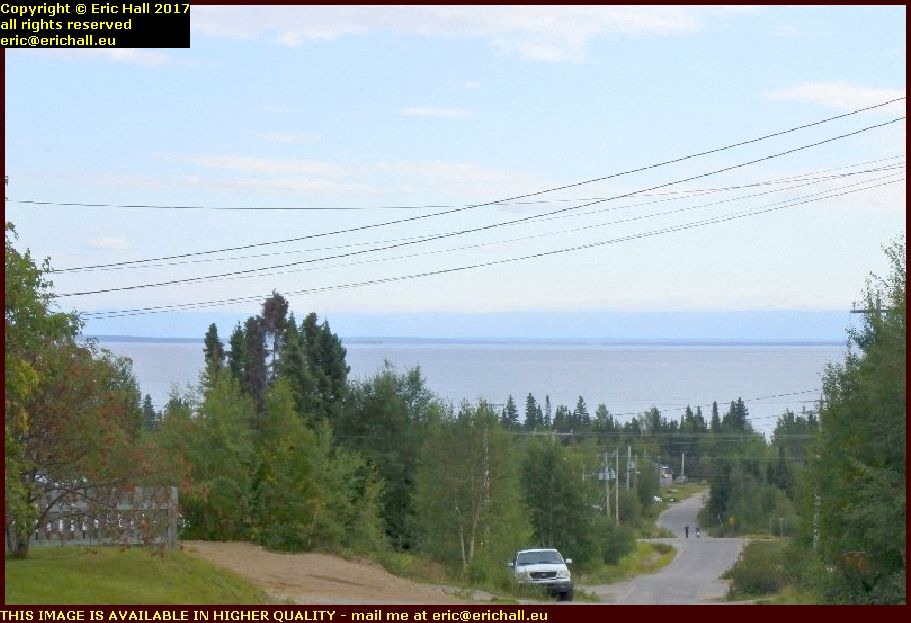 Once I’d gathered my wits about me, Strider and I set out for North West River to see what had happened to the guy whom I was supposed to meet.

At the Labrador Interpretation Centre, I met the lady who had been so nice to me two years ago. To my surprise, she remembered me.

And as for my contact, he’s “gone to his cabin until Friday”.

However, as a stroke of luck, she reckoned that she might know the person to whom my contact was intending to introduce me.

And the reason why it should have been yesterday was because today, he was going … exactly to where I wanted to go.

But she took my number and promised that she would have him telephone me as soon as he returned. 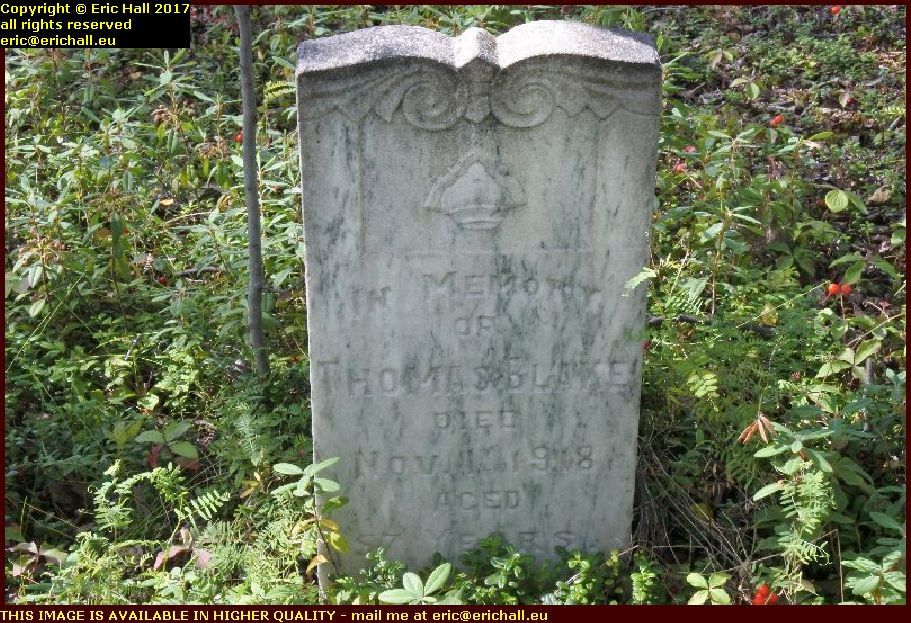 There are three cemeteries in North West River.

The influenza victims are said to be in the earliest one, but all that I could find was this headstone of Thomas Blake, aged 59, died in November 1918.

It’s hard to say what the day is, but if it’s the 12th, that might well tie in with what we know. The Sagoma with its infected crew arrived in Cartwright on 20th October and the infected Harmony arrived at Okak on 4th November. 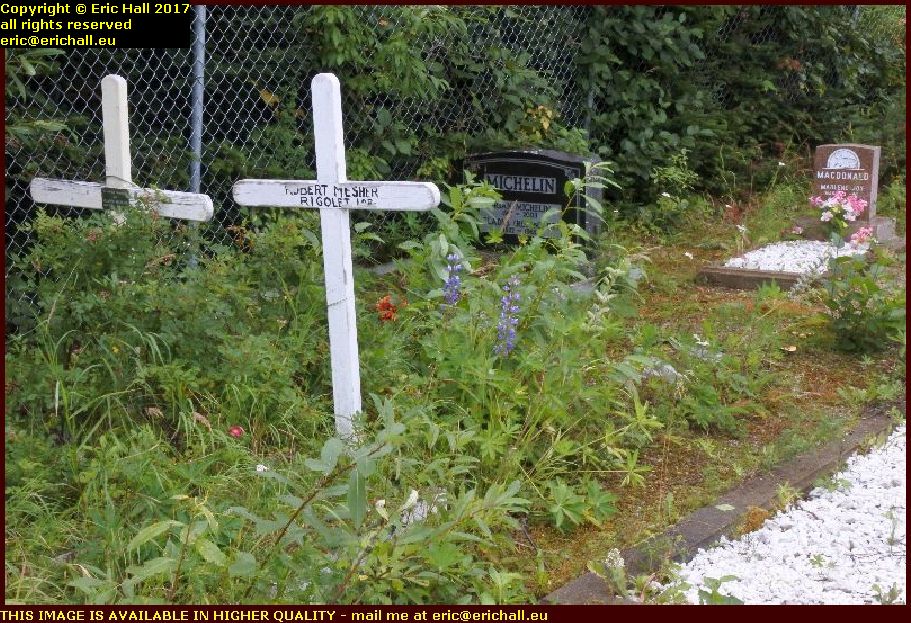 But in the cemeteries, all of the old original “trapper” families of Hamilton Inlet are represented.

Here in this photograph, we have, for example, a couple of Meshers from Rigolet, a Michelin and a MacDonald.

The origins of the “Michelin” name are unclear. But there was a French trading post here on the south side of the river where Sheshatshiu stands today, and it might be connected with that. 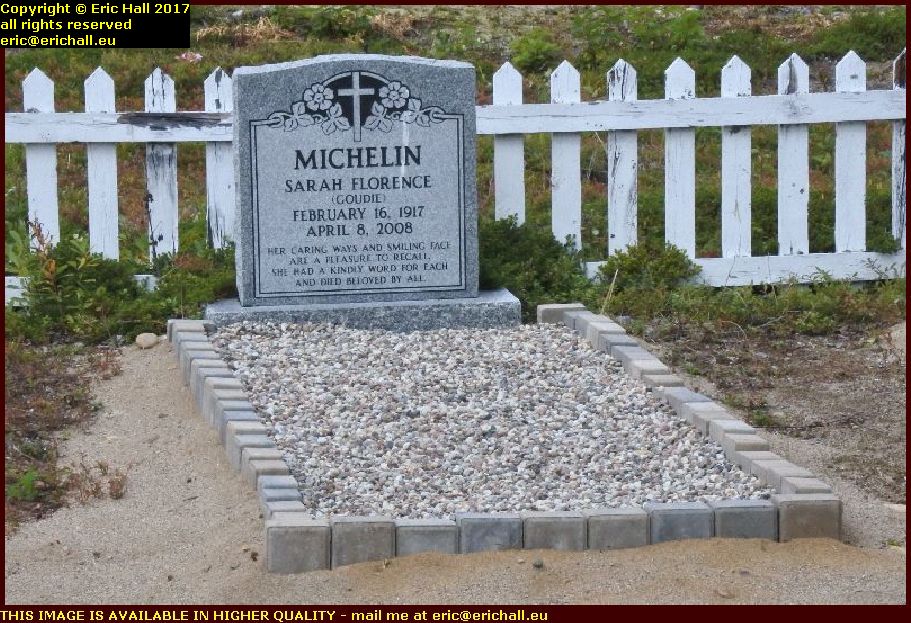 Plenty of Blakes and Baikies as you might expect, and also dozens of Goudies.

This is the grave of Sarah Michelin, née Goudie and her name certainly rings a bell, although I can’t think for the life of me why.

In fact, everyone who is anyone is here – except of course for Gilbert Blake, even though he will for ever be associated with North West River. 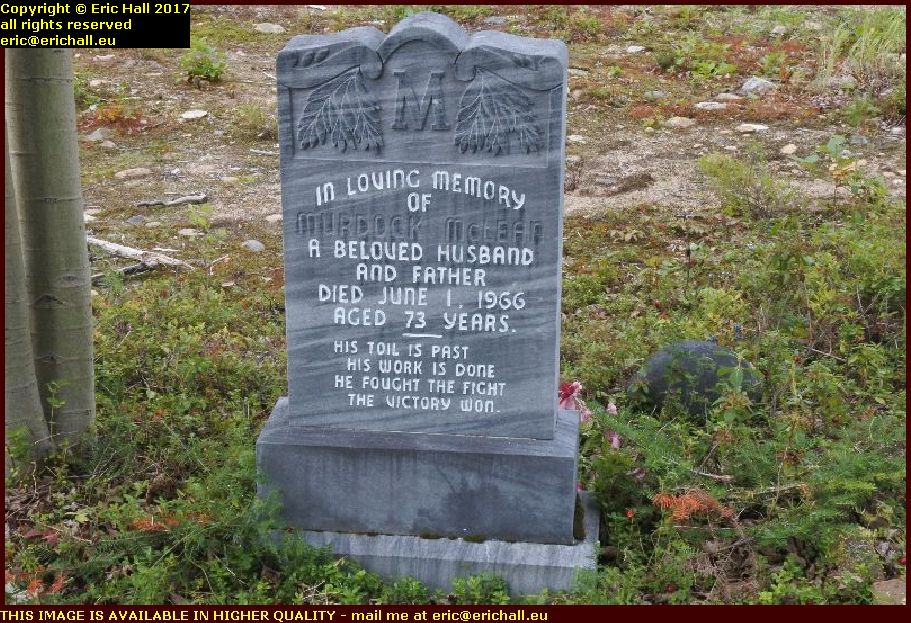 Now I know that I shouldn’t smile about events in e cemetery, but sometimes it’s just not possible to stop.

Murdoch McLean, a beloved husband and father is buried here. And it reminds me of the American visiting the cemetery in Arbroath.

“Here Lies Jock McTavish, a loyal husband and devoted father”
“Now isn’t that ust like the Scots? Burying three men in one grave?” 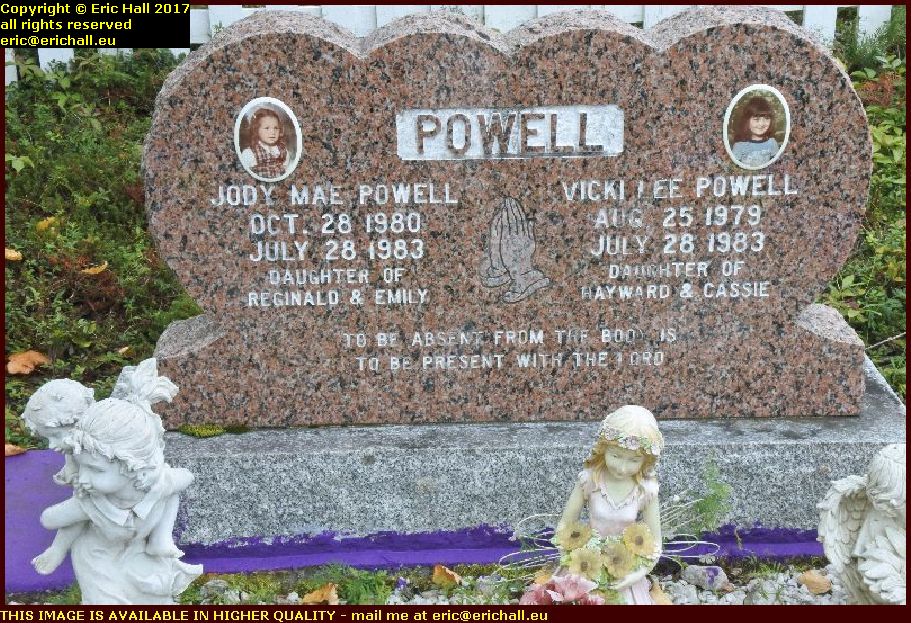 But this next grave is enough to wipe the smile off anyone’s face.

That’s the kind of tragedy that always seems to befall isolated communities like this. And the cemetery was full of the graves of small children. 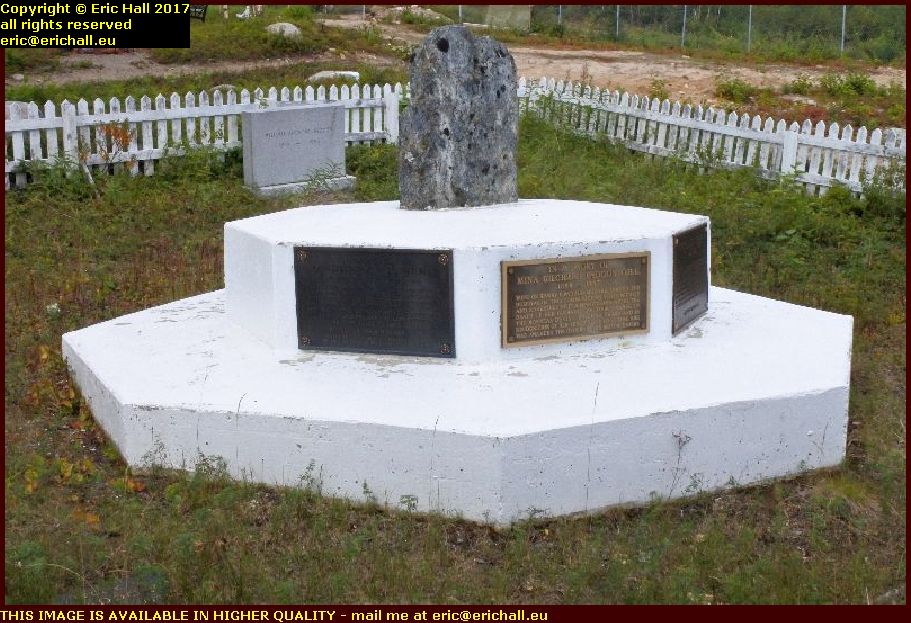 This is the “Paddon memorial” in North West River.

Labrador was a British colony – not part of Canada – until 1949 but was treated even worse than Africa, with no infrastructure and no medical service.

It was a charitable organisation – the International Grenfell Organisation – that provided medical services here. And then only from the early years of the 20th Century.

It was Dr Harry Paddon and his wife – and later their son William – who came here from the IGA to deal with the health issues of the “liveyers” and the Innu and Inuit communities.

They are still fondly remembered in the community, despite Harry having on one famous occasion blotted his record by describing some trappers as “backyard bunny hunters” 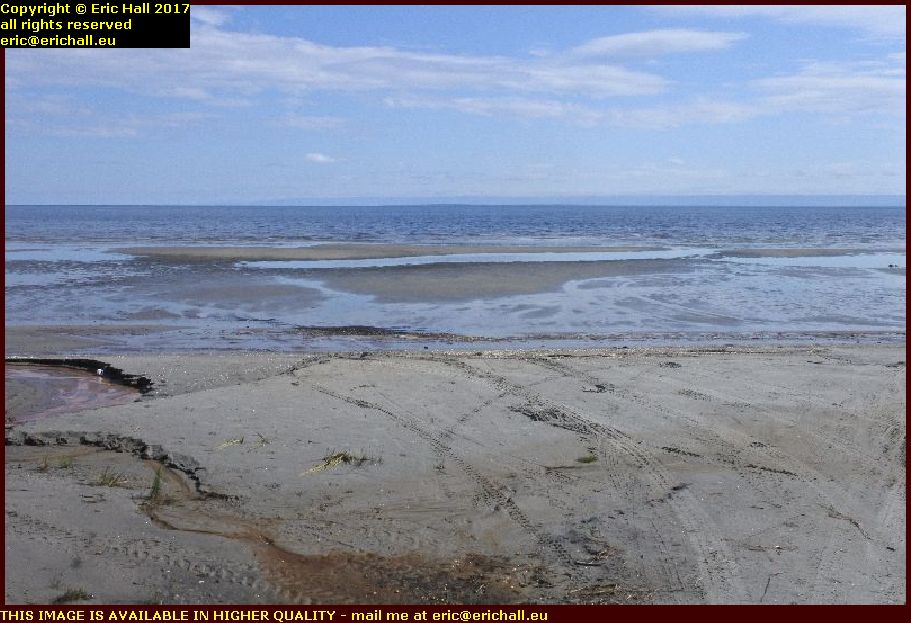 Having done the tour of the cemeteries I went down to the beach.

The beach here in North West River is quite famous, being one of the nicest accessible beaches in this part of Canada.

But I would be very wary about bringing your bikini or your cozzy here because it’s not exactly sun-bathing weather and the water is freezing. 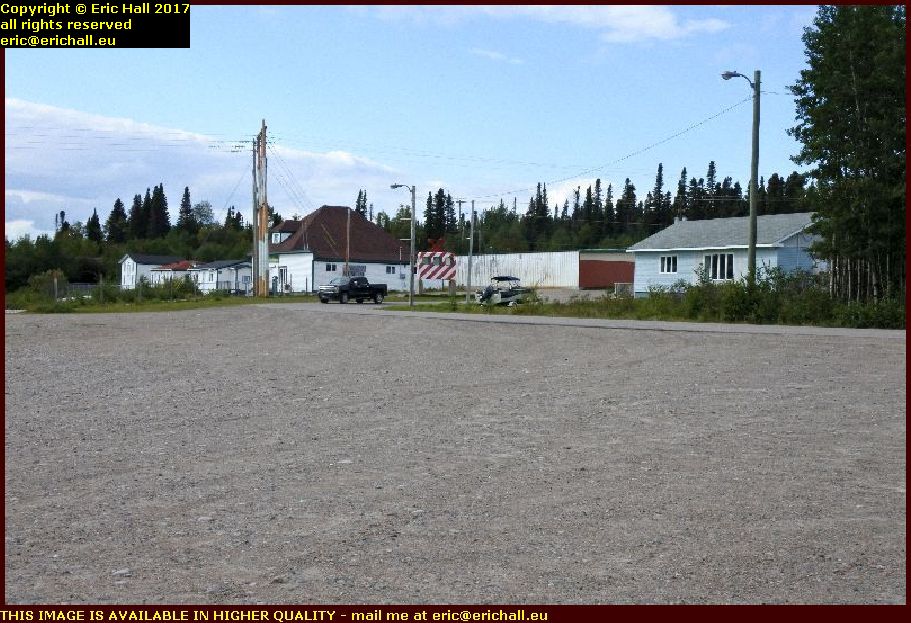 For lunch I went to sit on the dockside to look at the river.

But there’s also what was the Hudsons Bay Company offices over there, and also the North West River terminal of the chairlift.

The bridge here is of comparatively recent construction. Prior to that we had the chairlift, and prior to that it was either kayak, canoe or ice skates.

Having had a little … errr … relax, I decided to go for a stroll in the warm sun. 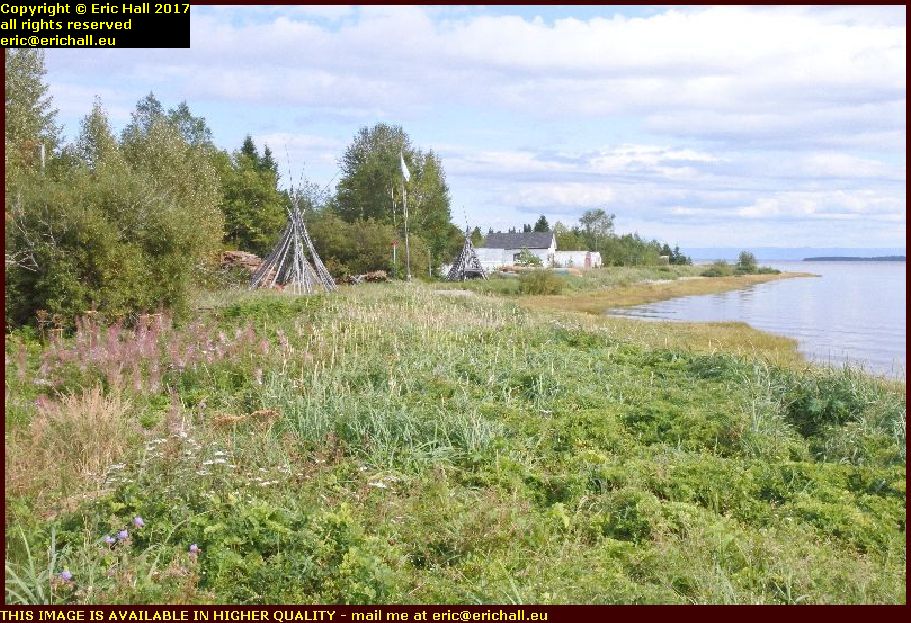 While I was walking along the boardwalk towards the tipi, I finally had my telephone call.

The person for whom I was looking was now back from up-country and I told him what I was hoping to do.

This led to quite a lengthy discussion and we worked out a cunning plan for tomorrow. I need to be back here for 09:00 and that means yet another night in Happy Valley-Goose Bay. 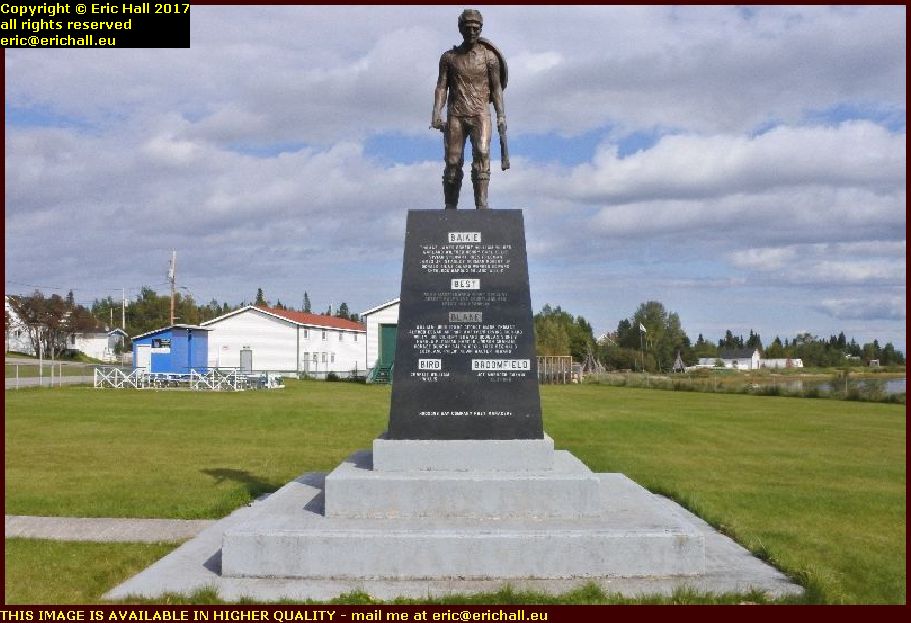 The highlight of North West River is the Trappers’ memorial. The whole raison d’etre of the town was as a centre for the trappers.

The Hudsons Bay company had a store here where trappers would trade their pelts for supplies.

And if you were in dispute with the Hudsons Bay Company, as many people were, the French company Revillon Frères had a rival post on the opposite bank of the river. 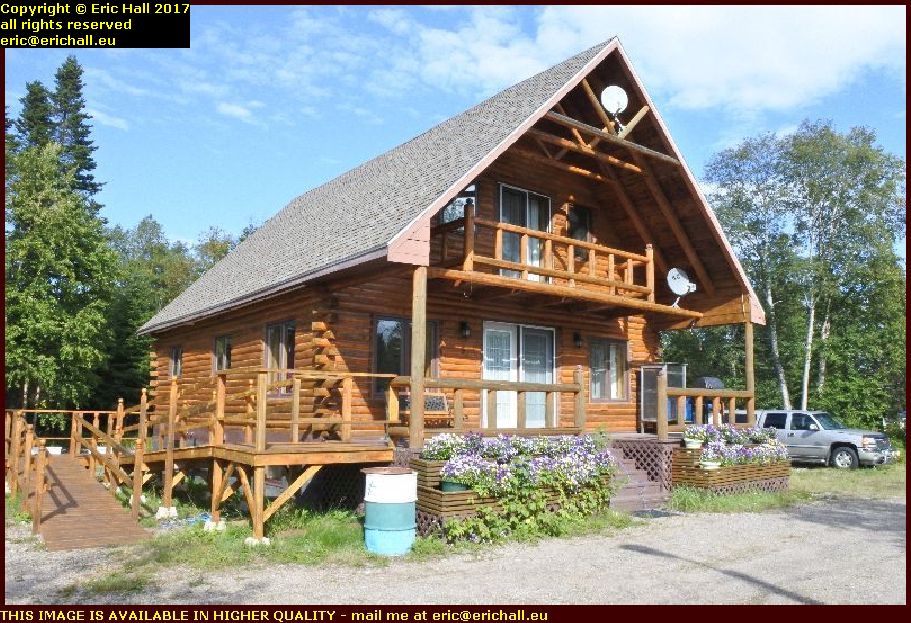 Now, isn’t this the right kind of place to live?

In my opinion it’s the most beautiful place in the whole of North West River in which to live.

Believe it or not, it’s not all that old. It was erected in 1995. And it’s not a kit home either, but constructed out of local materials by local craftsmen.

And they can construct something for me at any time they like. 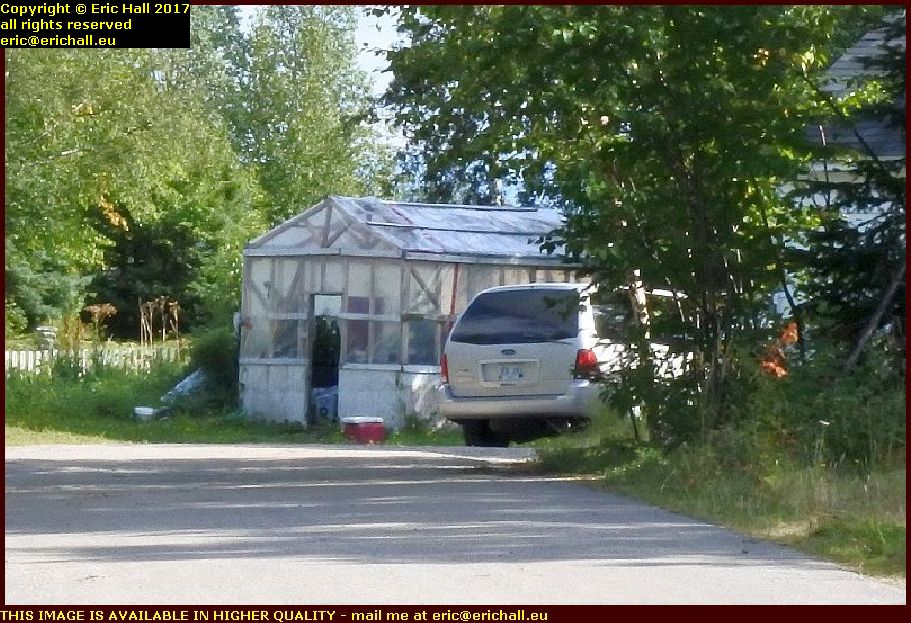 You’ll remember that yesterday we visited one of the very few farms here in Labrador. Today we’re having a crafty peek at someone’s greenhouse.

I’ve absolutely no idea what it is that he’s growing in there – there was no-one around to ask – but I certainly admire anyone who gives gardening a go around here.

Mind you, having said that, it was quite the thing around here when the Grenfell Association ran the show before Confederation in 1949.

One of the things that I wanted to do was to take a drive down to North West Point on the southern side of the river.

This was the site of an American radio post in the 1950s and is something of an environmental disaster because the US Military cared nothing about the territory of Labrador. 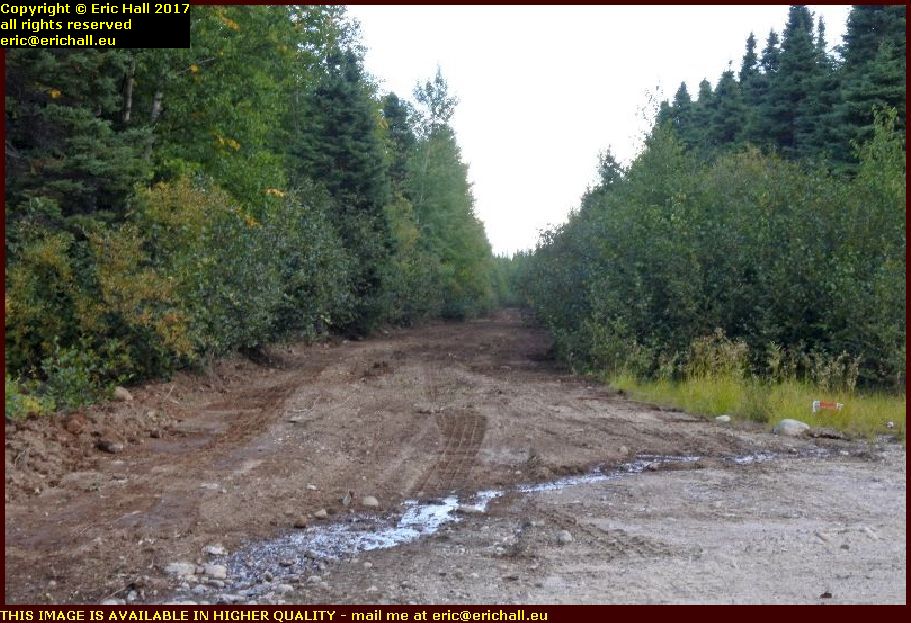 I’d done some research to find out where the access road might be, but unfortunately, it seems to have been all ploughed up and impassible.

I wasn’t going to risk taking Strider down there and these days, I’m not up to doing a hike of any distance in these kind of conditions.

It looks as if I shall have to forget this one. 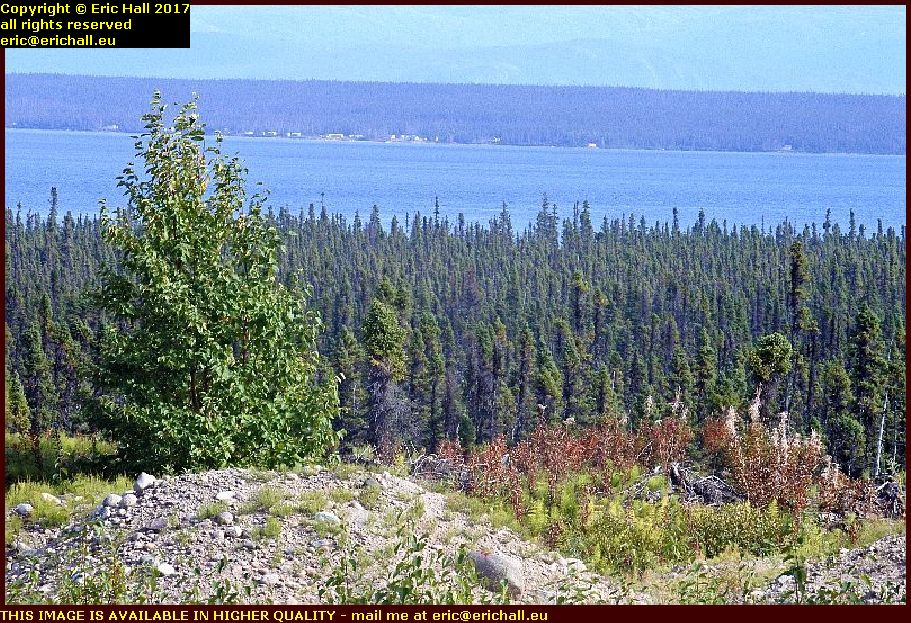 Instead, I continue down the gravel road, and I’m not disappointed by what I find.

I could show you 10 photos that I took from this spot but instead I’ll let you have a glimpse of just one – which I think might be of the docks and seaplane base down at Terrington Basin.

That’s where the ships come in, and where we saw the Fairlane the other day. 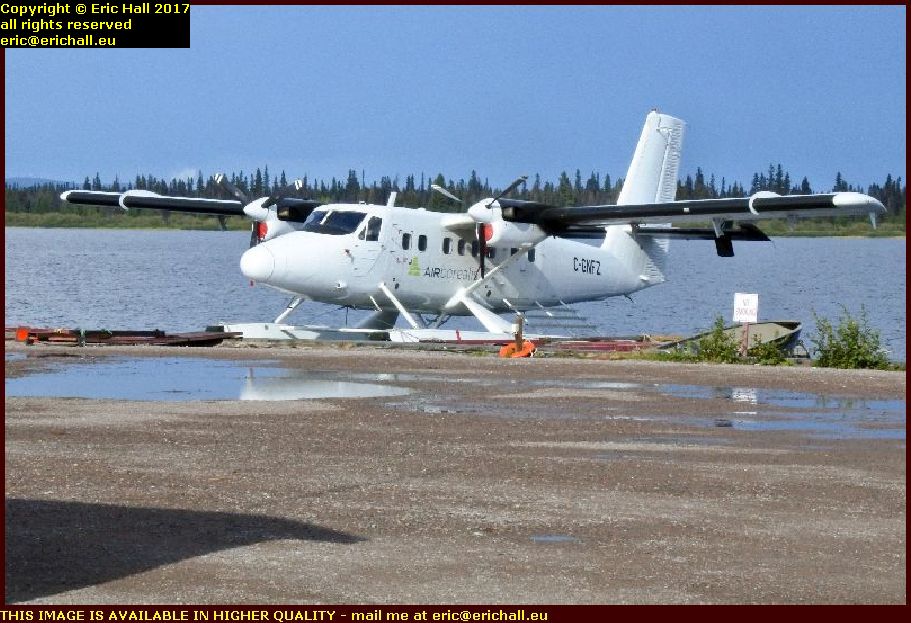 Talking of the seaplane base, which is at Otter Creek, we’re in luck yet again. Here on the slipway is Airborealis’ C-GNFZ.

She’s a De Havilland DHC6-300 – a type that is much better-known as the “Twin Otter” and is one of the more successful low-capacity commercial passenger planes, ideal for travel out here.

She was built in 1980 and as you can see, she’s still going strong.And, for a twin Otter, quite appropriately here at Otter Creek 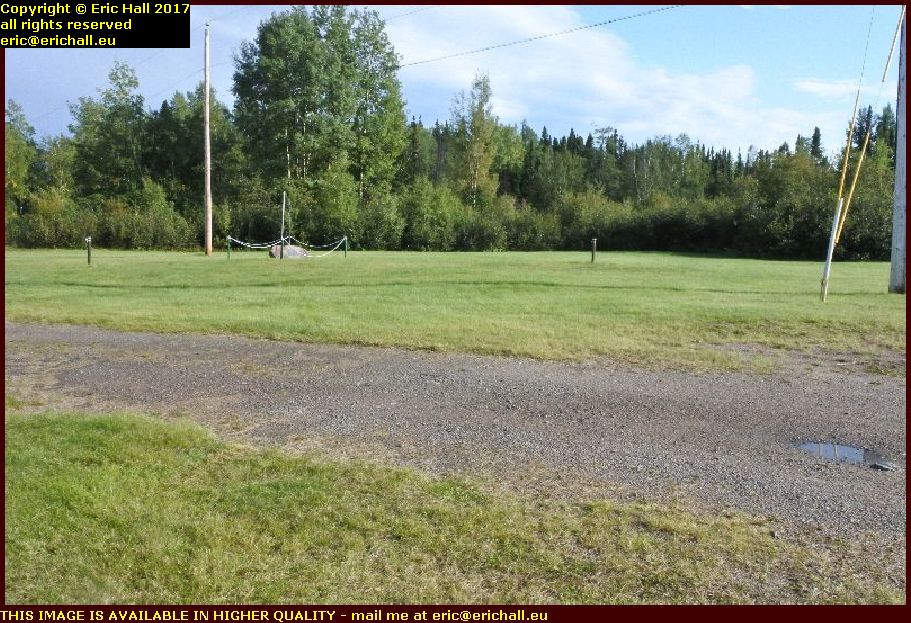 But an earlier claim to fame for Otter Creek took place here.

Prior to the air base there was very little here at Goose Bay. The people who came here to build the air base had nowhere to live and so set up a squatters’ camp here on this spot.

They were soon moved on by the US authorities, but it’s here that it all started. 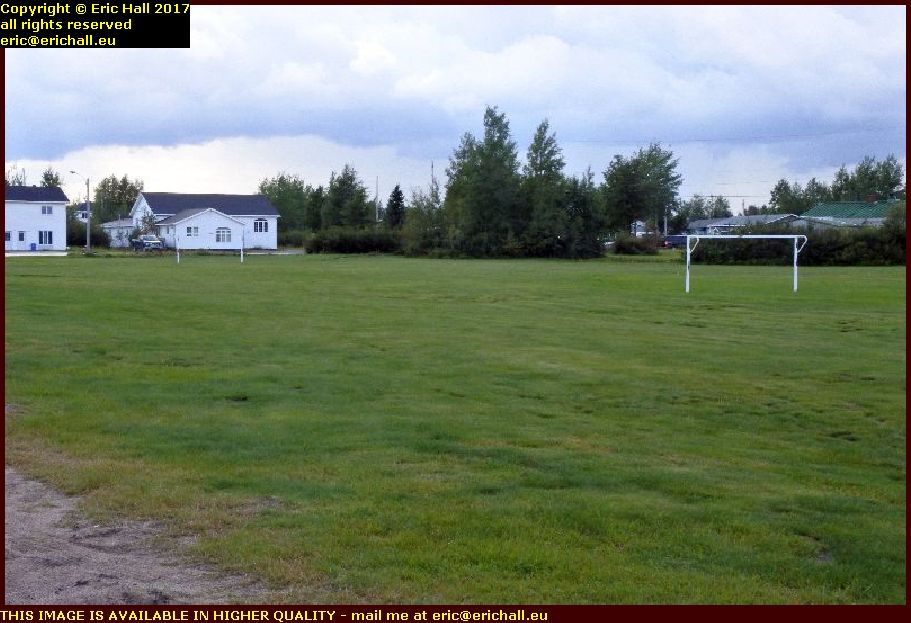 And here’s a thing!

Regular readers of this rubbish will recall that we have more than a passing interest in football grounds. And here is probably one of the most unlikely football grounds that you will ever encounter.

And, more to the point, who does the team play against? I can’t imagine that there’s much in the way of opposition around here.

And from here, I had my encounter in the cemetery.

Back here, I had more baked beans, baked potatoes and vegan sausages and yet another early night.

And it’s not as if I’ve done very much either.