This afternoon we signed the compromis for these houses in Montaigut. Mind you, it’s not all plain sailing as you might imagine with anything involving me. Firstly the houses are situated in a historic area (in fact,just round the corner is the blacksmith’s where Joan of Arc had her spurs made) and so the town has the right to match any offer made on any property in that area. Mind you the town is flat broke so that’s unlikely to happen but I bet they’ll soon find the money if they get to hear that there might be a possibility that I might be moving in there.

Secondly the properties have already been sold elsewhere. However the guy can’t get a loan (and looking at them, it’s no surprise) and so he has renounced his offer, but nevertheless he needs to give his formal agreement.

Nothing is ever straightforward, is it?

Completion is set to be the end of April so the major plan currently is
1) finish Terry and Liz’s kitchen on rainy days
2) point the outside wall of their house on dry days
3) change my barn roof
4) go to Brussels and have a blitz on my apartment in Jette and put it on the market.
5) come back and start on these houses

So that’s the plan for the next three months anyway. You can see what I mean about being busy. 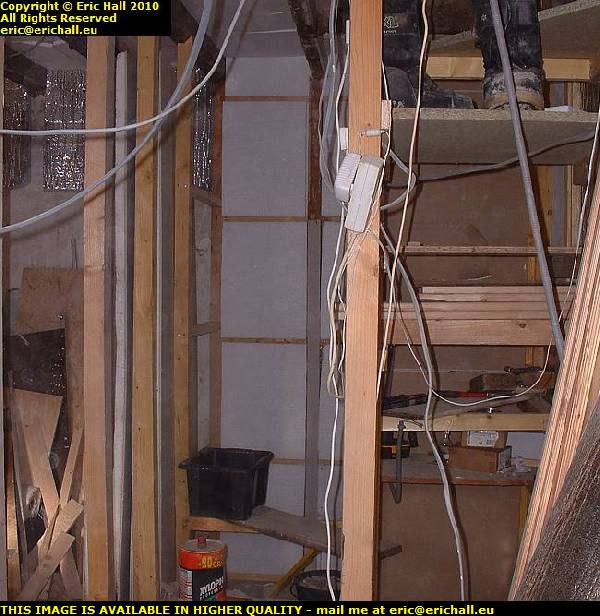 Talking of being busy though, I’ve finished insulating this cupboard space, put the horizontals in and now I’ve started to plasterboard it. It won’t take at all long to finish now and when I’ve done that I can put some shelves in there to store anything that needs to be kept clean and tidy.

And whule we are on the subject, Terry and I have been discussing my lighting. Terry is refusing to get involved in my electricity ( well, he is an electrician and he does have his professional pride) and he is quite impressed with these 12-volt LEDs that I’m using (and they had a few more on sale in LIDL today). So much so that he agrees with me that a mains (230-volt) lighting circuit is pretty redundant. So what am I now going to do with all these light bulbs that I’ve been collecting? But I’m not all that bothered. It’s saved me a lot of work and it is rather unnecessary.

And who was Joan of Arc? Why of course, she was the wife of Noah.