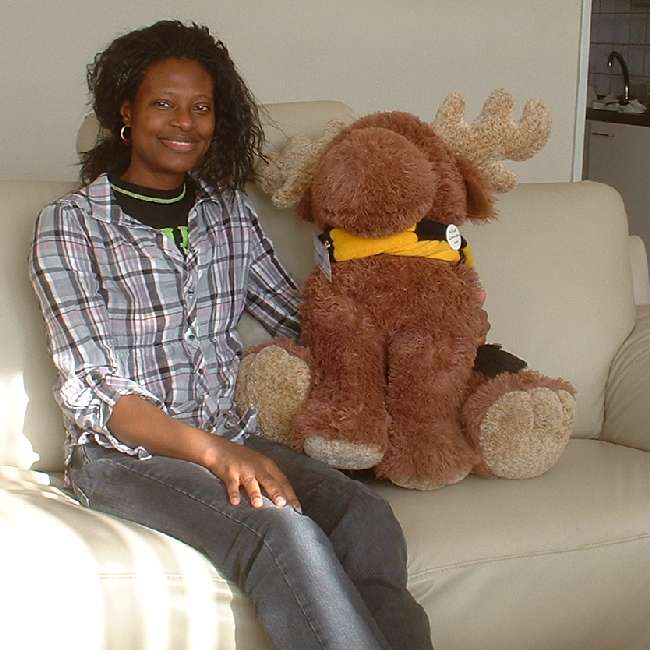 Strawberry Moose got to see his Auntie Tracy this evening. In fact it’s been quite some time since the two of them met – probably two years or so.

As predicted, cleaning this apartment is pretty hard work particularly when your heart isn’t in it. But at least I’ve cleared away the forest of dead plants inside the apartment, made a start on the ones on the terrace, and I began some desultory cleaning.

But then of course the rest is history.

It didn’t take me long to get discouraged so I rang up Tracy in Antwerpen to see if she fancied coming down for a coffee, but she wasn’t feeling too well and so, any excuse to stop cleaning and tidying, I went up there.

We had a good chat, mostly about what’s been happening to us since we both graduated from the Open University, and then went out for a meal. And if there’s one type of cooking that will run a good Indian close then it has to be Middle Eastern cooking and as luck would have it there is an Egyptian restaurant not too far from where she lives whose falafel and hummus is second to none. And of course there has to be a big plate of fritjes to go with it. After all, this is Belgium and they invented the French Fry. There is of course all of the old jokes about this –
“Why are there no Belgian astronauts?”
“Because there are no fritkots on the moon”
“What do you call a German living in Belgium?”
“Fritz”
“Why are there potatoes in Belgium and oil in the Middle East?”
“Because the Belgians had first choice”
Yes, we know them all.

But I like Antwerpen – it’s got much more going for it than Brussels. And had my work not have been so “irregular” I would have gladly bought a place here. In fact there is a suburb of Antwerpen specially named for me – it’s called Weerde. I would have been very happy there, almost as happy as living in that Belgian town between Enghein and Ath.