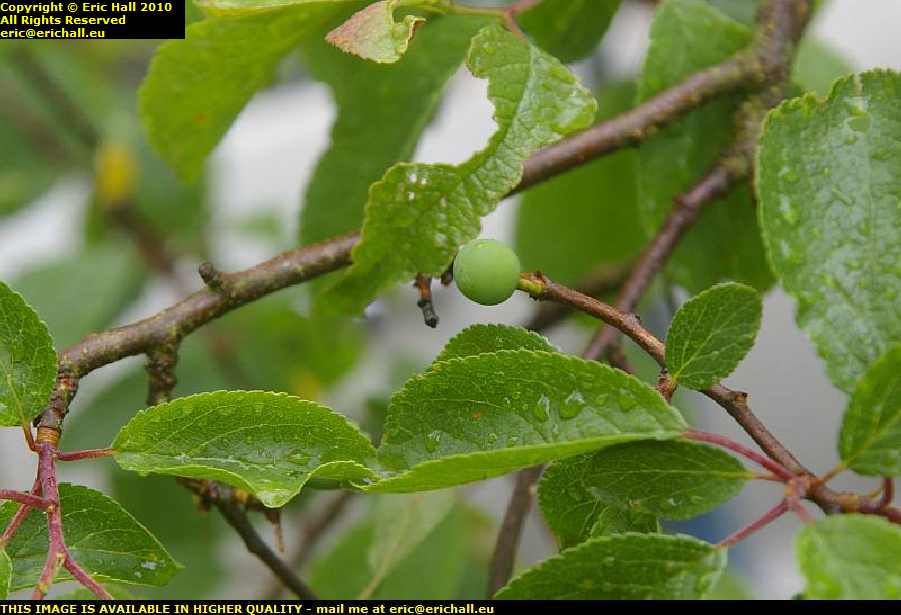 … that the other day I posted a photo of this tree that was slowly lowering itself down onto the vegetable plots in my garden under the weight of all of the foliage that it was producing.

I’ve had a good look around on the internet to see if I can identify the tree and its fruit, but I’ve not had very much luck at all. I would be grateful if anyone could identify it for me.

I reckon that this might well be your department, Krys.

I’ve was out all morning. Nada, the Croat sculptress who lives in Biollet near the Buddhist temple was at the chantier on Saturday and she said she needed to see me. And so I went today. She’s had some work done on her house but there’s a lot more to be done during the months of July and August and she was looking for advice, help, and the name and address of a decent craftsman. This kind of thing is right up Terry’s alley so I duly gave her his phone number and made her well-aware of his hourly rate.

We also had a lengthy chat about downsizing and composting toilets. I’m amazed at the thing in which people consider me to be an expert these days. But not composting toilets of course. After all, people have been saying that I have been talking crap for years.

Nada cooked lunch for us and then I came back here. But not to work outside or to take photos because it was absolutely p155ing down outside. Instead I started to design my publicity leaflet for my business. I need to get a move on with that and earn some dosh – especially as my gravel is coming tomorrow.

The gravel is coming, but the guy with the tractopelle isn’t, so I understand. There’s been a death in their family and that has kyboshed that!

And in other news, this latest Zionist atrocity has reverberated around the world. Krys quite rightly said that what would Notonyournelli have said if the Zionists had been on the receiving end of this. But more to the point, what would the western world have said if the Iranians or the North Koreans had done a similar thing?