… Sleep of the Dead last night. Totally painless it was too. And I was off on my travels. I had taken a job a a tram driver and after being trained, I took to the rails. On my first journey I couldn’t pull in at a tram stop as there was a lorry parked in the way so I had to go past and reverse back in (yes, on rails, this was!). But in reversing in, I switched the points and so on setting off again I was going down the wrong road. I couldn’t reverse back either because by now another tram had pulled up behind me. And so I’d somehow managed to bring the whole city’s tram network to a grinding halt.

Breakfast was quite quiet – just two of us there – and then I came back to finish off some work before hitting the road. But I had the wanderlust and so I didn’t hang around long. I was soon on my way. 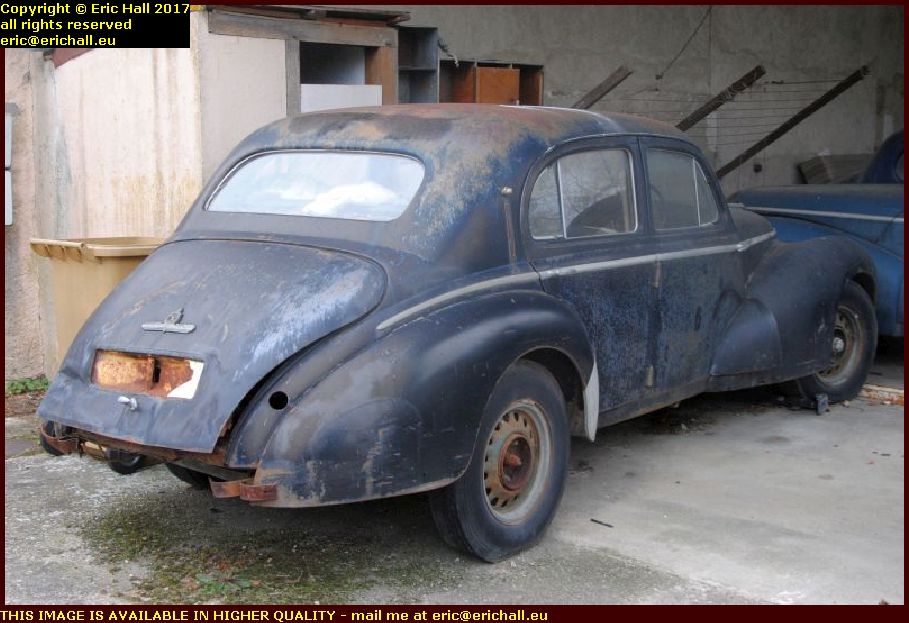 Mind you, I didn’t manage to travel very far at first. As I was driving past some kind of farm-place, I noticed the rear end of an old car poking out from under a lean-to.

At first glance I thought that it might have been a Morris Oxford MO – the “Big Minor” of the late 1940s and early 1950s of which my father had two when we were kids – KKB547 and LDM819. It’s only natural therefore that I pulled up to make further enquiries. 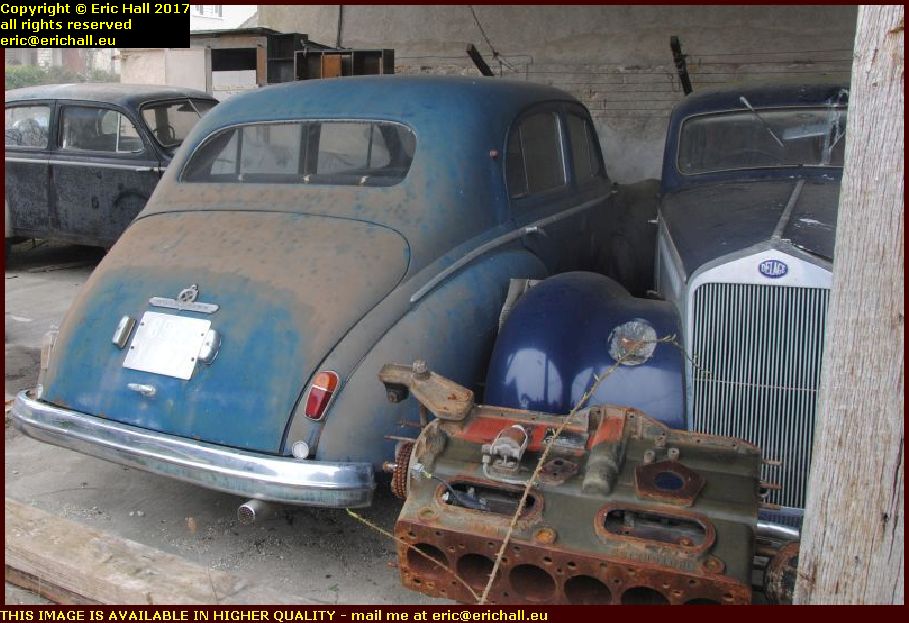 First thing that I noticed was that it was not a Morris Oxford MO at all but a fairly-similar-looking Hotchkiss saloon of a similar period. And that was something that quite amazed me because I’d never seen one of these before.

Secondly, it wasn’t alone either. There was a second one here too. In a much-more-complete condition. And both of these vehicles had quite a considerable amount of company. 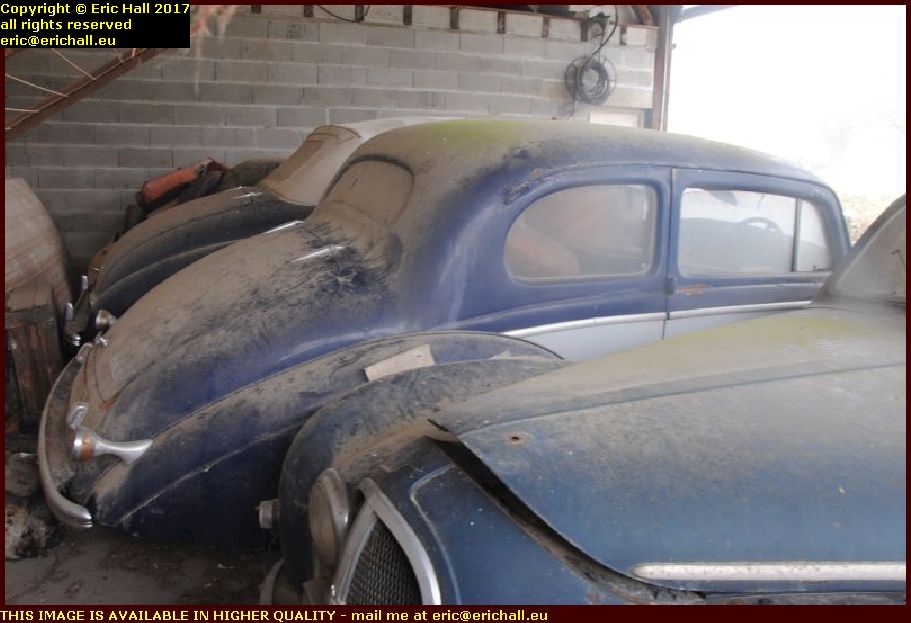 There was a sign on the premises – “Private Property – Visits Tolerated Under Supervision Of An Occupant Of The Premises” – and you’ve no idea how long it took me to actually find someone who looked as if he belonged to the site.

Just as I was giving up all hope, a young guy turned up in an old (as in 1990s) Citroen. We had a little chat and eventually he gave me the necessary authority to go for a wander around with the Nikon D5000 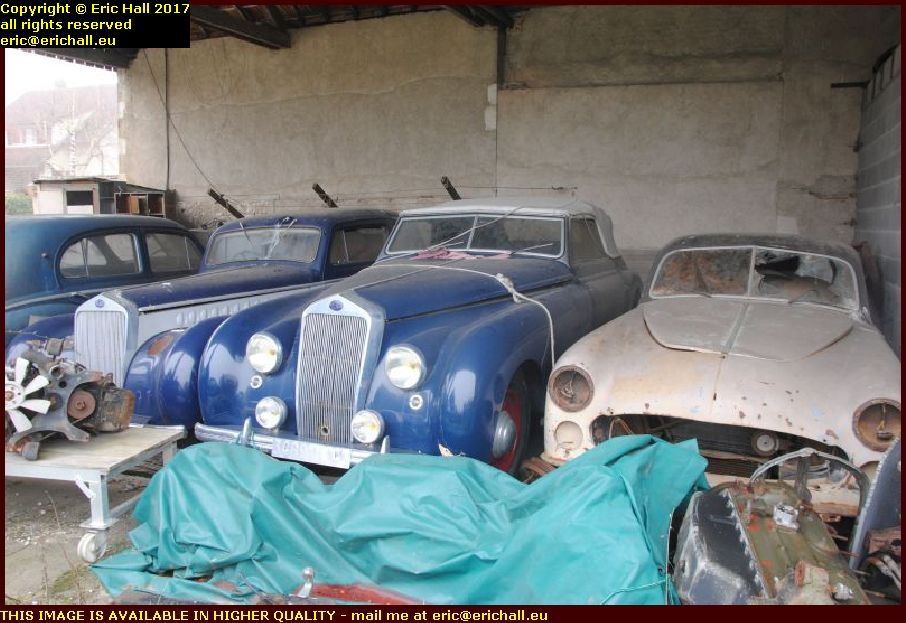 And this is what I found underneath the lean-to in total. An absolute treasure-trove of vehicles.

We have of course the blue Hotchkiss on the extreme left of the photo. That’s exciting enough, and I have no idea what the beige car might be on the right – and there was no-one around to ask. But as for the other two, these are Delages and I would take the big one – which I think might be an S6 – home with me in a heartbeat. It’s gorgeous. 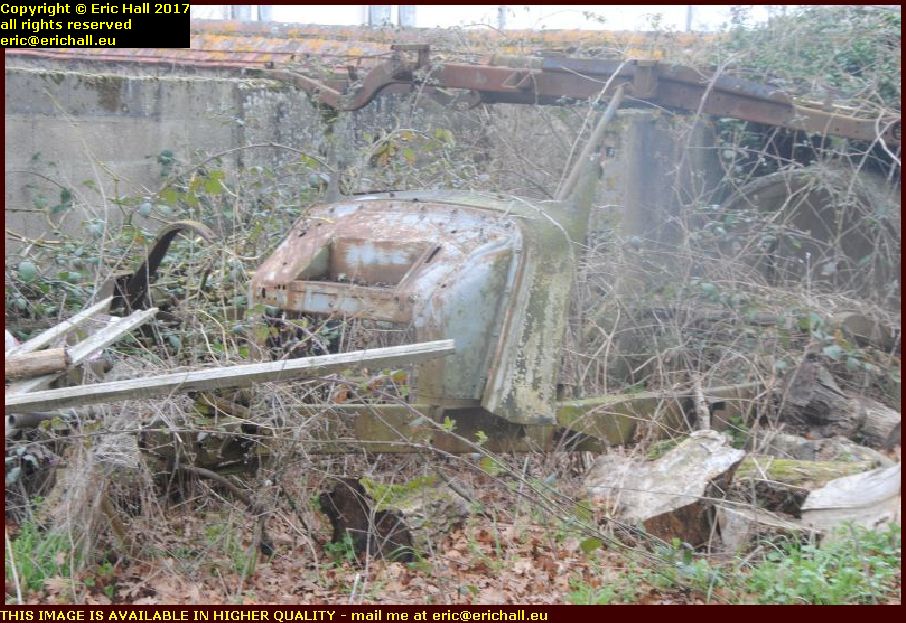 But then of course, that’s not all by any means because the place was littered with all kinds of stuff. Stuff that the owner thinks may be of less value but which for someone like me, are absolutely magnificent machines.

This is a chassis and bulkhead of something and I’ve no idea what it might be, or have been. But it’s not the kind of thing that I would leave lying around like this. 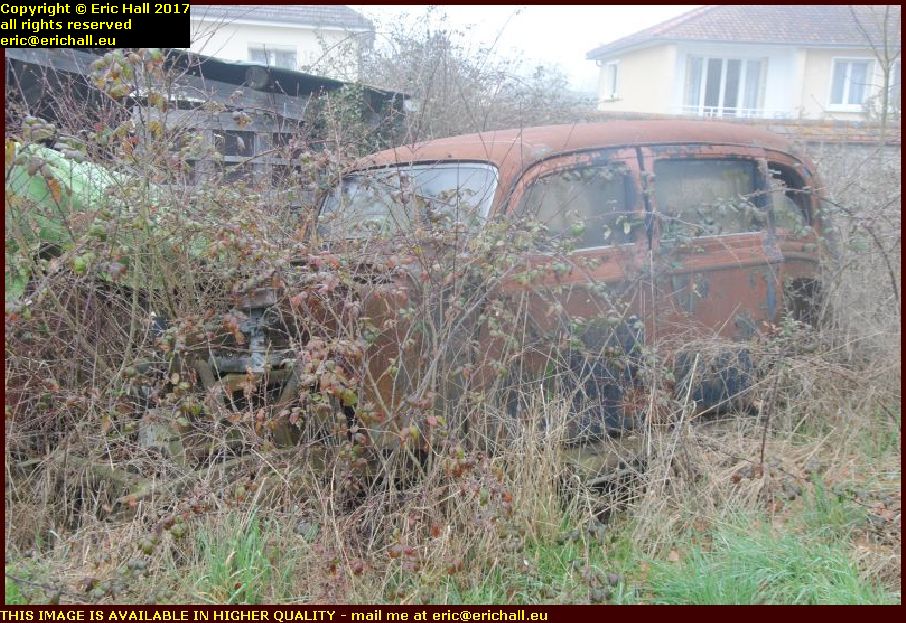 And that’s not the worst of it either. Because there are tons more stuff just lying around littering the yard.

This looks as if it dates to the 1930s and according to what I could make out, it might be a Talbot or maybe an ancient Hotchkiss. But that’s a sheer guess on my part because I couldn’t find any indication at all as to what it might have been. 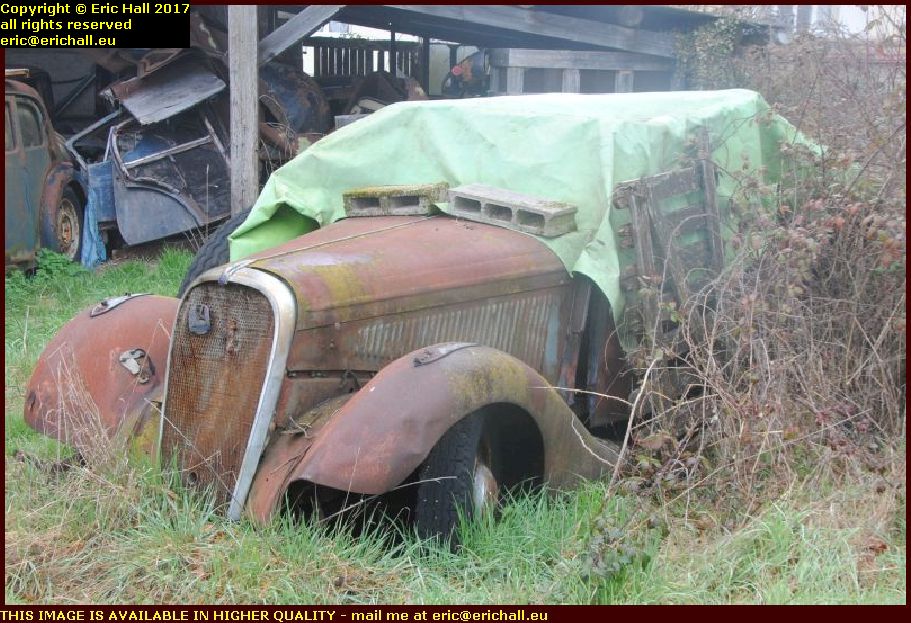 As for this vehicle, it looks as if it’s even earlier. At least it has had a tarpaulin thrown over it to save it from the weather.

Again, I don’t have very much idea of what it might be – it’s certainly something that I don’t recall ever having seen before. It’s possibly a Hotchkiss but then again, what would I know about it? 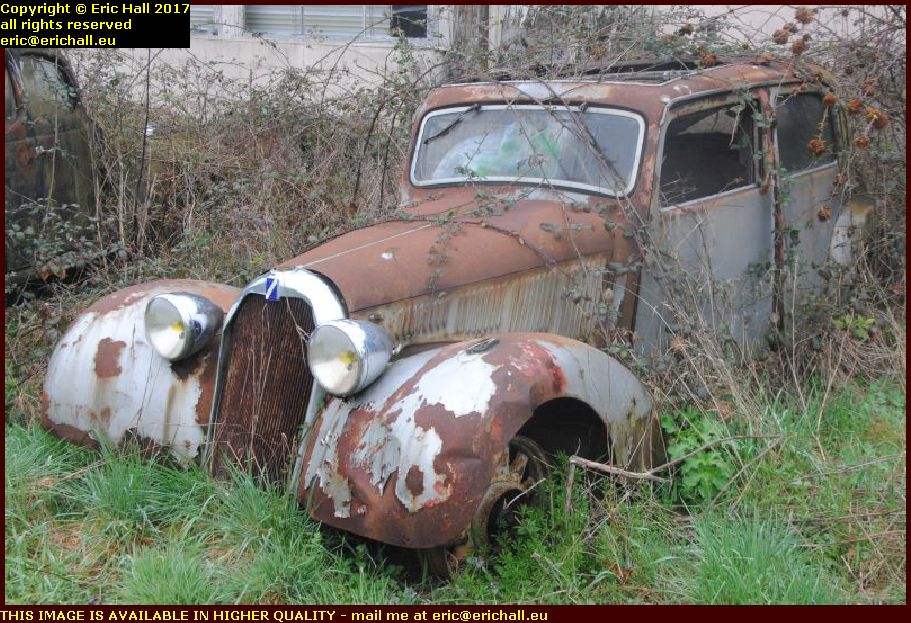 This car is much easier to identify because there’s quite a prominent bonnet badge on the radiator.

It’s a very sad-looking Talbot, from the days when Talbot knew how to make cars rather than assemble knock-down Chrysler rubbish. It still has some of its paint and with a good little bit of elbow grease and plenty of time, someone could actually make something out of this if they would only get a move on. 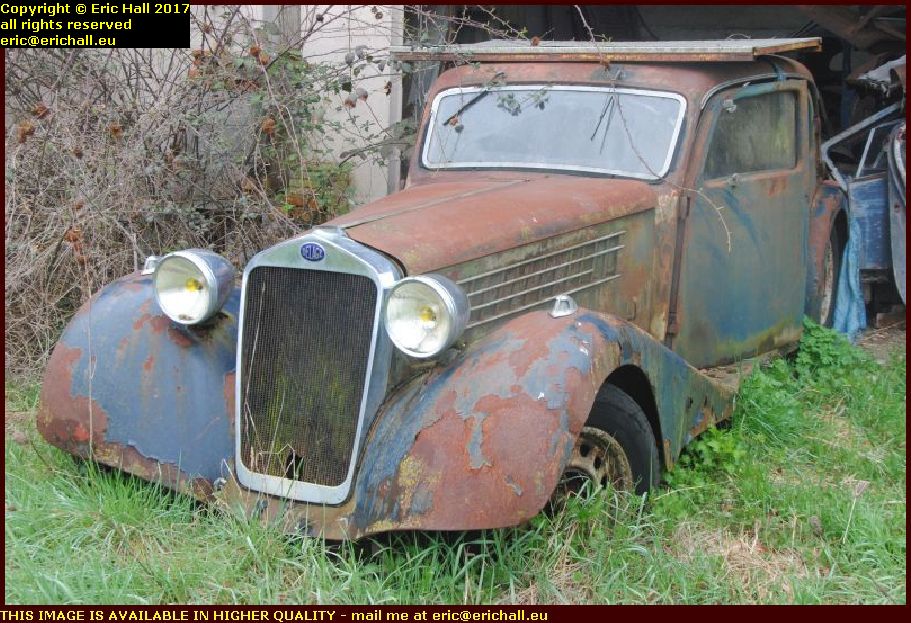 This is even much more like it and this ought to be dragged under cover out of the weather as soon as possible.

The radiator badge gives away the identity of this vehicle. It’s a Delage of course, probably from the early 1930s and this is another vehicle that would find ts way down to my barn in the Auvergne if I were in a position to do something about it. 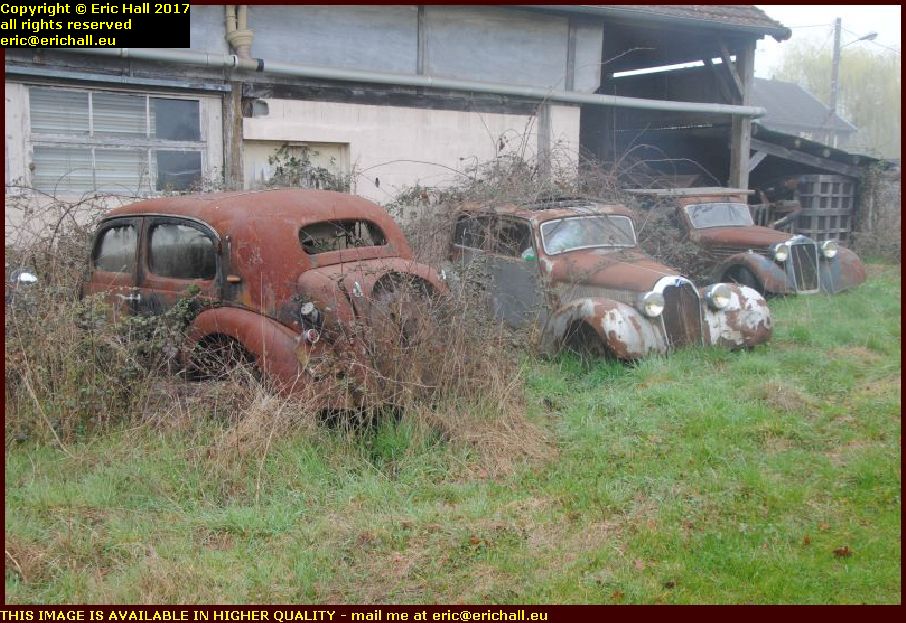 These three vehicles are extremely exciting too. We have the Delage in the far distance, and the vehicle in the centre of the photograph is the Talbot.

But the vehicle closest to the camera head-first against the outbuilding is, according to the casting on the engine, a Delahaye. Unfortunately, this is quite far gone and it would take a brave restorer of vehicles to have a good go at this. But it certainly deserves it. 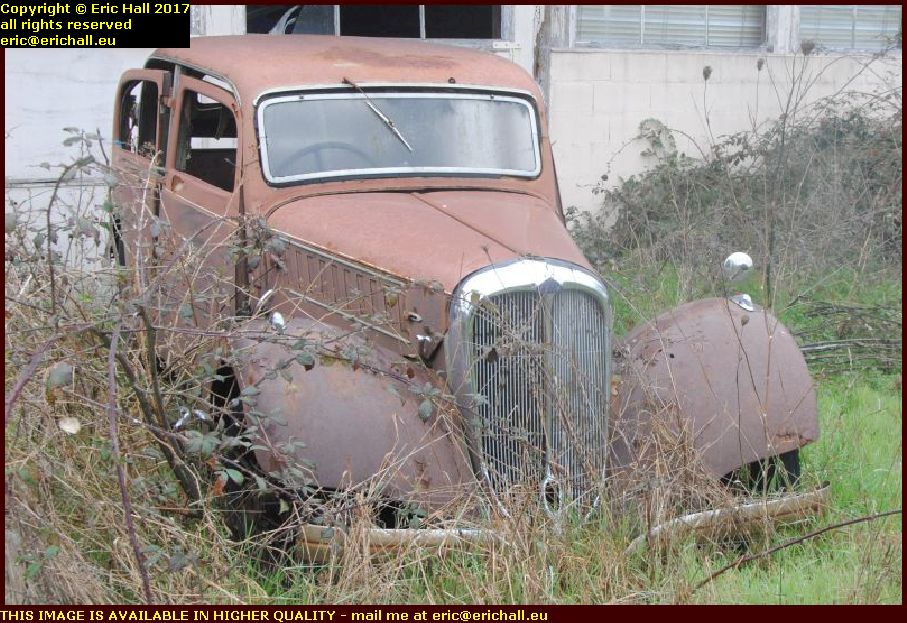 And this is perhaps the saddest vehicle of them all, I reckon. It’s a 1930s Delahaye which is comparatively complete, but yet seems to be too far gone for anyone to do very much with.

This is really a tragedy because while it might not have the class of the 1950s Delage that is underneath the lean-to that we saw earlier, it is just so nice and deserves so much better than this. 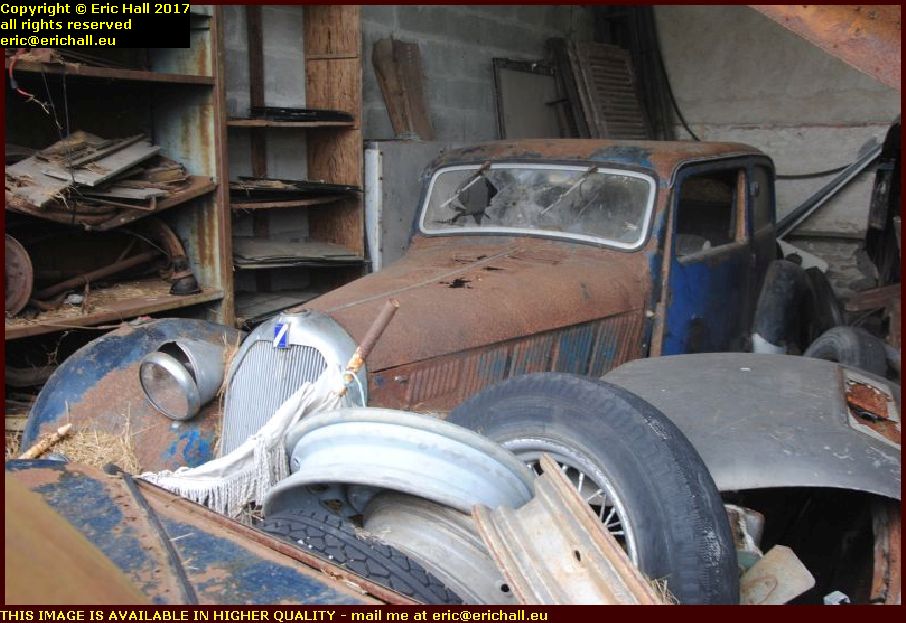 But it’s not all doom and gloom. The lean-tos and sheds are jam-pack full of bits and pieces and even old cars that it is absolutely impossible to access. I could have spent all day here.

Instead, I’ll poke the lens of the camera through the bits and pieces and show you what I mean. This is a Talbot and at a rough guess it’s from the late 1920s, and it’s under cover out of the weather. And for that I’m extremely grateful.

And if you have more luck or knowledge than I have in identifying these vehicles, let me know. All the information that you can let me have would be most gratefully received. 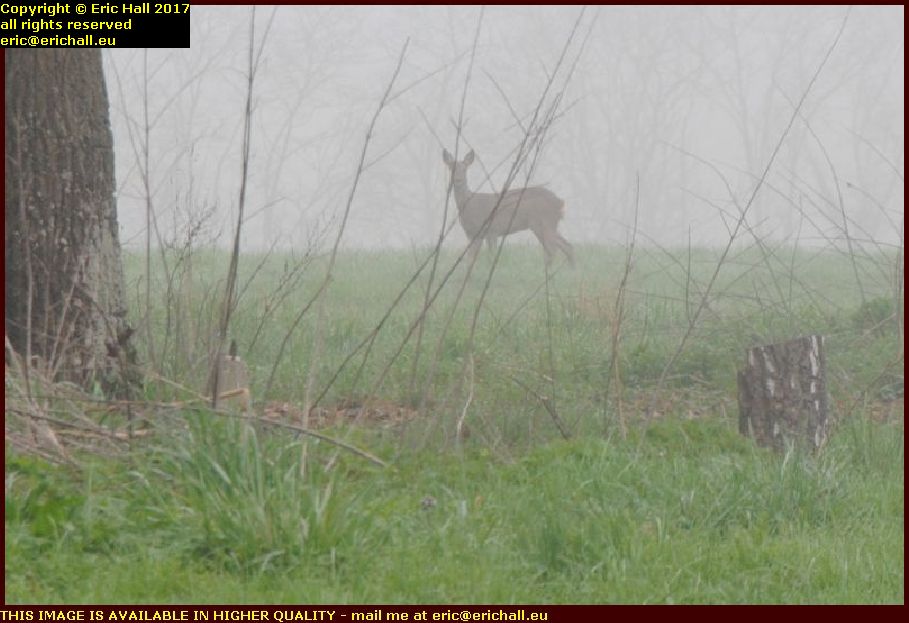 And I wasn’t alone while I was admiring these vehicles. This deer came to join me. Personally, I reckon that she must have been attracted by the presence of Strawberry Moose sitting in Caliburn outside – you never know.

Anyway I couldn’t hang around here all day, much as I would like to. I had things to do, places to go, people to see.

My journey took me along the side of the canal and the western banks of the River Loire until I headed off through the Foret de Troncais. 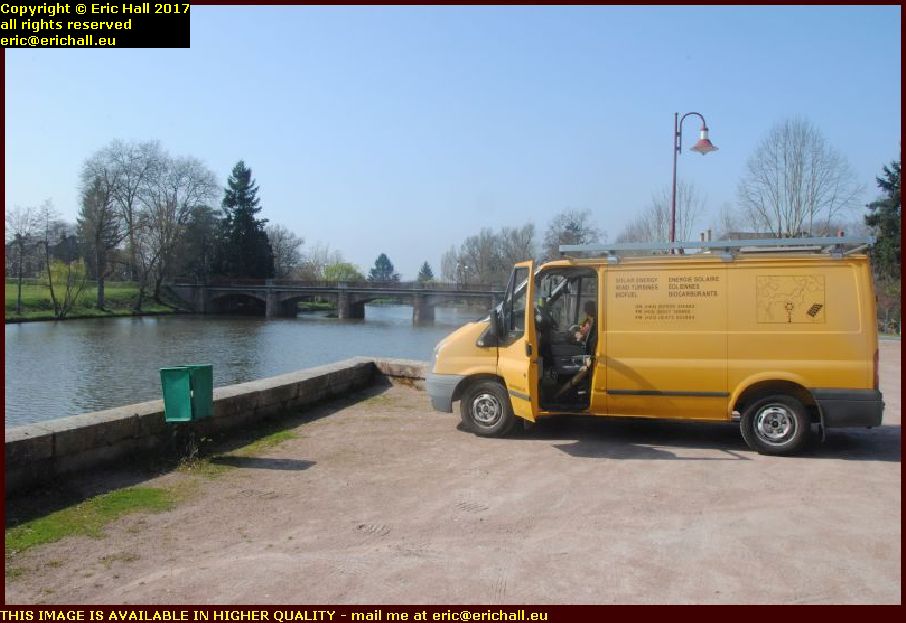 I stopped for an hour or so at Meaulne for a butty, to read a book and to tidy out a pile of rubbish from Caliburn. You’ve no idea how much rubbish has accumulated inside him since I hit the road for my appointment with destiny … gulp … 12 months ago

Back on the road I had yet more things to do and this involved a trip around a fewplaces in Montlucon. But it looks as if one of my projects is about to tomber à l’eau, for all kinds of reasons.

Now I’m in an IBIS Budget on the outskirts of Montlucon. I’m going to gather my wits and then head home tomorrow. First time for three months and I’m not looking forward to it, to be honest.