Monday today. everyone is back at work or back at University, and so it’s time for me to be moving on. I rescued Strawberry and prepared to enter the drag … errr … the Untied States.

And another 3-hour grilling too – it really annoyed me. It reminded me exactly of when I used to go to the Soviet Union – exactly the same grilling and exactly the same reason – “the interests of National Security”.

The USA spent 50 years trying to destroy Communism and then went to install exactly the same system of controlr there. I’m waiting for some high-powered American politician to admit that maybe the Soviets had a point. But I’m going to have to wait a long time. When was the last time that you met a frank and honest politician? 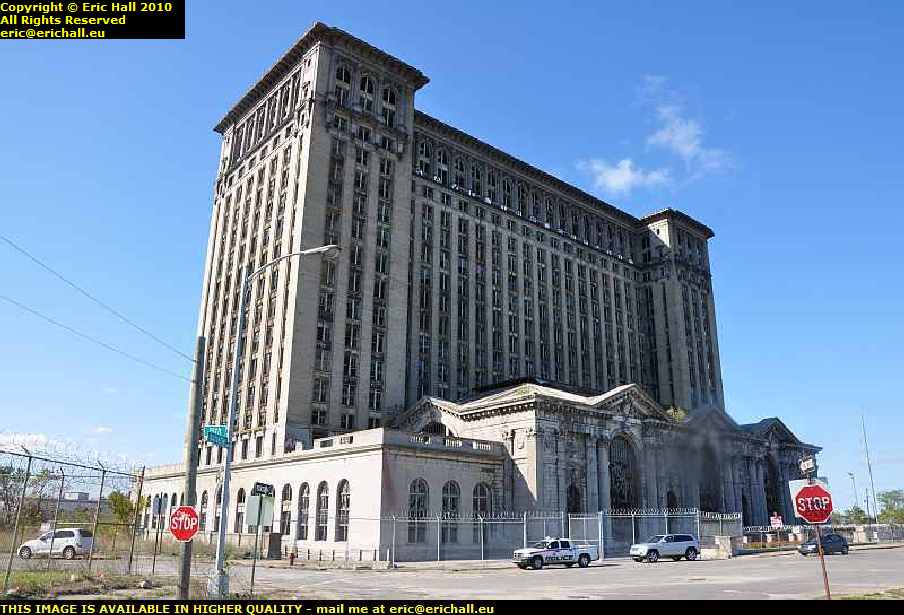 Firststop for any transport fan has to be the Michigan Central Railway Station in Detroit.

Built in 1913-14 a long way away from the city centre as a deliberate attempt to pull the development of the city down to that end, at its peak it handled over 200,000 people per day, by far the greater majority of whom came by the tram network.

But the Depression dealt the expansion of the city and also the tram network a fatal blow and passenger use melted away. On 6th January 1988 the last Amtrak train pulled out of the station and that was that.

When I arrived here, there was a copper standing outside talking to some people and so I asked him if it was ok to photograph it. After all, you never know. This is the paranoid nation called the United States of America.

I asked him what they were planning to do with the station, and he replied
nothing
So now we know. 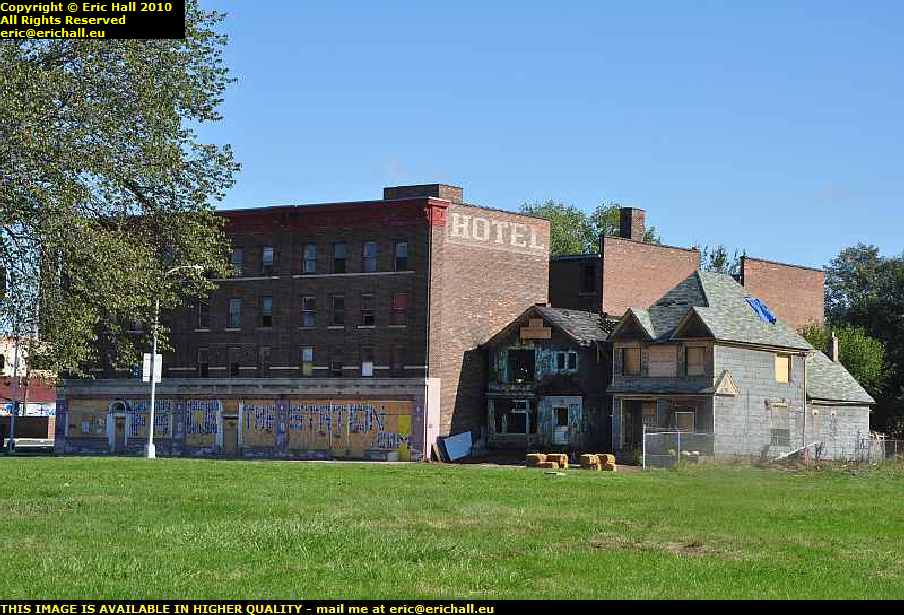 But the Depression hasn’t yet finished with Detroit.

Frankly, with all of the industry collapsing or moving away, the city is dying. And it looks like it too. Everywhere that you go, buildings that aren’t demolished lie abandoned and looted and the place looks something like Fallujah after an American offensive (and nowhere have the Americans been more offensive than in Fallujah).

This is the view across Roosevelt Park from the station. And it was this photograph, as well as several others, exhibited elsewhere, that let to the epithet “ruins photography” being hurled at my work. Still, I’m not here to please everyone – I’m only intending to please myself. 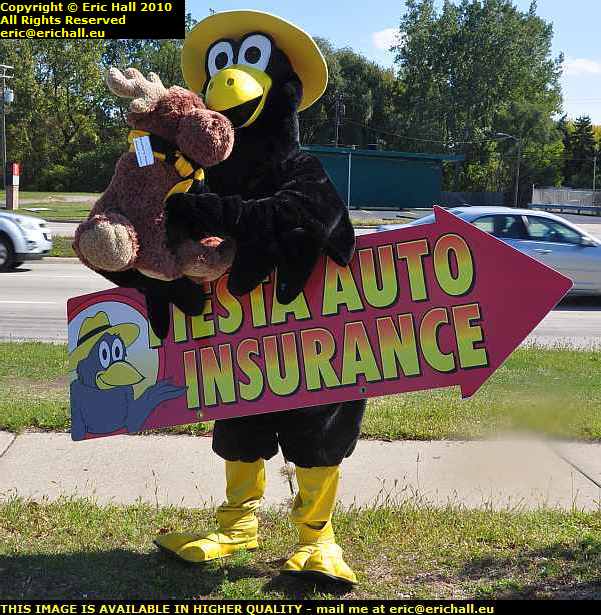 But some of the citizens in Detroit have managed to maintain their sense of humour despite everything that the world has thrown at them.

Here’s a walking advert for an auto insurance company, and he was pleased to make the acquaintance of a fellow-traveller. The scene certainly brought a smile to the faces of many people going past and makes a change from ruins photography, doesn’t it? 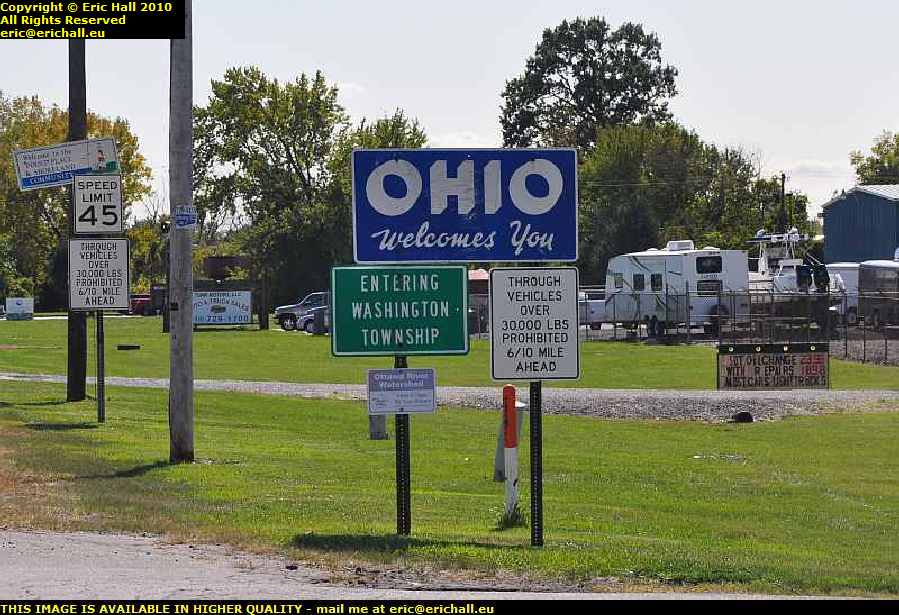 I wasn’t long in Michigan. Just a little further down the road is the Ohio State Line and I stop to take a souvenir photoin order to celebrate our crossing.

This is now much more like rural USA, where I am hoping to be. I find urban areas so depressing, even affluent ones. But I’m not too sure about the 45mph speed limit. I hope that that is only a local arrangement.

All around the southern shore of Lake Erie I’ve seen loads of signs “say no to wind turbines” – all identical and all supplied by an organisation financed by the coal owners of the USA. 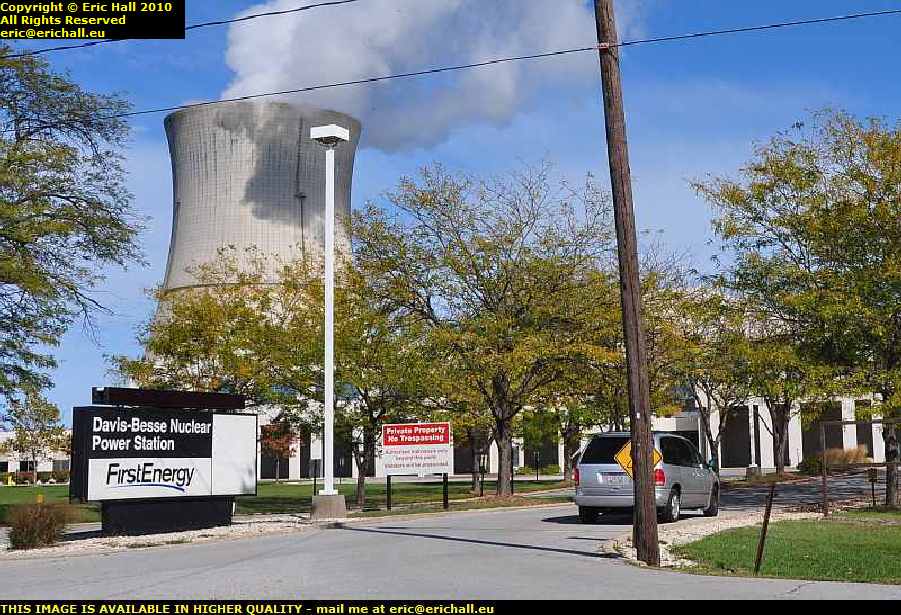 But I haven’t seen a single sign against the nuclear reactor just here at Oak Harbor.

And that’s so surprising too seeing as in 2002 a large corrosion hole was discovered in the reactor head. The plant was closed down for two years “for maintenance” and the owners were fined a total of $33 million.

I think that that would worry me much more than a couple of windfarms. I just don’t understand the mentality of Americans who are so “suckered in” by corporate business-speak. 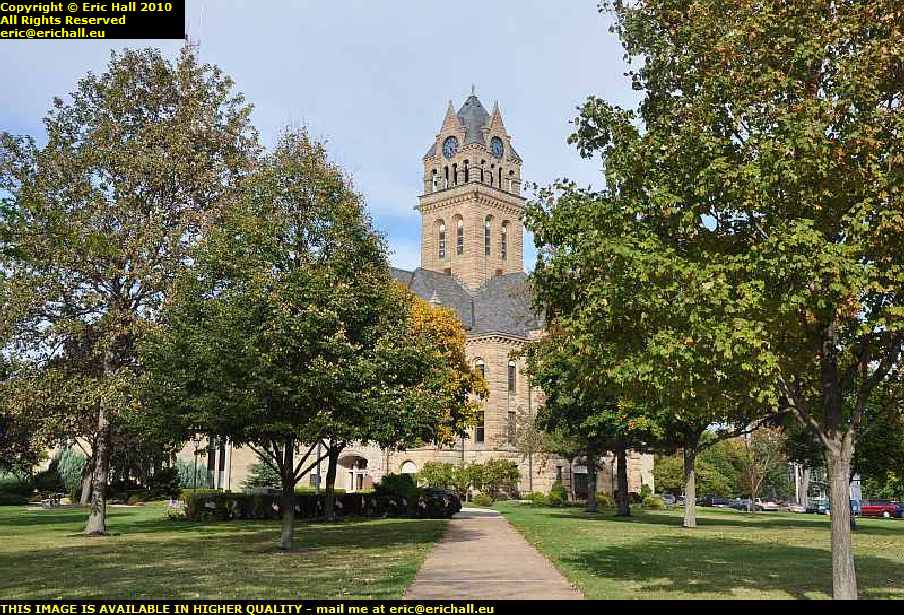 This is the County Court House in Port Clinton, a beautiful little lakeside town on the shore of Lake Erie (or it would be beautiful if there weren’t a suspect nuclear reactor just down the road)

What impressed me about the Court House is that it’s been extended (the USA being what it is, it’s hardly surprising) and although you can see the join, they’ve built it in stone, and matching stone at that. 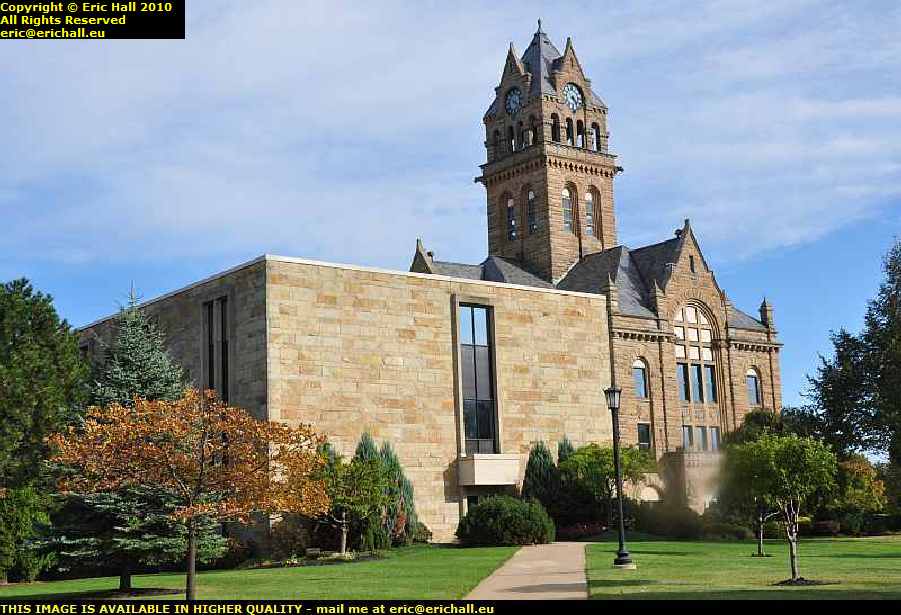 They’ve clearly done their best, which is more than you can say for the UK. had this been on the other side of the Atlantic, a classic building such as this would have been totally disfigured by a glass-and-concrete monstrosity.

But while I was taking this photo a lorry clattered over the railway line behind me. I couldn’t believe it at first – thought that I was seeing things. I’ll have to look into that. 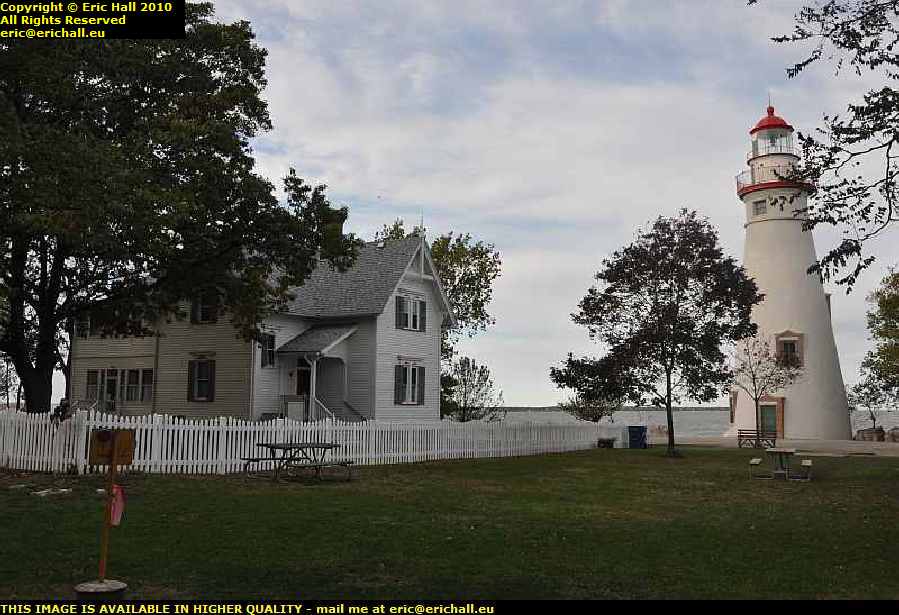 This is Marblehead lighthouse, with a beautiful view of the amusement park at Cedar Point which I have managed to avoid.

It also has a beautiful view of the city of Sandusky, which I have also managed to avoid, and they say that from the top of the lighthouse on a good day, you can see the tall buildings of the city of Cleveland 75 miles away, although why they think that that might be a selling point for tourists I really have no idea. 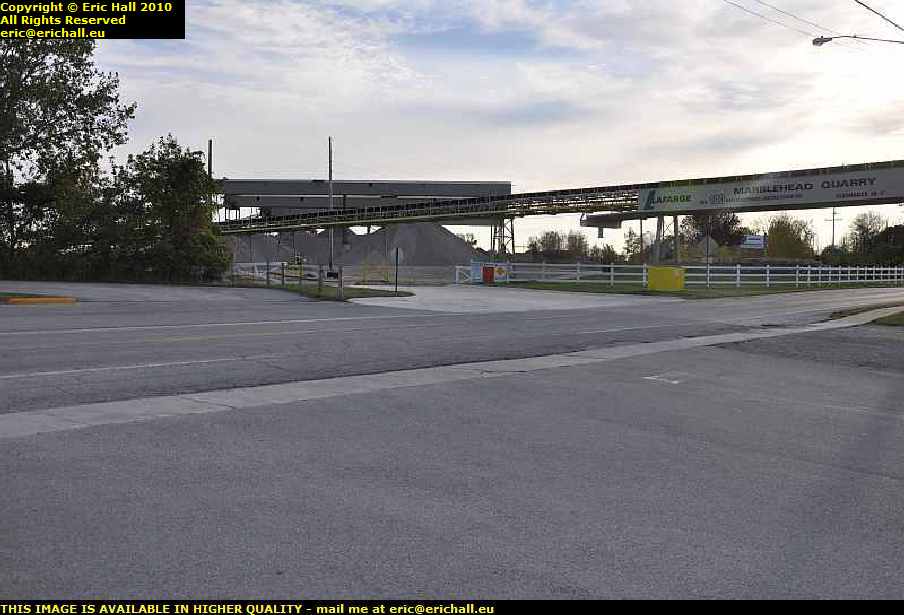 My road in the gathering gloom brings me into the town of Marblehead and its famous quarry, and overhead conveyor that takes the crushed limestone all the way down to the harbour, where it’s loaded into lakers and shipped off to wherever.

There’s only one motel around here and it’s quite pricey, but it’s too late to go to look for anywhere else that might be more suitable to my budget. 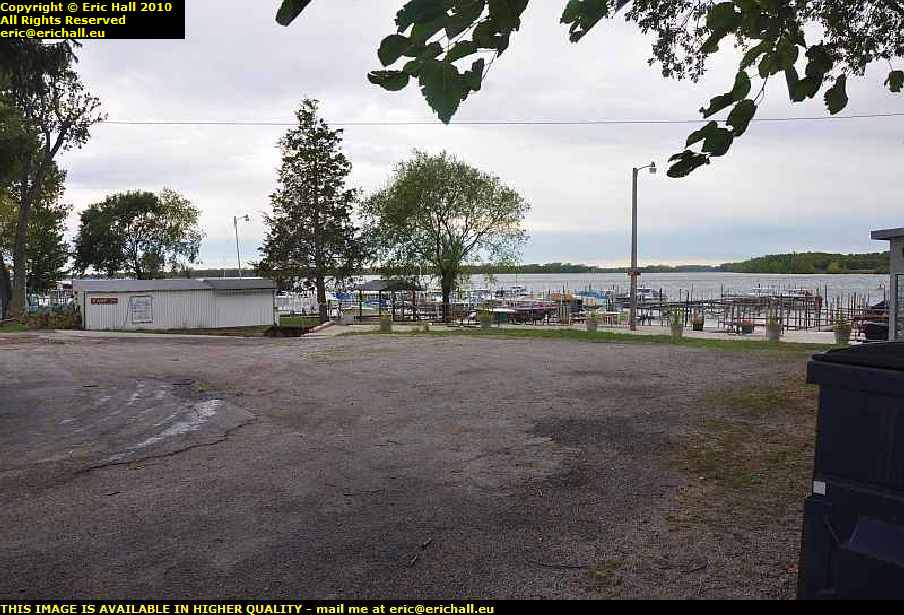 Mind you, it’s well-appointed and comfortable, and good value for money if I could afford it, and the view out of my front door is probably worth a couple of extra quid anyway.

In order to bring my buget a little under control, I had bean burritos for tea. It’s a long time since I had them – New Bern, North Carolina, in 2005 as it happens. And they were just as nice and tasty as I remember them too and filling.

I ordered two and with some chips and a salad from Arby’s and a huge mug of raspberry iced tea it was delicious. And it filled me up.