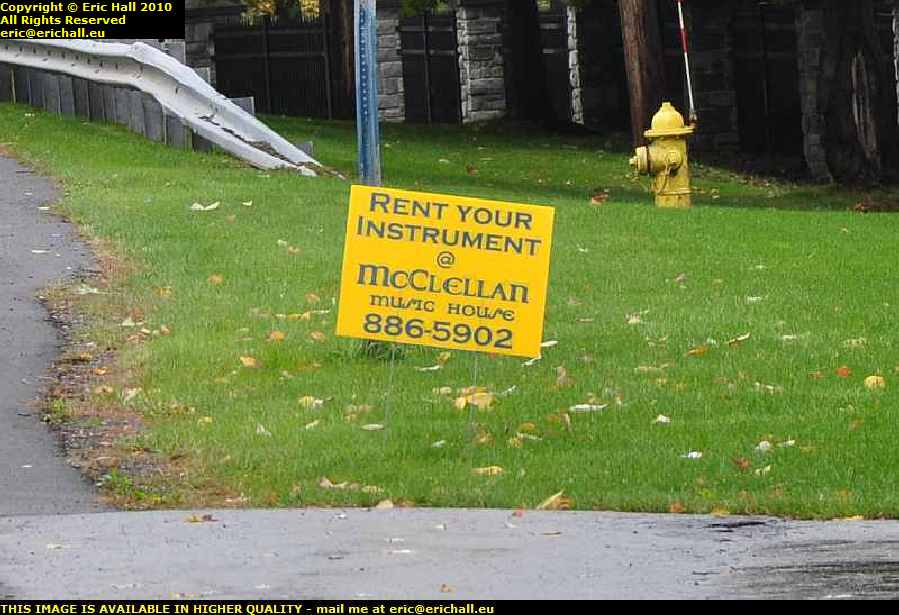 … if I could keep on finding business opportunities such as this one. What a way to earn a living, hey?

But seriously – I can’t live here. Driving through Buffalo earlier today and already in a really bad humour (I’ve had a run-in with another security guard) I came across a woman in tears on the edge of the street, with a baby, and with all her possessions scattered around her. And it was in the driving, streaming rain too.

Apparently the bailiffs had just been. 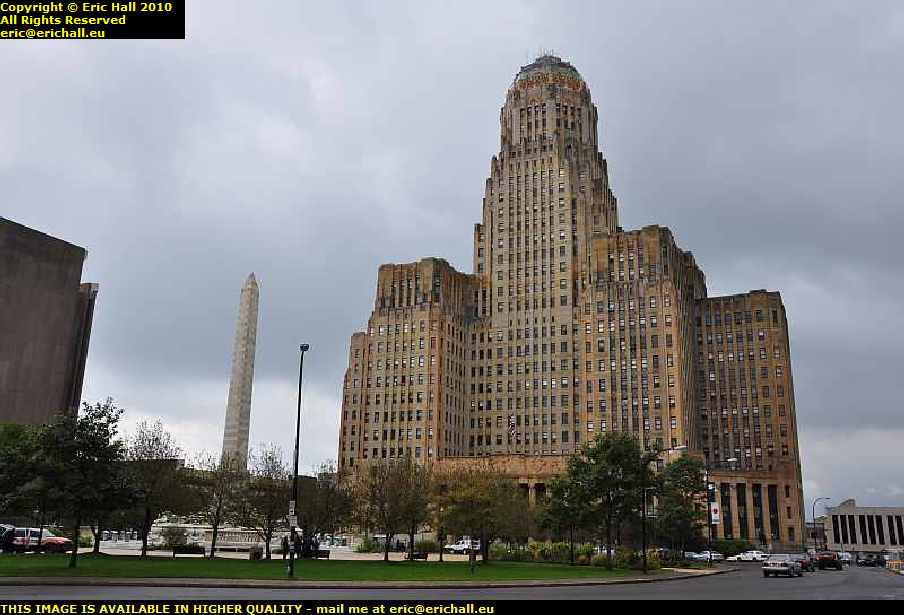 But Buffalo is a city that is already in my bad books, and has been for quite some time. In 1860-something a steamer launched in 1846 – one of the earliest lakers – sank in Lake Erie in a storm.

A few years ago a couple of divers located it and it was raised from the sea bed and taken to Buffalo for restoration. However the mayor declared it an “eyesore” and called in the scrapmen, who promptly cut up this rare, if not unique historical artefact.

In 1813 the British burnt Buffalo to the ground during one of the American wars, and believe me, I was sorely tempted to make my own re-enaction of that historic event.

There can’t be any greater eyesore in any city anywhere in the whole world than the sight of a crying woman and her child out in the street in the middle of a rainstorm with nowhere to go and no-one offering any help. 10% of the American working population is out of work, there are thousands of jobs going every day, and there’s no state aid for anyone. 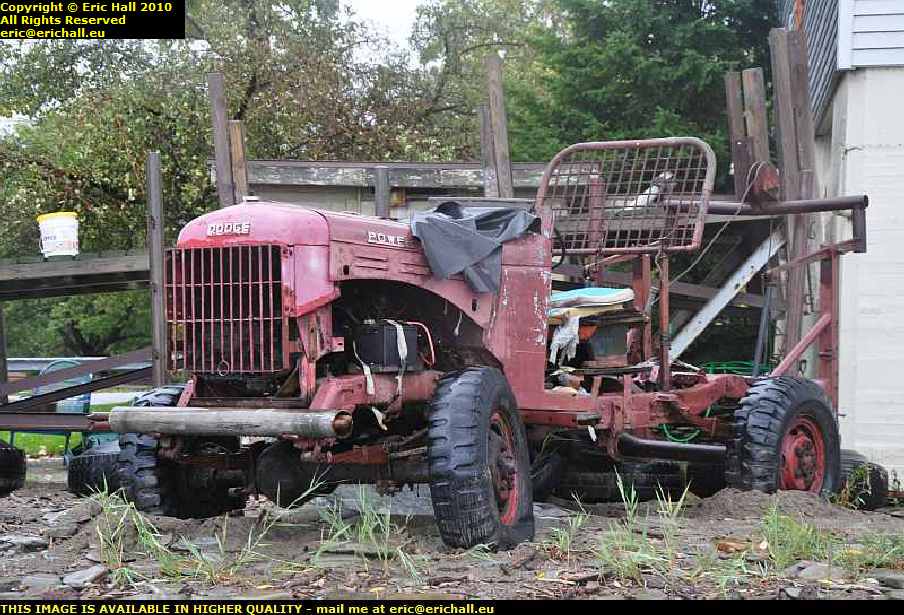 And talking of that, just a short while later, I stopped to take a photo of an absolutely ancient Dodge Power Wagon plant mover used as a haulage truck in a boatyard. Fishing from the quay was an old guy. I got talking to him about things.

“Well”, he said “I worked for 29 years as a shopping centre manager and I was laid off in the spring. I don’t suppose I’ll ever work again and I don’t know what I’ll do now. And in my spare time I was a bailiff for the sheriff’s office but I had to give that up too. It was just so distressing turfing all of these people out into the street.

It’s the rich who are causing all of these problems in the USA – it’s high time a few of them were turned out into the street and made to suffer”.

I once heard someone say that the USA is a great place in which to succeed. Indeed it is, but it’s a dreadful place to fail. If the USA has the highest standard of living in the world, then there must be some awfully rich people somewhere well-hidden, because all I ever seem to encounter are the poor. And there are plenty of them! 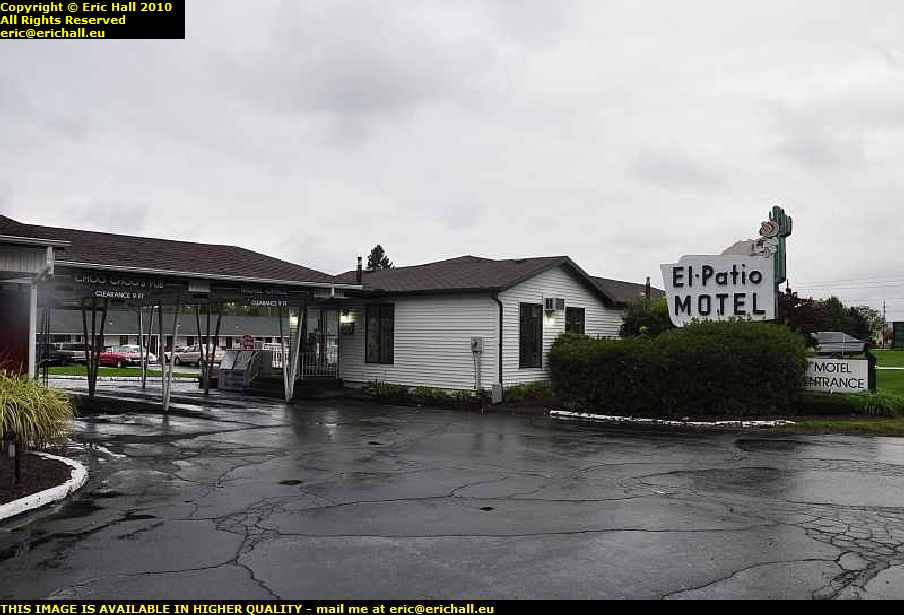 r>After all of that, there isn’t an awful lot to say about my journey. I wasn’t really in the mood for much.

I left my rather expensive motel on the edge of Erie, Pennsylvania, in the rain and the further along the road that I travelled, the more the weather. Just like my humour did, I suppose. It was going to be one of those days. 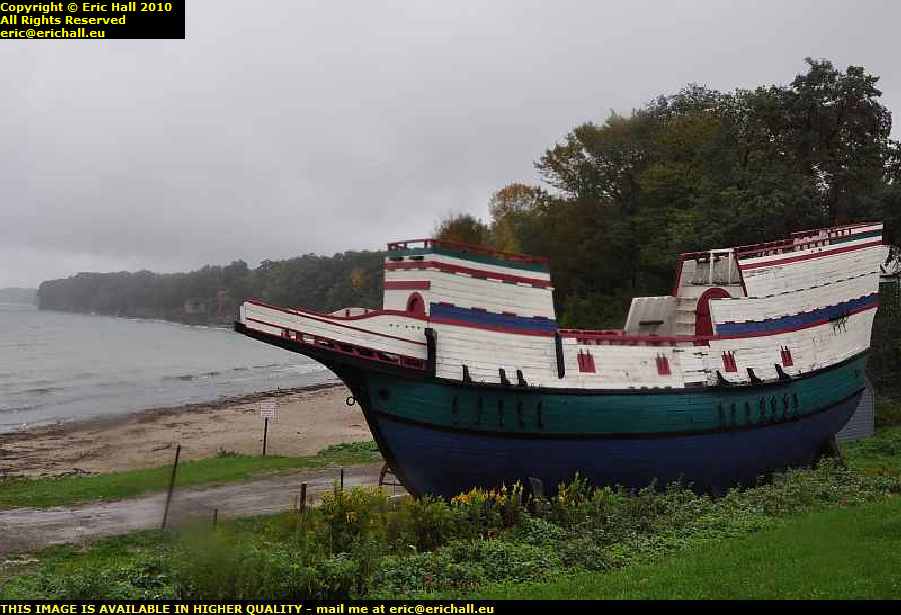 But it’s astonishing, the things that you encounter along the road. At Westfield, near the quaintly-named Barcelona Harbour, I came across the Sea Lion.

It’s a replica of a British 3-masted sailing barque of the late 16th Century and it gives you an idea of the size of the ships that they used to cross the Atlantic in the early days of exploration.

But I can’t think what was going through their minds when they decided to build it, and why they have let ths ship degenerate subsequently into such a poor condition. Seeing that the bay in which the ship is situated is so depressing, perhaps they wanted their barque to be worse than their bight. 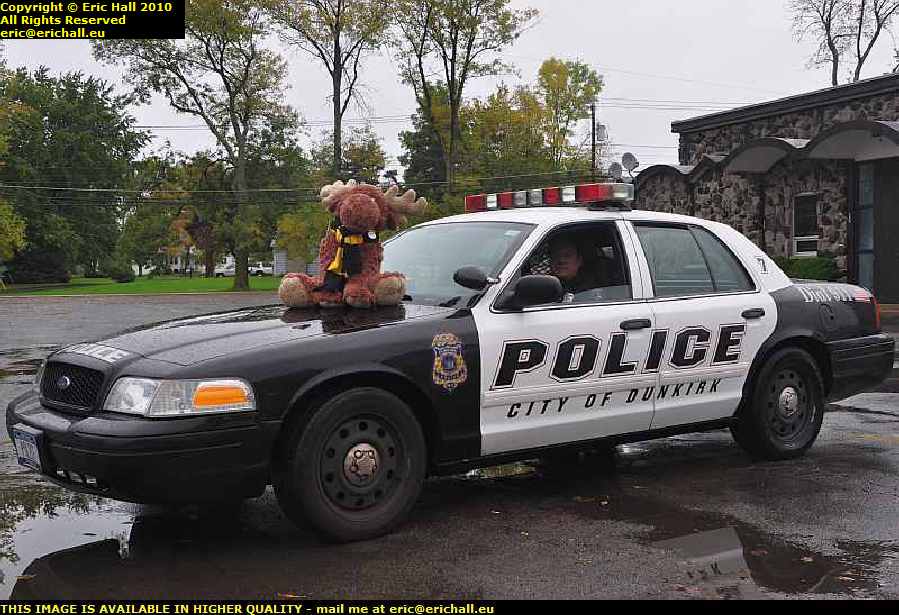 Strawberry Moose had a good photo opportunity today as well.

I’d stopped at a local Moose Lodge to see if there were any friends and family of His Nibs in the vicinity, but a local copper stopped to find out what was happening. So having given my explanation, he very kindly (and much to my surprise) allowed His Nibs to have his moment of glory.

So let’s hear it for the New York Police! 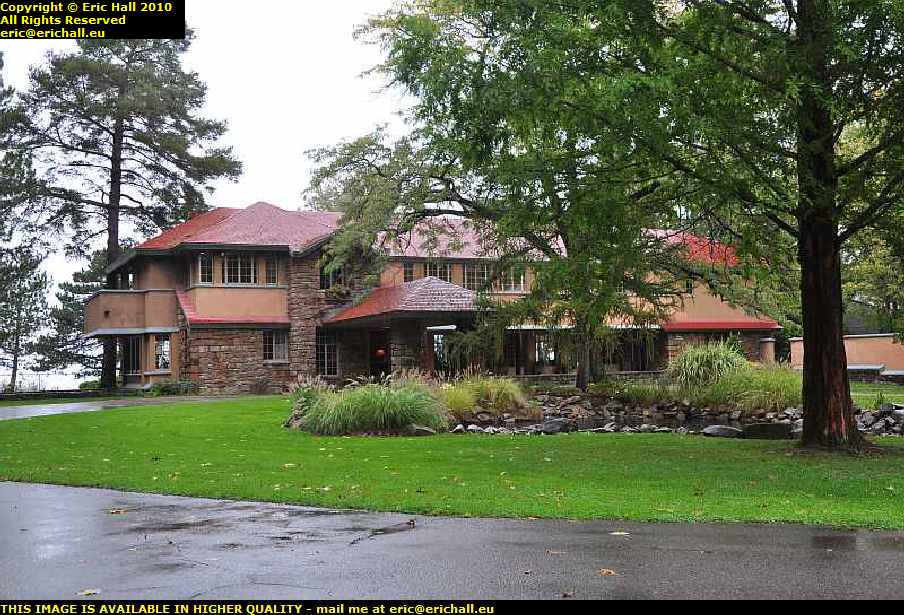 I also stumbled upon Graycliff – one of the houses that was designed by the famous architect Frank Lloyd Wright.It dates from the late 1920s and was built for the Martin family.

The were wealthy entrepreneurs in Buffalo and in fact sponsored Wright in his early days, but were wiped out in the Depression and the house was sold to a Monastic Order who used it as a school. 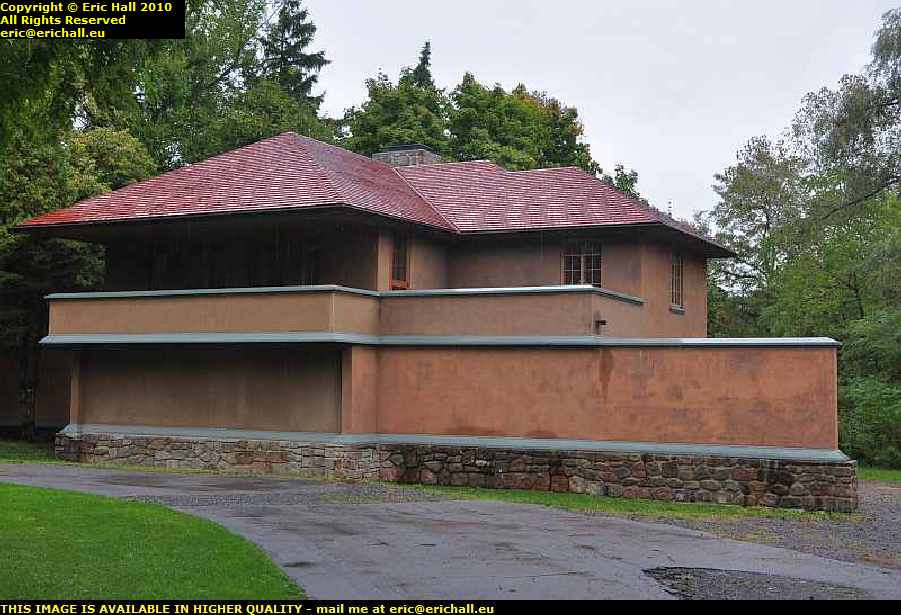 When the school was closed in the 1990s, there were plans to demolish the place and build a huge housing estate here, but the property was saved by a preservation group (a rare event in the USA)

And famous architect as Frank Lloyd Wright might have been, he designed his house without guttering as it would spoil the aesthetic effect. I suppose that that was much more important than spoiling the foundations and the clothes of the people entering and leaving the property. 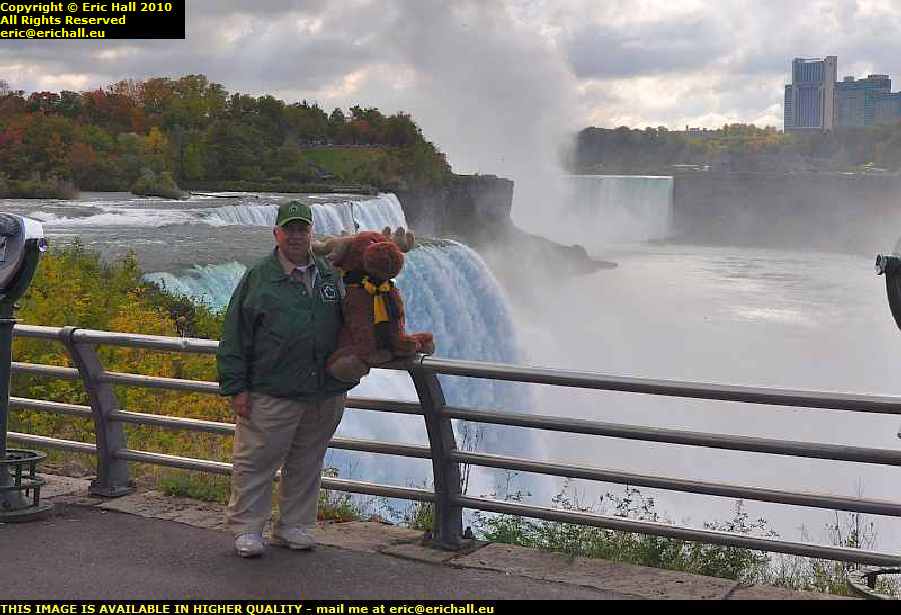 No-one can pass by Buffalo without going for a look at Niagara Falls and once more, Strawberry Moose was in luck as a Tourist Guide/Security Guard agreed to pose in the same photograph as His Nibs.

It’s all quite astonishing, this. All of these officials and dignitaries and so on agreeing to be seen with him. Maybe there is an underlying sense of humour in the USA after all and I have been missing it for all of these years. 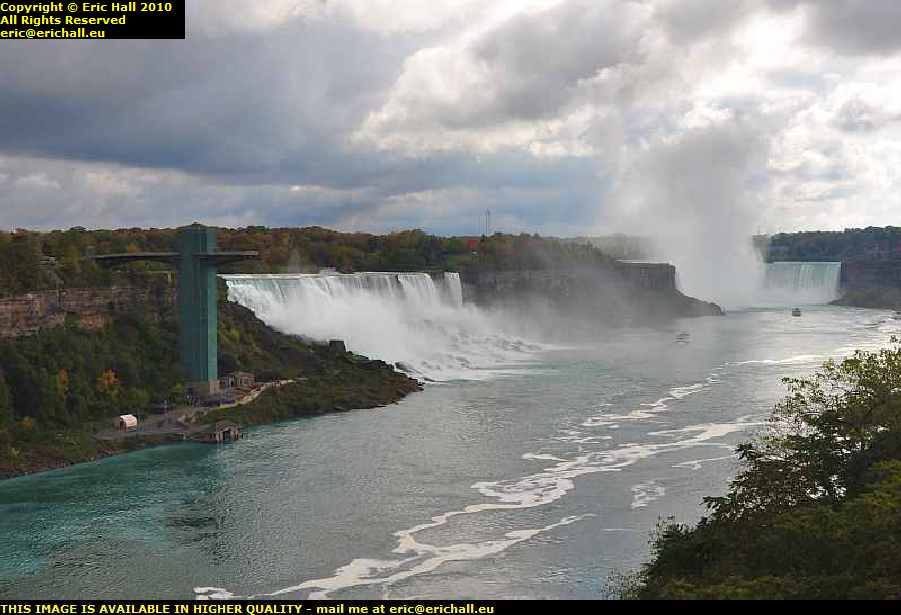 The view from the Canada Side of the falls is even more impressive – well-worth the walk across the bridge to the other side of the river.

What was even more impressive was that parking for the whole day (had I decided to stay that long) was just $5:00, entry to the park was free, and the border crossing in and out of the USA was relatively painless. I wasn’t expecting anything like that. 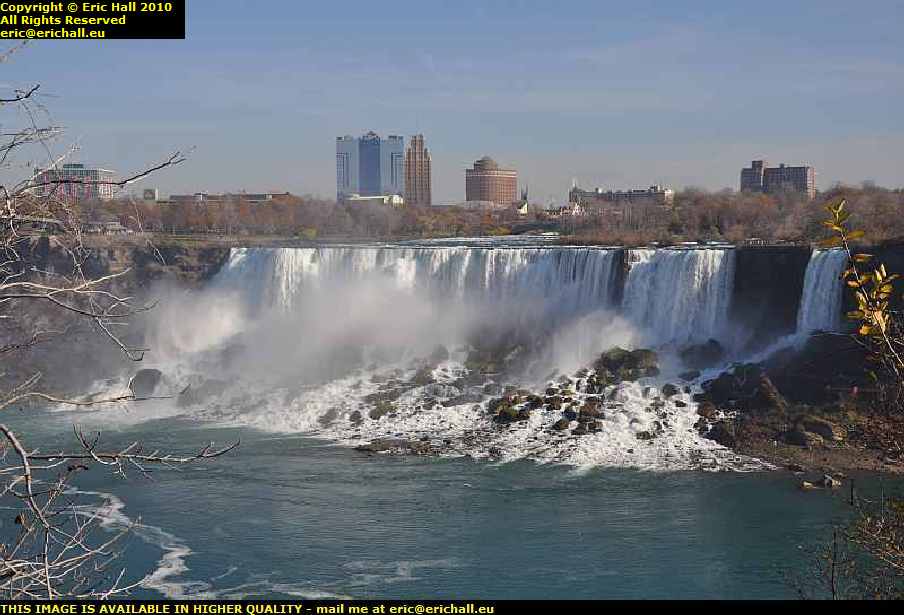 If you have been following my adventures from previous voyages you will be well-aware that I have been extracting the urine from the United States over its self proclaimed status as “Land of the Free”, because everywhere I have ever been to that has any kind of importance, it has been “Please Prepare Your Admission Money”

It’s only right and proper that I record the events surrounding my visit to Niagara Falls. 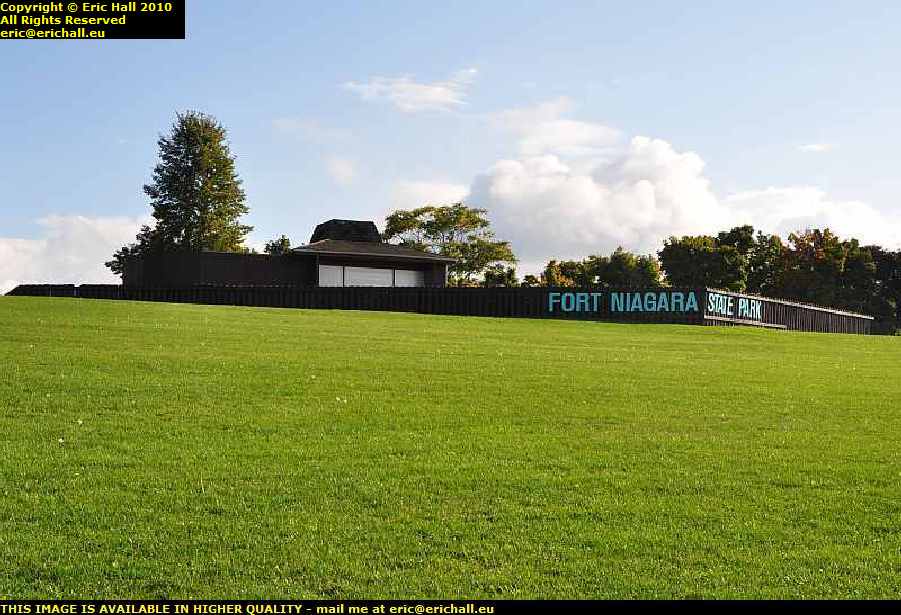 At the head of the river, on Lake Ontario, is Fort Niagara. There’s a British fort on the other side of the river directly opposite and during the various revolutionary wars and so on, there have been a good few battles between the two sides.

There was also a major battle between the British and the French in 1759, and in the grounds was a German Prisoner-of-War camp from World War II 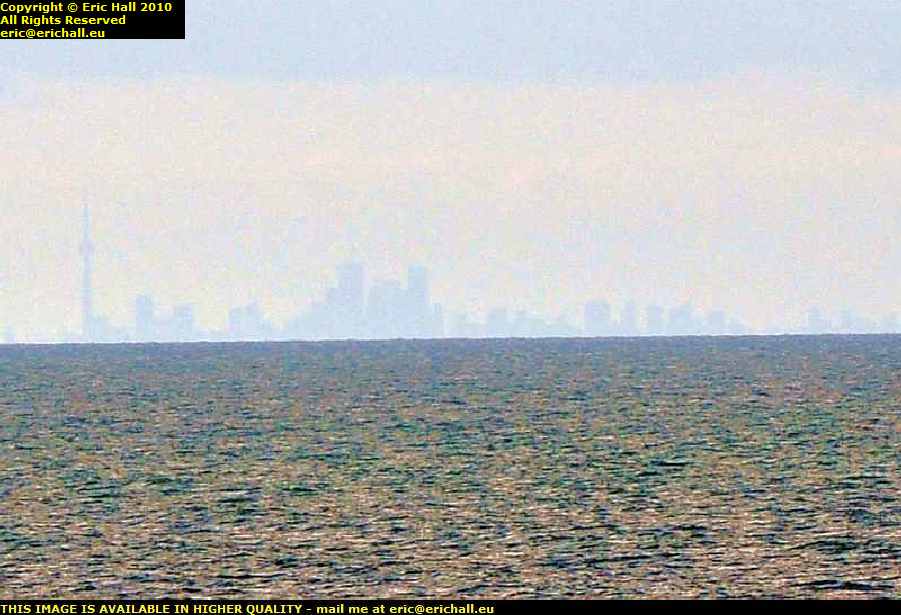 Something right across the lake caught my eye but I couldn’t make out what it was, so I photographed it at the fullest extension of the zoom lens in order to have a play with the image later.

And this is what I saw – it’s the city of Toronto – probably 30 miles or so across the lake and it’s astonishing what a really good camera and lens can capture in the right kind of weather conditions.

You can see that the weather has brightened up – and so have I by now.

Tonight, I’m now in a small town called Ontario, in Upper New York State. Tomorrow I’m going to stay on the south side of the St Lawrence as far as I can until the last bridge across (round about Quebec I reckon) and then head north to Labrador.