Yes – I went into Truro today.

Now if Truro were ever famous for just one thing it would be the Teachers’ Training College. If you have been following my journey you will know that Nova Scotia is a province of mainly small villages in isolated situations and until the road-building process that started in 1918 and is still not yet finished these villages had no connection to any other.

But if you can’t bring the children to education the province realised that it needed to bring education to the children and in 1876 it created a small College in Truro to train teachers to educate children in the wilderness.

These teachers, once they had qualified, were sent to these isolated villages, lodging with parents and teaching children in empty fishing sheds and generally integrating into the village to which they had been sent. And this programme continued until 1960.

The college itself is a magnificent building crowned with a copper dome and spire, and features as the centrepiece of the Truro Heritage poster. And when I came here in 2003 I had a quick look for the building but couldn’t find it.

However today, with more time on my hands, I wandered around until I found it. And I had to find it too, because the people whom I asked, including the lady in the Tourist Office, knew nothing about it. 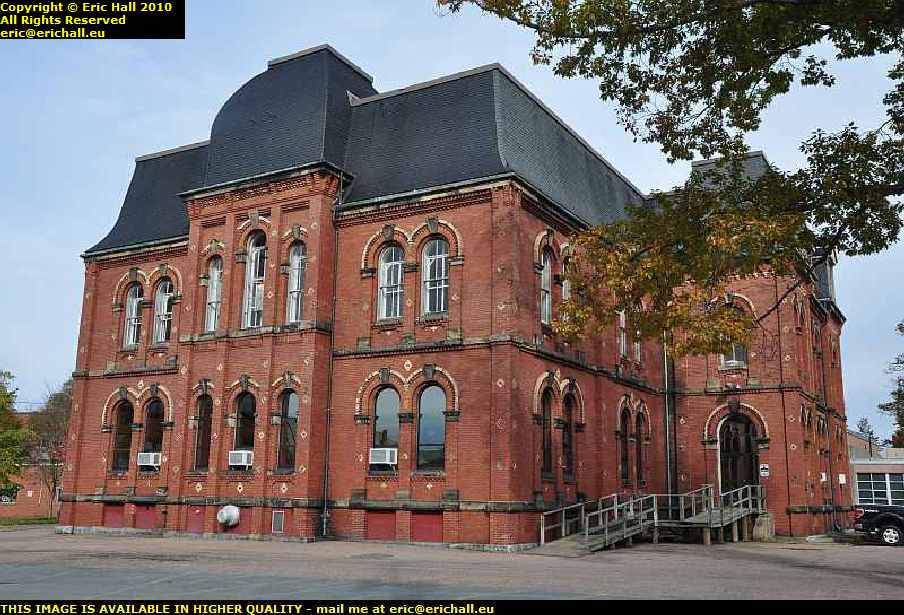 So here’s the building – the most significant in Truro and probably the most influential in Nova Scotia.

And the reason I couldn’t find it is that there is a huge concrete bunker – a public library – right in front of the building, built on the lawn, and a huge modern building – the police station – built in the old courtyard (this photo was taken around the back). 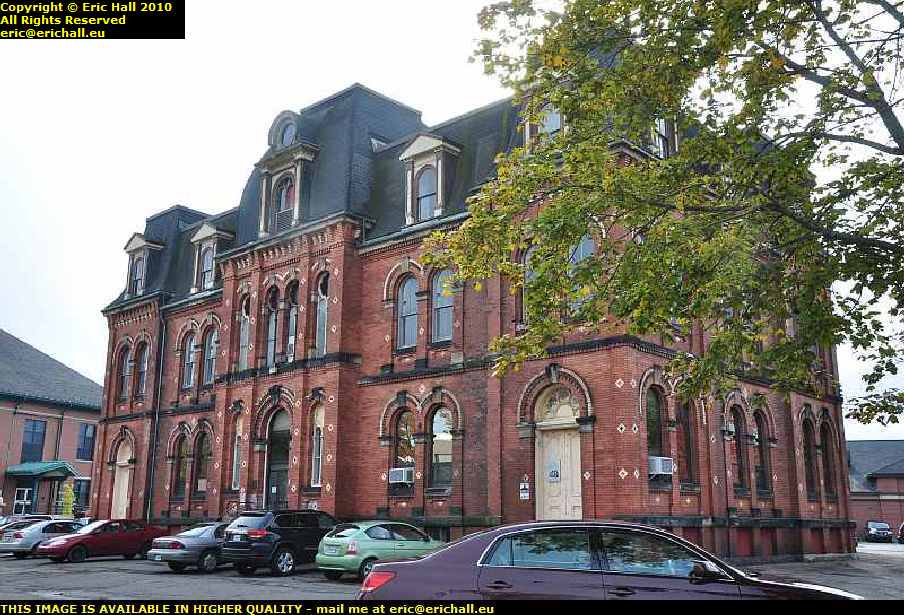 And of course the copper dome and spire have gone – sold for scrap, I shouldn’t wonder.

The building has been abandoned for probably 30 years and there’s a notice on the wall – “The Truro City Council is actively seeking new opportunities for this building”. So how about using the money spent on the new police station to refurbish the building and moving the police into here? Or demolishing the library and ……

But I’m not going to go on and on about this because I’ll get more and more depressed. My opinions about Canadian preservation efforts is starting to sink to the same depths as those of the USA. Or of France. Or of the UK. People no longer have any pride in their heritage.

So to cheer myself up I went in search of what may well be the oldest intact steam railway locomotive in the world. 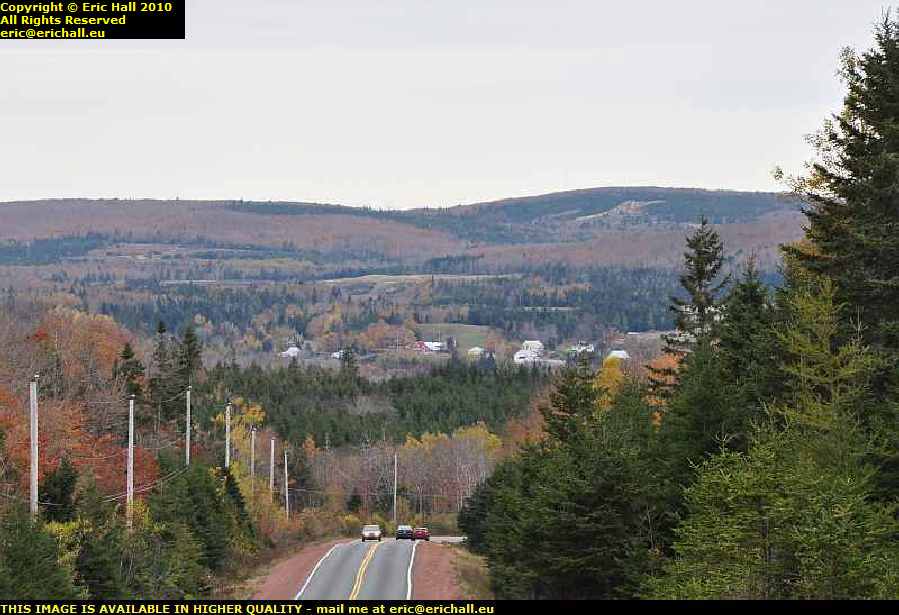 However, it also took me into a load of traffic as you can see and I’m not at all used to this. Still, you can’t have everything, I suppose. 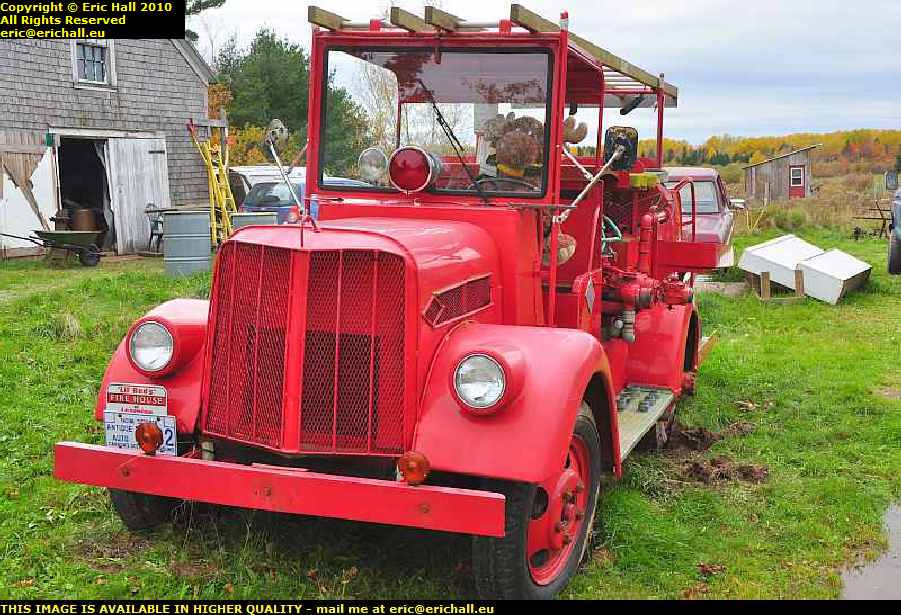 You can’t have this either, because the owner has no interest whatever in parting with it, although Strawberry Moose has a good go at driving it.

It’s basically a standard 1930s Ford 2-ton chassis with twin rear wheels, a single-wheel front and a Ford V8 flathead (sidevalve) engine and formerly belonged to a small paper mill out on the coast in British Columbia, a mill that was isolated from the main road network. 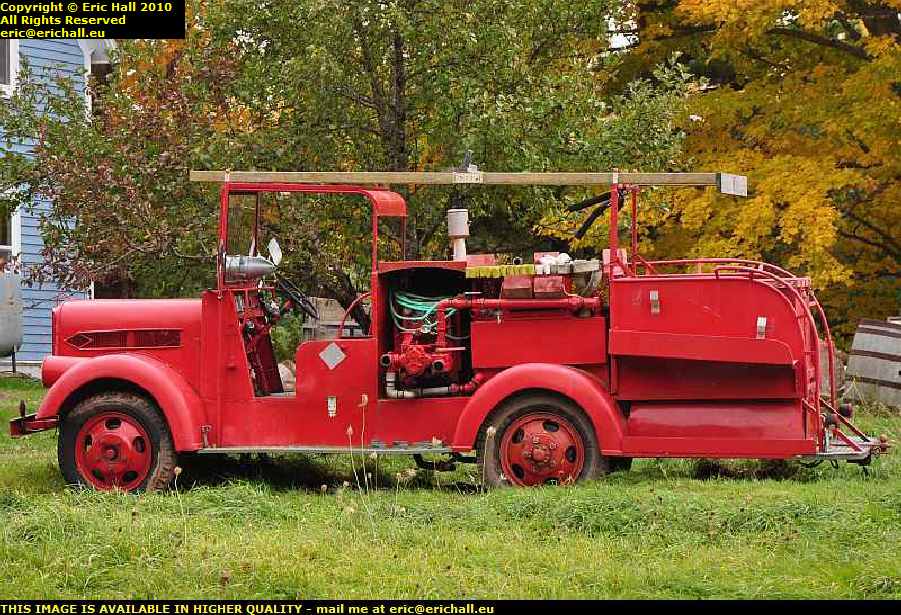 They built it themselves after a fire in the mill during the 1940s had caused considerable damage because they had no means of extinguishing it.

And the next fire, in 1994, he fire engine had been out of use for so long that it wouldn’t start and so the mill burnt down again. Consequently they junked it and the present owner rescued it and, having fixed it, drove it back here.

At least, that cheered me up considerably. 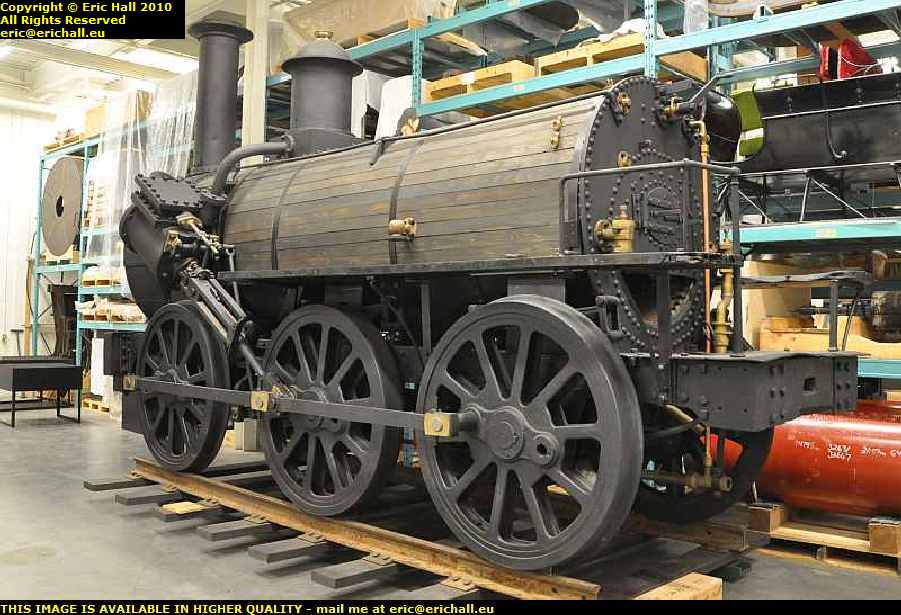 I eventually tracked down my steam locomotive, thanks to the owner of the fire engine who put me right.

A group of engineers have liberated it from its depressing situation on a plinth outside in all kinds of weather and, having restored it to something resembling working order, it’s now in the Nova Scotia Museum of Industry and I was lucky enough to be allowed in to see it.

The locomotive is called Albion and came to Nova Scotia from Newcastle upon Tyne in 1854.

For a long time it was considered that 1854 was the date of manufacture, but I would find this hard to believe without convincing evidence. If you compare this design with any other design of 1854 and the evolution has been considerable.

I’m not going to go into a long discussion here because I have expounded at considerable length elsewhere, where you can read at great length exactly what I think about this locomotive.

What is comforting about this is that the people who, while they might not know exactly what it is that they have, are fully aware of the fact that they are in possession of something that is truly special and they have gone to considerable lengths to take care of it. That can only be commended.

And that cheered me up considerably too 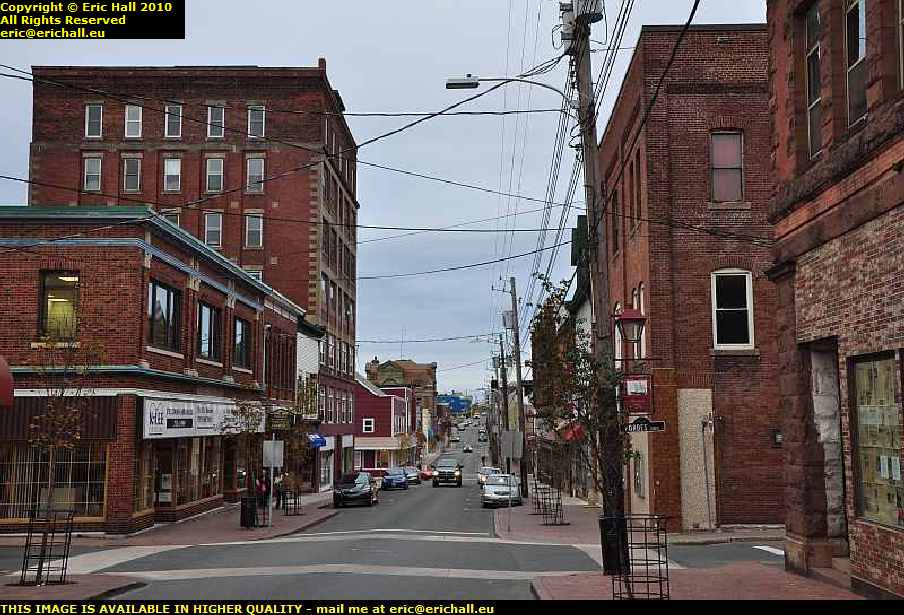 Having been bundled out of the museum with indecent haste because it was closing time, I wandered off to have a look at New Glasgow.

This was another town with quite an impressive past, growing rich on all of the industry and coal mining that took place in the vicinity, but now all of this is long-gone and the town is a shadow of its former self.

There were houses on sale here for as little as $26,000 which, for a European such as myself, is an astonishing price. You couldn’t buy a garage for that in the UK, never mind a house. 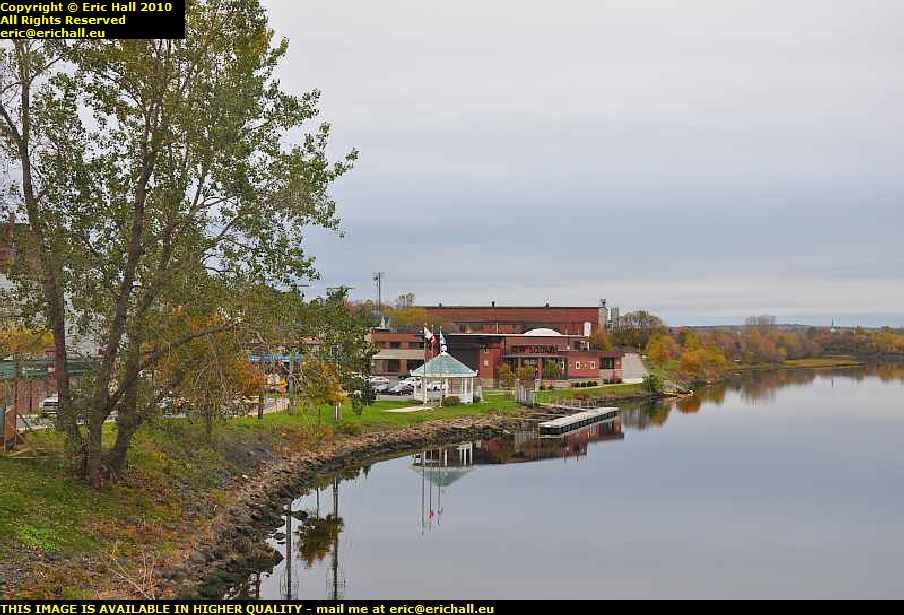 That down there is a new theatre, so if you did come here to live, there would be something to entertain you.

But on the site of the theatre and its car park, between 1821 and 1918, there were 5 shipyards and a total of 210 sailing ships were built there. The largest was one of 1400 tons, would you believe.

The ships were built by local men using local materials and from here they went out to sail the world. You would never believe that now. 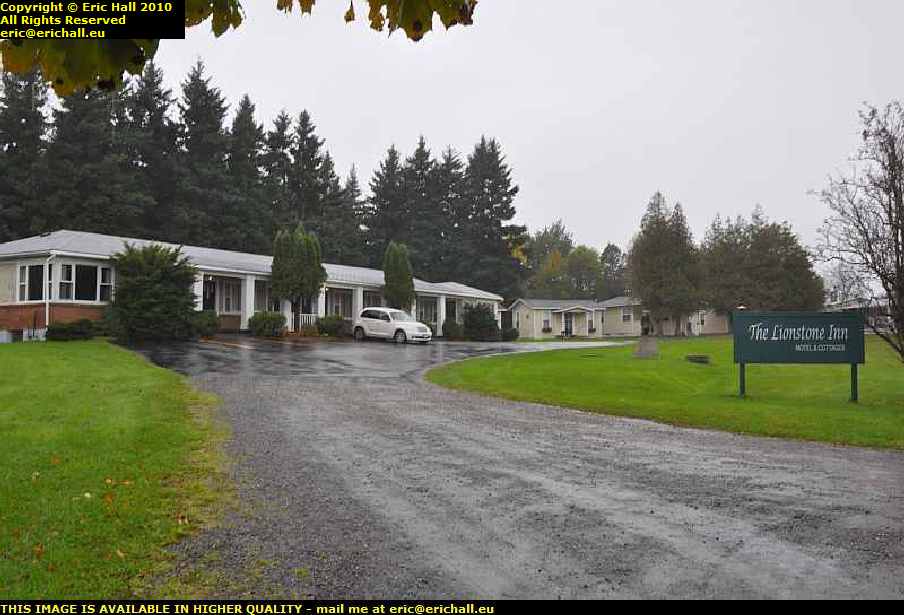 You’ve all seen this before. This is the Lionstone Motel up the road in Pictou and I stayed here in 2003.

Time was marching on and I didn’t have time to look for another motel (I believe in spreading my largesse about) so I came back here. No reason why not, after all, I was quite comfortable here last time. 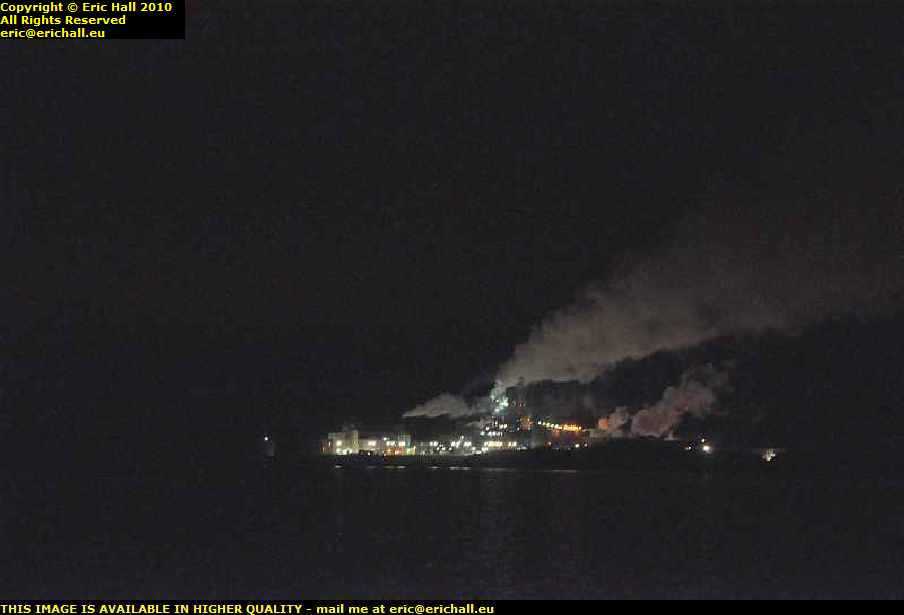 The restaurant that had served me a decent meal last time had closed down, so I bought some chips and went to look at the Bowater paper mill – one can’t escape the smell of wet paper around here.

With a better camera, this photo worked much better than the one that I took in 2003.

So having accomplished that task, I went to heat up some beans in my slow cooker. Pour them over my chips and I’ll have a meal fit for a king.