In bed at a reasonably early hour and despite the odd trip down the corridor it was totally painless and I didn’t feel a thing until the alarm went off at 06:00. I wouldn’t mind doing that again. I felt much better after that.

And we had a slow start to the day seeing as how not much was likely to happen here. Darren and Amber went off to the tyre depot, and after a somewhat late breakfast Rachel and I spent the morning doing stuff and having a long chat about this, that and the other.

But these insurance problems are never-ending, aren’t they? We went to print off the proposal form – and the printer ran out of ink. It’s almost as if I’m destined not to take out this insurance, isn’t it?

However, as I have said before … "and on many occasions too" – ed … we don’t have problems, we have solutions. So I forwarded the e-mail up to the tyre depot and they printed it out up there and brought it back when the place closed. So what’s going to be the next hitch now?

For lunch I had a couple of wraps filled with vegetables and my vegan cheese, and then we we had a little task to perform. The golf-cart had broken down and so it needed to be looked at. After quite a few complicated manoeuvres and procedures, one of which involved a rather large hammer, we came to the conclusion that the starter solenoid had failed. That’s a mail order job for a later date.

But while I was down there I washed off all of the small plastic storage boxes that I had taken out of Strider the other day and forgotten to clean off. They’ve come up nicely and are sitting there drying out now, ready to go back inside the pickup.

We hadn’t finished yet either. The air-conditioning unit in the living room had packed up a while ago and a new replacement had arrived. We decided to fit it, and that involved cutting a new wooden blocking panel as the new unit is larger than the old one.

We had already made a start when Darren’s brother-in-law turned up. He’s a joiner by profession and had all of the right tools with him in his truck, so he took over the work and the job was done in half an hour. Having the correct tools doesn’t half make a difference to a task like this.

By now it was tea time and we were quite numerous – Amber had a friend round and there was also Darren’s sister and her husband (he who had helped us with the air-conditioning), so tea stretched out for a good couple of hours while we sat around chatting. 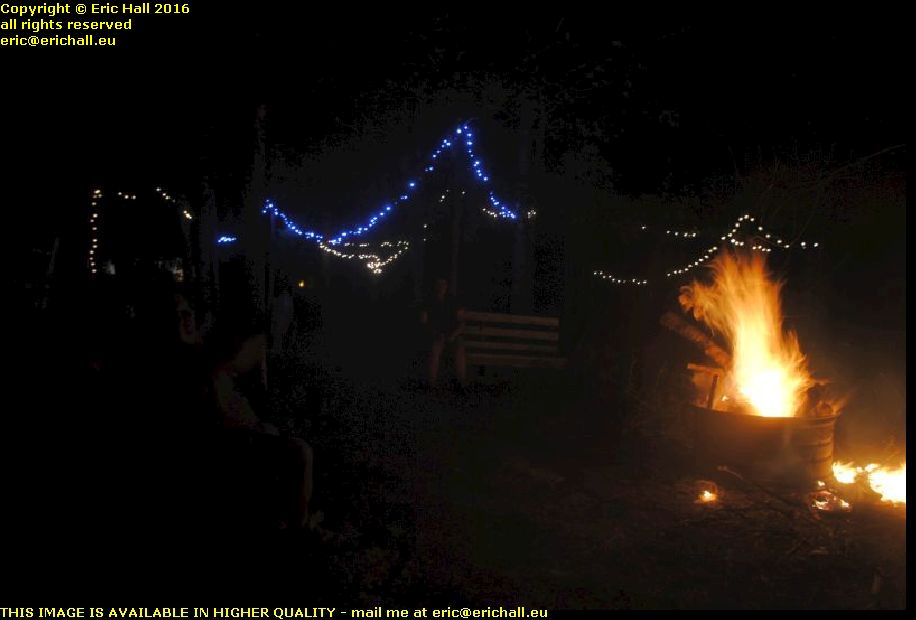 It was a beautiful evening and as a rather large pile of rubbish had been gathering all around the place, we decided that we would have a garden bonfire.

This was really quite pleasant, all of us sitting around outside toasting ourselves by the flames in the warmth of a September evening, and it’s a shame that the photo hasn’t done the scene very much justice.

You might remember back from March that the big Nikon D5000

has now officially ceased once more to function, and I’m having to work with a cheap one that I bought in Quebec in 2012 when I had a similar difficulty. I was planning on buying a much better camera but I’m not sure whether there’s much point in spending a shed-load of money on something like that, given my state of health.

I wasn’t out for all that long. It was soon bed-time for me so I came inside, ready for an early night and hoping that I would have just as much of a good sleep as I had had the previous evening.