Who was it who said something about “an early night” last night then?

But I did manage to drop off to sleep at some point, and I was back at my old school, with a pile of girls, climbing up (not down) a rope of sheets trying to get in through a window or onto a balcony. And as for why I might be doing this, I’m afraid that I don’t have the foggiest. It’s gone clean out of my mind.

For the first time in ages I slept right through until the alarm went off and, resisting the temptation to turn over and go back to sleep, I went off for breakfast. Mind you, I paid for it later on in the day, crashing out at about 17:00 for an hour or so. 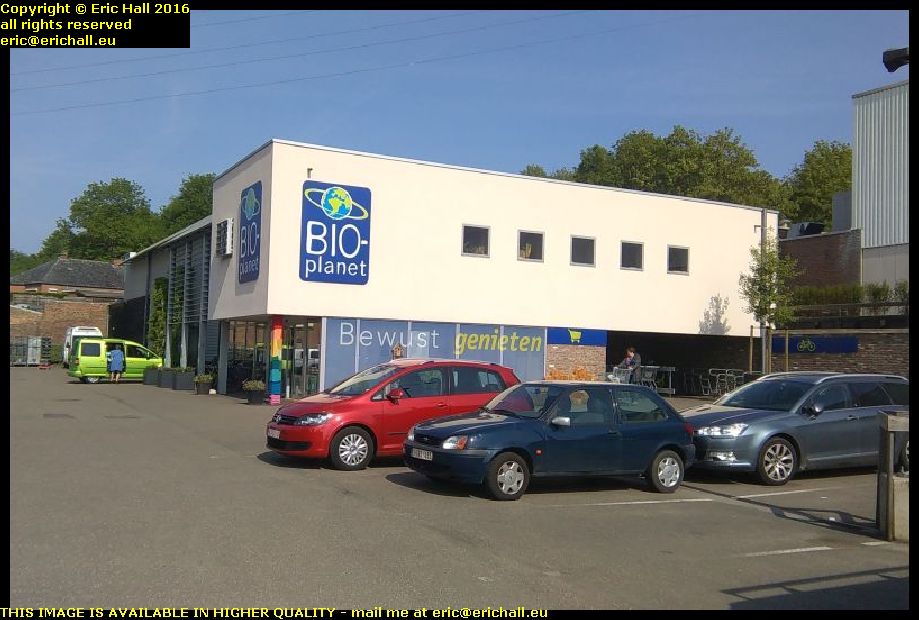 After breakfast, I went off on a prowl with the intention of exploring this famous bio shop in the Tiensestraat in Bierbeek about which I had heard so much. I’d driven past it the other evening but I didn’t have time to stop.

It’s certainly good at what it does, that’s for sure, but for me it was a little disappointing because there was none of the vegan cheese that I like. There was some – a kind of spreading mozzarella substitute – so I bought a couple of packs to see how it goes 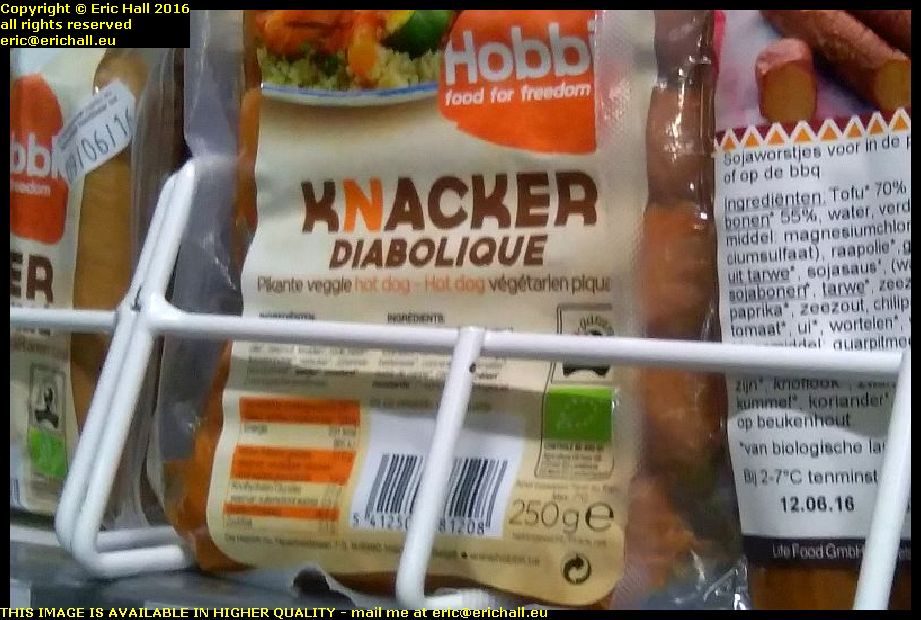 I also bought a beautiful seeded baguette for lunch (which tasted delicious) and a couple of raisin buns, but I’ll be passing on the Knacker diabolique vegan sausages though. No matter how nice they looked, I couldn’t cope with the name.

But here’s another example of me having to change my national stereotypes. This shop, the Bio Planet, is another establishment that offers free coffee to customers, and there are a few broken biscuits to sample too, so I’ve added it to my ever-increasing list.

Things are definitely looking up here in Belgium. 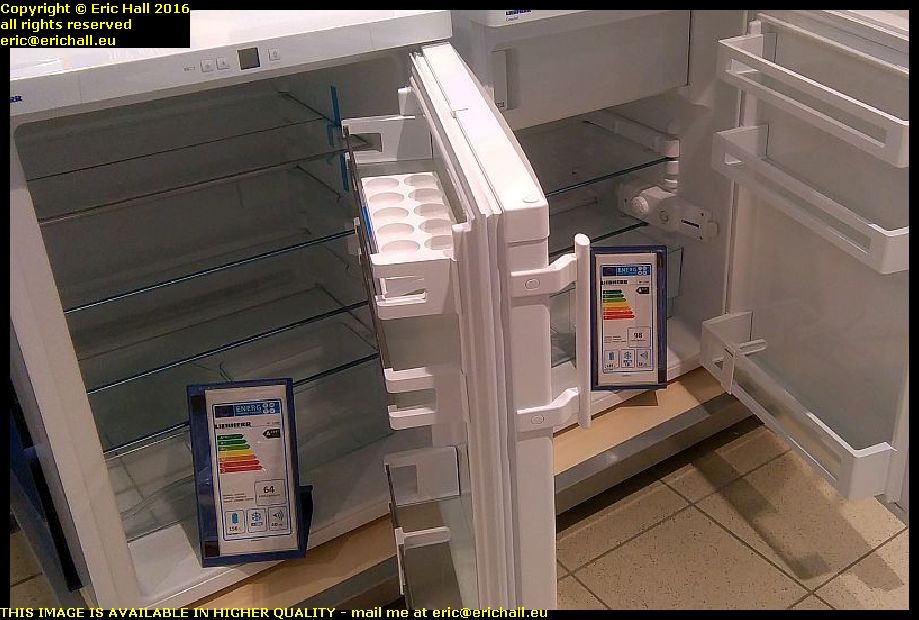 And that’s not all either.

Just across the road is a Krefel electrical appliance shop so I went over there for a butcher’s. And I was astonished – really astonished. When have you EVER seen a standard-size domestic fridge that has a rated annual consumption of just 64 kilowatts per year? That is amazing.

And if you think that the fridge next to it, the one with freezer compartment, is equally astonishing at 98 kilowatts per year, there was one further down the row that had a rated consumption of just 93 kilowatts per year 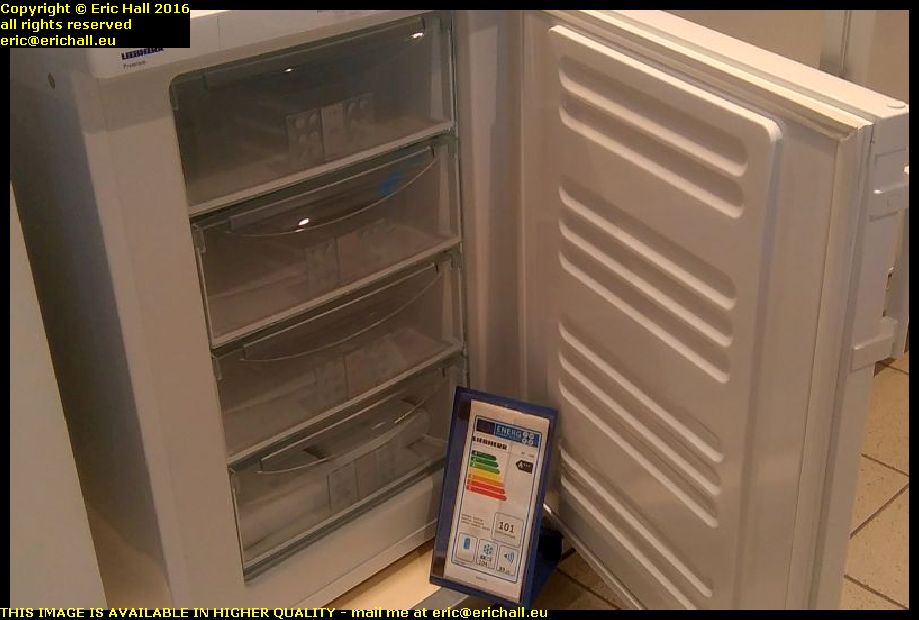 And if that isn’t enough, the best is yet to come. Here in the shop was a standard-size freezer with an annual consumption of 101 kilowatts per annum.

This figure, and the one of 64 kw/A for the fridge, are figures that I have never ever seen for these appliances and had I been in a better place in my life right now, the fridge and freeze would be coming back home with me.

The fridge actually uses much less energy than the little 12-volt fridge that I have, and the freezer would go nicely in the barn running off the solar panels and wind turbine in there. I’d be set up for life with this lot. 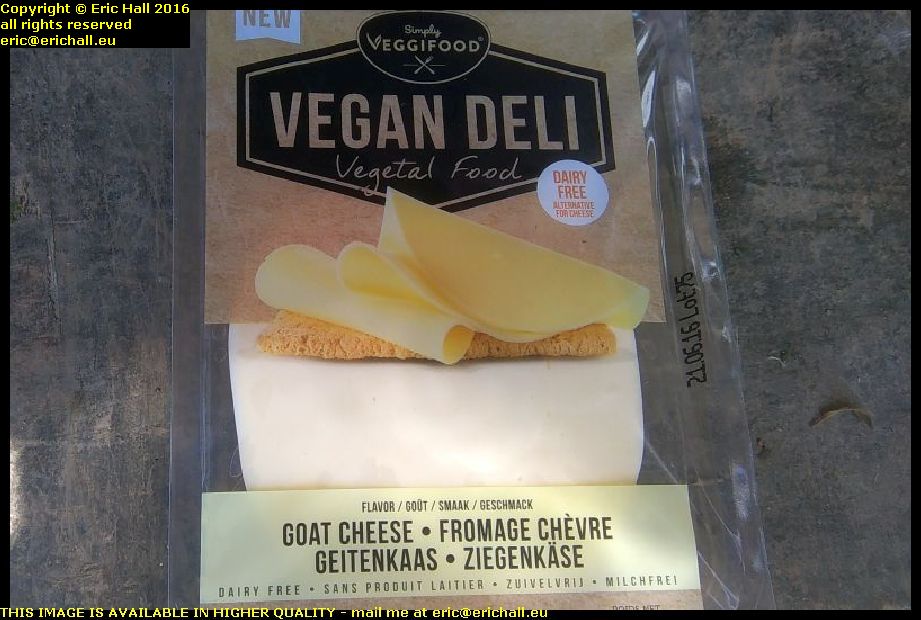 You may remember the other day that I was moaning that my vegan cheese had been “tidied away” from the fridge at Sint Pieters. I knew that I wouldn’t have time to go back to Brussels for more and how I’d be stuck for my next series of travels.

But no longer, because here in the Carrefour – a mainstream supermarket – they are now selling vegan cheese slices too, and at about two-thirds the price of anywhere else over here. I was equally as astonished by this.

Yes, things are definitely looking up in Belgium right now.

Back here, I’ve pushed on with updating the older bits of the blog. In a mad fit of enthusiasm I’ve done all of January 2011 and I’m stuck well into February. But I won’t be going much further than this for now because I’m leaving here tomorrow as you know. I’m going to have a check-up and then I’m hitting the road.

I did mention that I crashed out this afternoon, and I had a strange occurrence when I awoke. I had a dizzy spell and was staggering around in here for five minutes until I sat down and gathered my wits (it doesn’t take me very long these days).

And for tea, I had pasta and ratatouille followed by spicy loaf and soya cream for pudding. Now I’m off to bed and I shan’t say anything more because I don’t want to tempt fate.