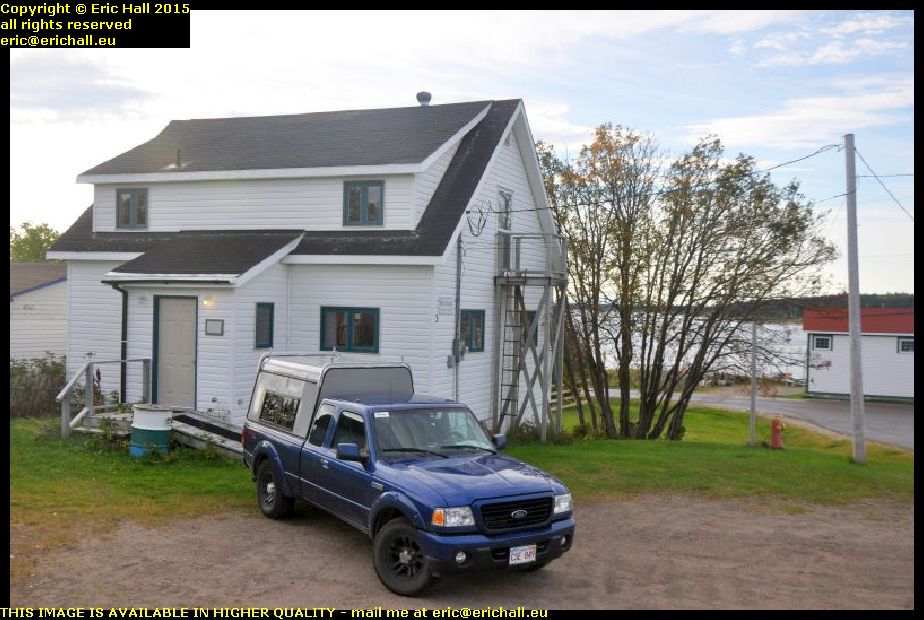 … that was last night in Wood Cottage. I had had a good shower and shave, done a machine-load of washing, had a nice tea (rice and vegetables seasoned with a packet of dried onion soup), spent some time on the internet, and then flat-out upstairs in a nice heated bedroom.

And you can tell how good a sleep I had had, for I was on my travels again. I’d been playing for a Welsh Premier League football team in a European competition and we were so unprepared that we had been playing for just 18 minutes and we were already 3-0 down. And then there was a call on the public address system for the stadium electrician, and so Terry had to leave the field to go to deal with the issue and so we were down to 10 men already.

But that did bring back memories of a match at Pionsat. We were in mid-game and the siren at the fire station sounded, so two of the players ran from the field (they were volunteer firemen) and went down to the station. And they came back later when the emergency was over and rejoined the game. 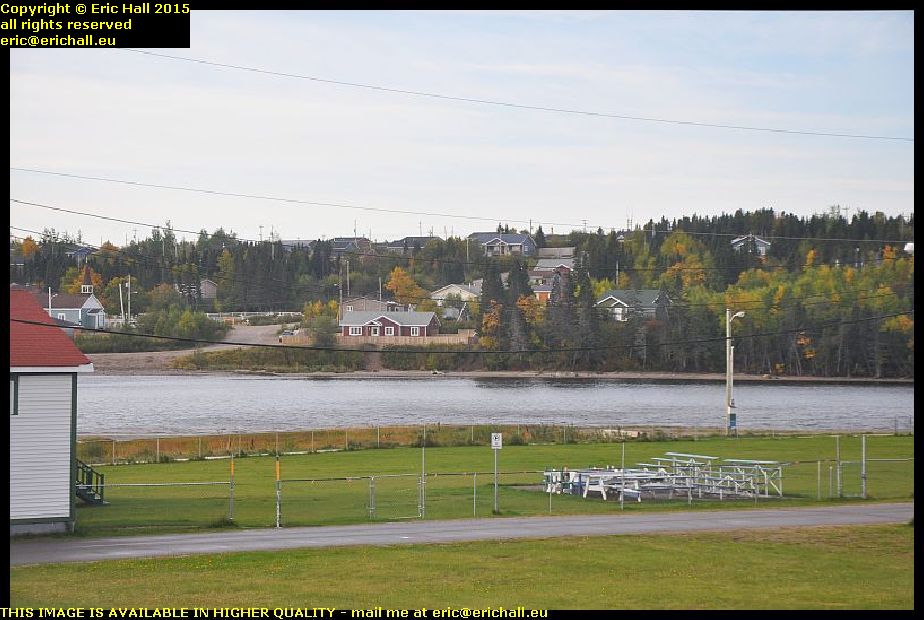 And while you admire the view of the Innu community’s settlement at Sheshatshiu across the river, let me tell you about the internet here at North West River.

North West River is a small settlement, the farthest north that it is possible to go by road in Labrador (and then only since about 1982), and across the river is a First Nation settlement. An outpost of civilisation it most certainly is, and yet the internet speed here is a good ten (and I do mean 10) times faster than the speed that I have at home.

I said that North West River has only been connected to the national highway system since about 1982 when the road bridge was built. Prior to that, we had the coastal boat that called here once a week. 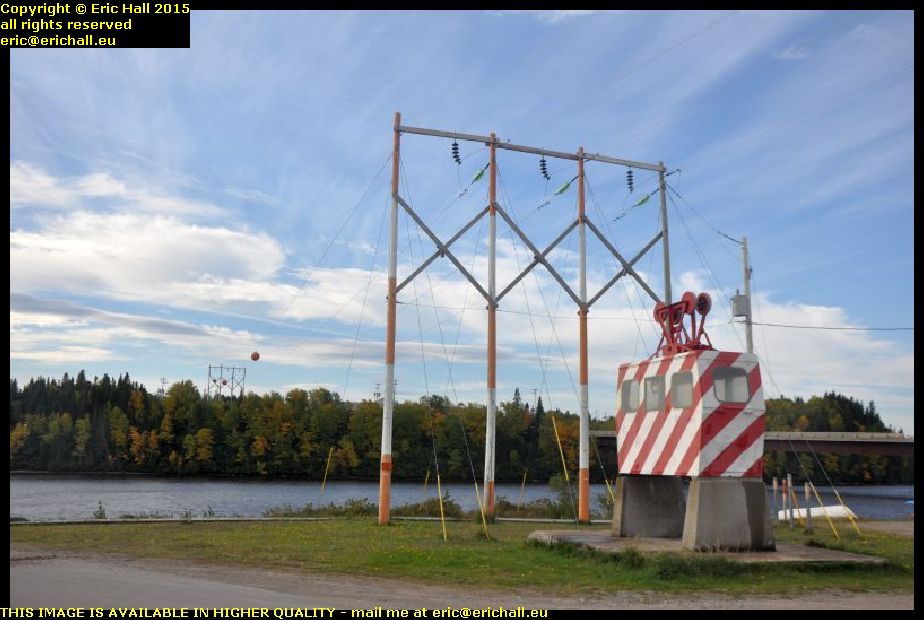 But North West River is actually on the north side of the river, and civilisation (in the name of Goose Bay and Happy Valley) is on the south. To cross the river to civilisation, you had your canoe in the summer and your ice-skates in winter but in the very early 1960s a cable-car from the UK was installed here and this was luxury!

When the bridge was opened, the chair lift became redundant. The town bought it for the symbolic dollar and it’s here on display on the site from which it used to operate. 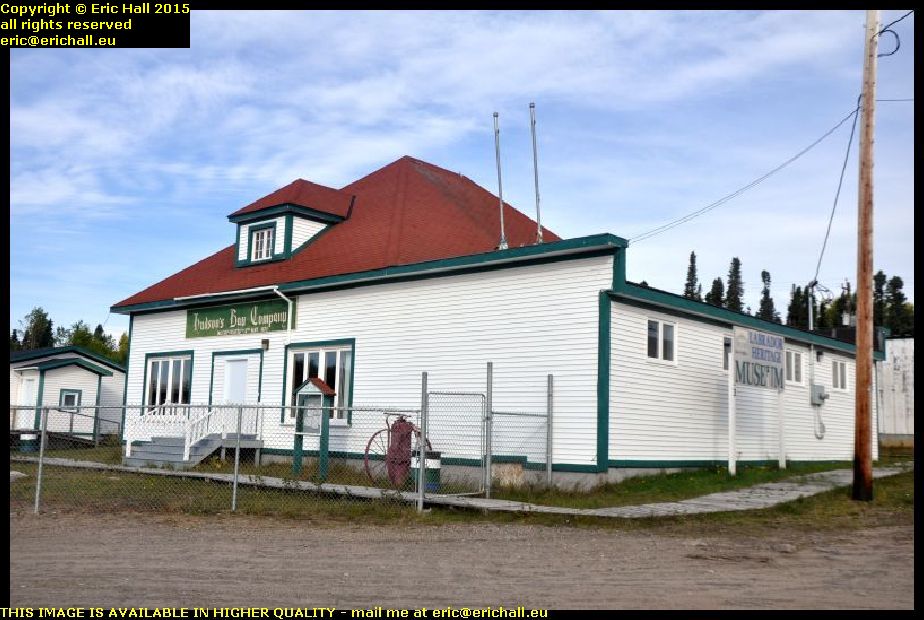 The site is next-door to the Labrador Heritage Museum, and that’s my next port of call.

The museum is situated in the old Hudsons Bay Trading Post and part of the exhibition is a fully-restored store inside, complete with many period products. The museum is officially closed as it’s now out of season but I’ve managed to blag my way in for a private tour. It wasn’t the Trading Post that interested me (although it did) but there was quite an exhibition about the boats that plied the coast here but also a big exhibition of artefacts from the Leonidas Hubbard and Mina Hubbard expeditions, including photos that Dillon Wallace had taken on his travels with Leonidas.

And I was right about the Labrador flag. The blue is the sea, the green is the forest and the white is the snow. 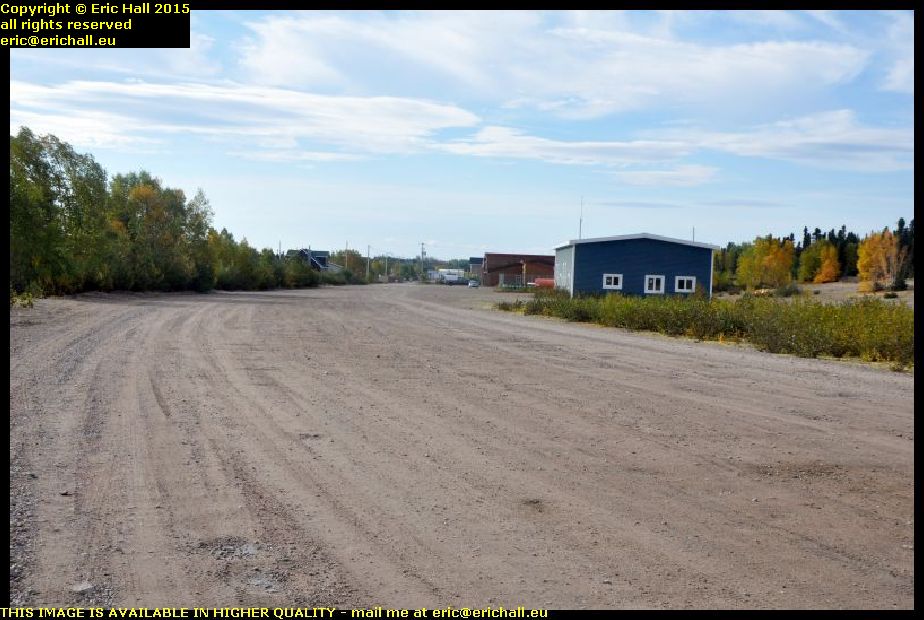 I spent a good couple of hours in the museum and then I went off for another wander around the town.

I’d noticed on an old map that I had seen that by the side of the dirt track out to the north, there was an airstrip indicated. It’s no longer used since the town has a road connection with the airport at Goose Bay, but I still thought it might be an interesting thing to try to find.

And here we are. This is the airstrip – now built-on in places and with some light industry in what I imagine would have been the airstrip building 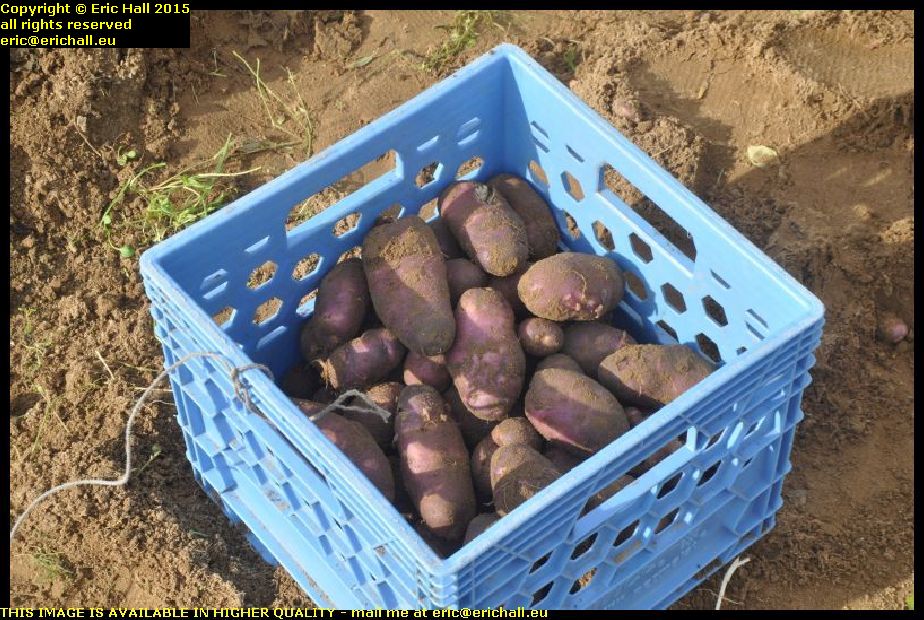 That wasn’t all the excitement out here either.

I’d seen some people way out in the distance looking as if they were working in a field, and so I walked right over there to talk to them. They are indeed working in the field, pulling up their crop of potatoes, and here’s the evidence. They reckon that this is a bad year for their spuds but I’d be happy with a crop like this.

They told me that carrots, cabbages, lettuce and a few other crops are grown here but people keep them near to their houses as they need quite a lot of tending. Potatoes don’t need much tending at all and so they can grow them out in what passes around here for fields. I reckon that it’s just sand but at least that will warm up quickly once the sun comes out, as anyone who has sat on a beach will tell you.

From here, I went for a drive around the Innu settlement at Sheshatshiu but I won’t be posting any photos of it here. In fact, I didn’t take any at all.

There’s a reason for that. Sheshatshiu is an artificial settlement built under the extremely controversial Government plan of regrouping all of the outlying Innu settlements into larger centres of population with a concentration of services. But unfortunately it’s destroyed the lifestyle of the Innu and given them nothing to replace it. Just like the settlement out at the Davis Inlet, Sheshatshiu is a hotbed of despair, destitution, alcoholism and drug abuse, and you can see the hopelessness everywhere.

This is something that I’ve seen in other First Nation and Native American settlements – the hopelessness.I would have thought that Europeans would have learnt to leave the native communities alone and let their way of life evolve at their own pace.

By Europeans, by the way, I mean people of European origin, whether or not they are 10th Generation Canadians. 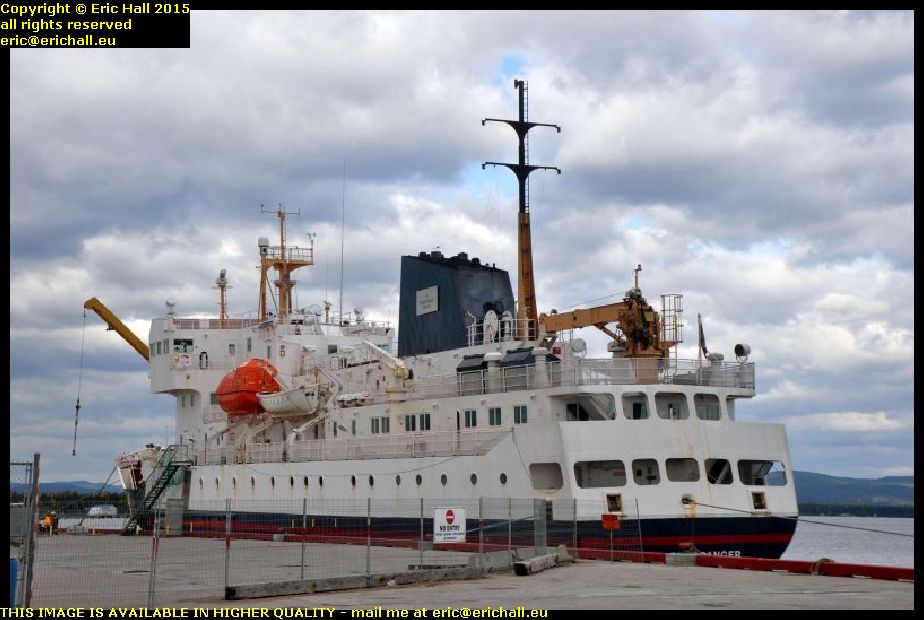 Talking of First Nation settlements, there is about half a dozen of them further up the northern Labrador coast (and that’s a lot less that there used to be before the Government’s controversial compulsory resettlement policy) and the only access that they have is by sea.

The Northern Ranger is the ship that carries out the service and calls at each of the settlements, making the tour once a week. And here she is, at the quayside in Goose Bay loading up for – I imagine – Cartwright and the enigmatically-named Black Tickle. 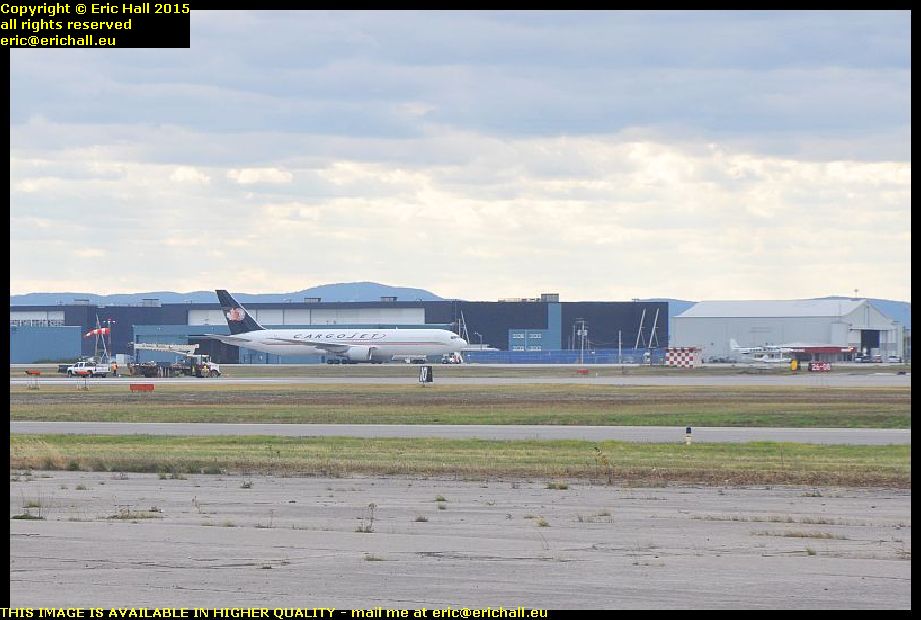 There was a great deal of activity at the Goose Bay airport too. A couple of helicopters were taking off and landing, there was a whole stream of light aircraft coming in to land, and there was a cargo plane over there at the terminal.

It’s all go since Valard began all of the work on the hydro plant at the Muskrat Falls – it’s brought piles of changes to the area, but it’s still a far cry from the days when this was an important port-of-call on the Atlantic Ferry in World War II and subsequently a major NATO base during the Cold War. 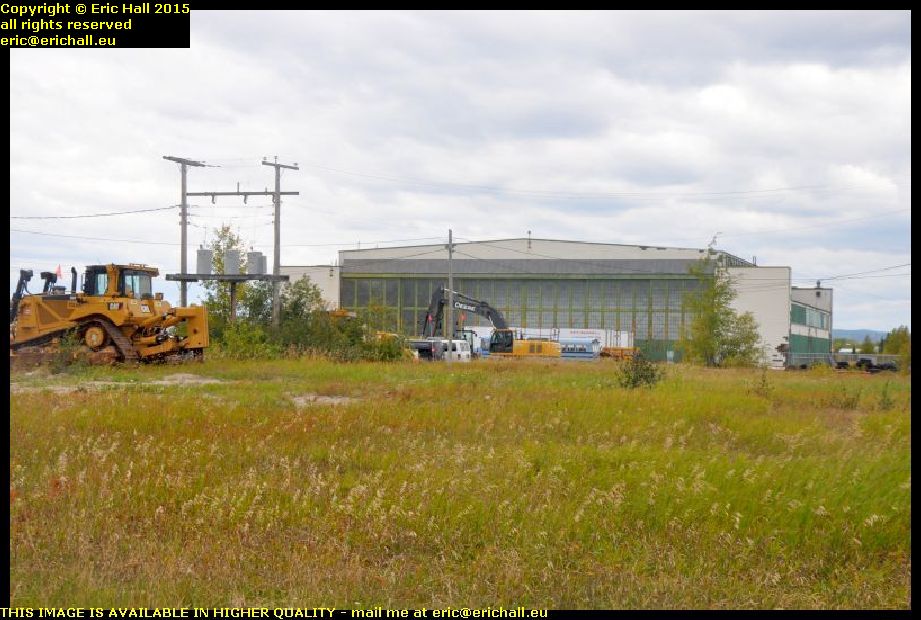 I came here in 2010 and the place really was derelict in those days but now it’s being tidied up a bit.

The hangars were in a desperate state in those days but now they seem to be in use for light industry. And talking of Valard and the construction works here, in one of the hangars is a company that specialises in buying, selling and repairing heavy plant and machinery. And I bet that there’s a great deal of that needing repair too, seeing the amount of work that they do and the conditions in which they are doing it. 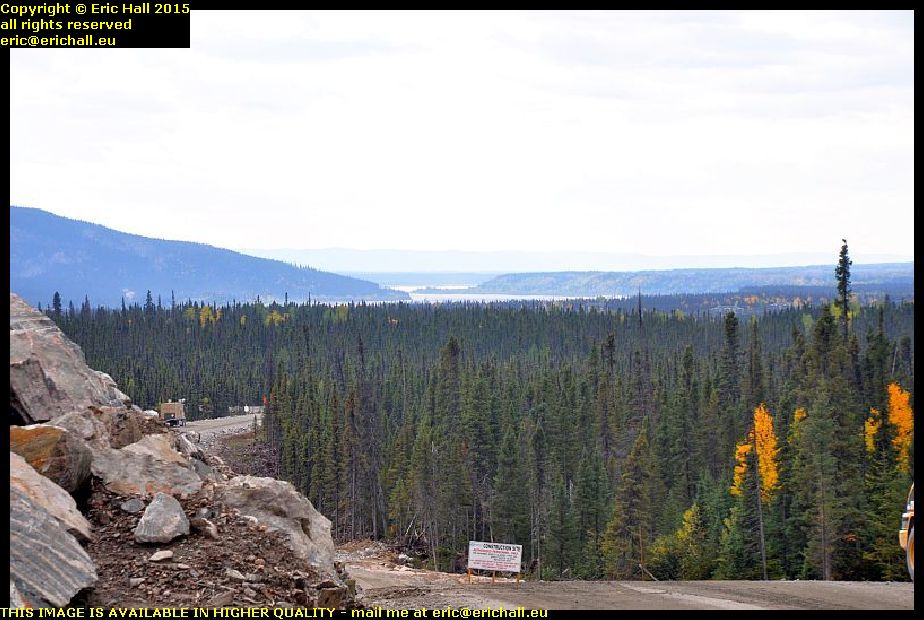 I fuelled up Strider again (you need to fuel up at every opportunity out here) and set off for Labrador City after that.

And while you can no longer go to visit the Muskrat Falls due to all of the construction, the construction work has opened up some astonishing vistas that were no longer visible previously. This is one of them – you wouldn’t have seen this a few years ago. And it’s not the only one either. There are plenty of them and the whole scenery is changing. 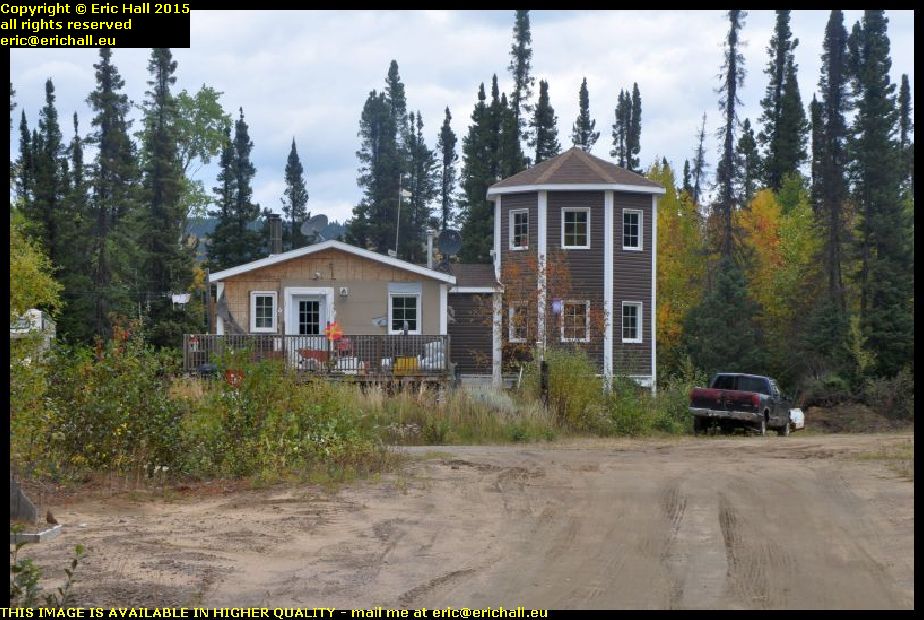 It’s not only the Muskrat Falls that is undergoing major construction work. I’ve been noticing dozens and dozens of new cabins and homes springing up all along the Trans Labrador Highway that were certainly not there previously.

Some of them are quite banal as you might expect, but one or two of them have been built by people with a sense of the unusual and the eccentric. This home has quite fascinated me and I could quite happily live in a house like this – especially the tower bit. I love that. 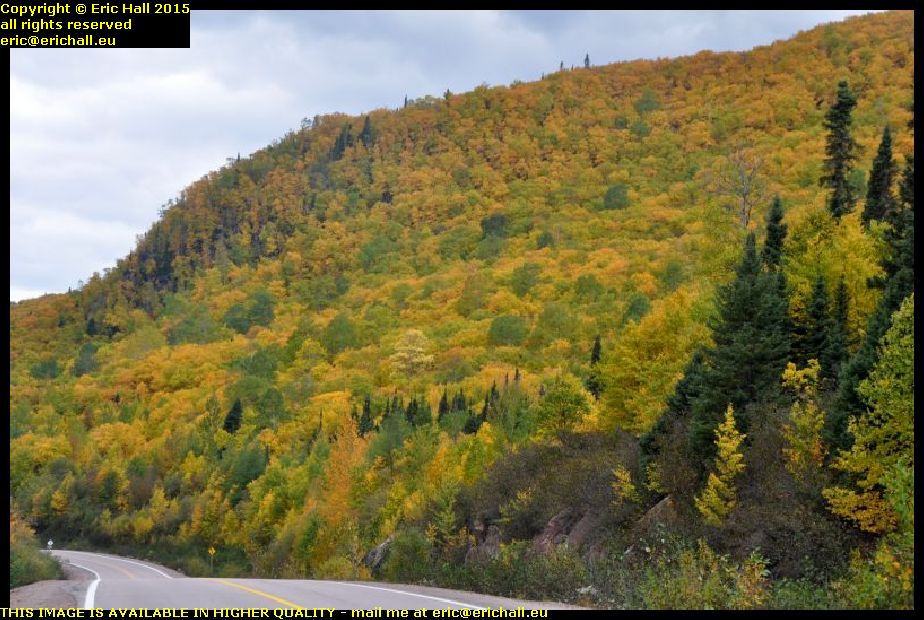 One thing that I do like about Labrador at this time of the year is the beautiful autumn colours.

The northern side of the valley catches the sun and is quite sheltered from the wind and so there are plenty of deciduous trees that grow up there. And here, there’s a spectacular view of a deciduous forest and as the colours change for the autumn, they are magnificent. I could sit and look at these colours for ever. 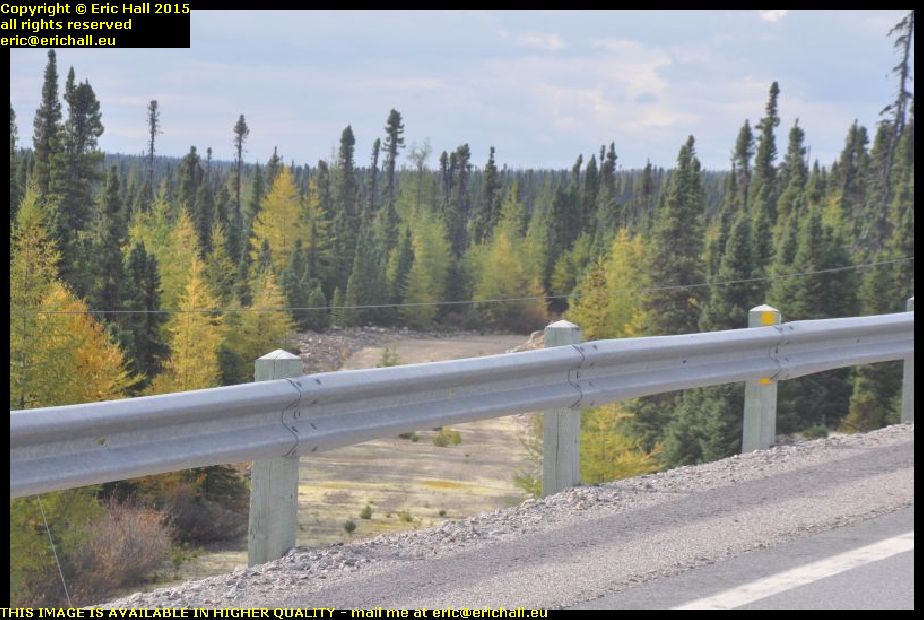 When I came by up here in 2010 the road was thoroughly dreadful and it took hours to cover just 150 kilometres. Today though, it’s all different and we have a really modern and quick black-top highway so that we can cover the ground as fast as we like (subject to the 80 kph speed limit of course).

Just here, you can see a sample of the old road along which we used to have to travel and you won’t be surprised that it took so long to cover the ground. However, I am glad that I did the route when it was still a challenge and a struggle. It’s nothing like that now of course.

By economising on the performance of Strider, I’m managing to stretch out the fuel consumption a little. And so I didn’t call at Churchill Falls to fuel up. Strider won’t do the 550 kilometres to Labrador City of course, but I still have 40 litres in cans in the back. And so I’m heading to the sheltered little rest area by the Churchill Falls to spend the night 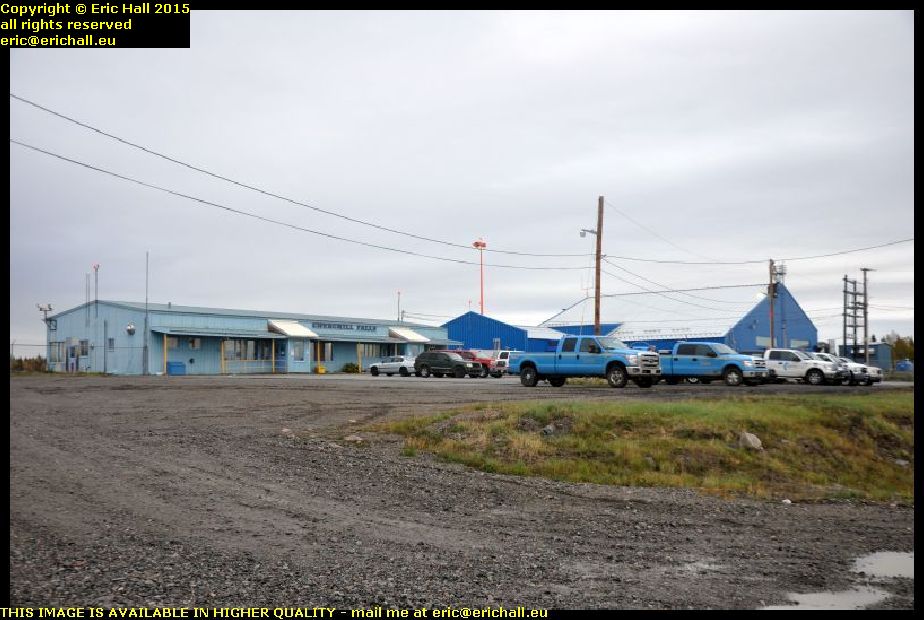 But talking of Valard and construction and the like, this is Churchill Falls airport and it never ever looked like this.

There’s been a considerable amount of rebuilding and expansion that’s gone on here this last year or so, and you can see who are the major customers here, judging by the amount of Valard vehicles parked in the car park.

And Valard vehicles are everywhere – at one point a stream of 5 Valard pick-ups passed me in the opposite direction and at almost every track off into the forest there are one or two parked up.

Now, I’m on the rest area. I’ve put my 20 litres of fuel in and I’ve settled down in the back of Strider, listening to the pouring rain beating down upon the insulation on the roof. I’m going to crawl into my sleeping bag in a minute and watch a film. And if I fall asleep during the film, then ask me if I care.