… o’ mice an’ men gang aft a-gley, as we all know. And none more so that when I’m involved.

I went round today to pick up Plan B – the camper shell that I was having specially built for me, only to find that it wasn’t ready and wouldn’t be for another week. And that is of absolutely no use to me as this time next week I’ll be in Fredericton.

Mind you, I wasn’t that disappointed because first of all, I had suspected something pretty much like this – that it wouldn’t be done. I dunno – I had that kind of funny feeling and I’ve had it ever since. And secondly, I’d been having another thought anyway that maybe I had been too hasty in making a decision.

But as it turned out, the place where I’d been to also spends its time manufacturing aluminium work-type truck caps and that’s much more like it. And not only that, They can go for a taller height (32 inches instead of 29 inches) and you’ve no idea the difference that three inches can make, as the actress once famously said to the Bishop.

Anyway, having made the guy there feel suitably guilty, he’s going to build me on specially for Saturday. At least – he better had or else my long-suffering patience and good humour would disappear on the spot.

And I was in fact lucky that I still had any patience and good humour left. I didn’t have a very good sleep (not being able to fit the bed into the tent didn’t help much – I had to empty the load bed of Strider and that all needed to be under cover) and so I wasn’t in the best of humour to start with. But at least I managed to find the saucepan and the coffee so that I could brew up.

Now yesterday, I told you that there was no railway line to Burlington. In fact, I was being rather economical with the truth. 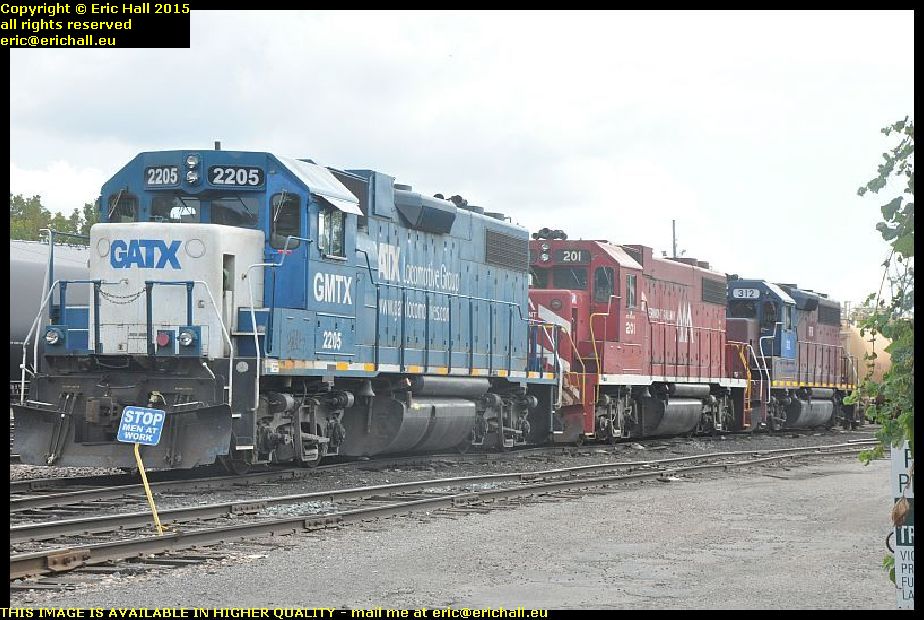 Further enquiry and exploration revealed that there is indeed a railway line here and if you need any proof, here are a few of the locomotives that are stabled in the goods yard.

However, I have found out that Burlington is the headquarters of Ben and Jerry’s, so seeing all of the liquid kaolin slurry here has put me right off ice-cream.

The passenger rail service has long gone (although there’s talk of restarting it some time) and the abandoned railway here in front of me as I type is the old line to Alburgh, that lost its passenger service as long ago as 1948, so I was told. 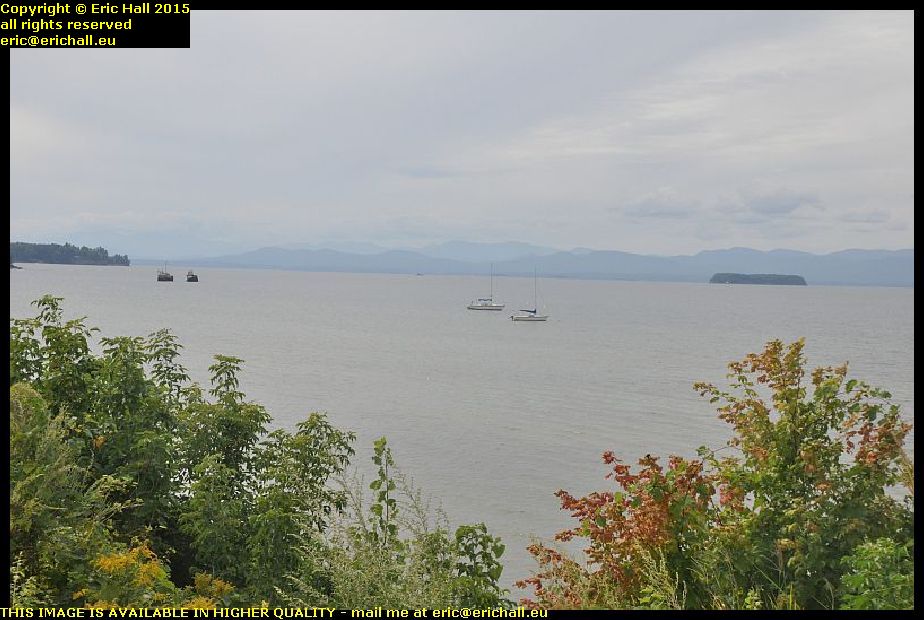 South of the town on an industrial estate is a small headland that overlooks Lake Champlain, and so this is where I went for lunch.

It was quite impressive up here and while the weather might not have been the best, it was still a quite pleasant day for idly sitting around for an hour or so and doing not very much.

And then I went off for my disappointing visit.

But as I said, it isn’t all doom and gloom. Round the corner was a charity shop and I bought a rug, almost exactly the right size for Strider’s floor, for just $5:00. And the Walmart down the road came up with a cheap doormat and one or two other bits and pieces. If ever I do get something organised, it will be the prettiest place in the universe.

On the way back, as it was getting dark, I drove past the High School sports stadium just as two teams were taking the field. Thinking it might be something interesting like a football or a gridiron game, I went for a look but it was in fact a girls hockey match between Burlington High School Seahorses and Champlain Valley High School Redhawks.

It was quite apparent from the warm-up that the Redhawks were the most disciplined and better-organised team, and they even had the team “hypnotism” session that you often see at the end of a yoga session.

And that was how the match went. The first 15 minutes were spent entirely in the Seahorses semi-circle and I did at one point think that the only time that the ball would end up at the other end would be after the teams had changed ends at half-time. One-way traffic was not the word.

Nevertheless, the Seahorses’ goal led a charmed life and how the score ended up just 2-0 for the Redhawks instead of the cricket score that I was expecting remains one of those little mysteries.

What didn’t help matters, from the Seahorses point of view, was that the only times that they threatened on the attack was down the right wing, with a combined attack of the n°17, playing right midfield and who in my mind was the most impressive Seahorse on the field, and the girl playing right-wing whose number I didn’t notice. When they were working together they usually managed to produce something threatening and interesting, even if the rest of the girls couldn’t quite manage to get on the end of the ball. But in one of the weirdest coaching decisions that I’ve seen for quite a while (and regular readers of this rubbish will recall that we have seen a few in our time at various sports) the Seahorses coach substituted the n°17 after about 40 minutes (there were two 30-minute halves) and the Seahorses attack, such as it was, melted away after that.

As for the Redhawks, they were by far the better team. Quicker, fitter (a couple of times, a Seahorse or two were caught upfield out of position and out of breath), more organised, more disciplined and more powerful. And the best player on the best team was the Redhawks right-back – a little slip of a girl wearing n°17. She was playing sweeper on the right, right on the edge of the Redhawks half-circle, but I’ve never seen anything so small move so quickly. She could run all the way up to the half-way line to intercept a loose ball and play it forward before her opponent, who had 30 yards on her, had even made up her mind what to do.

It’s not my sport of course, field hockey, even though I had a girlfriend (Rohina) who played on the school 1st XI back in those days, but I can recognise a good team and a good player and good tactics whenever I see them.

All in all, a most enjoyable night in quite a large partisan crowd – helped of course by the fact that for the first 20 minutes at least I had some convivial company – a guy from a neighbouring town who had dropped by with his wife and daughter. In fact, he was most interested in life in Europe, energy conservation, all that kind of thing, and we had a really good talk until his daughter started to become cold and wanted to go.

And no photos of the match, unfortunately. As you know, in the USA, cameras are not permitted at many places where children are present. Personally, I’m surprised that they don’t wrap them in Bourhkas myself.

And back here the camp site has been invaded by Roadtrek campers. It seems that they are having some kind of convention here, singing around the campfire and stuff like that (but I’ve no idea what the occupants will be doing of course). That’s going to be another night when I won’t have any sleep. 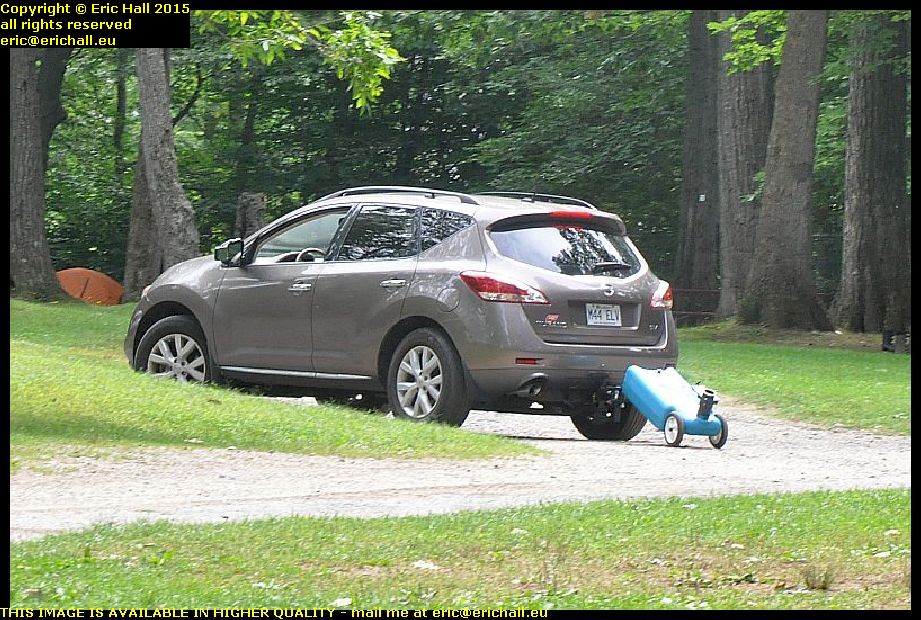 And talking of campers, look at this. Is this not the epitome of laziness?

For those on pitches that don’t have water taps (and private sewage hook-ups) the public conveniences are in no case more than 50 metres away. But this here is someone who has a wheeled water container so he can drag it along like one does with a shopping trolley, but tows it behind his car – for all of a maximum if 50 metres.

You can’t make up anything like this, which is why I chose to prohotgraph it. But it sums up North America completely (yes, I have noticed that the vehicle has an Ontario number plate).