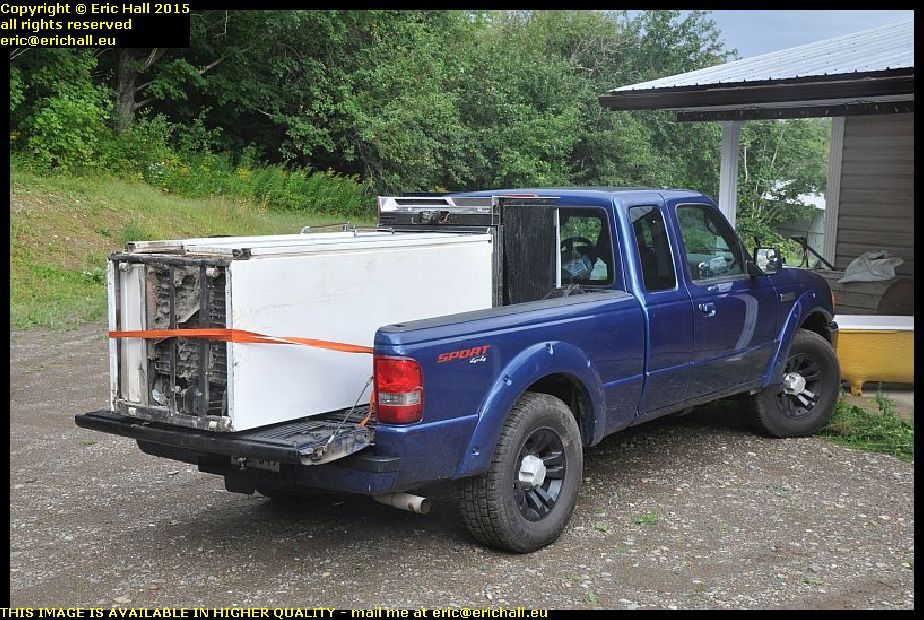 … all loaded up with a huge domestic fridge and a big cooker, and in a few minutes we are off to Sharp’s, the metal place just outside Woodstock.

I’m taking my leave of Darren, Rachel and family and heading off into the hills. I mean – I’ve been here 10 days and that’s not like me at all to put down roots like this.

At Sharps, there was nearly a lot more metal hauled into the yard as I failed to see a dark purple car against the dark vegetation background as I pulled out to go across the road. That was rather embarrassing, to say the least, especially as I had something of an audience watching me.

Anyway, having done that, I went down the road and to the border with Great Satan at Houlton. Crossing into the USA there took ages with the queue of traffic (but nothing like what it took to get into Canada the other week) and just for a change, every single one of the border guards was friendly, cheerful and helpful. If all border crossings could be like this one, travelling would be a lot less stressful.

However, just to prove that little of the underlying spirit of the USA has changed very little, while I was there, four people were chosen from the queue to receive closer attention

Still the same old stereotypes, so it seems. But as I said, even though I was selected for closer attention, it wasn’t a stressful experience by any means – just a friendly chat.

In Houlton, I struck lucky yet again at Marden’s and it made me wish that I hadn’t spent that monay at Canadian Tire the other day because they had everything that I needed there and at half the price too. But this is the thing with Marden’s – their stock is very much of the moment. It’s all bankruptcy, liquidations, fire sale stuff and it comes and goes. You can’t ever rely on them for having anything.

I fuelled up Strider as well, and I’ve come to the conclusion that his fuel consumption isn’t as bad as I was fearing. I let him run quite empty, to a rather depressing 425kms (not enough for Labrador) but to refill, it took 15.4 US gallons – about 55 litres. It’s still not very good, but at least I know what to expect. 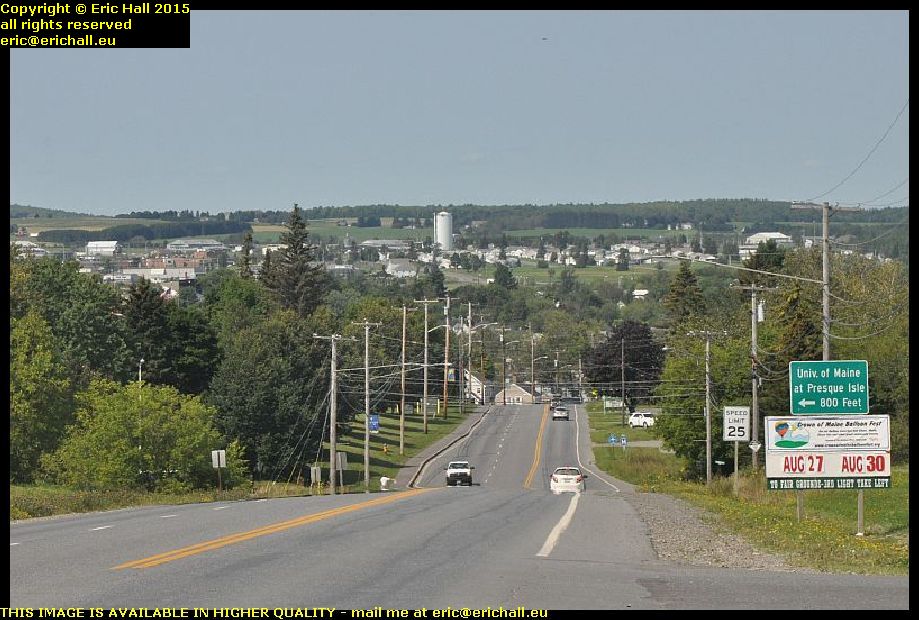 Consequently, at the Walmart at Presque Ile, where I went next, I picked up a second 20-litre fuel container, just to be on the safe side.

And here, I struck lucky too. 2-tonne trolley jacks on sale at just $18:86. Anyone who has tried to jack up a vehicle on a dirt road with a sill jack (as we did in 2012 out in northern Quebec) will know the value of having decent tools and equipment for tyre changing. I could have done that job in 20 minutes, not three hours, with decent equipment.

Back on the road again, I didn’t go far. Just as far as Bridgewater in fact 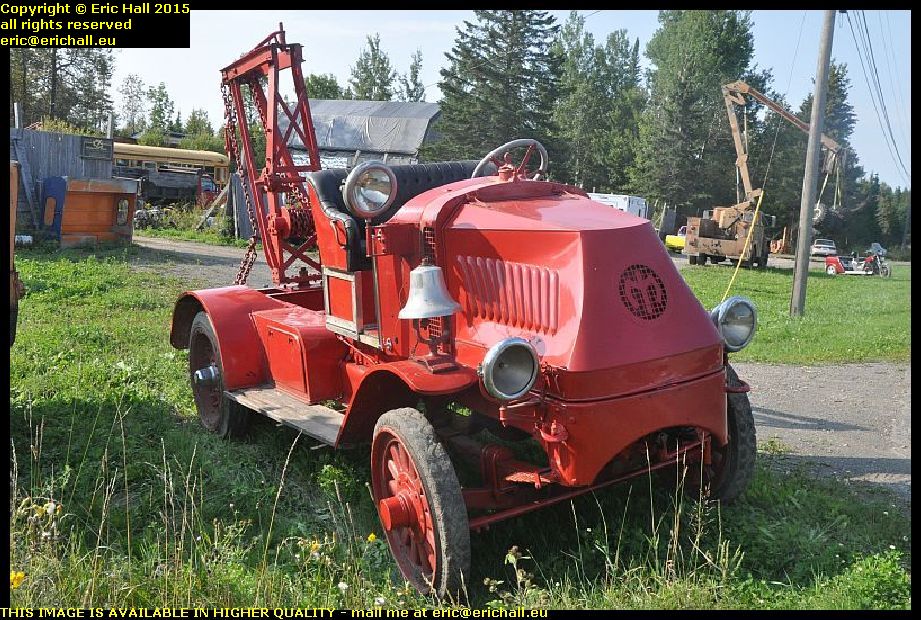 This is a 1919 Mack fire truck, “used” here in Maine at a fire depot until 1960. Then it was converted to a tow truck but was never used and was simply laid up, until the present owner acquired it.

And I said “used” in inverted commas, because it’s done a verified 1900 miles since new. 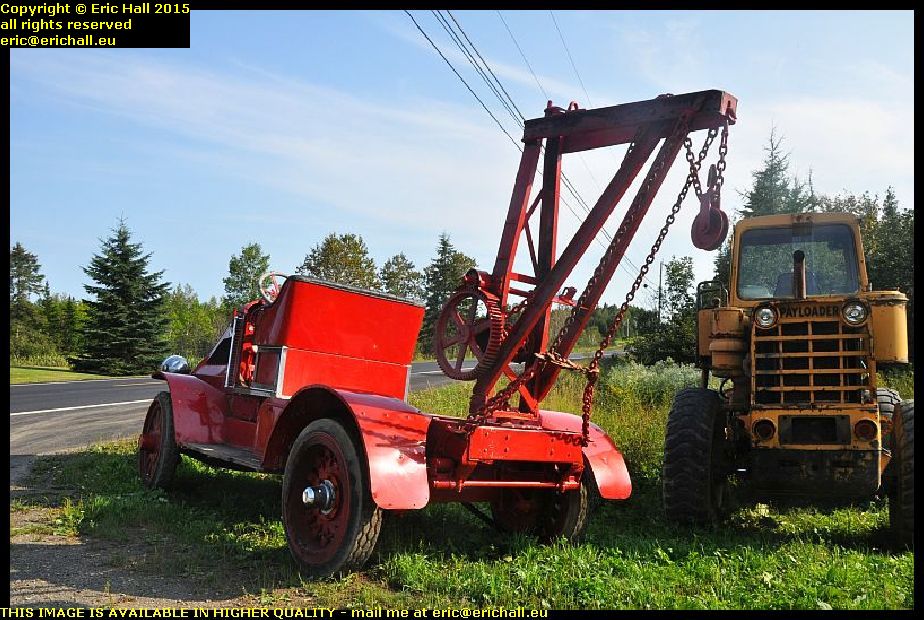 Never mind shaft drive, this is chain-drive – in fact twin chain drive – as you can see.

It’s a 4-cylinder engine, displacing 600 cubic inches, and has a belt-drive clutch, which is bound to make for exciting motoring on the modern highway. And it does run too – in fact the owner takes it out to park it on the verge every morning and then brings it back inside at night.

You all know where this is though – it’s at the place where they have the scrap Rolls-Royce that has featured on these pages in the past. And he also has a 1925 Dodge Brothers (NOT a Dodge) convertible, a 1924 Renault, a 1910 Panhard-Levassor (and we spent ages discussing the merits and otherwise of sleeve-valve engines) and, would you believe, a Kawasaki motorbike with an Isuzu 4-cylinder 1700cc diesel engine fitted.

I couldn’t take a photo of it because they were still “work in progress”, but I’ll be back here next year to see how he’s getting on.

Not I’m in a motel just off the highway going south. I’ve had a shower, washed my clothes, and had beans and chips for tea. Now I’m ready for anything.