… “on many occasions too” – ed … that if I were to live around here, the vehicle that I would choose would be an old Land Rover. 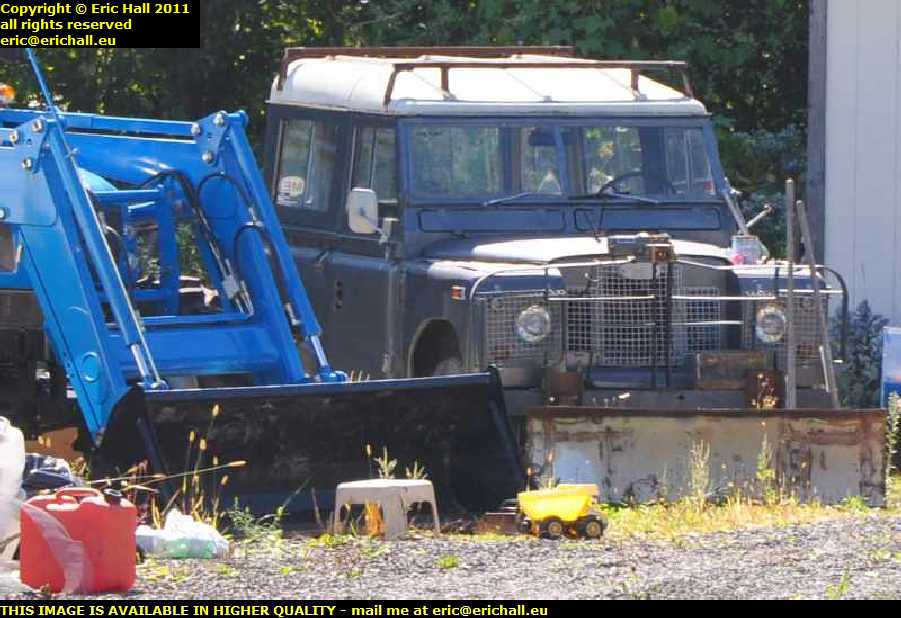 And not just any old Land Rover either. Not a Defender and not a 90 or 110 either but a “series” Land Rover with leaf springs and other prehistoric fittings that I find so attractive.

And sure enough, here we are. A Series Land Rover (I can’t tell if it’s a 2A or a 3 but at a guess I would say that it’s a Series 3) complete with snowplough parked up at the back of someone’s house. A new galvanised chassis underneath that and a little tidying-up of the bodywork and you would have something that would last for 100 years. 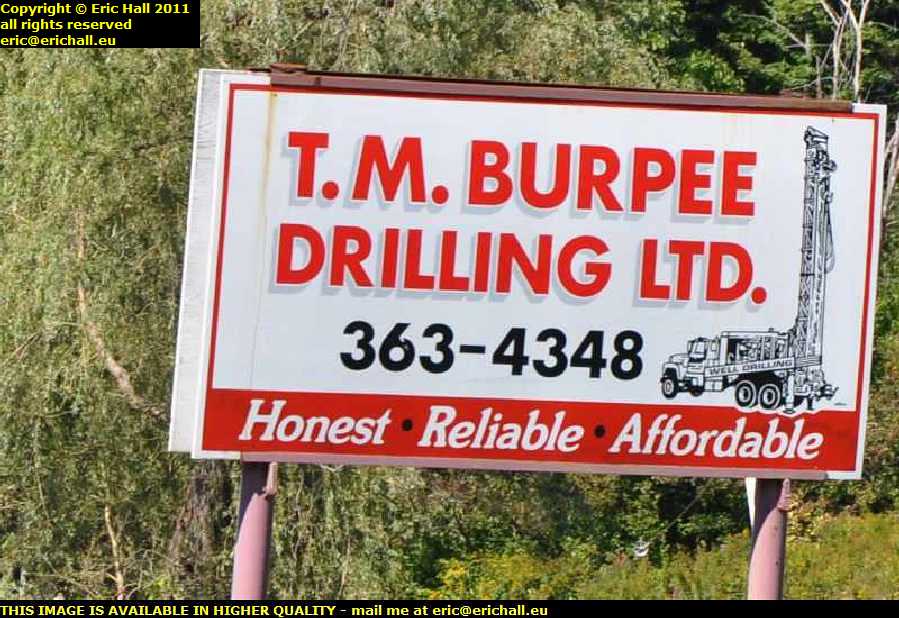 Here’s an interesting sign. I’ve also found a Burpee Drive and a few other Burpee things, so it might be a common local surname.

My interest in this name is that there was a “Burpee” – in fact, a Pilot Officer Lewis Burpee of the Royal Canadian Air Force who flew Lancaster ED-865 “AJ-S” on Operation Chastise “the Dambusters Raid” and was lost with all of his crew near the Gilze-Rijen night-fighter airfield in the Netherlands

But I’m getting ahead of myself here. There are a couple of garage sales around here and I’ve stocked up on a couple of tools and a couple of books, including one on how to build a typical Canadian wooden building. I’m really making progress here 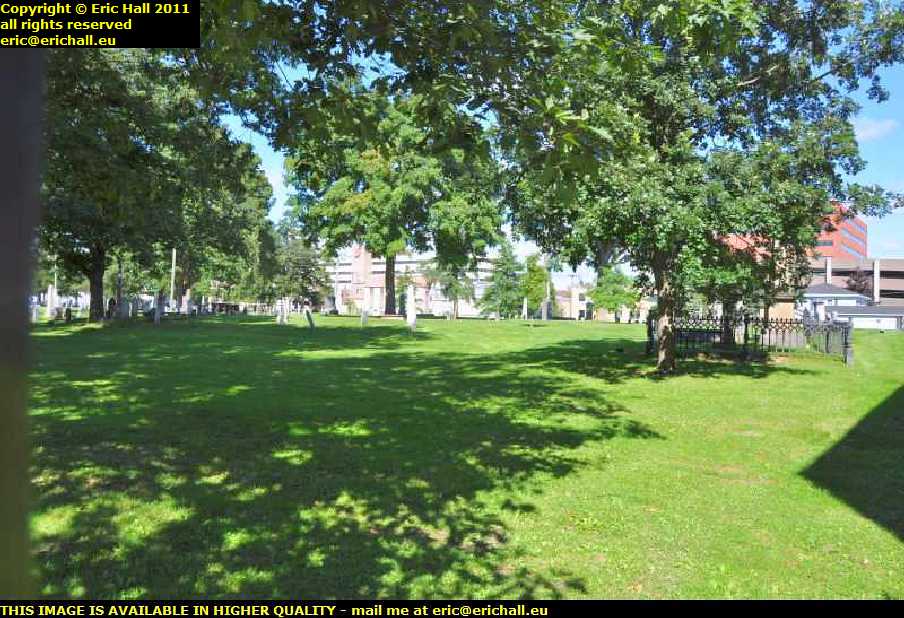 Parking is difficult here on Saturdays but I find a place near the Historic Burial Ground of Fredericton. This is where you will find the early pioneer settlers, United Empire Loyalists, civic leaders, visiting provincial dignitaries and the like.

And also the unmarked graves, just in front of me, of British soldiers who died while serving at the barracks in the city between 1784 and 1869 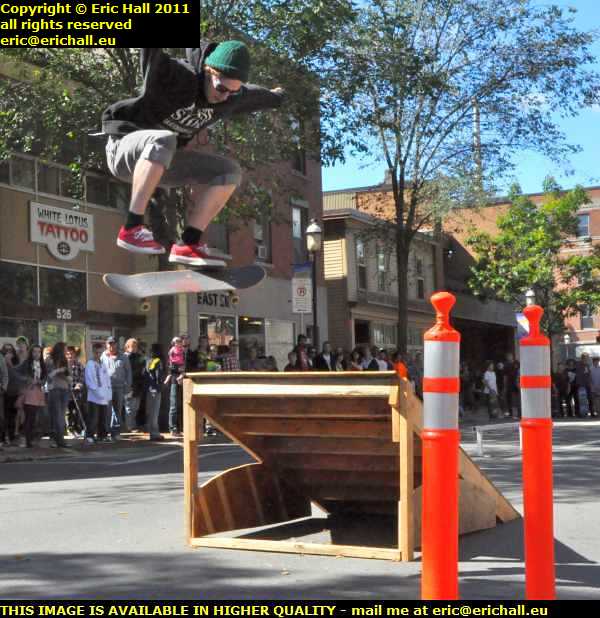 I went off into the town to see what was happening. And with Queen Street being closed off to traffic, we have a pile of street entertainers – all kinds of things happening.

One thing was some kind of informal skateboarding competition with teenagers leaping over a few jumps and, a little further down the street, an old car. You can see that there was quite a crowd watching the entertainment, and it certainly was entertaining.

I had a chat with a couple of the skateboarders later and, unfortunately, I can’t find the notes that I took. Did I mention that the batteries went flat in my dictaphone and I had left the spares in the Dodge?

And going all the way back to the Dodge to pick up my spare batteries, I had the shock of my life. 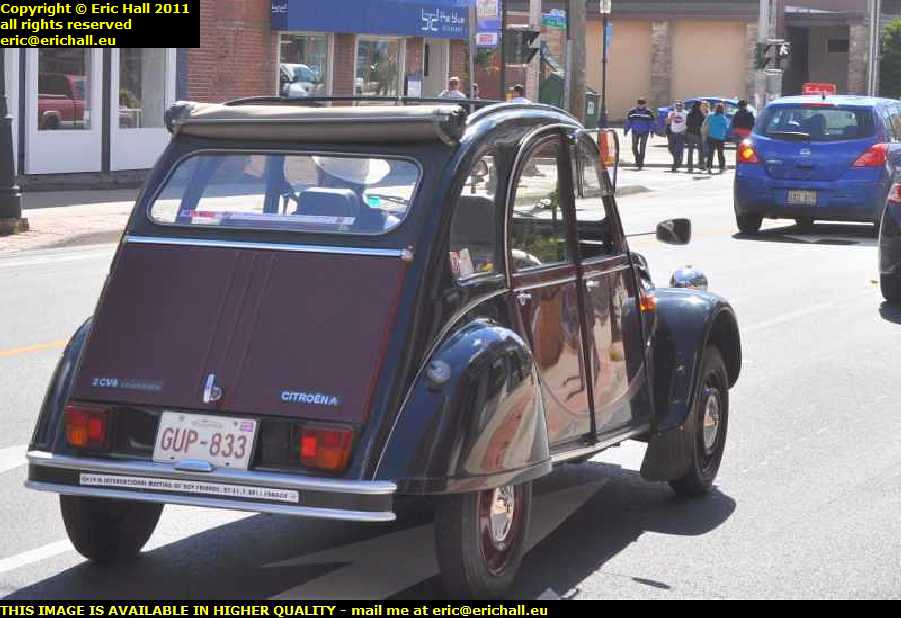 Despite being the symbol of the trendy hippy-set of Europe in the 1970s and 80s, the 2CV had a dreadful reputation for exhaust emissions and I never expected to see one on the roads in North America.

However a few were actually sold in North America and whatever reached Canada didn’t last long due to the wafer-thin bodywork being destroyed by the amount of salt on the roads in winter. So this is quite a rarity. 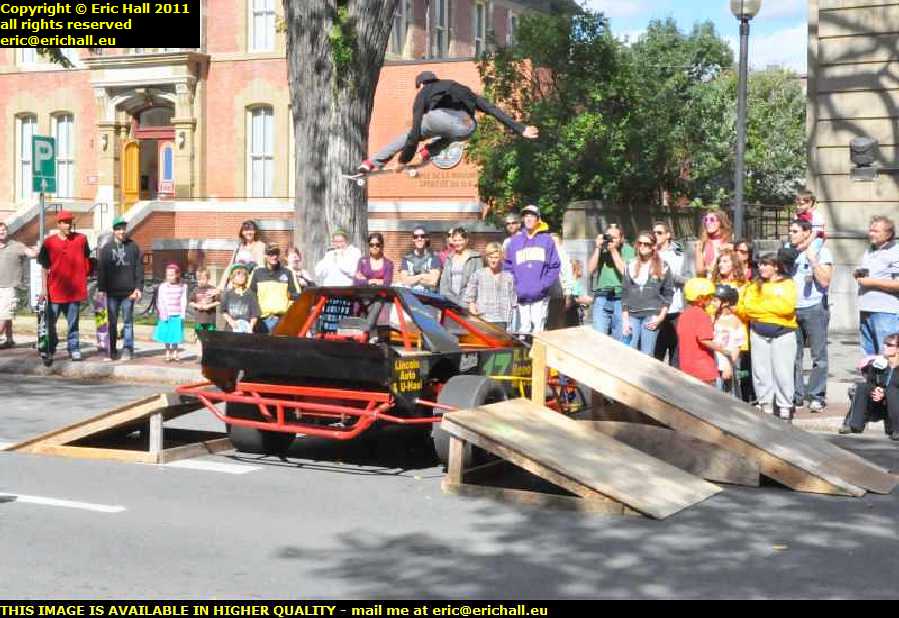 I can now carry on with my wandering around the street entertainers down Queen Street and end up with the skateboarders again who seem to have moved on to have a go at leaping over the car that I mentioned earlier.

Many of the skateboarders don’t seem to be able to manage the leap, but credit to them because I wouldn’t want to do it, but this guy here does it in spades, so chapeau to him. 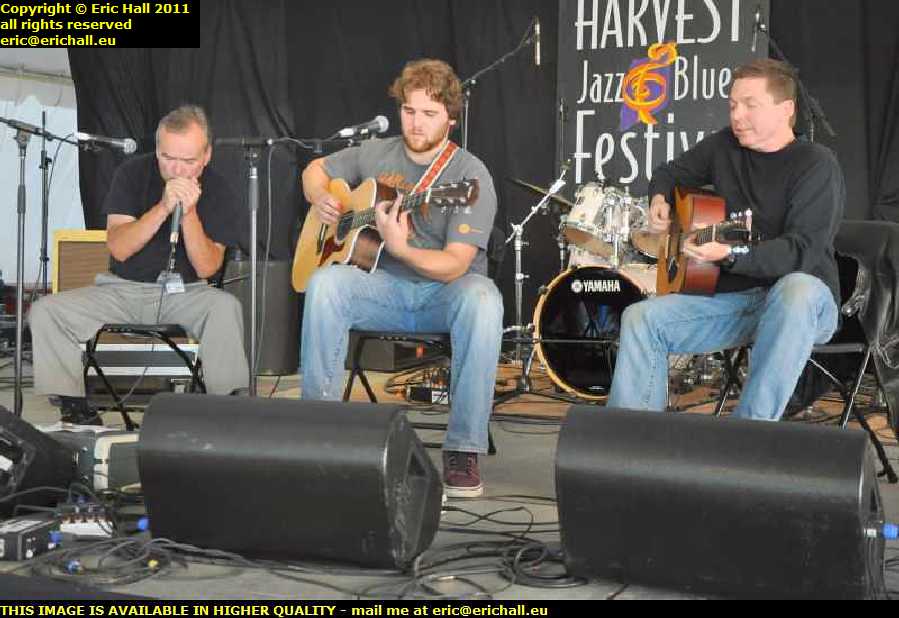 By now the music has started and I’m drawn to the marquee un the Barracks Square to see what’s going on.

This is someone, or someones, by the name of Double Dutch Hutch who are competing in the Galaxie Rising Stars competition with the prize of playing at an international blues competition in Memphis, Tennessee in the New Year. 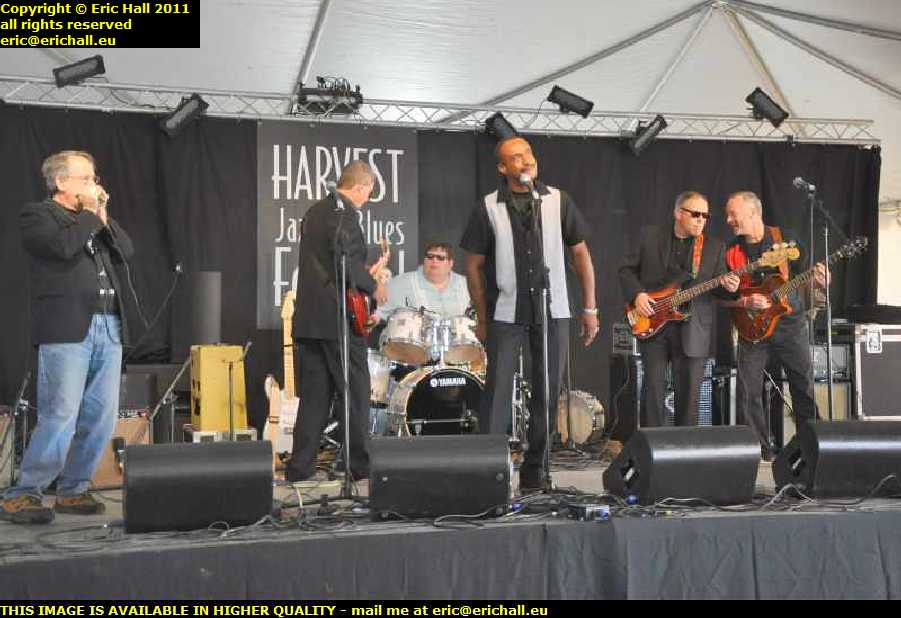 Another band that is competing in this Galaxie Rising Stars competition is the George Street Blues Project, whom we met the other day … “yesterday, in fact” – ed … in the open air at Officers Square.

Highlight of their show was definitely a spirited rendition of the old William Bell number “Born Under A Bad Sign”, which echoed many of the lyrics written by Lightnin’ Slim in 1954 in “Bad Luck Blues” and made famous by Cream on Wheels Of Fire

and which went down well with the crowd. 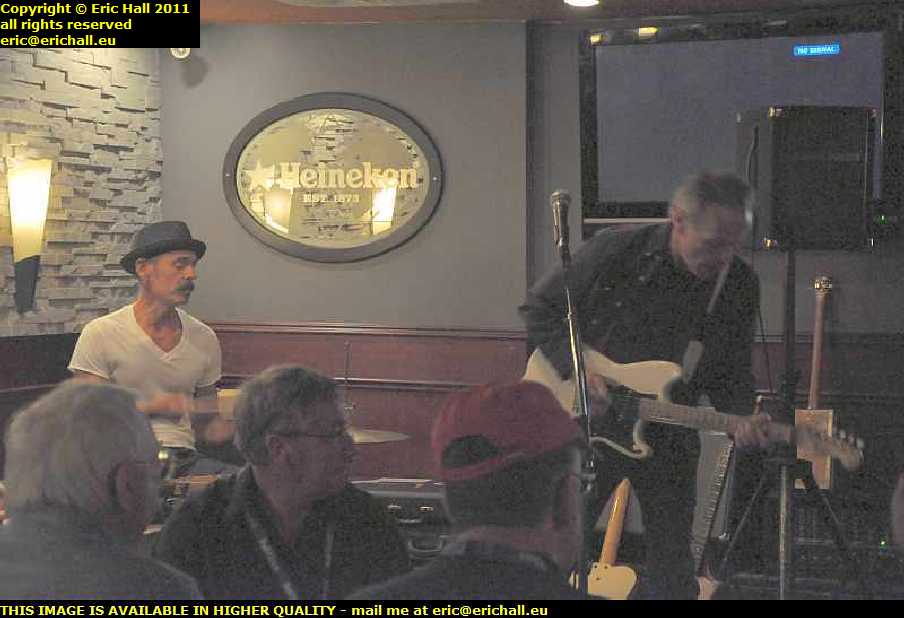 Having seen these before I went off for a wander and there at the back of a dimly-lit “Snooty Fox” I encountered Morgan Davis and Geoff Arsenault.

I had a chat to Morgan afterwards. It appears that he’s originally from Detroit and came to Canada in 1968. Probably too young to have been one of the people who found peace on Canadian rather than Swedish ground

, and now he lives in Nova Scotia. And quite right too.

On my way to catch Taj Mahal I ended up chatting to quite a few different people, including a guy who was a sales rep for a Fibre-Optic system. He had quite a keen interest in all kinds of Renewable Energy and in the social situation in the UK – such as it is. 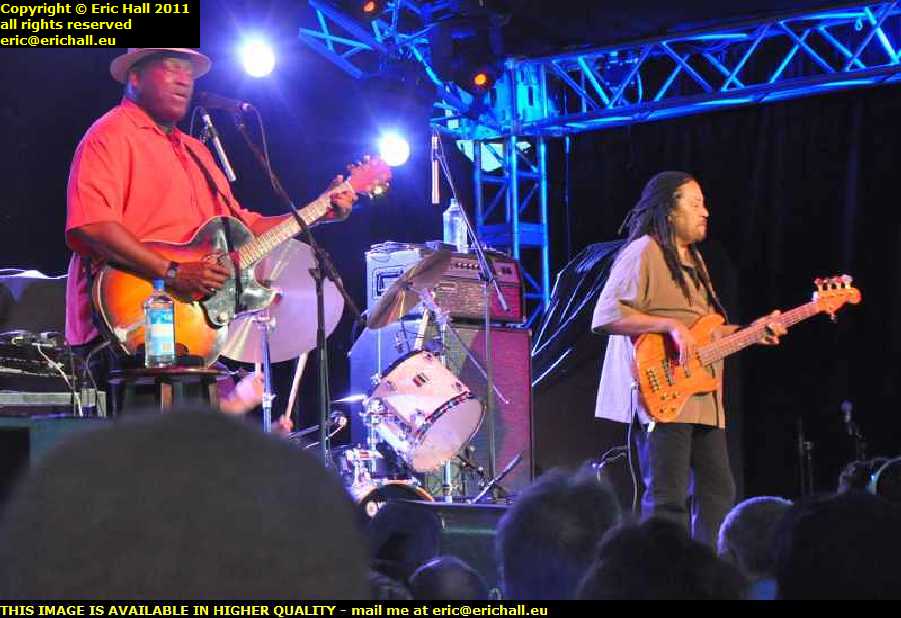 This time, armed with a media pass, I could take photos of Taj Mahal, and so I did, much to the chagrin of a security guard who made a spirited grab for my camera until he saw my media pass.

I’ve never seen anyone go so quickly into reverse than I did just then. It was all rather amusing. 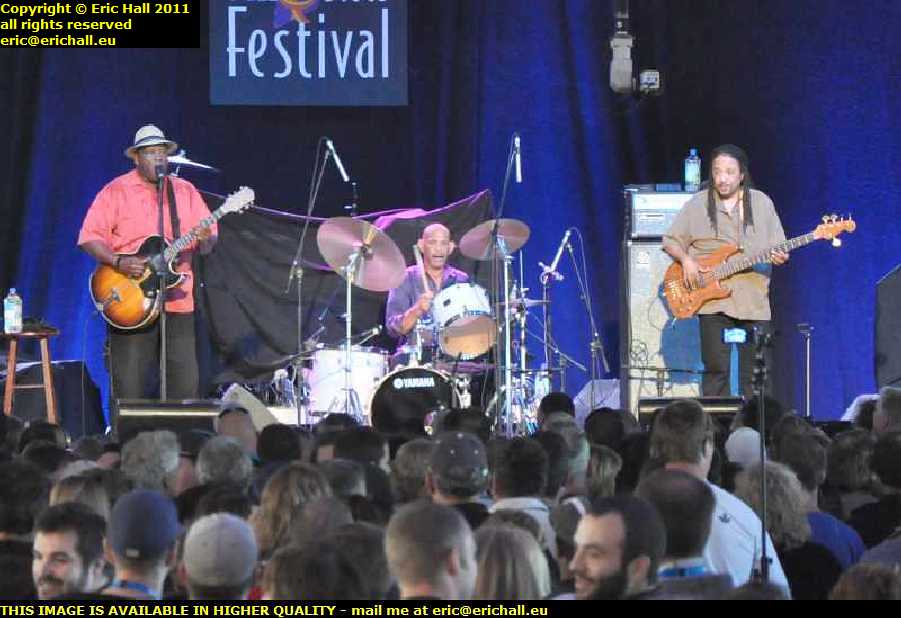 I enjoyed the concert, especially as they played “Good Morning Miss Brown” – an old blues staple that was part of our playlist with “Jack the Ripper” and “Orient Express” in the early 70s.

And I enjoyed his sense of humour too. He played some of his own compositions as well asa few old standards and generally took the mickey out of the audience “I recorded this song when ‘it’s squid-dipping time in Nova Scotia’ was top of the Canadian hit parade”. 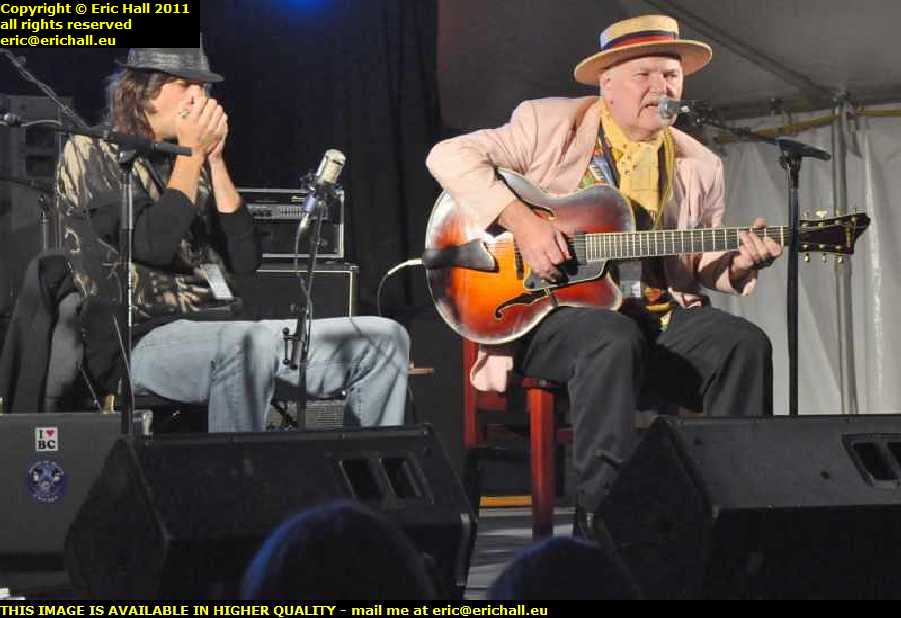 Now what do you notice about this acoustic guitar?

That’s right – it’s a seven-string guitar made by Eastman and I’ve never seen one of these before so I went off to have a chat with the musician, TJ Wheeler, after the concert. Apparently most musicians string it to A to use it as a seventh string for chords, but he has it strung to B and uses it to play walking bass notes while he’s playing a “normal” chord. 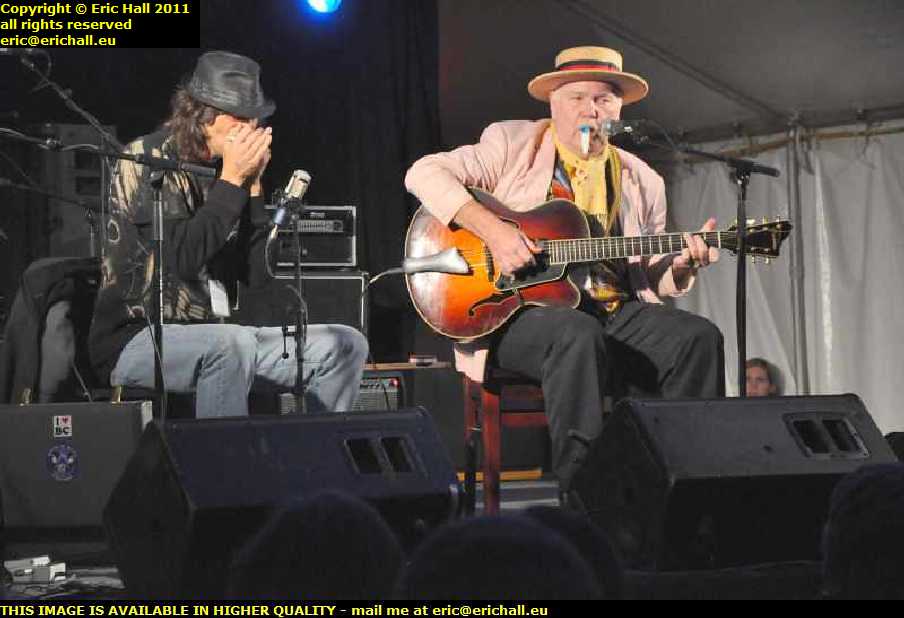 Not content with playing acoustic guitar and bass at the same time, he can play the kazoo too. I would have been confused a long while before this.

Still, they are all bizarre in New Hampshire, which is where he comes from. And his gob-iron player is Dan Robichaud who tells me that in his day job he’s an educator attached to the First Nation communities in New Brunswick. 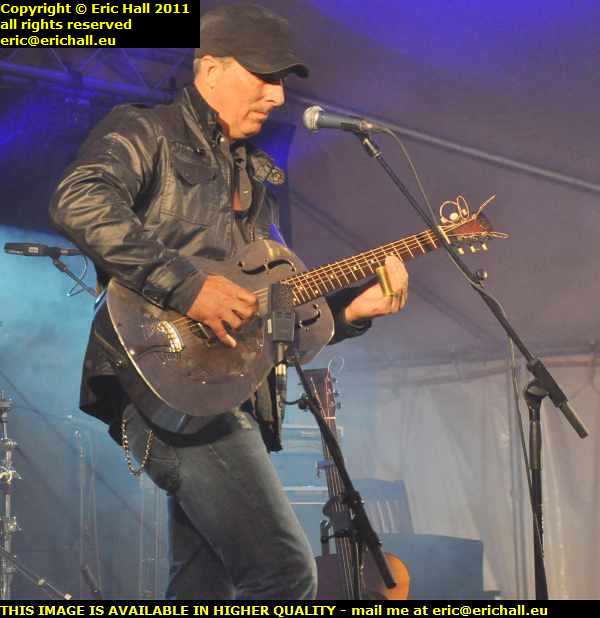 Next up was a guitarist called Thom Swift. He played a variety of different guitars, including this interesting 1930 National Steel guitar – and steel is the right word to use, because it is.

It has a built-in speaker in the front that resonates backwards into the body and the sound reverberates around and escapes out of the holes in the front. They were made for public performance in the days before electricity 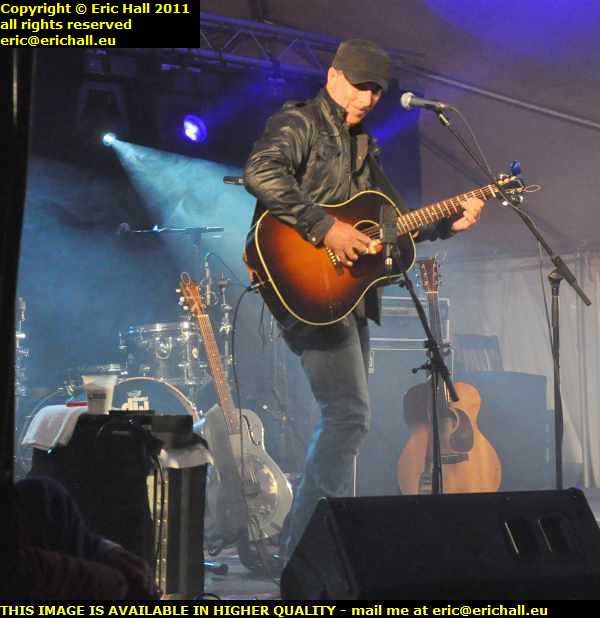 I quite enjoyed his act, as did the large crowd here in the Hoodoo House, even if he did spend a great deal of his time singing maudlin songs about his mother and his dog.

But isn’t that what the blues is all about? As for me, I regret very much going on the Prozac because I haven’t had the blues for years. I’m going to have to sort out my bass guitar and take up the music again. 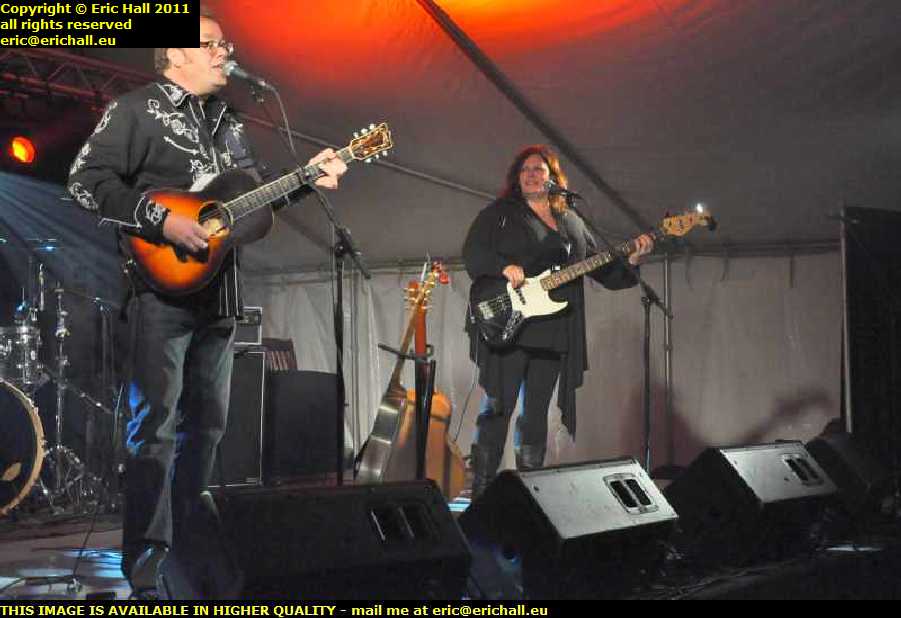 Final act up on stage at the Hoodoo House tonight was Rick Fines, complete with a lady bassist and I’ll try to track them down too to find out her name, as I missed it (out getting a bag of chips at the Lebanese takeaway down the road) when they came on stage.

I quite enjoyed their act too – quite simple basic blues, but then what do you need more than that as entertainment? It’s possible to overcomplicate your music and play ten notes when one note is much more effective, isn’t it, Chris Squire and Jimi Hendrix?

And so having had a really good day out, and now that I’m thoroughly exhausted, having walked about 100 miles today, I’m off to bed.