… to leave the comfort and safety of my comfortable bed. 3 alarms went off but it was still something of a struggle to heave myself out of my stinking pit. You wouldn’t ever have thought that last night I was in bed by 23:15 and was in such a deep sleep that the midnight buzzer in the verandah woke me stark upright.

After a rather tired breakfast, I spent some time updating the Radio Anglais stuff – the databases that I keep of what we’ve done and when we’ve done it – and then I updated out Facebook page, and now that’s online too. You can see it here if you like. I hope that you’ll pass by and give us a “like”.

When that was done, I carried on with my own website – I want to bring that up-to-date too but that’s an impossible task, which I fully realise.

However, in between times, I put another coat of varnish on the shelves that I cut yesterday and also on the shelf that will be going over the door. The aim was that they would dry ready for this afternoon.

I forgot that the boulangère is on holiday. That meant that I had to wander off to Pionsat and the Intermarché to buy some bread for lunch. And I wasn’t there five minutes either. It was a baguette today, and I have some speciality bread for tomorrow and Friday. 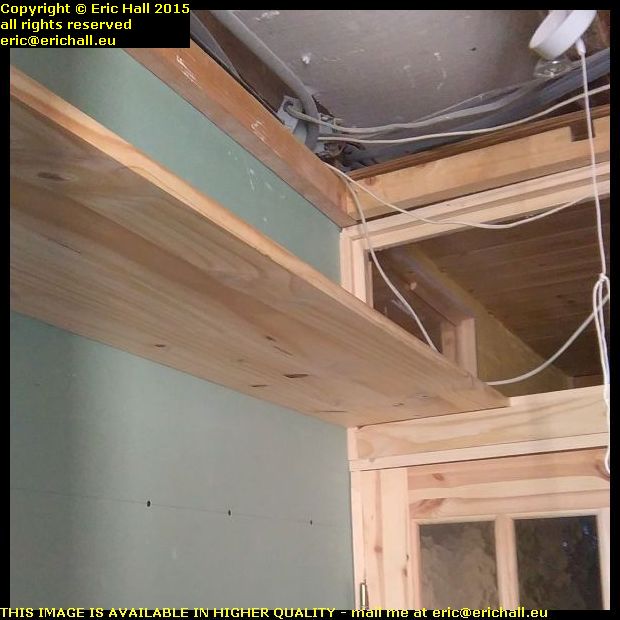 First job after lunch was to fit the shelf in the shower room.

Space, or lack thereof, is something from which I’ve always suffered and so I’m fitting as many shelves as possible as I carry on with the development. There’s at least two feet (60cms) over the door in the shower room and that’s crying out for a shelf for the washing products and the like until the kitchen is done (whenever that might be). No sense in wasting the space

But the rest of the work isn’t so straightforward. The flying shelf is actually two layers of wood sandwiched together. The idea is that the electrical plugs and the 12-volt LED strip light will fit in the bottom part with the cables sandwiched between, and the top part will go over the top to keep everything covered.

That works fine with a 20mm-thick shelf when your mains plug is 18mm deep, but when your light switch is 25mm you need to think again. Accordingly I spent much of this afternoon making a pattress out of a pine offcut. 18mm deep, this home-made pattress, and that will do the job quite nicely. And it’s also enabled me to have a think about fitting a 12-volt DC socket there too.

And that, dear reader, took me until 20:20 tonight – something of a record for just recently. But today was much cooler, the temperature in the attic never passed beyond 30°C, and it gave me much more of an incentive to work. I even managed to tidy up a little in here too.

I wonder what tomorrow will bring.