My little circular saw has packed up today, which is something of a minor disaster. The bearings on the rotor have gone and so the blade won’t turn even though the motor is going round. And the big old one that I have from years ago, that’s not doing anything at all.

All of this is rather unfortunate as I was in the middle of trimming down the door for the shower room. The Ryobi Plus-One circular saw cut some more but then the lithium batteries went flat (no hope of the old ni-cads powering the saw) so in the end I had to fit a guide and then finish cutting it down with a rough-cut handsaw and tidying up with the belt sander.

That was all rather a shame as I was well on my way to finishing the fitting of the door. I could have had it hanging tonight if everything had gone as planned. As it is, it’s going to take a while to finish off now.

I’m disappointed about the saw. It’s a little 650-watt machine that runs perfectly off my solar power system – most of the other ones are far too powerful and consume too much energy. I’ve had this little one for quite a few years and it’s done me proud. I’m not sure where I’ll be able to find another one like it.

This morning I was up yet again before the alarm and managed a good morning on the internet. I’ve restarted the web site again seeing as how I’ve finished (for now) the radio stuff and I want to catch up, seeing as how I’ve done next-to-nothing on it for ages and there’s a lot to do. 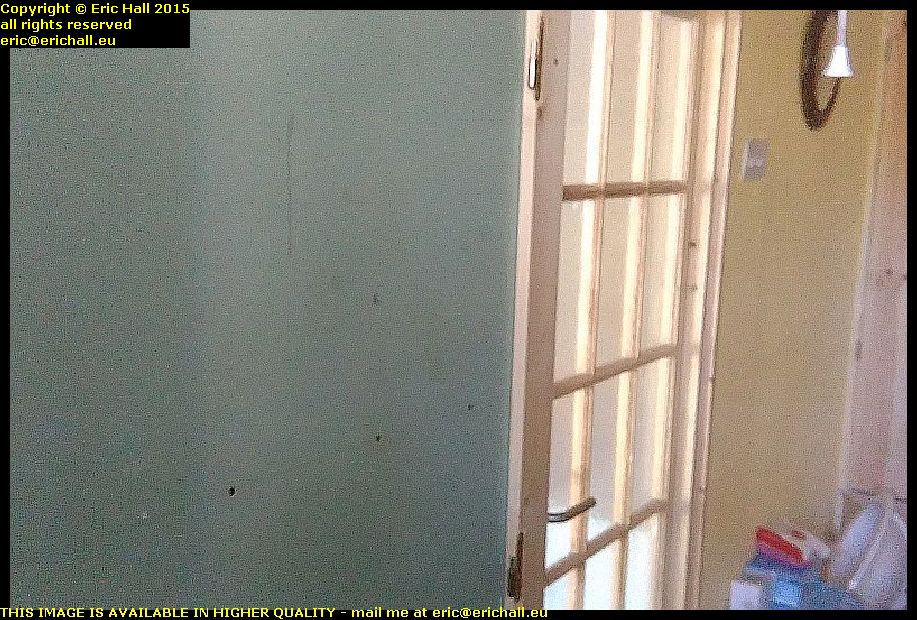 Once I’d organised that, I went off and cut the lets for the hinges into the door frame. That took ages and I had to sharpen the chisels a couple of times. This floorboarding that I’m using to make the door frames is pretty tough stuff.

And then we had the saw issues.

I’ll have to see what I can find on Saturday when I head off to Montlucon for the tiles. If there is one about anywhere, it will be in Montlucon.

UPDATE
Having a look on Amazon, there’s a 600-watt circular saw on special offer at €62:95 – and it’s a Bosch. If I’m going to have low-powered lightweight tools for what I’m doing, I’ll probably be better-off with something high-quality like a Bosch rather than a cheap generic model at half-price, and so I’ve placed my order.

It’ll be here on Tuesday. I hope that I will be too.