This morning I had a good go on the website. For the last couple of days I’ve been making a start on the pages for the month I’ve just spent in Canada, and I’m actually on Day 4.

You might therefore be thinking that in another 10 days or so at this rate I’ll be finished, but I bet it will be nothing like. The first three days were pretty uneventful – it was on the fourth day that everything started to happen. I can see this being more like 10 months before it’s done. 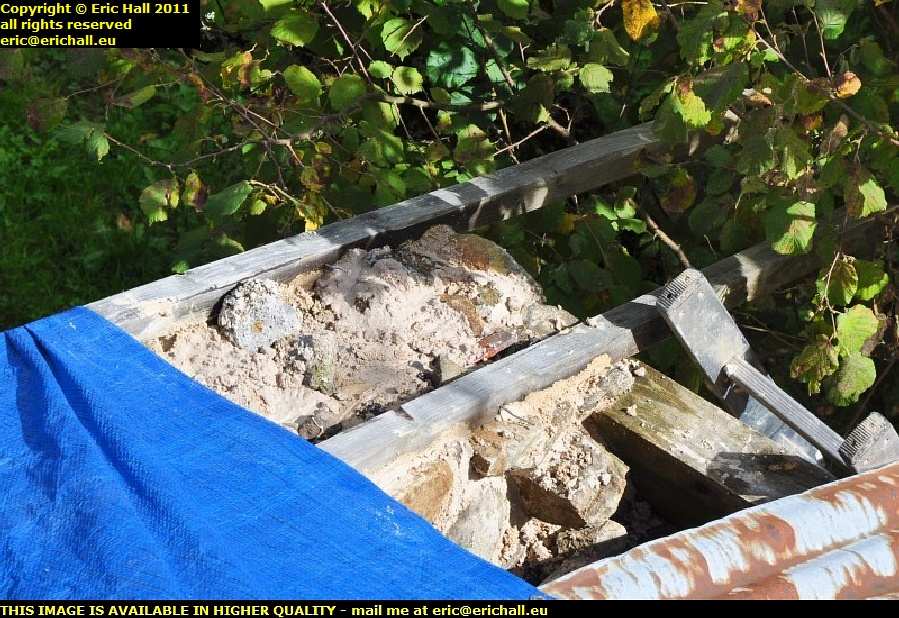 This afternoon I’ve been up the wall again. Not as much progress as I would have liked, but the chevrons at each side of the wall that I have been doing – they are now nailed down to the beam and the outer and inner faces to the wall are now completed.

I’ve been infilling with crushed breeze block and a weak concrete mix and I’m about halfway up the centre of the final part of the wall. It won’t be long now until that’s done too.

It’s a shame that I couldn’t finish it this evening although I was doing my best. I was beaten by the dark (and I really DO mean dark) because it was 19:25 when I finally knocked off.

We also had some excitement elsewhere around the premises. I have a pile of dustbins, buckets and so on all around here in crucial places catching the rainwater to be used in the garden or in concreting and the like. A few days ago, the friendly frog who lives around here hopped into one and couldn’t get out. Luckily I noticed him and was able to liberate him.

This afternoon he had managed to do exactly the same thing. I saw him there when I went to wash my hands, and so I fished him out.

But badger me if, this evening when I went to fetch some water for washing up, he hadn’t gone and done exactly the same thing again.

That’s three times I’ve rescued him – if he ends up in there again tonight, well I’m afraid he’s on his own.

And we had some wind today – and serious wind as well, gusting up to 26kph which is not far short of a record for here since I’ve had the anemometer installed. All I need now is to fit the wind turbine up there and I’ll be happy. It’s high time it was in the place where it ought to be and doing the business