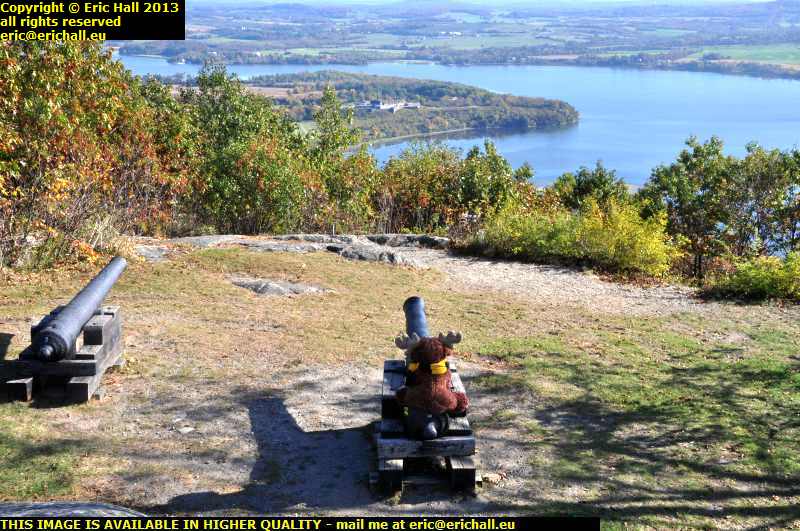 mans … "persons!" – ed … a British 12-pounder gun that was dragged to the top of Mount Defiance by a troop of General Burgoyne’s artillery with the aim … "ohh, well done!" – ed … of threatening the American rebels in the fort way below on the promontory on Lake Champlain.

It just goes to show you the power that modern artillery posed back in the early modern era because I doubt very much whether any cannon in the British artillery train, and certainly not a 12-pounder, would have had the effective (or even the absolute) range to do anything like any serious damage to the fort.

Don’t forget that these forts are not like early medieval castles, built of stone walls, where a few 14th- and 15th Century cannon balls could send them crashing down. These fortresses might be faced outside and inside with stone (or even wood) but in between the facings was often as much as 24 feet of earth or sand and any cannon ball, explosive or otherwise, would be merely smothered. At Fort William Henry they were firing point-blank (like 150 yards) with all the artillery that Moncalm had and the only reason that the fort’s north-western bastion collapsed was because a lit howitzer shell from outside landed in an opened box of fused shells on the parapet. And even that wasn’t enough to breach the walls – it simply showed Munro that the writing was on the walls. 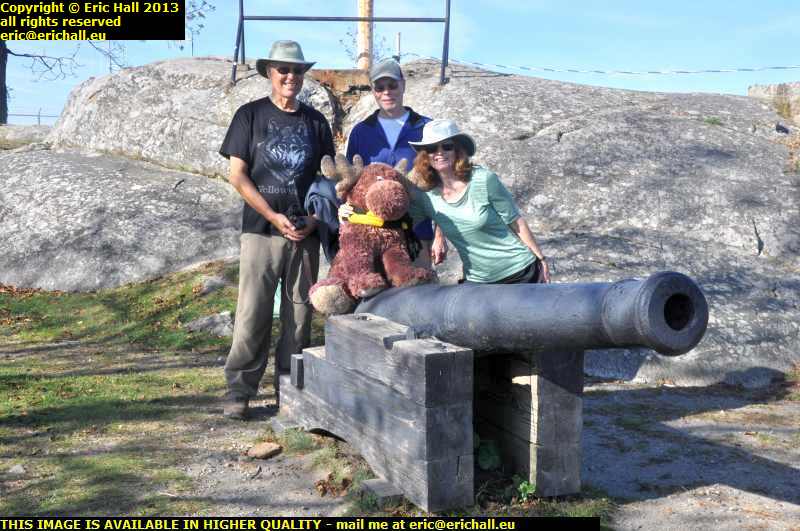 Of course Strawberry Moose was not alone up here. He recruited a very keen and willing artillery crew from amongst the local residents out for an early morning hike, and they were only too ready to help him in his exploits with his weapon.

With one volunteer being worth ten men, it was certainly enough to put the wind up the American rebels down in the fort below and they soon fled across the lake into Vermont. But seriously, I cannot imagine whatever was going through the mind of the commander of the fort that he didn’t put a detachment of his men up here to stop the British from taking the position and threatening the fort. Overconfidence? 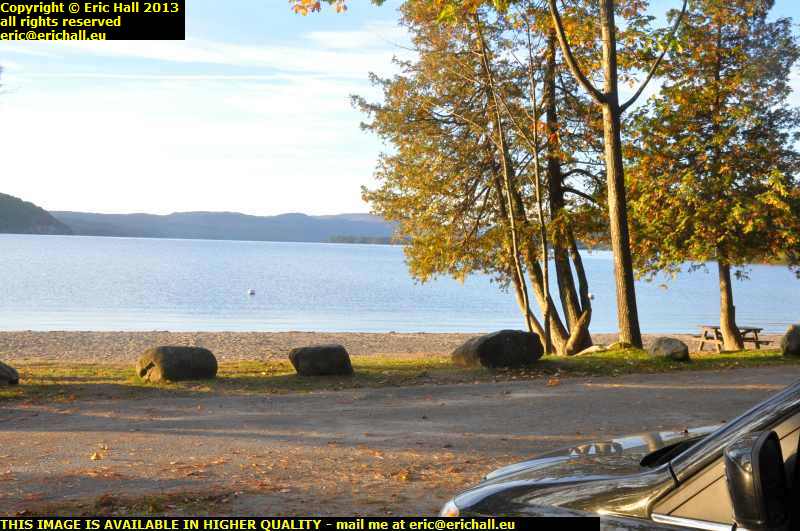 I did promise you all yesterday that I would show you a photo of my camp site from last night, and you won’t be disappointed, because I wasn’t. This is Rogers Rock campsite on the very northern edge of Lake George and it is one of the most spectacular places in which I’ve slept (strangely enough, of my “top 10”, every one of them is in North America).

As for Rogers, he was someone who became totally disillusioned with the British tactics of marching in fours, dressed in bright red uniforms, through the forests around here. He recruited a band of volunteers, called them “Rogers’ Rangers”, and dressed them in greens and browns. Then he sent them crawling through the forest to wreak havoc and destruction amongst the French military, their native Algonquin allies, and the Frech settlers who had settled around the head of Lake George in defiance of the treaty of Utrecht of 1713.

From there I drove on across the pass and the old portage to Crown Point, where Lake Champlain narrows to about half a mile. Crown Point actually faces north rather than south and so once the French had abandoned Fort Carillon (as Fort Ticonderoga was known) in order to defend Montreal after the fall of Quebec and the loss of Montcalm’s army in 1759, the British dashed here to where the French formerly had a trading post (Fort St Frederic) to take possession. 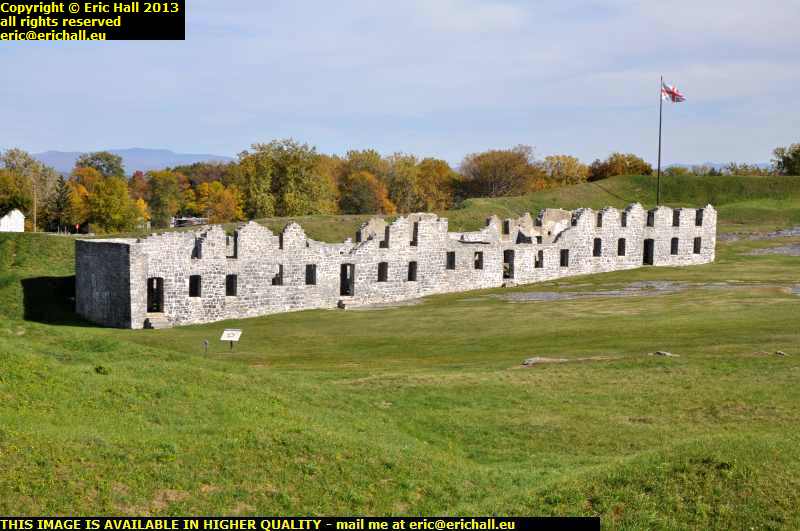 Here, they started to build what would have been the largest fortress in the whole of North America and in a rush that would have put modern builders to shame, they were well on the way to completing it when the dramatic collapse of French military resistance in North America in 1760 meant that the fort was no longer necessary. After all, who could have foreseen the American Revolution?

The fort was built much more substantially than this, but a chimney fire in one of the barracks went out of control and set alight the armoury, wherein was stored most of the British munitions, including a couple of tons of gunpowder. The subsequent explosion atomised the armoury and set everything else alight, including the timber cross-bracing within the earthen walls and so there was a subterranean fire that went on for weeks until everything was consumed. 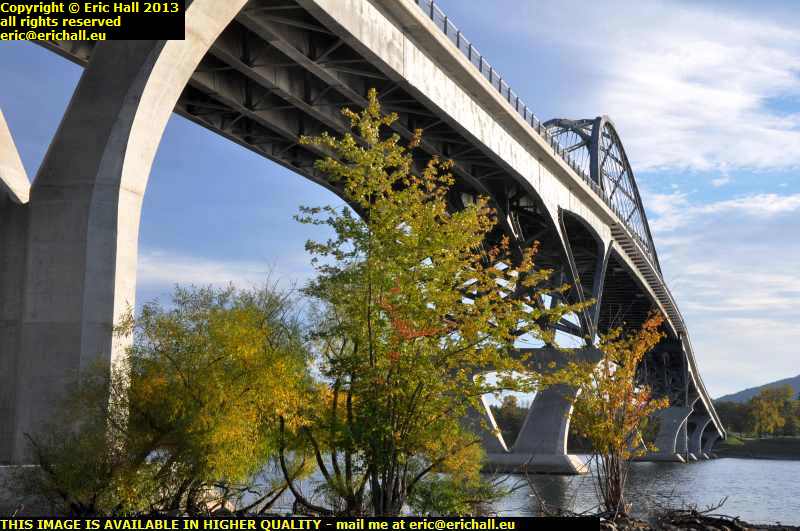 There’s a bridge here too – the Champlain Bridge, that crosses the lake into Vermont (I was in Vermont when I took this photo). Pretty though this bridge might be, it’s not a patch on the one that used to be here. That was a graceful steel lattice-girder bridge that was totally innovative in the 1920s when it as built, but the techniques used went on to be standard bridge-building practice until the advent of (yeeuucchhh) concrete bridges.

Accordingly it was classed as a National Monument in 2009 and a team of experts was sent to examine the bridge and make an inventory. What they found so horrified them that the bridge was immediately closed and demolished, for it seems that in the confusion about who actually owned the bridge, there had never been an inspection or even five minutes of maintenance of the structure since the day that it was built.

So tomorrow, I’ll show you this evening’s camp site and you can see what you think of that.