… another discussion and more photos of the parking around here – not because of the fact that there was nothing to report (there was in fact even more than in the last few days) but because I’ve had other things to do.

I told you last night that I would go and visit Marianne today and give her a progress report, which I duly did. Her grave has been restored from the last time I was there, and it’s grown a basket of flowers – obviously someone else has been to visit her.

Her headstone hasn’t arrived yet though, but then again what I have ordered for her will not be the work of 5 minutes.

On my way to her grave I pass by the military section of the cemetery, where soldiers who died during the defence of the city in August 1914 and May 1940 are buried.

There’s also a section that deals with the civilian victims of the two World Wars and I went for a wander around that part of the cemetery today.

Many people, mostly British and Americans, tend to criticise, sometimes vehemently, the citizens of many occupied countries for what they see as their collaboration with the occupying powers during the wars.

They also criticise those in Syria, Iraq and Afghanistan who are standing their ground and fighting the occupying powers, but that is by the way of course.

But these British and American critics of the civilians in these occupied countries are being extremely naive. They simply have no conception of what was going on and what it must have been like to live in these countries. 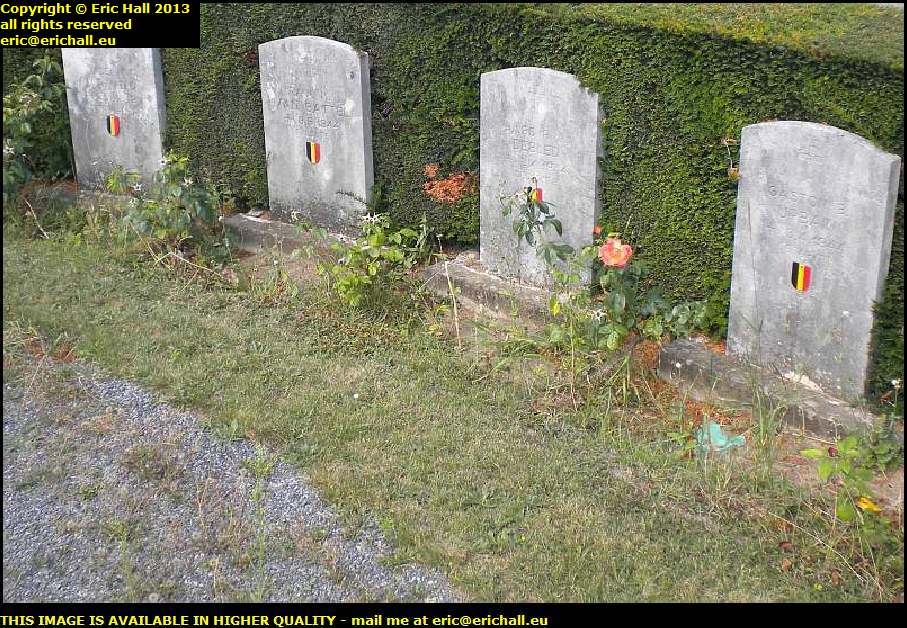 Here are a handful of the hundreds of graves in this part of the cemetery – people who died after falling into the hands of the occupying powers.

If you enlarge the photo you will notice the legends thereupon – “FUSILLE” (shot), “EXECUTE” (executed), “DECAPITE” (decapitated) and all of the hundreds of graves here, of both men and women, bear similar legends.

And none of these legends tells you anything about the sufferings that they must have undergone at the hands of the Gestapo before the Gestapo tired of amusing itself with them and sent them on their way.

Yes, it’s easy to criticise people for collaborating with the enemy when there’s a whole ocean or a sea between you and the enemy. The British and Americans would think twice then.

I don’t seem to recall the British inhabitants of the Channel Islands putting up too much of a fight when they were occupied by the Nazis – in fact they even sat on their hands for 10 months, slowly starving to death, after the war had passed them by.

They couldn’t even seize the initiative then when the Germans no longer had anything to fight for. 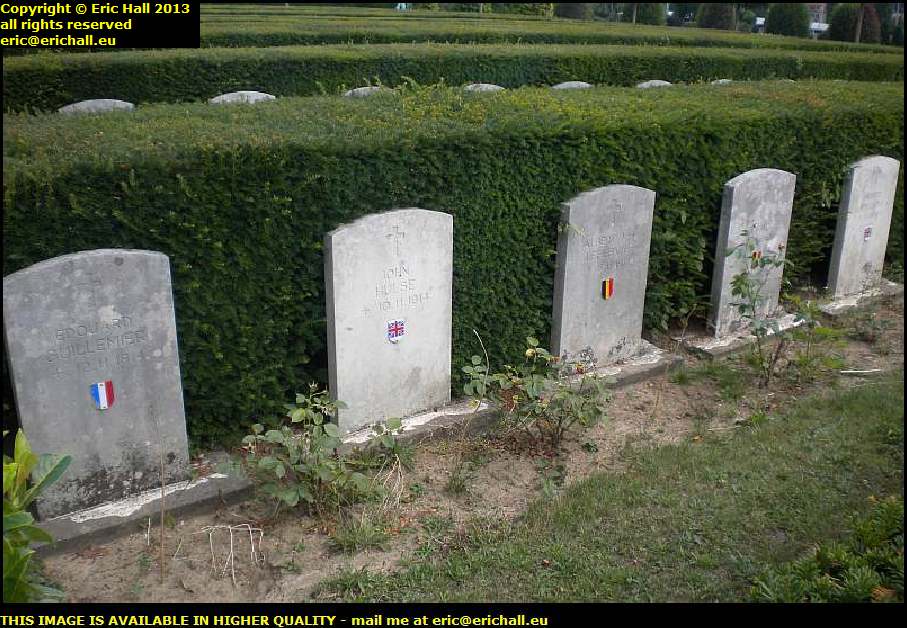 There’s also a section for civilian casualties of the Germans in World War I.

All kinds of people were caught up in the dragnet during World War I and in this photo you’ll see graves of a couple of British civilians and a couple of French civilians, as well as some Belgian civilian graves.

The flat at Boulevard Reyers where I lived for a few years, that backed onto the Tir National – the National Firing Range – and that was where people who were singled out for “special attention” by the German occupying forces were executed, and subsequently buried.

Edith Cavell was shot there, and many famous people from World War I and II, and many SOE operatives who were running escape lines across occupied Europe and who fell into the hands of the Gestapo are buried in there.

Even more poignant are the graves of the “unknown” – no-one knows who they were and why they attracted the special attention of the Gestapo. From the one or two survivors of this kind of treatment, the suffering was appalling and death was often a merciful release.

Leaving Marianne’s grave, I heard a familiar sound in the distance – yes, a referee’s whistle. The football season has restarted here in Belgium and it seems that there’s a football club here in Ixelles – the Royal Ixelles Sporting Club.

They play at the sports ground down the hill from the cemetery and today, they were at home to La Hulpe in Division 3b of the Provincial League of Brabant, so I was informed. 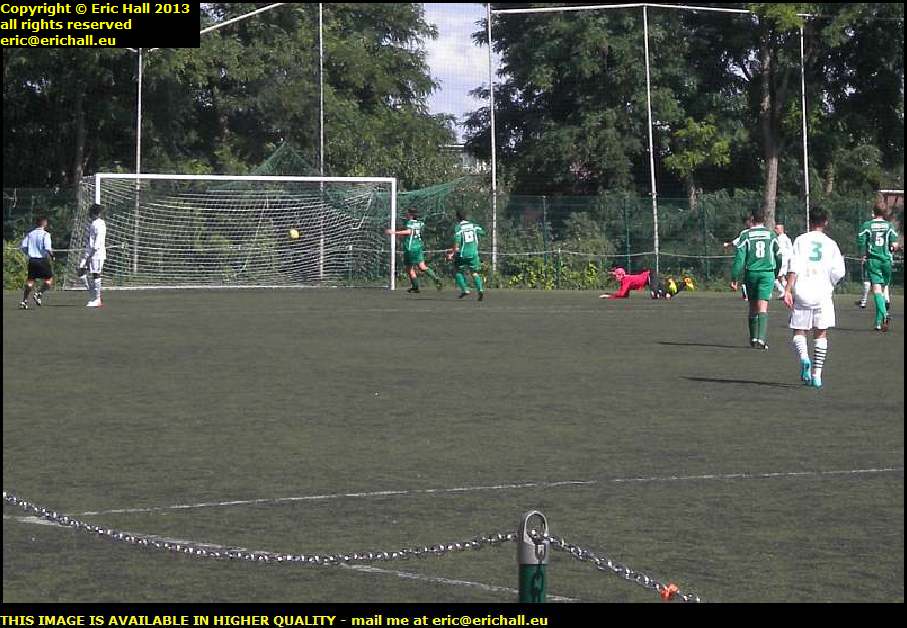 The standard was pretty dire, I have to say. FC Pionsat St Hilaire could have defeated both these teams without drawing too much breath, but at least it was football and so that cheered me up considerably.

I was wondering what I was going to do for my weekly football fix while I’m living here, and now I know. It’s played on artificial turf, but I don’t suppose you can have everything.

Reminds me of that gridiron player asked by a television reporter if he preferred grass or astroturf, replying “hey man, I ain’t ever smoked astroturf” 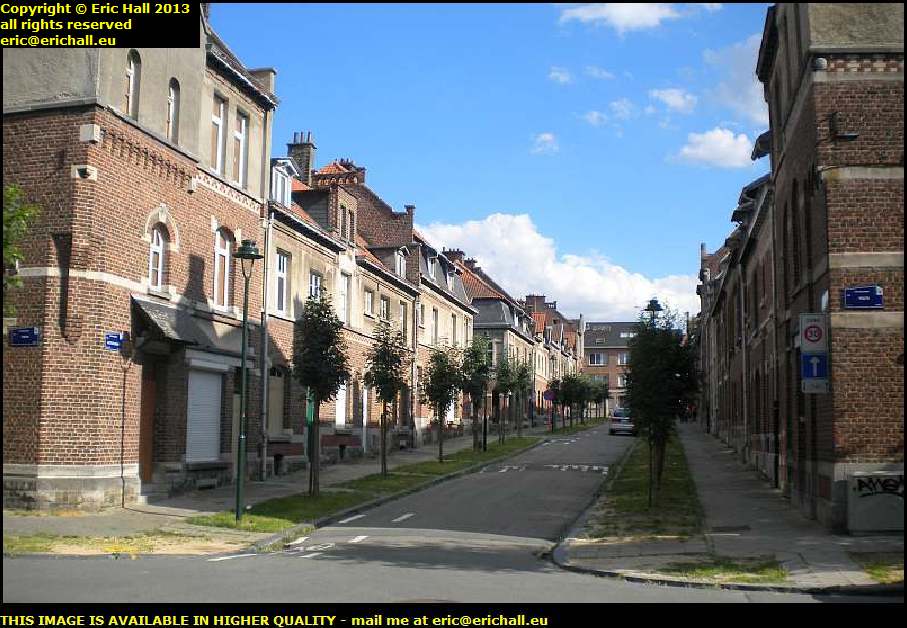 But never mind the stadium itself. That’s quite a modern edifice, but it’s surrounded by Council Houses and Council Flats and not just any old council houses either.

If you’ve seen my page onthe houses built by the Peabody Trust in London, you might recognise the influence.

Brussels was also a slum-ridden city at the turn of the 20th Century and a great deal of effort was put into rehousing some of the inhabitants of the worst areas.

So there you are – 4 photographs and 1002 words. You really ARE having your money’s worth today, and on my day of rest too.

Still, back to work tomorrow.