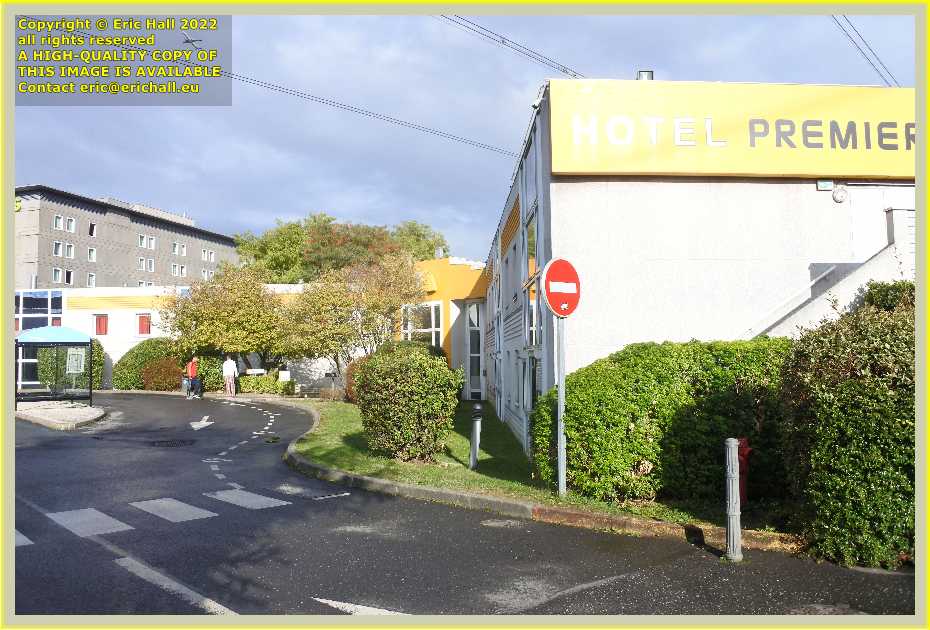 And when I say “we”, I do mean “we” because I am not alone. And who I’m with and what I’m doing here, well, you’ll have to wait until tomorrow evening to find out.

That is, if things go according to plan. But they may well not because I have a start tomorrow morning at 04:45 and I’ll still be on the road at 04:00 the following morning too so trying to get some sense ouy of me at that time of morning is not going to be easy.

We shall have to see

So this morning I fell out of bed almost as soon as the alarm went off and compared to how things have been just recently, it was rather a rapid rising too.

After the medication I had several things to do that were quite urgent, namely to book myself a train and a bus. That was much more complicated than it ought to be too and in a few days time we really will be breaking new ground if it all comes off

All of this is necessary because there have been quite a few changes just recently things aren’t as they were and all of the changes are for the worse. It seems that, as usual, people are determined to go around sticking the batons dans les roues as they say around here and disrupting everyone’s progress.

But more of this anon.

Having done that and printed out my tickets for later next week, I finished off backing up the computer and then began the tidying and cleaning up.

A shower and a haircut were next and then I bleached everything as usual, washed the lino in the kitchen, finished off the packing and staggered off out.

A bus was there at the bus stop but I didn’t take it for the simple reason that it doesn’t go anywhere where I want to go, and the connections are all totally up the spout. It’s unbelievable what they have done with this stupid bus service.

So having exchanged a few pleasantries with a couple of my neighbours who were chatting outside, I headed off on foot for the town. 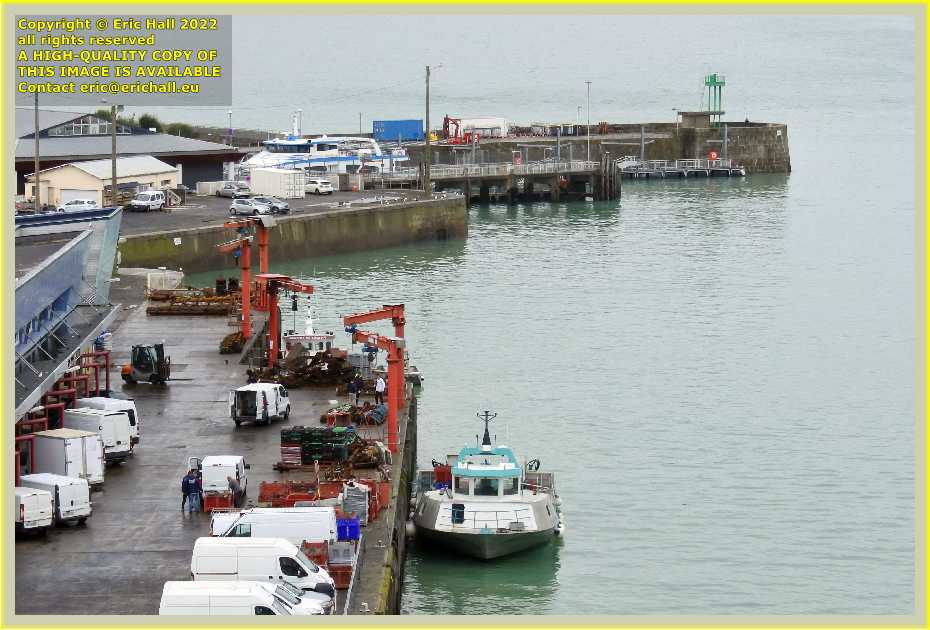 As usual, I stopped at the viewpoint overlooking the port to see what was happening there and to check the camera.

Down there moored at the fish processing plant this morning is La Grande Ancre. We’ve been seeing quite a lot of her jusy recently going out and back to the Ile de Chausey. She’s usually loaded up with fishing gear but she doesn’t seem to have much on board today.

A little further back tucked around the corner is Les Bouchots de Chausey and a couple of even smaller boats.

Meanwhile, over at the ferry terminal is Belle France, one of the ferries that go over to the Ile de Chausey. I wonder if her presence there has anything to do with the coach that’s parked at the terminal building. 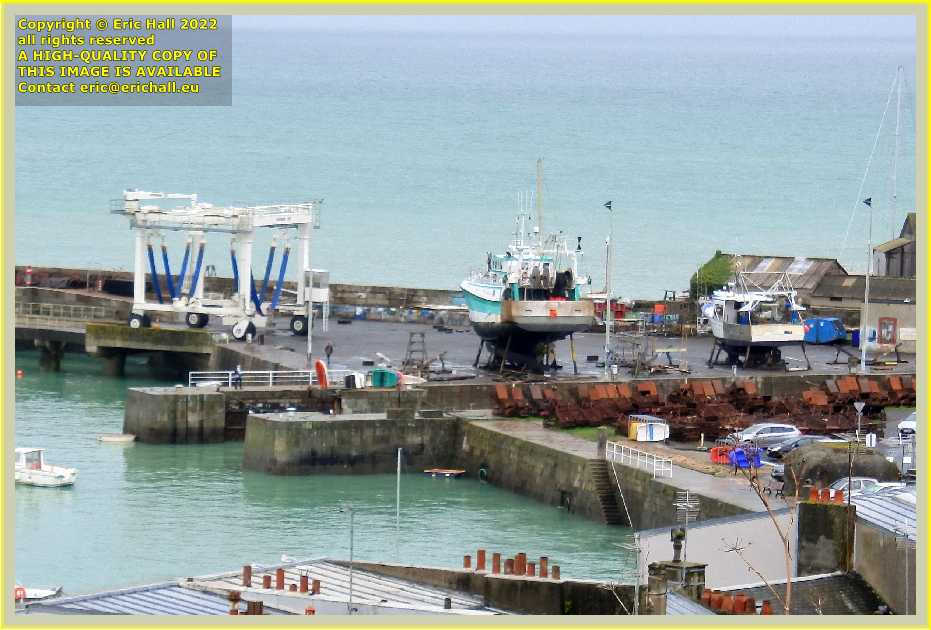 Yesterday we saw that all of the boats that had been in there just recently, apart from Briscard, had gone back into the water and she was then the only one still there.

This morning though, she seems to have acquired another companion. There’s another trawler that has come in to join her. By the looks of things from here, she could possibly be Charlevy but I’m really not sure. She was in there for a while a month or so back so I wouldn’t have expected her to be back at the moment. 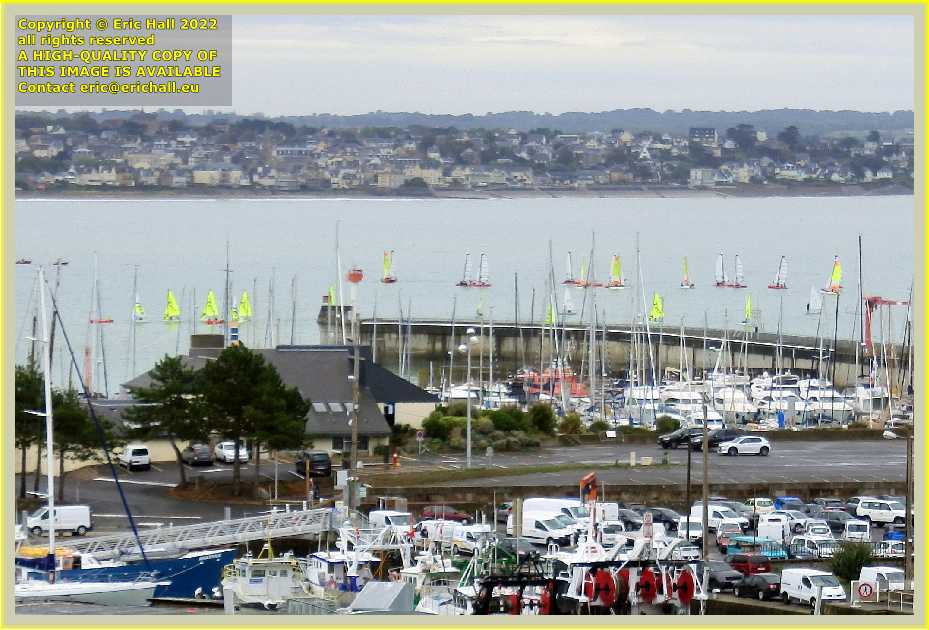 Meanwhile, in other news, there’s plenty going on out in the bay in front of the port.

It looks very much as if a couple of the sailing schools are going out and about early this morning. There are a couple of kayaks too.

They aren’t going to have a very good day for it though because t’s threatening rain right now.

The walk down into town was agonising as I was expecting but at least I was in time for the bus, along with a whole crowd of schoolkids. But I could at least grab hold of a seat and have a rest. 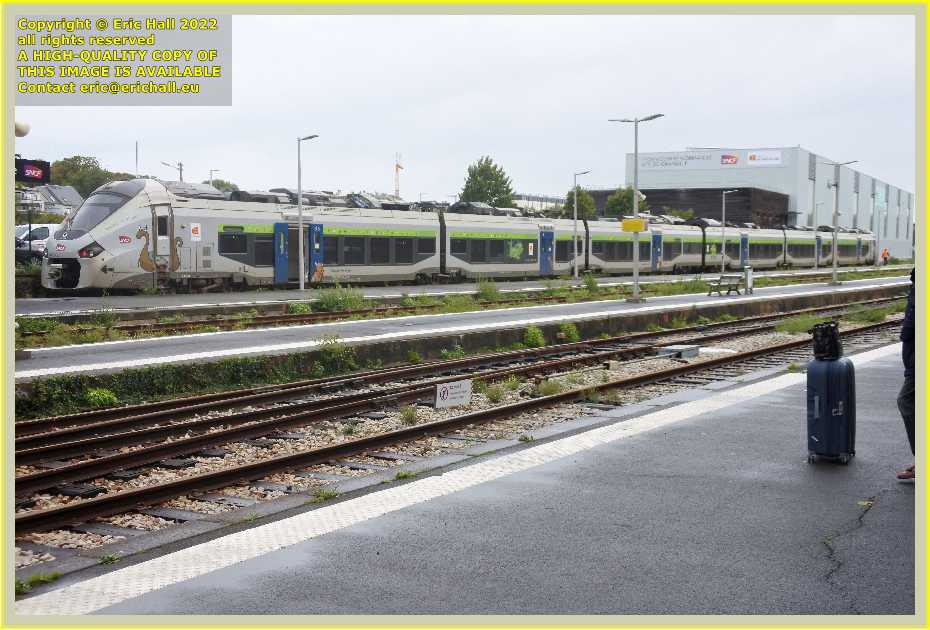 The bus dropped me off at the station in plenty of time so there was quite a wait for the train.

The coffee machine was out of order yet again (or, more likely, “still”) so there was nothing to do except sit outside and watch them shunting a train around across the station.

At least the rain was holding off for now so it wasn’t too depressing.

One added issue was that my electronic ticket wasn’t working but the ticket inspector was also waiting for the train so we had a chat about it. She inspected my receipt and said that it would be sufficient. 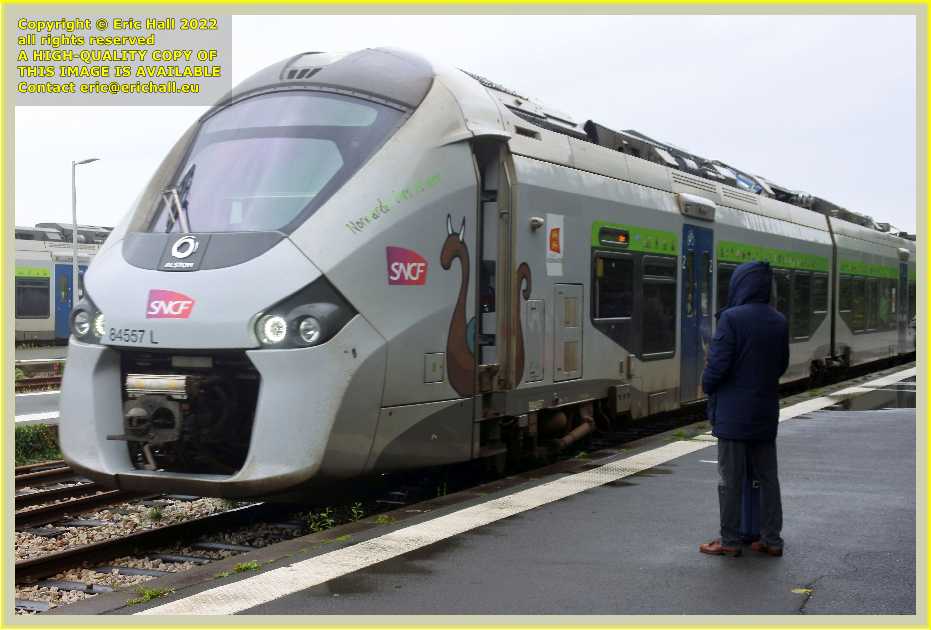 The train pulled up a few minutes late and we swarmed aboard. There was quite a crowd gathered on the platform by now.

At first I had a pair of seats to myself but at Vire I had someone come to join me. I spent the journey backing up the computer from the data stick as far as I could, but the rattling and shaking of the train on a badly-laid line put a stop to it.

At Paris we all swarmed out again and I hit the streets in something of a wave of agony on my way to the metro station.

Going down the steps to the platform was bad but that was nothing to what happened at the Gare du Nord. The escalator was out of order and the climb upstairs on the narrow walkway was agony and I was blocking the path for just about everyone.

Did I mention that I have much more luggage with me than usual?

At the Gare du Nord when I eventually arrived there I wandered off for the train that would take me to the airport. That’s by far the easiest way to find the hotel as all of the directions seem to start off there and, furthermore, there’s even a service bus – the 349 – that passes within 400 metres from where I need to be.

When I arrived, the coffee machine was out of order as well and that’s even more depressing news but they made me a coffee for which I was very grateful.

Holed up in my little room, I had tea. Last night I’d made some rice, veg and my taco roll and I’d put them in a plastic container. For an ad-hoc, impromptu tea it was really nice, especially washed down with a couple of tangerines.

And now I’m off to bed. I’m not looking forward at all to this early start but needs must when the devil drives.