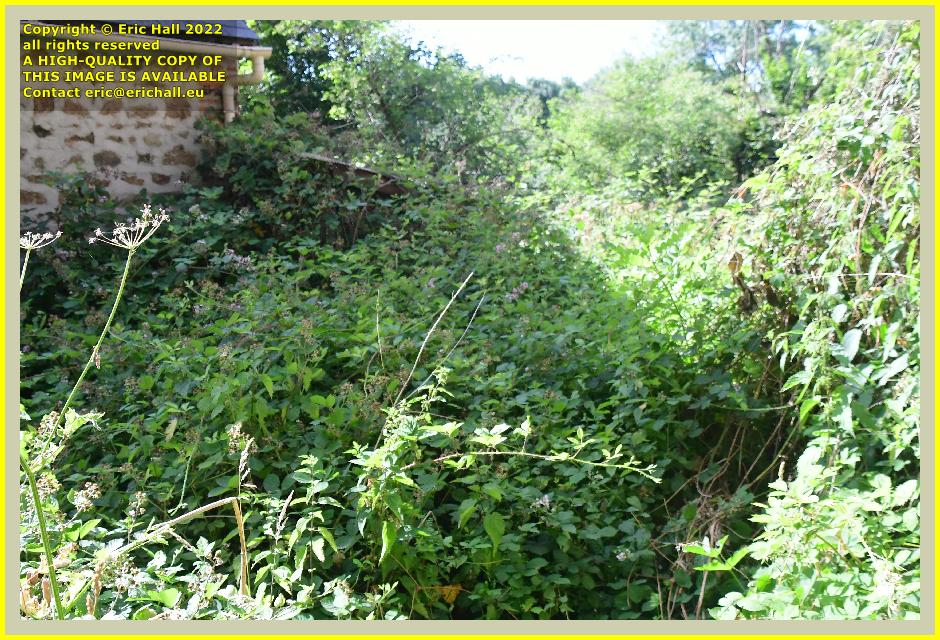 This morning I went round to my house in Virlet. And I’m not going to say too much about it because it was so depressing.

You’ll be able to see what I mean by looking at this photograph. There was no way of getting even close to the house because of all the weeds and brambles.

The last time that I was there two years ago I was able to fight my way into the place with the aid of a heavy-duty brush-cutter but I’m in no fit condition to even attempt that these days.

And in any case I don’t have a brush-cutter. So that ruled that out. But it was such a disappointment.

And for a change, until I saw my house I was feeling fighting-fit. I’d eventually gone off to sleep despite all of the celestial artillery and wasn’t that a real racket? It was the loudest storm that I’ve lived through for quite a while.

As far as I knew I slept right the way through until about 06:45 and stayed in bed until 07:30. The morning cup of tea was rather later than usual.

After breakfast we set off. The house of a friend of Rosemary had been badly bashed about in a hailstorm and some temporary repairs had been effected. The insurance company needed to know that it was properly tarpaulined and as the owner is away right now, Rosemary was charged with the task of going and taking some photos.

It was after that that we went to inspect my pile.

Back here we had a coffee and I had another session with Miss Ukraine and her animal encyclopedia. Considering that she doesn’t speak English or French and I don’t speak Ukrainian (just a dozen or so words of Russian) we had an extremely dynamic chat that went on for ages and she guessed my favourite animal – turning straight away to the page with Polar Bears on it.

Yes, I seem to be flavour of the month right now and I’m not sure why. Rosemary seems to think that I’m the only person who ever listens to kids properly when they talk and that’s the nicest compliment someone has paid me for quite a while.

As I have said before … “and on many occasions too” – ed … I think that kids get a pretty raw deal out of life. No-one ever seems to take any time with them or have any interest in them and what they have to say.

After lunch Rosemary had to go for a doctor’s appointment so I stayed behind and listened to the dictaphone to see where I’d been during the night. We were camping, my brother and I. There was a river that was full of rocks. I made a kind of improvised ram out of an old railway carriage bogie and dropped it in the water on top of these rocks with the aim that the water would carry it down, clear some of these rocks and make the water run quicker. It jammed up under a bridge so I had to get there and free it off. That took quite a while. I set it off again and it hadn’t gone more than 20 yards when it became stuck in the bank of the river. This caused a big rock fall into the river and blocked the river. I thought that what I’d been doing so far hadn’t been a very great success. I had to make tea and we were camping. We had a couple of tents and there was a caravan oven there. There was a shop-bought pizza and I had to make another one. The first thing that I nearly did was to fall into the river. My brother came to see what was going on and gave me a few lectures about everything. Then I started to unwrap the shop-bought pizza ready to put in the oven. That could be cooking while I was making mine. But I didn’t have any ingredients to hand so I was debating with myself how I was going to make this pizza when I hadn’t any ingredients and no facilities like a table or anything to make the pizza on.

And later we’d been in a kind of museum or exhibition or something like that and were on our way out. I’d gone and picked up 2 packets of crisps but I couldn’t work out where to pay for them. I was halfway through walking out of the building before I realised that this wasn’t right so I went to put back these 2 packets of crisps and walked out down these steps. There were hundreds of coaches in this car park and thousands of people milling around. Eventually I worked my way round to where I thought our coach was parked but there was a coach there and they were shepherding a load of prisoners of war off it and marching them off. We were told to wait so we waited for a while but no-one came so in the end we set off towards our coach. This guy with a wooden leg came back and asked what we were doing. We replied that we were going to the coach. He told us we should have waited but we answered that we’d waited for long enough. He made us all sit down in the middle of the street and he asked “where’s this opium?”. We asked “what opium?” and he started playing silly games with us. He said that he was going to make us march all the way back again which we refused to do. We were sitting there in the middle of the road and he was becoming quite aggressive but we were having none of it. There was a party of girls sitting close by. One of them was one with whom I’d wandered around this museum. She shouted over to me that she had taken £1100 out of her bank account, given £310 to someone for something but couldn’t remember what this other £800 was for. Did I know? Could I remember? I remembered vaguely something but this wasn’t the time or place to mention it so I told her that I’d see her later. She replied “if there is a later” because this situation was slowly starting to escalate.

This afternoon I’ve had to help Mr Ukrainian dismantle the interior of his car. I the storm last night he had about 3 inches of water in it. We ended up taking out all of the seats and carpets and putting them somewhere to dry, and then using cloths to take out the water

Tea tonight was the leftover vegetable curry from last night and it was just as nice as yesterday.

So that was that. Rosemary and I were on our own for the evening so we didn’t stay out long. Right now I’m finishing my notes and then I’m off to bed. An early night and more pleasant dreams, I hope.

But who was the girl who I’d been with at that museum? I wish I knew. And I’m sure that you do too.