… you’re wondering, which I’m sure you aren’t because I’m as fed up as you are, there wasn’t any change today in the way things worked out.

So there wasn’t all that much of a morning to do things in but I was working out a couple of plans for later next month. My Welsh exam is on 17th June and then I might go off on my travels for a while. I’m not doing much good here so I may as well not do much good somewhere else.

While I was at it I managed to fit in the time to go for a shower and a good clean-up.

After lunch I had a Welsh conversation class which wasn’t as long as it ought to have been because firstly I had to finish early to go for my physiotherapy appointment and secondly it took an age for me to connect up to the chat. It really was steam-driven internet here today. 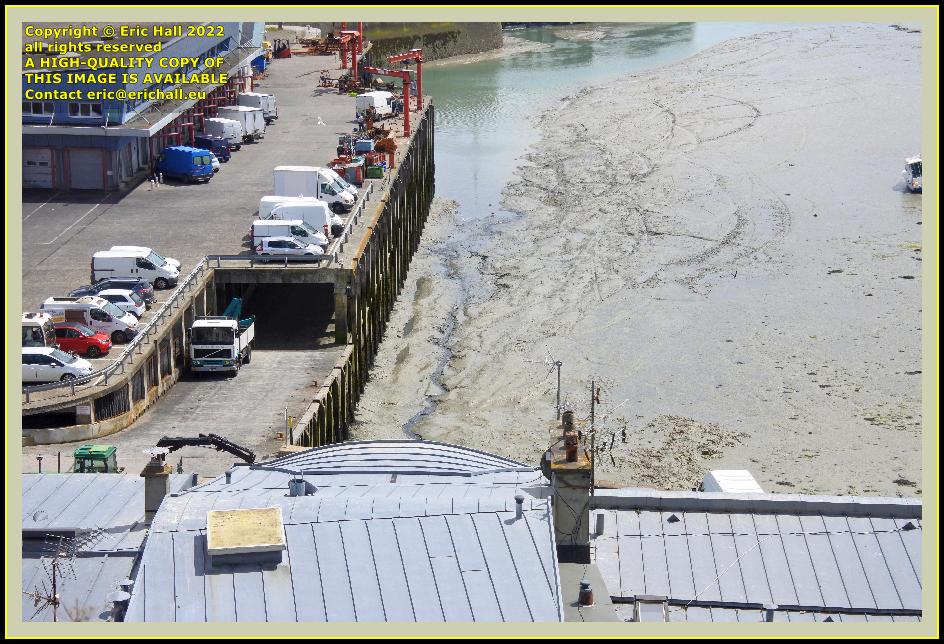 So eventually I had to wander off out for my physiotherapy appointment this afternoon.

As usual I went for a look down into the port from the viewpoint on the corner of the Boulevard Vaufleury and the Boulevard des 2E et 202E de Ligne.

And for a change we haven’t seen L’Omerta settled down in the silt for the last few days. She must have gone out to sea to earn an honest living.

Incidentally, you are probably wondering what the “2E et 202E de Ligne” refers to in the name of the street. It actually refers to the “2nd and 202nd (Regiments) of the Line” – the two infantry regiments that were housed in the buildings here where I live when they were military barracks before the army sold them off in the late 80s. 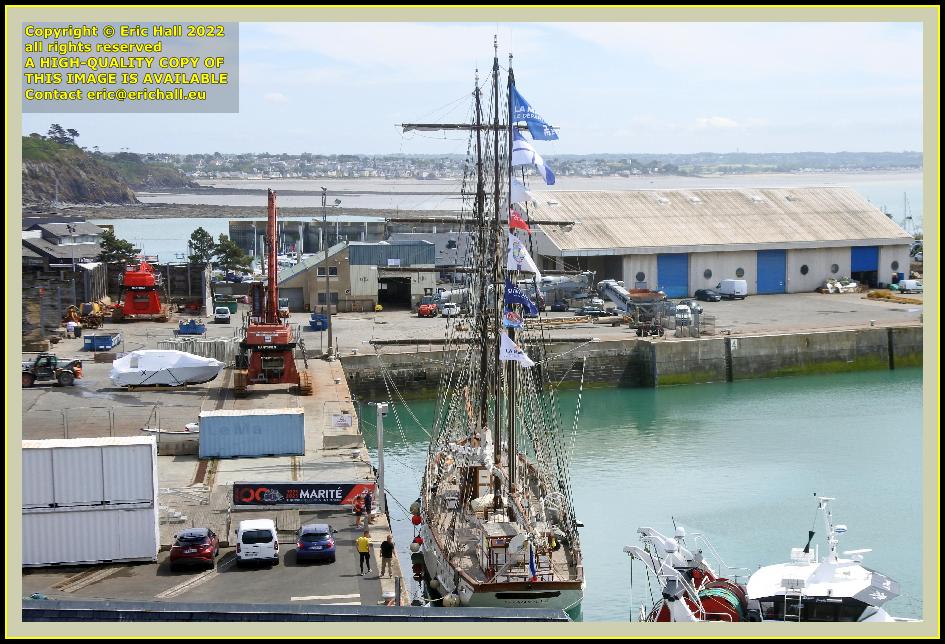 With nothing much else going on around here I headed off down the hill towards the town.

And for a change just recently, Marité is tied up at her berth this afternoon. It looks as if she might be having a day off today.

There are a few people loitering around on the quayside but I don’t think that they will be going aboard because she doesn’t have a gangplank out to the quayside.

And the speedboat that was there yesterday is still there today. No-one has been in from Jersey with a freighter to take it away so far today. 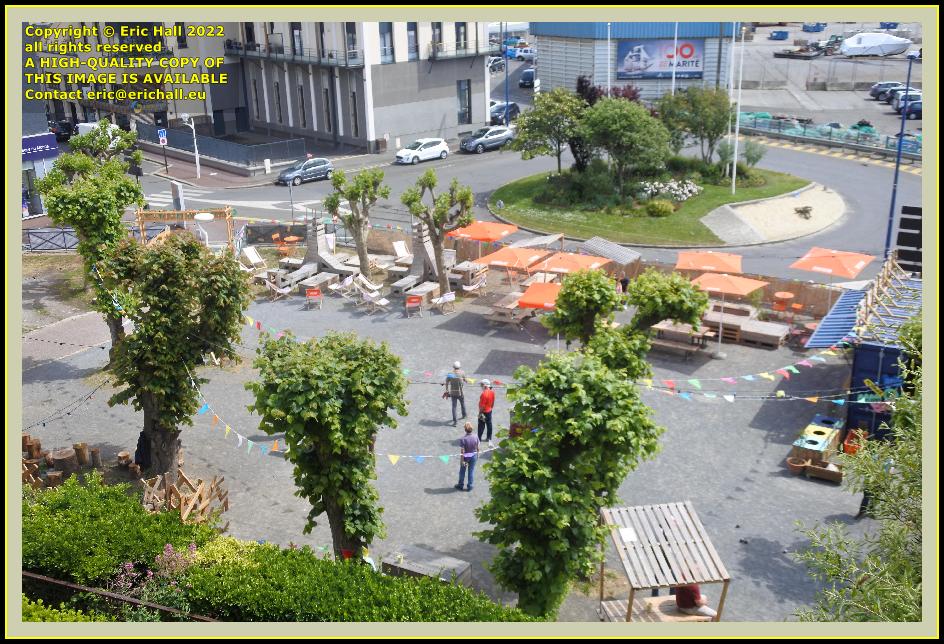 Things seem to be happening at Chez Maguie, the Bar Ephemère that opens every summer on the Place Pelley.

Never mind the boulonauts, the café tables now seem to have grown some orange parasols to shelter everone from the sun and, more likely, the torrential thunderstorms that we’ve been having this last couple of days.

As seems to be the case these days I didn’t enjoy the walk up the hill to the physiotherapist. I’m not doind as well as I did a couple of weeks ago and even then, that was nothing to write home about.

The physiotherapist put me through my paces again this afternoon. I’m sure that it’s a case of “kill or cure” with her. She’s certainly having a good go at finishing me off. 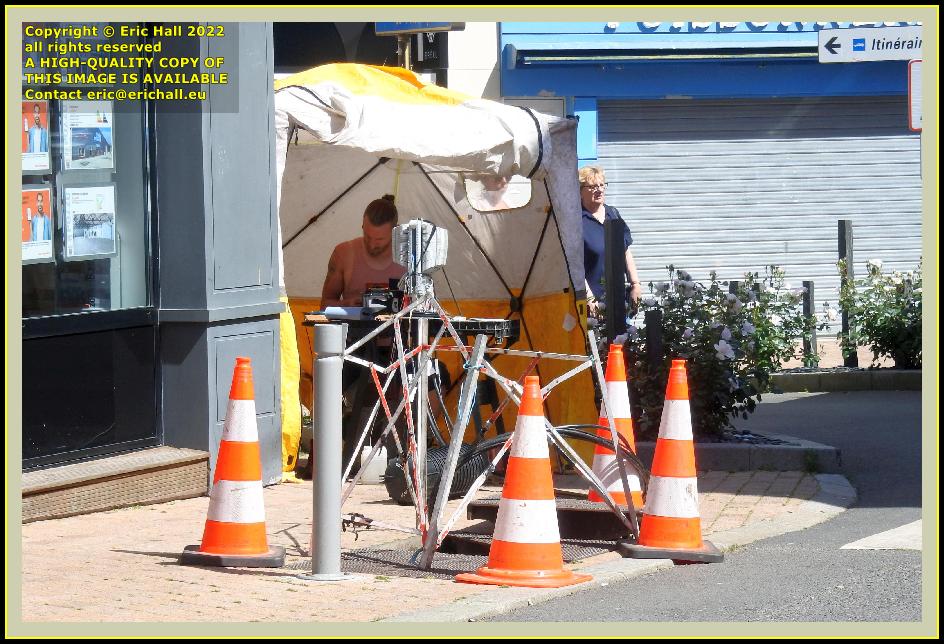 At the end of my session I staggered out into the street and reeled off down the hill into the town centre.

The last time we came by this way, which was on Monday, we saw the electricians at work laying cables in the conduits under the pavement. And they are still at it today, but their tent has moved a few feet down the hill to another manhole.

The walk up the hill towards home was another desperate struggle with me having to stop for breath on several occasions. I was thinking that if I’m like this after just 10 days of being without my hospital treatment, what am I going to be like after 13 weeks? 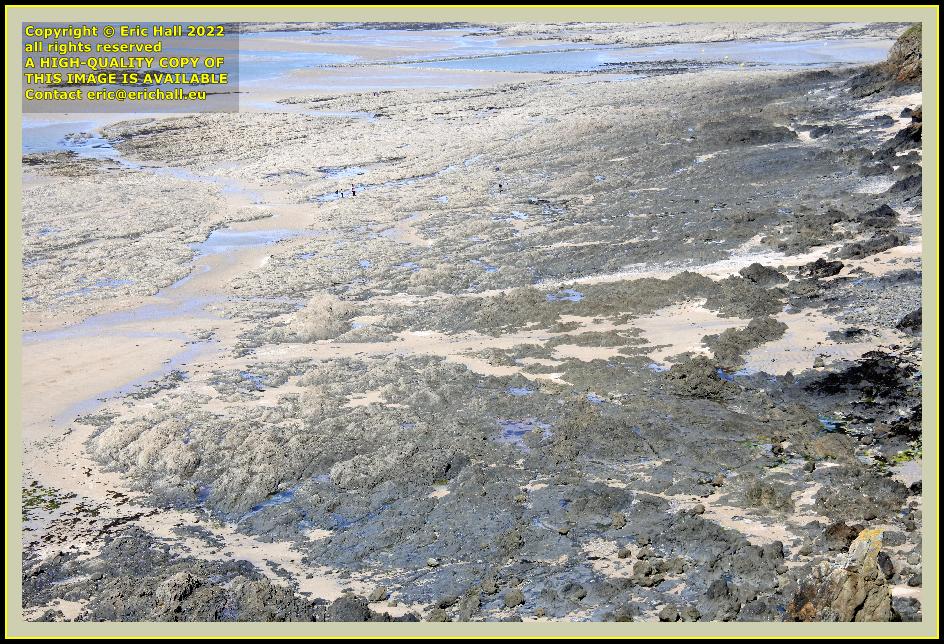 When I (finally) reached the top of the hill, after much binding in the marsh, I didn’t go straight home.

Instead, I went down to the end of the car park to have a look over the wall to see what was happening down on the beach this afternoon.

It had been a lovely day – in fact I’d been out to the physiotherapist in just a tee-shirt without wearing a jacket or a jumper – so I was expecting to see the crowds down there this afternoon so it was rather disappointing to see so few people.

There wasn’t anything going on out at sea either. Mind you, I only had the NIKON 1 J5 with the standard lens so even if there had been something happening, the tide was so far out that I wouldn’t have been able to see it anyway. 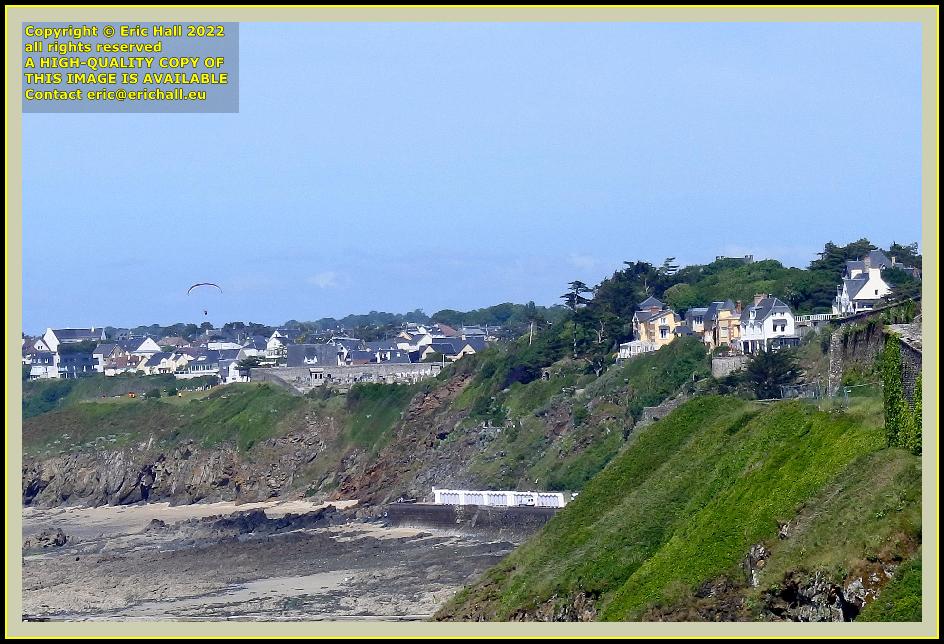 However in the distance there were couple of bird-men of Alcatraz trying their best to take to the air with their Nazguls.

They seemed to be having an enormous amount of difficulty so I waited for a while to give them a chance to approach me but in the end I ran out of patience and went indoors for a strawberry smoothie.

And then I had a listen to the dictaphone to see where I’d been during the night. There was something about spies. We were actually catching a spy in Wales on the Lleyn peninsula. Right at the very end we put his body back in the water hoping that the current would catch it and take it out to sea. There was much more to it than this and I remember thinking that this would have made a really good plot for a book. Then there was Mildred Murfin and two men a bit like the Men from the Ministry. She was planning on going on holiday with them but of course they weren’t used to going on holiday. It was all a bit of a mess, packing and preparing everything etc. One of them turned up at her apartment dressed in his pyjamas saying that he wasn’t going. He didn’t think that it was him so she had to cajole him along to try to take the few final steps to prepare his things ready to catch his flight. They were all typical British holidaymakers of the 60s going abroad with no idea what to expect, no idea what to do or what to take etc, all very naive and all really rather a sad dream watching them try to prepare to leave on this holiday of a lifetime.

There was a married couple, two kids and me somewhere in Central Europe. They were something like a Romany family. We were all going off to stay somewhere in a caravan for 2 weeks. I was driving and I didn’t recognise the car that I had. We were all going to this caravan by the sea somewhere. I can’t remember anything about it at all, what was happening. I know that in the end everyone ended up leaving the car, leaving me in it. There were a couple of little girls who had come to meet the youngest of these two children to go to a dancing class. There was going to be a football match with all the kids against the adults but that’s all that I can remember.

We were listening to a Gospel-rock song by “Arrival” although it was in fact mostly “Alquin” musicians with Dyan Birch singing. For some unknown reason the guitar solo wasn’t what I wanted at all. I had an earlier guitar solo for that track stashed away somewhere so I edited out the guitar solo that was being played and superimposed the one from earlier in its place. I mentioned to the musicians that I’d changed guitar solo and the guitarist was distraught. He was unhappy with his own playing rather than anything else. I explained that it wasn’t a case that the playing was bad, simply a case that it was inappropriate for what I wanted. He was still inconsolable about it but I went ahead and changed the solo anyway. The other group members didn’t seem to be all that concerned at all.

This is about the 6th attempt at dictating this. I’d had all of the motor insurance renewals for France and I’d noticed that the premiums had gone up quite a lot so I’d gone round to the broker’s. They told me that much of it related to the yellow Cortina saloon because with it being parked up the premiums had gone up because some actuary had worked out that cars are more at risk of accidents when they are stationary than when they are actually moving. I thought that that was absolute nonsense. Maybe they disagreed with me but they couldn’t agree with the actuarial report. It was a girl with a cleft palate who saw me so it was very difficult to understand what she was saying. The thalidomide girl was involved in the discussion as well at some point. I learnt as well that they were going to drop down and possess part of my yard where the building was, taking away 1500m² that I owned there so that they could make a by-pass around the town. That was going to be even worse for me because I had nowhere else to keep anything. This was turning into a very bad situation for me. I wasn’t enjoying what I was hearing at all today. The boss was very unhappy with the fact that I was complaining but I thought that I was well within my rights to complain about this kind of thing.

Tea tonight was a burger on a bap with a baked potato and veg – well, only half the veg because the other half ended up on the floor. It’s not my day today, is it?

and the fridge needs defrosting so I’m going to deal with that before I go to bed. One of these days things will start to go right for me, although God knows when that might be.