… just as fed up as I am about hearing about how bad my days are becoming these days. If nothing changes over the next couple of days I’m going to cut out all of these new medications because I can’t keep on going like this.

Just for a change I actually managed to beat the second alarm to my feet. Only just, but I beat it nevertheless.

After the medication I came back in here and that was everything that I remember until 10:27. I was out like a light for almost 2.5 hours and that’s the kind of thing that fills me with dismay. In fact I was lucky that I awoke when I did because I had my Welsh lesson at 11:00 and I needed to prepare everything.

There wasn’t much time but I was actually ready and the lesson didn’t go too badly either. There weren’t all that many of us there either. It seems that numbers are dropping off these days. I wonder how long it will be before they merge our class with another one.

After lunch I had a few things to do and a phone call to make. Rosemary had called me in the middle of my lesson and I needed to call her back 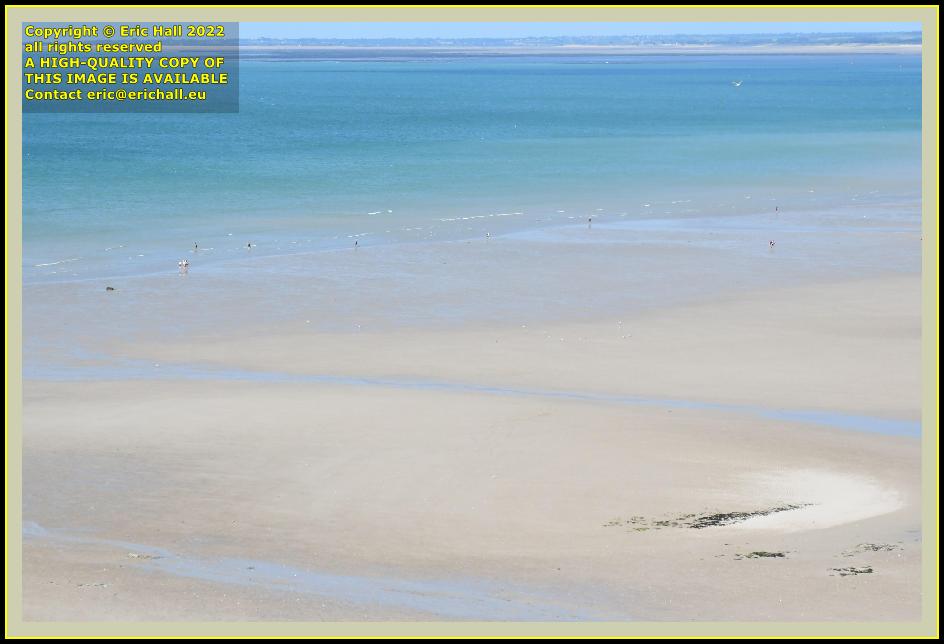 Later on it was time for me to go out for my afternoon walk around the headland.

First port of call was the wall at the end of the car park where I can look down onto the beach and see what was happening down there.

The tide is well out this afternoon and the weather was totally glorious and so I was expecting to see crowds of people down there today. And I wasn’t wrong either.

Surprisingly there wasn’t anyone out there swimming around. If any day was going to be suitable for going in it up to your neck, it would have been today. It was actually 25°C when I went out. 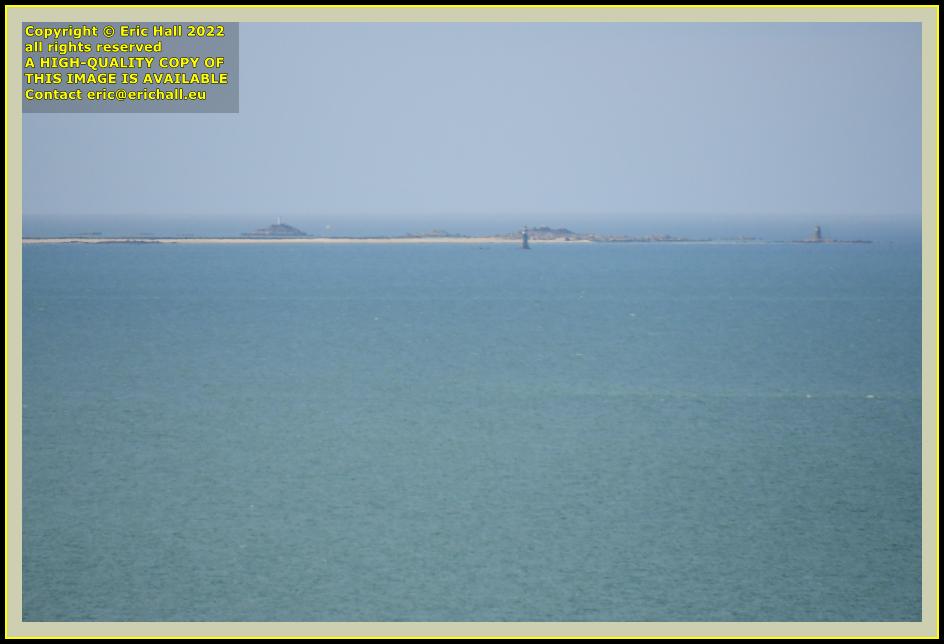 Sometimes when the tide is right out and the sun is shining, the beaches on the Ile de Chausey are quite clearly visible.

And today was one of those days. The beaches were looking marvellous. Regular readers of this rubbish will recall that a couple of years ago when went off on our week away on the Spirit of Conrad we spent a night on board in that lagoon over there and a morning lounging about on the beach.

You can tell how high the tide comes in too by looking at the pillars on which the marker lights are installed. When the tide is in those lights are barely above the water. 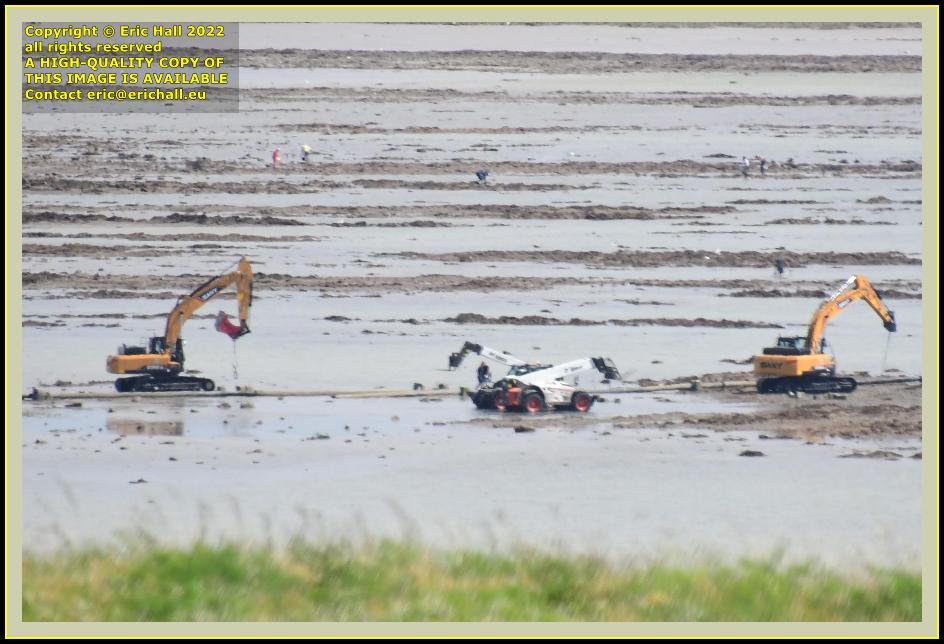 There weren’t all that many people on the path this afternoon so I had it pretty much to myself.

But when I arrived at the car park at the end I could see the diggers and the other heavy machinery out there working.

Even though I can’t really see what they are doing, they have come quite a long way with this pipeline that they are laying. It looks without any doubt that that they are taking it down to below the level of the lowest tide.

Mind you, having seen some of the storms that we have in the bay I wonder how long the pipeline will last before the storm rips it out again. 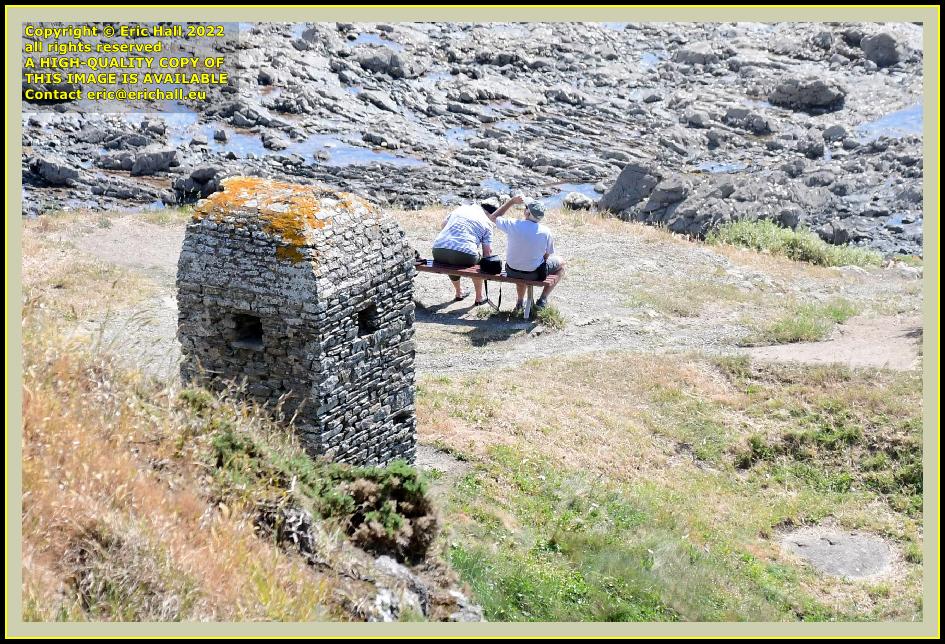 And whatever it is that they are doing out there, they have something of a crowd watching them doing it.

There were a few more people sitting on the bench by the cabanon vauban admiring the machinery and the work that they were doing.

There wasn’t anything going on out at sea though. There wasn’t a single boat that I could see this afternoon. Some are tied up in port and the rest of them are right out in the bay fishing.

And so with nothing to detain me here I pushed off down the path on the other side of the headland towards the port to see what was going on there this afternoon. 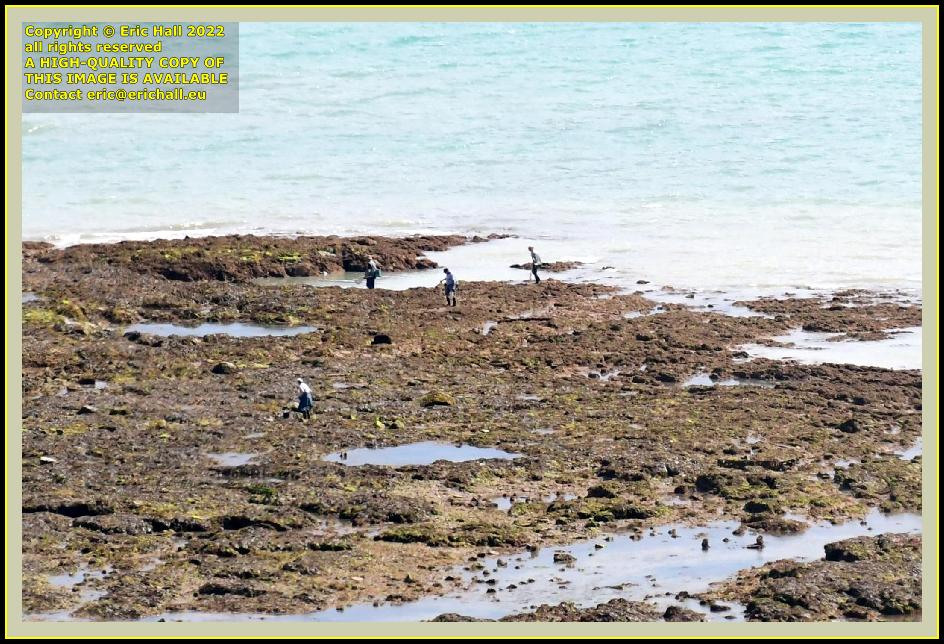 As well as the plant and machinery out there in the bay there were other things that the people on the bench could admire, even if there were no water craft of any description out there.

With the tide being so low right now, the public ares of the beach are uncovered and so the crowds are out there this afternoon with their buckets, spades, gratters and other equipment seeing what they can harvest from the rocks.

You need something good and strong to prize to shellfish from the rocks because usually they cling like … errr … limpets. It’s what I suppose you would call “flexing your mussels”.

It’s not really a thing that interests me but regular readers of this rubbish will recall that we broadcast a live radio programme from down there a couple of years ago. 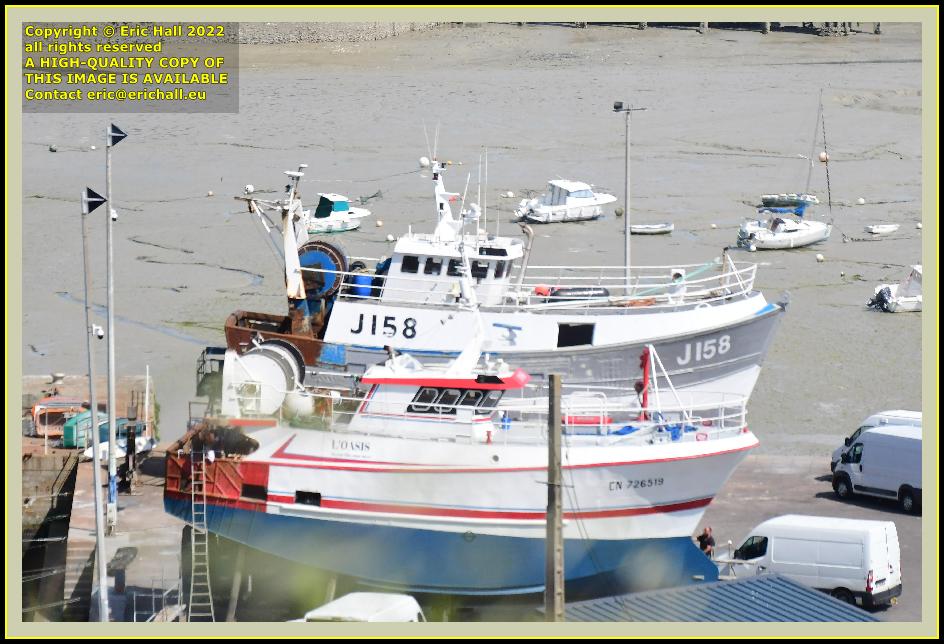 As I walked past the chantier naval I noticed that there had been yet again anothe rchange of occupancy today.

L’Ecume II is still there of course but I can’t see if Valeque is still there because in the way blocking my view is a completely new trawler whom we haven’t seen before.

She’s called L’Oasis and her registration number tells my why she’s new in town. It begins with “CN” and that seems to suggest that she’s registered in Caen.

All of the trawlers that sail out of Granville have registration numbers beginning with “CH” tat tells us that their port of registration is Cherbourg. 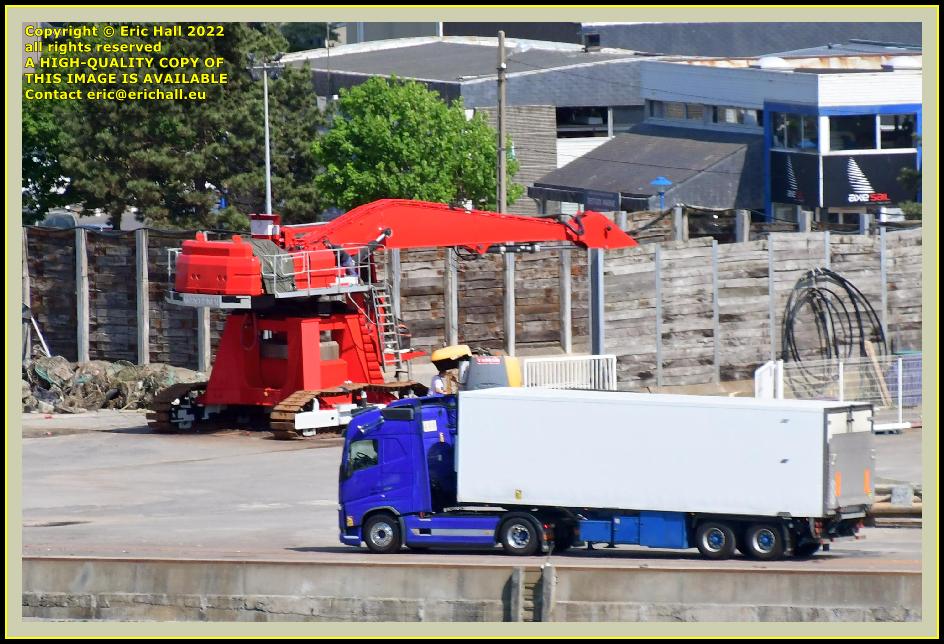 One thing that I wanted to do was to have a closer look at the crane that I mentioned yesterday.

There’s a better view from here, but it still doesn’t tell me very much. It’s a “Mantsinen”, the same as the other one, but the name has been painted out. And even though the paintwork looks new, the tracks look old and used.

There are also a couple of guys working on it this afternoon too. All of this seems to suggest that it’s the same one that was here before but is in the process of being overhauled at the moment.

All will become clear over the course of the next few days, I reckon. 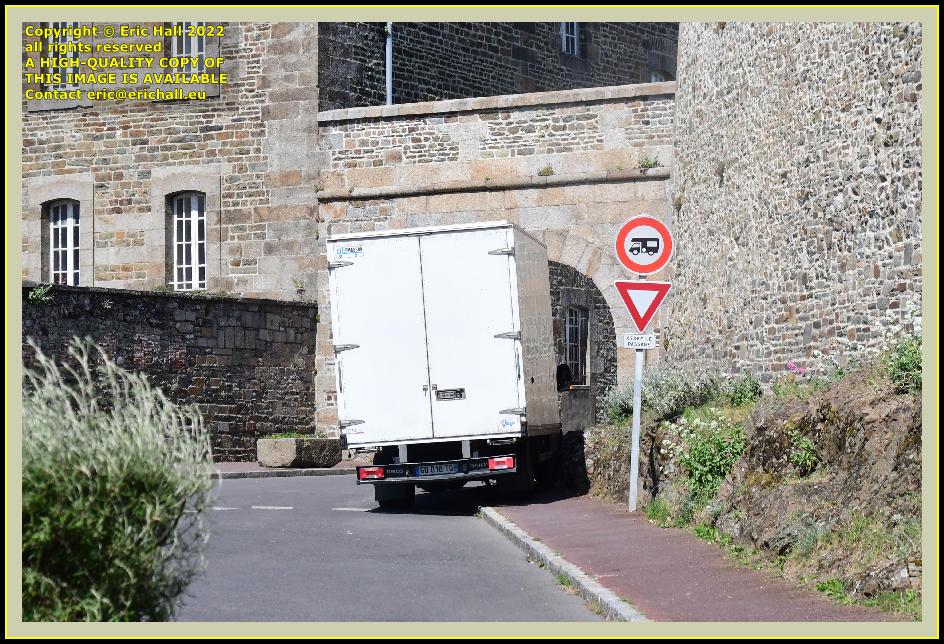 One of the things that I’ve mentioned before … “and on many occasions too” – ed … is the difficulty of moving things around when you live in a medieval walled city.

Many of the delivery vehicles are too tall to pass underneath the gate and into the city so they have to park up while they work out a way of trans-shipping the articles to their destination.

Back here I had a milk shake and then did some work. There was some stuff on the dictaphone so I transcribed all that. It was something like a scene from CONVOY

. A whole group of truckers was on the run again. What they were actually doing was that they had something to do with buffaloes, a ranch or something where they were rearing buffaloes from eggs. It was a whole really complicated scenario there about these eggs, how they were recuperated, how they were hatched artificially into more buffaloes etc. This was a real technological marvel and the IRS was involved in it. It was such a complicated system of rearing these eggs that the whole world’s attention was focused on what was going on here insofar as it affected these truckers who were in dispute with their Government. It was easy to see how they were being prejudiced against when they even saw churches that were totally ruined still doing things to support the Government by opposing the lorry drivers’ movement. We saw one new church where all the members had been arrested even though they were no danger to anyone about anything. It was only the power of these truck drivers that was keeping them out and their interest that this project with these buffalo eggs had created.

And then I was in one of my old offices and I bumped into my old boss Norma. She said “I have,’t seen your time sheets for ages, Eric. Do you have them?”. I replied “yes, they are on my desk”. She said “could you let me have them by Friiday?” We had a long chat about this and that. Then I went out into the main office to find my desk. I had STRAWBERRY MOOSE with me. Someone asked where I was on Saturday. “We didn’t see you in here”. I asked “why didn’t anyone tell me that there was overtime on Saturday?”. “Well, you should have known” was the reply. When I reached my desk there was no chair there so I had to hunt round the office for a spare chair. In the end someone made some kind of underhand comment about where there was a chair so I went and found one and put it back. It was covered in dist so I had to tip it out and clean it. While I was sitting there one of the other girls came over and asked “what’s the matter Eric? Are we friends or something?”. I replied “nothing’s changed as far as I know”. They seemed to think that I was offended by something or upset by something which I wasn’t really. It was just my normal usual grouchy self but they seemed to have it in their heads that for some unknown reason I was upset or offended. I couldn’t seem to persuade them otherwise.

That took me right up to tea time. There was some stuffing left over from yesterday so I had another delicious taco roll with rice and vegetables.

So now I’m off to bed. Hopefully I’ll have a good night and a decent start tomorrow as I’m sick to the back teeth of all of this.