Not that that’s any surprise because after my totally messed-up weekend and a 06:00 start this morning, it was pretty much odds-on.

Not that I’m complaining of course, even though it might sound like it. I take my days as they come and take what’s given to me. I really wanted to do that Welsh weekend course and so I have to accept the baggage that comes with it.

No-one was more surprised than me to find me half-way out of bed when the alarm went off at 06:00. And I even managed to be up and about before the second alarm went off.

After the medication I came back in here to make a start on today’s work but rather regrettably I fell asleep almost immediately. In fact I was out like a light until almost 08:00. In fact, for all the good that I was doing I may as well have stayed in bed.

When I’d finally come round I grabbed a quick coffee and then attacked the radio programme and that took me all the way up until 12:30 this morning before it was finished. I really wasn’t doing very well

There was time for a shower and a good clean up and then I made my butties with some of that delicious bread that I’d baked yesterday. 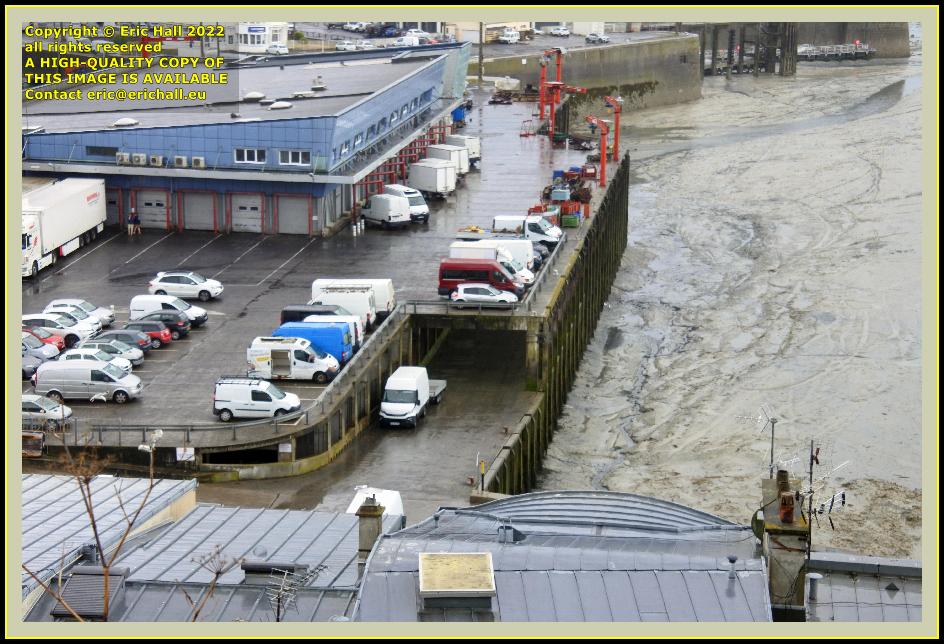 As usual, the first place to go when I went outside was to the viewpoint on the corner onfthe Boulevard Vaufleury and the Boulevard des 2E et 202E de Ligne.

And for a change there was no-one parked up down by the fish processing plant. Not even L’Omerta. She’s forsaken her usual spot for a change and gone off to see what she can catch out at sea.

And have you noticed the weather? We had a torrential rainstorm for about 15 minutes yesterday afternoon and it looks as if we have had another one while I was asleep just now. The weather is all wet, grey and miserable.

Not that that’s any surprise, because so am I 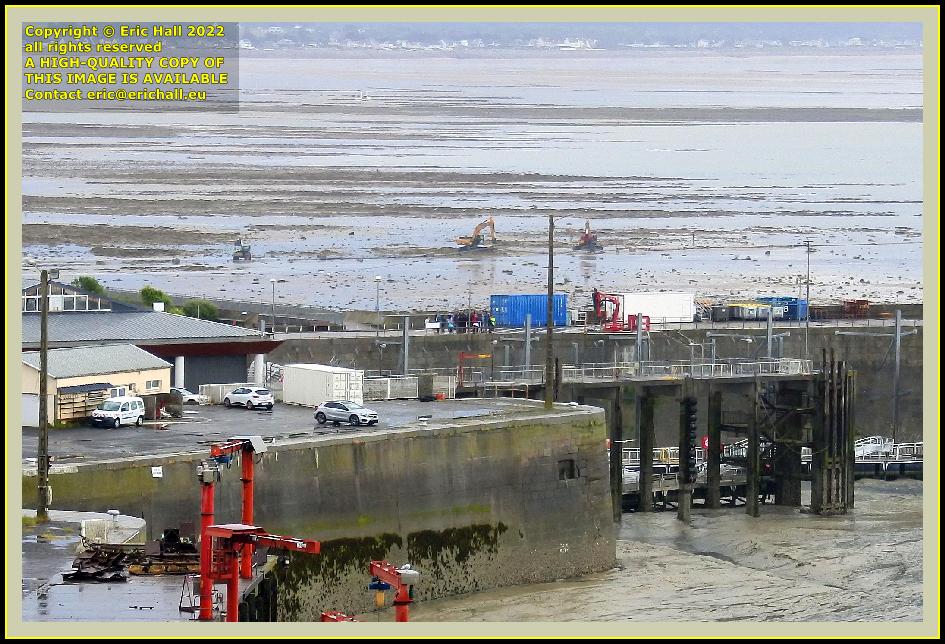 On thing that we see every now and again is something to do with the laying of a drain out of the port de plaisance into the open sea.

By the looks of things they are back there again today. They have a couple of diggers out there this afternoon working away. It’s not actually all that easy though to see what they are doing and the standard lens on the NIKON 1 J5 doesn’t help things any.

What I’ll have to do is to go by with the big NIKON D500 with the 70-300mm LENS tomorrow and see if that gives me a better clue.

From there I headed off down the hill towards town. 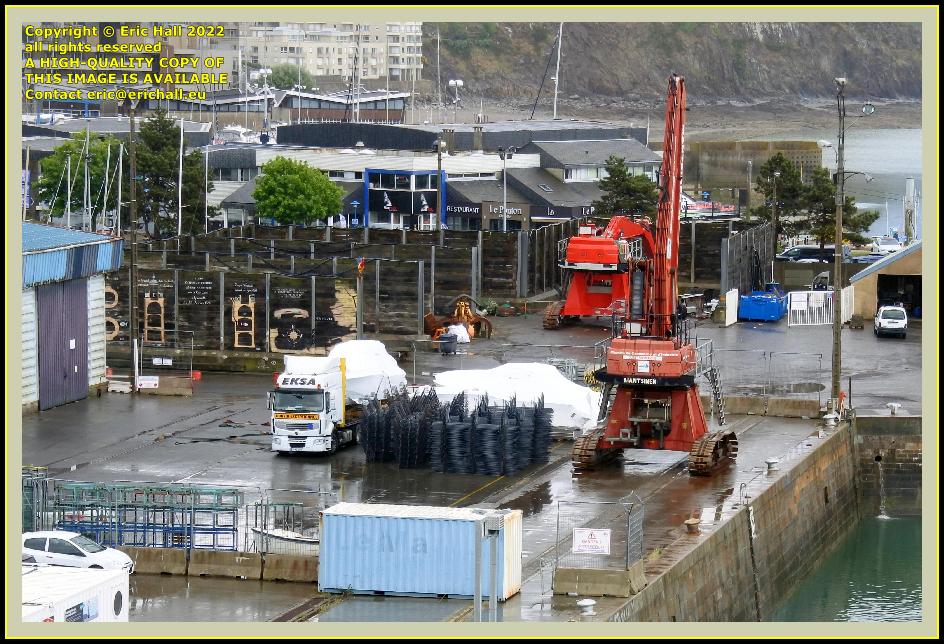 At the viewpoint overlooking the inner harbour I was lucky enough to catch sight of another hive of activity.

We’ve seen a shrink-wrapped speedboat down there for a couple of days, but today there’s a lorry delivering another one to add to the collection of stuff on the quayside to be taken over to Jersey by one of the little freighters.

My attention was also caught by the crane over there at the back of the loading bay by the old gravel bins. That looks quite new to me, unless they’ve overhauled one of the ones that was here before. If it has been overhauled they have done a good job because it’s much cleaner than it was before. 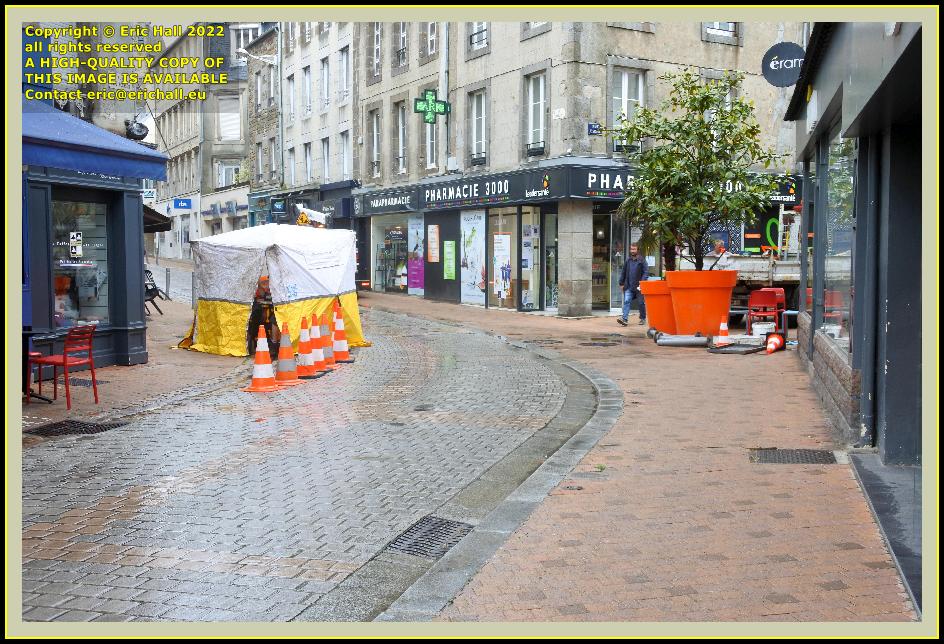 There have been notices all over town telling us of power cuts this afternoon.

On the corner of the Rue Paul Poirier and the Rue Couraye I caught up with them at one of their work sites. Apparently the work is due to go on into the evening.

The climb up the hill was awful. I wasn’t feeling in the least bit like it and it seems today as if I have gone backwards by about 6 months.

But when I was there she put me through my paces again. She’s certainly working me hard enough, much harder than the others did. Here’s hoping that it’s doing me some good.

After she threw me out I went to Lidl – eventually, because it was a nightmare going up the hill to the top. To think that there used to be times when I would sail up there like a galleon in the Spanish Armada.

At Lidl I spent a bit of money buying a few things and then headed for home. 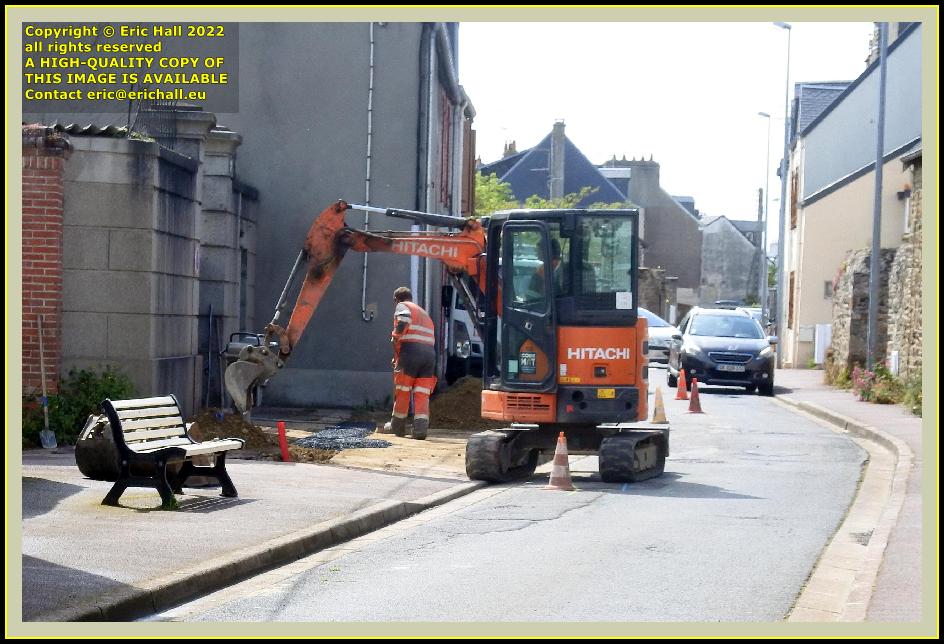 Myy route home from Lidl is a different way to the way that I came, so I hadn’t seen these roadworks until I left the shop.

They’ve been digging a trench with the digger and were now busy filling it in so I couldn’t see what they had been doing with the trench.

But I was more interested in watching the digger driver. Of course I can drive and operate a mini-digger – I used to own one until recently – but I couldn’t drive mine the way that this guy was driving this one.

It was something rather like a ballet and it was most impressive. I was in half a mind to give him a round of applause when he finished. I was quite jealous. 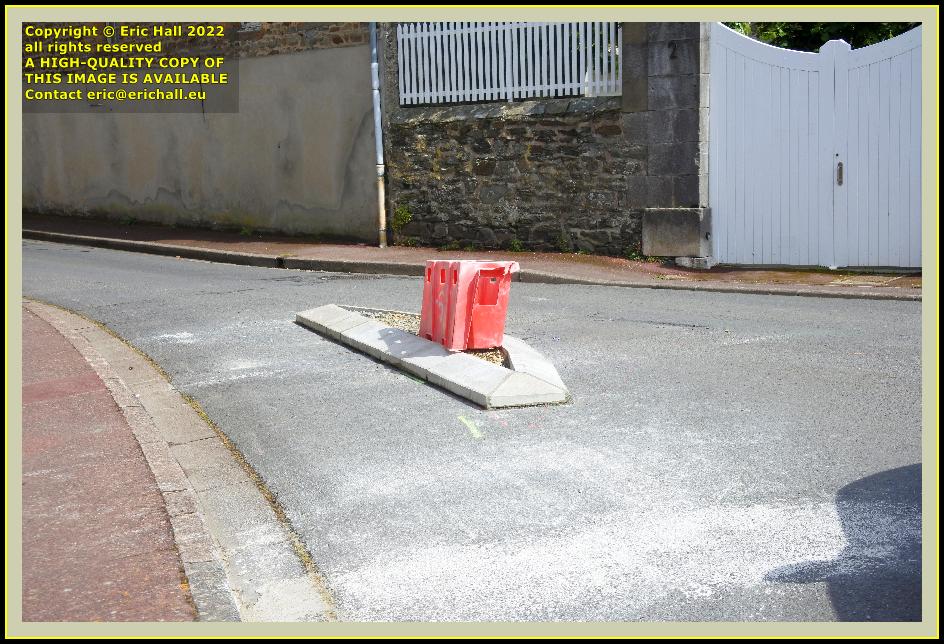 Further on down the Rue de la Houle I noticed that they’ve been installing something of a cycle lane here.

They are spending a fortune on facilities for cyclists in the town and we have seen several examples thereof just recently, but I have a feeling that much of this is going to be money wasted.

The truth is that Granville is not a cyclists’ town. As regular readers of this rubbish will recall, it’s all “up-and-down” and that’s not the best terrain for cyclists. In fact there are parts of the town that are used as endurance trials during the Tour de Normandy cycle race.

That should give you some idea of what the streets are like around here. 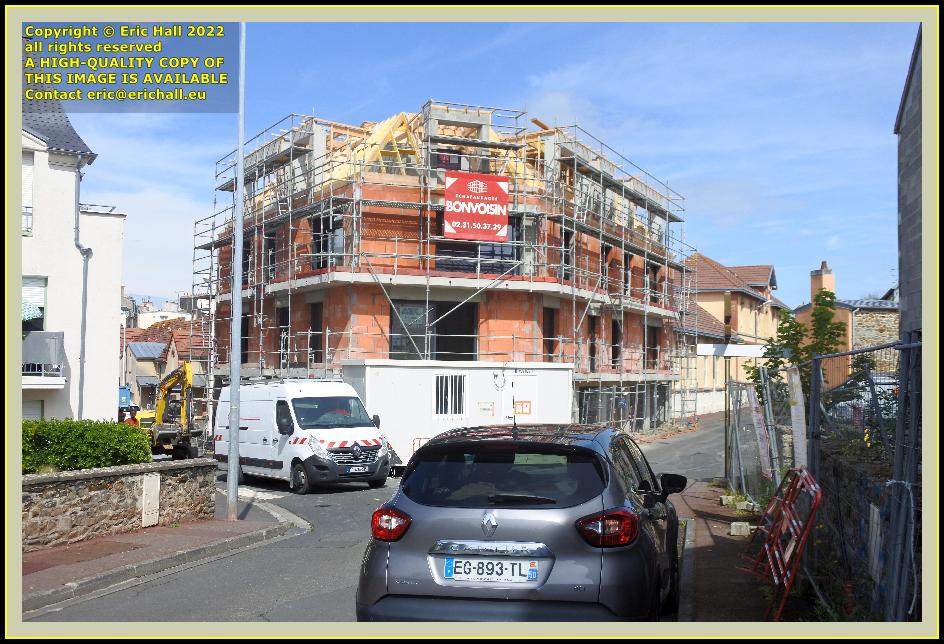 Regular readers of this rubbish will recall that we4ve been following the adventures of the new building on the corner of the Rue Victor Hugo and the Rue St Paul.

They have made a great deal of progress just recently. The roof is going on and the crane that has been there since July last year has now been taken away. It looks as if they might be finishing it some time soon if they aren’t careful.

From there I carried on down into town where I bumped into one of my neighbours and then staggered up the hill towards home, having to stop on several occasions to catch my breath and, on one occasion, to brink a can of energy drink.

That’s the kind of state in which I find myself today. 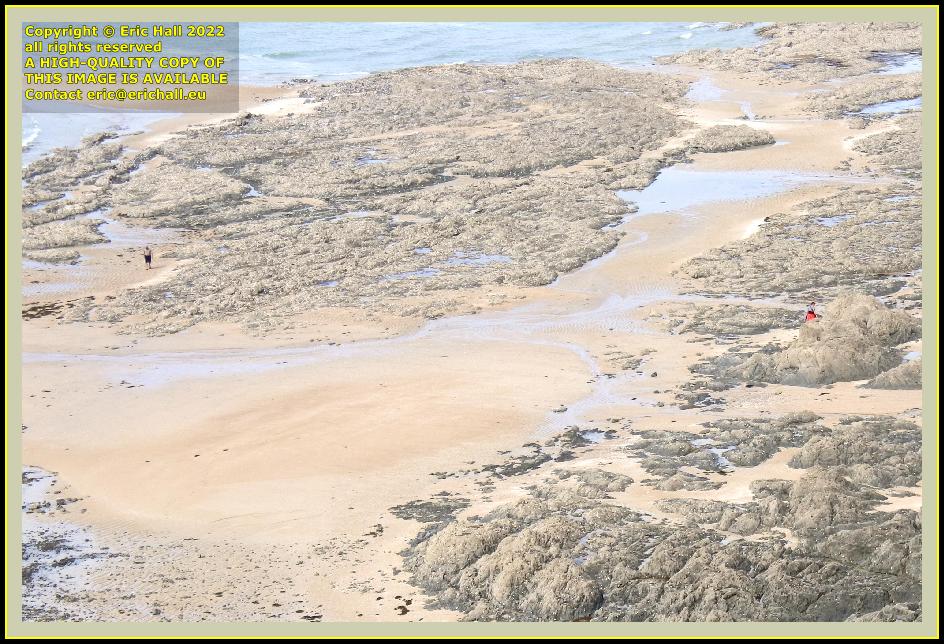 The weather had brightened up by now so I went to look down onto the beach to see what was happening.

There wasn’t a lot happening there right now though. Just one or two people. The bad weather earlier seems to have put the rest of them right off coming out today.

Back here I had a coffee and then collapsed into a chair, feeling absolutely awful. It’s a long time since I’ve felt as bad as this.

But I did manage to listen to what was on the dictaphone from last night. There was something about moving a squadron of lorries across the border in northern France. My friend from the Wirral was there at one point. I can’t remember very much about this particular dream at all. Then I was in Canada. I’d just hired a car and had an accident in it and that was before I’d picked up my temporary Canadian driving licence so they had to hurry up and issue my Canadian driving licence extremely quickly. In the meantime I had to go and wait over by the Sheriff’s office to tell them to come along and deal with it. It was in a terrible state, more untidy than mine. Some big, fat lady came over and asked me what I was doing. I explained so she went and rolled over onto a settee and lay down there and went to sleep leaving me amongst all these cameras and guns etc while they sorted out my driving permit.

Tea should have been a stuffed pepper but the pepper was no good so it ended up being a taco roll.

And now I’m off to bed. I have a Welsh lesson tomorrow so I need to be at my best but that’s unlikely the way that I’m feeling right now.