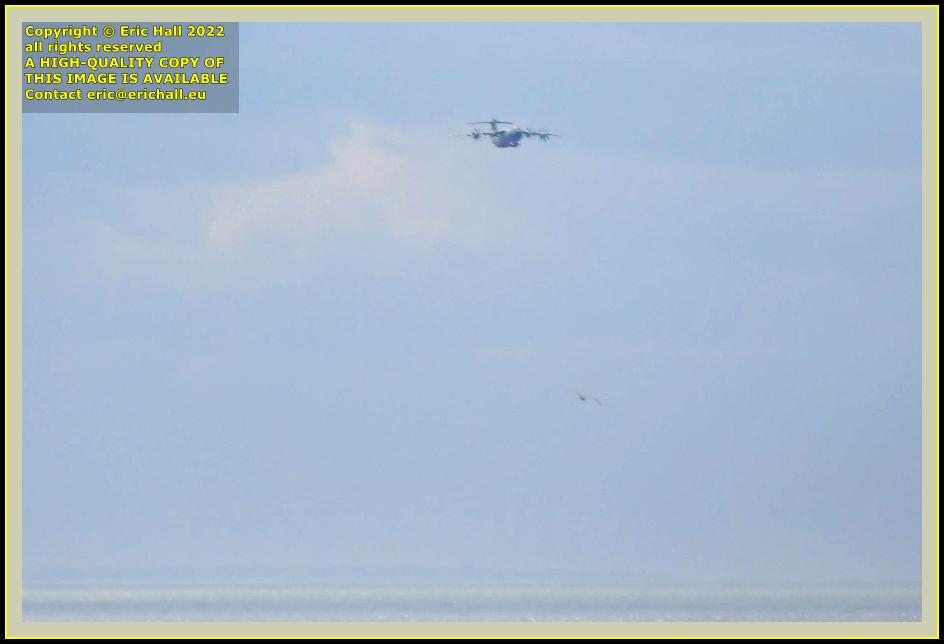 It’s been one of the worst that I’ve had for quite some considerable time, I’m sad to say. So while you admire a few photos of the flight of Airbus A400M aircraft that flew by overhead I’ll tell you all about my sad, sorry tale.

It’s probably something to do with the fact that the medication that I take before I go to bed must have kicked in. i was out like a light almost as soon as my head hit the pillow and that was that. An earthquake could have occurred and a bomb could have gone off but nothing would have awakened me. 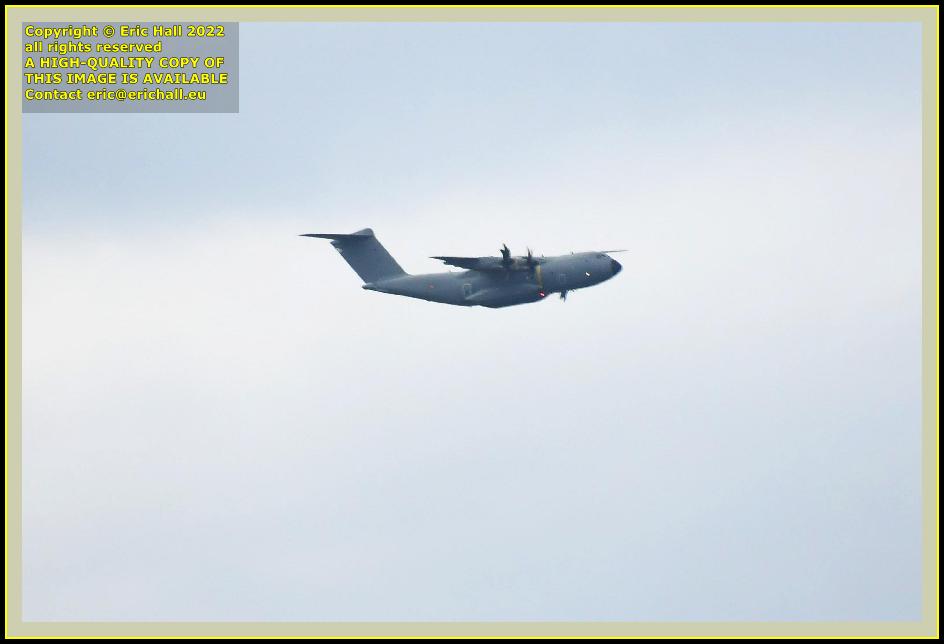 The way I was feeling this morning I wouldn’t even have crawled out of bed for Jenny Agutter and Kate Bush, never mind TOTGA, Castor and Zero. It was 10:25 when I finally summoned up the energy to leave my stinking pit, and I was feeling like death.

It goes without saying that there was nothing at all on the dictaphone, and it’s been a long time since that’s been the case. I really was absolutely out of everything last night. And that’s probably the most disappointing part of everything from last night and this morning. 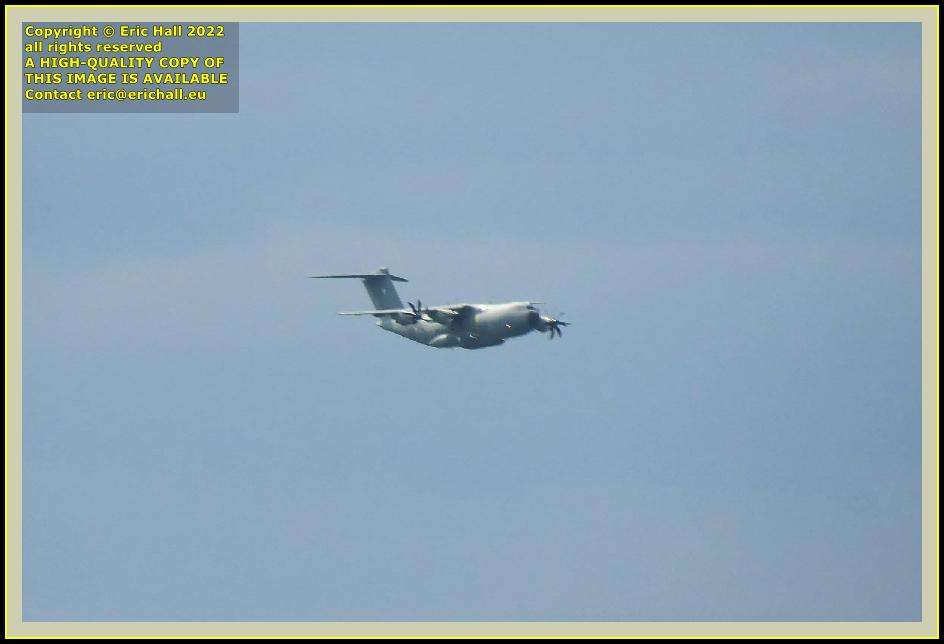 Once I’d had my medication and breakfast I came back in here but I was in no fit state to do any work. I spent the morning vegetating all the way up to lunchtime.

For lunch I had the last helping of the leek and potato soup and it was just as delicious as it was when it was fresh. In fact it was probably better with all of the spices having marinaded in.

Just as I was finishing my soup Rosemary rang me up and we had another lengthy chat. She was keen to know how Paris went because we’d talked about it beforehand, and I was keen to hear about her Ukrainian refugees.

But the bad news is that they haven’t arrived. They’ve been caught in a Covid trap and are currently in isolation somewhere along the route. 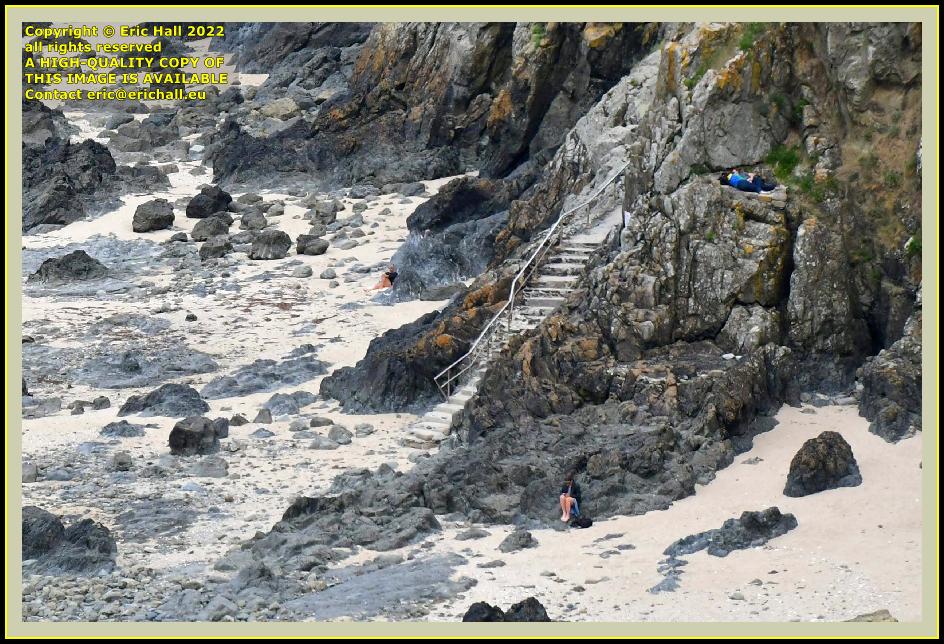 After we finished it was time for me to go out for my afternoon walk, even if I didn’t feel at all like it.

First stop was the wall at the end of the car park where I can look down onto the beach to see what is happening there.

The weather had turned today. It was a lot cooler than it has been so I wasn’t expecting to see many people out there, even if it was school half-day. And there can’t have been more than a dozen people down there this afternoon.

What did catch my eye though was the couple perched up on the rock just to the right of the steps. 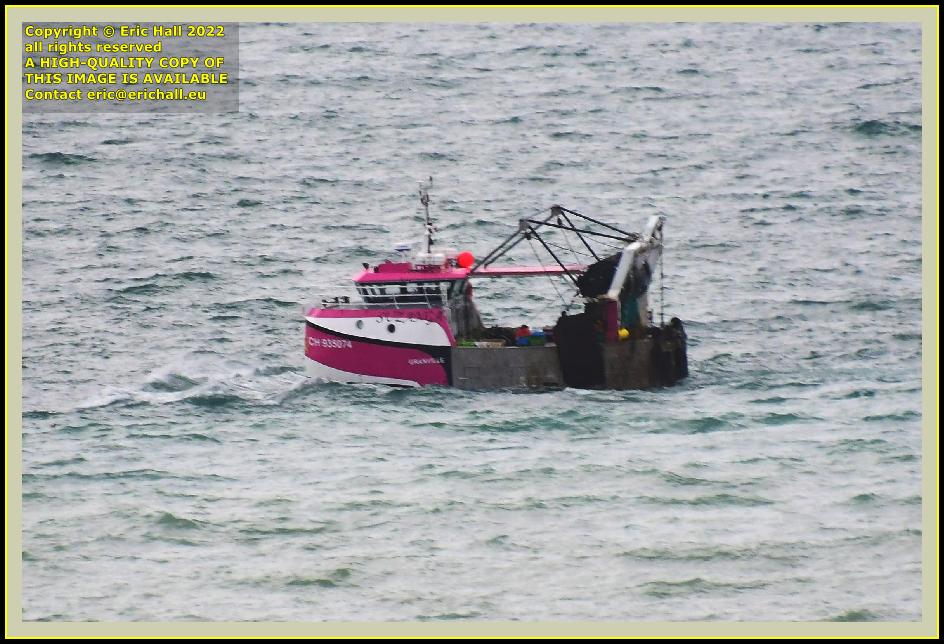 Having dealt with all of that I headed off down the path towards the lighthouse.

No Nazguls out there this afternoon but we did have one of the trawlers on her way back in to harbour. She’s Suzanga, the newest of the trawlers in port. We first noticed her coming into port in August last year.

Not very many people on the path either this afternoon. I was pretty much alone out there as I admired the flight of Airbus military aircraft that went flying past out at sea. Far too far out for me to be able to read their serial numbers and not having brought my ‘phone with me, I didn’t have a radar on which to pick them up. 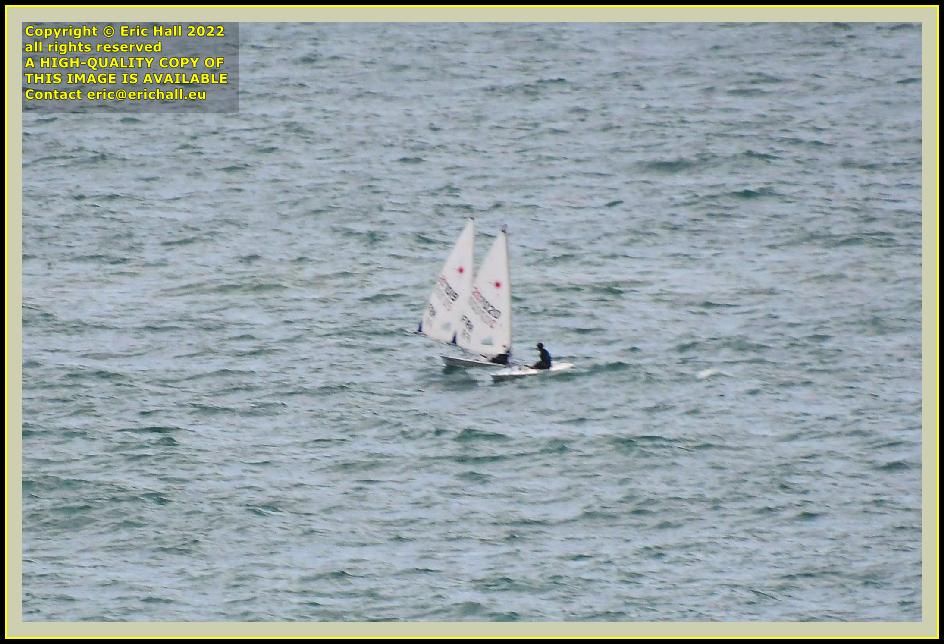 My walk took me across the car park to the end but there was no-one today sitting on the bench down by the cabanon vauban this afternoon so I didn’t wait around.

There wasn’t a great deal of activity out at sea either. We’ve seen Suzanga of course and out in the Baie de Mont St Michel there were a couple of yachts having a bit of a sail around the bay. And that really was about it.

At fist I thought that it was a catamaran and I had tio look twice to make sure.

So I set off down the footpath on the other side of the headland heading towards the port to see what was happening down there this afternoon before I went back home for my drink. 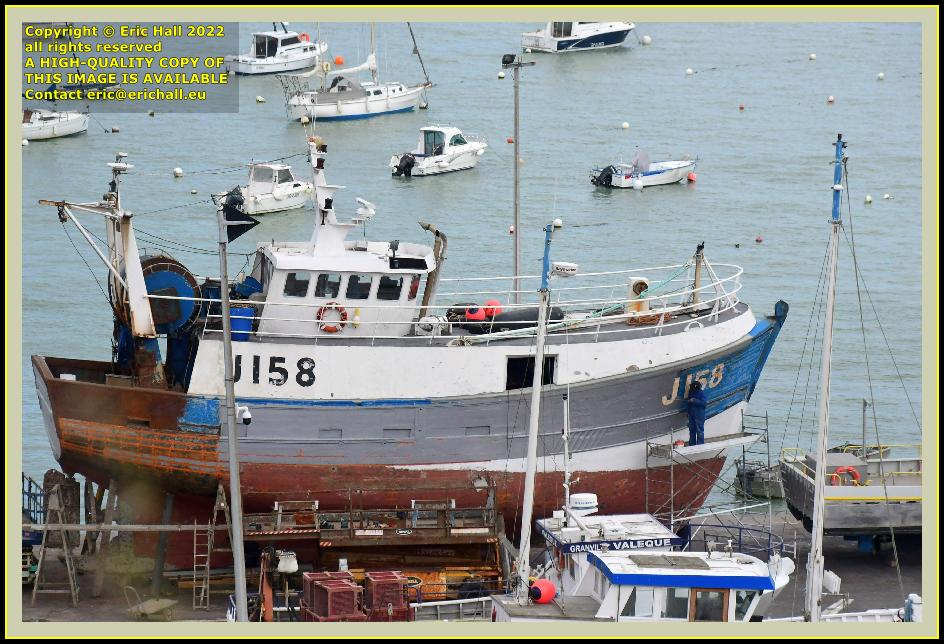 There was a great deal of activity taking place in the chantier naval this afternoon and almost all of it was centred around L’Ecume II.

We’d seen it the other day looking in rather a sorry state but they’ve been hard at work having stripped off much of the perished paintwork and primed it. But there’s plenty to go at and they’ll be there for a little while yet smartening her up.

Dodging the classe decouverte walking in a queue-lieu-lieu, or “single file”, I carried on down the path towards the inner harbour because I’d noticed that away in the distance I’d seen Thora, one of the little Jersey freighters, tied up at the quayside. 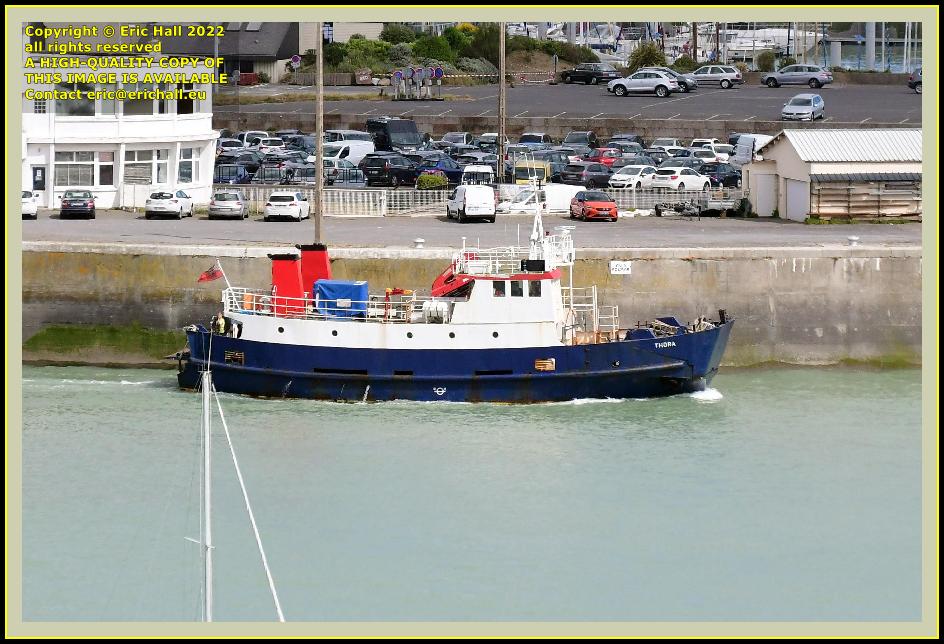 However as I drew closer, she slipped her moorings and headed off towards the gate and the open sea.

As she passed through the gates I ambushed her with the camera and took a photo as she headed off back to Jersey. I’ve not taken a decent photo of her for quite a while.

But I didn’t relax for long because I had things to do. I have to do some work today even if I don’t feel like it at all. 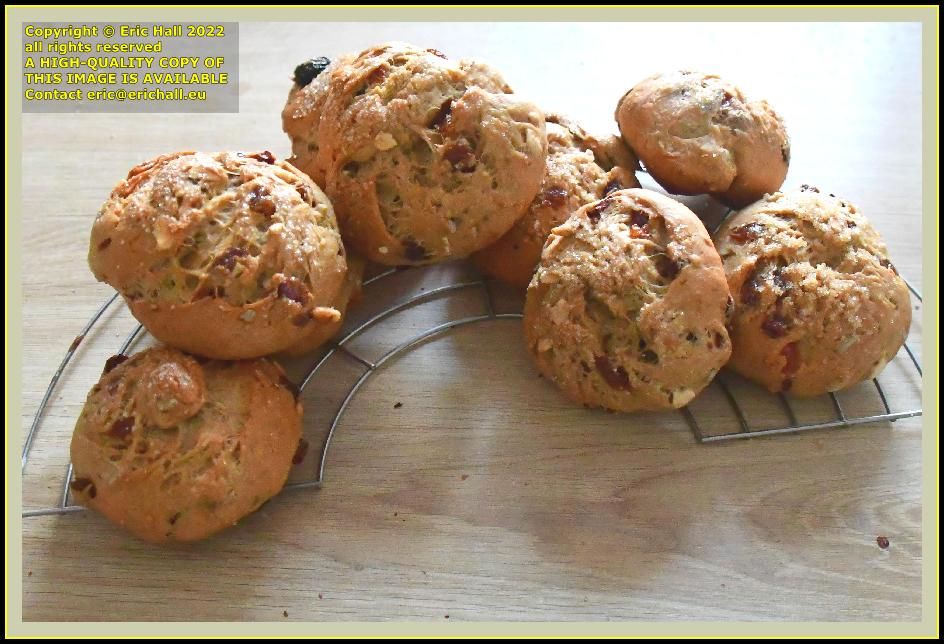 Having eaten the last of my fruit buns this morning I needed to make some more.

So 250 grammes of flour, some dried fruit, a banana, piles of other stuff (and I forgot the dessicated cocount) all went in there and for a change it all mixed up quite nicely.

When I was satisfied with it I divided it into 9 buns and put them in the oven to bake for 40 minutes. And I do have to say that they look, and smell, delicious.

As for what they taste like, you’ll have to wait until tomorrow for me to tell you that. But I do reckon that they will be among the best that I have ever baked.

Tea was veggie balls with steamed veg and vegan cheese sauce and it was delicious. And now I’m going to have another go at going to bed. And hoping for a better morning. I have an appointment with the sports therapist tomorrow so I’d better be up and about quite early for that. No lying about stinking in bed.