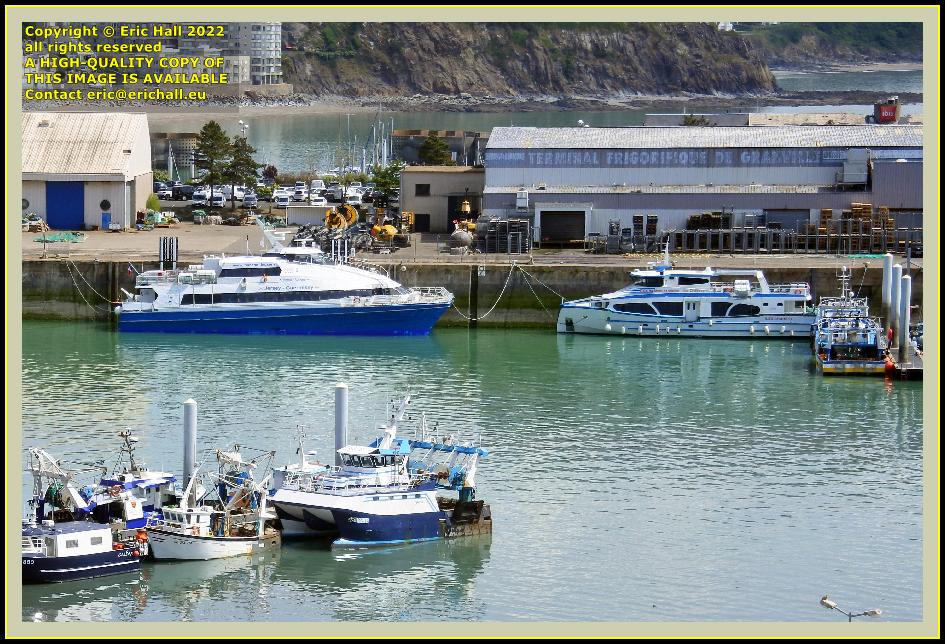 Over there moored at the quayside is Victor Hugo, one of the two ferries that run out to the Channel Islands. As I mentioned a few weeks ago, the service from Granville restarted on the 5th of May after a break of over two years (with the exception of one very short week).

There was this worrying feeling that with the end of the gravel boats and the cancellation of the Big Wheel, the ferry to the Channel Islands would be the next thing that this mayor would cancel in his valiant attempt to turn the town into some kind of haven for luxury retirees rather than a working, bustling seaport.

And so I for one am more than pleased to see the service restart. 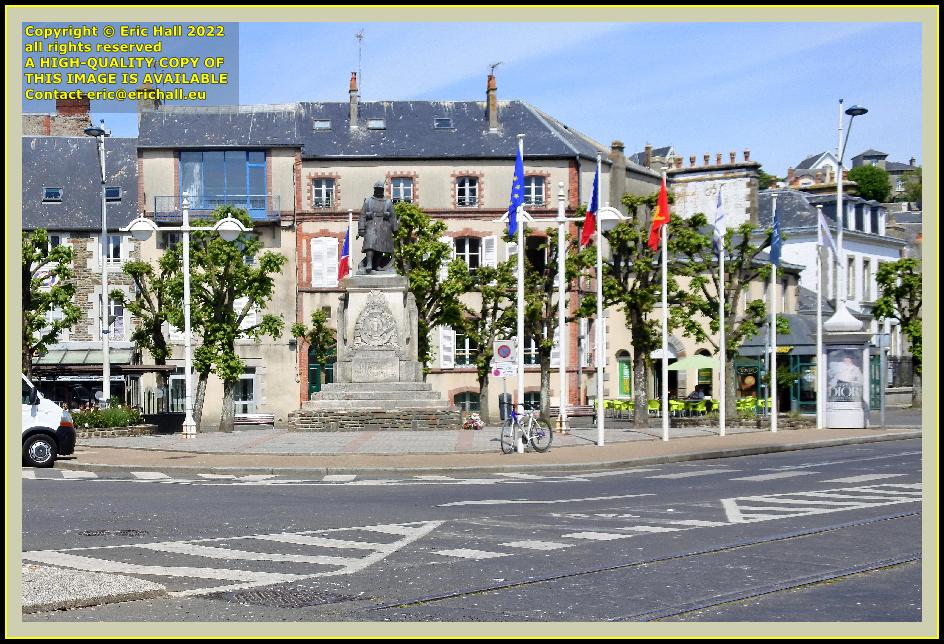 But what comes with one hand goes with the other.

On Saturday I made the remark that the kiddies’ roundabout was back in the Place Charles de Gaulle during the outdoor market. But today, there it was! Gone! And never called me “mother”!

Never mind “musical chairs”. That roundabout is certainly doing the rounds a darn sight quicker than I can keep up with it.

Anyway, last night despite going to bed rather later than I intended, I still managed to be up and about “fairly shortly” after 06:00, beating the second alarm rather comfortably even if I didn’t feel much like it.

After the medication I had two radio programmes to prepare. I’d written the notes while I was in Leuven last week so that saved me some time but even so, it still took an age to complete everything. It wasn’t until 12:35 that both programmes were finished.

There had been a few pauses during the proceedings of course. I felt that I had the kind of thirst that you could photograph so I had several mugs of coffee during the morning, as well as stopping for breakfast.

And then the nurse came round to give me my injection for today.

When it was finished I made myself a big bowl of leek and potato soup. There was a big frozen mass of leeks in the freezer that weren’t doing much and having been brought several packs of hot cross buns last weekend seeing as I had run out, I needed to make some space in the freezer

While that was cooking I went and had a shower and a clean-up. And then filled the washing machine ready for when I go out later. I’m running out of clothes again.

The soup was delicious. Nice and thick and creamy and there’s enough for three days in total. And I’ll have to make some more some other time. The cumin and tarragon in it gave it an additional bite. 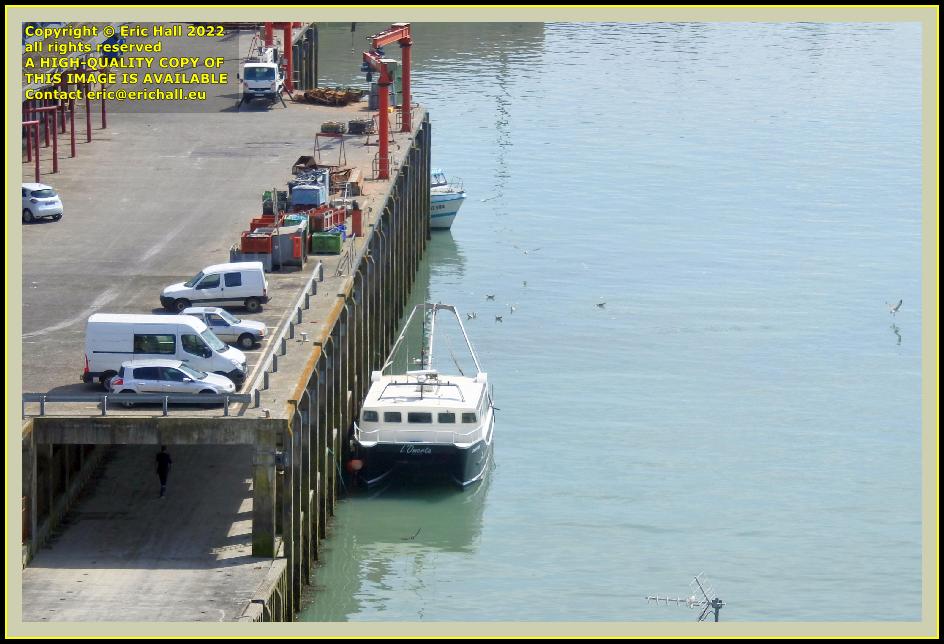 First thing though was to stop at the viewpoint on the corner of the Boulevard Vaufleury and the Boulevard des 2E et 202E de Ligne where I can look down on what’s going on at the fish processing plant.

And as you might expect, L’Omerta is still tied up there. It looks as if she’s moved in there permanently now. Mind you, the other boat that was there yesterday, Petite Laura, she has moved away. There’s another boat tucked away around the corner but I can’t see who she is.

There were plenty of seagulls floating around down there too, waiting for some shellfish to drop off the quayside. 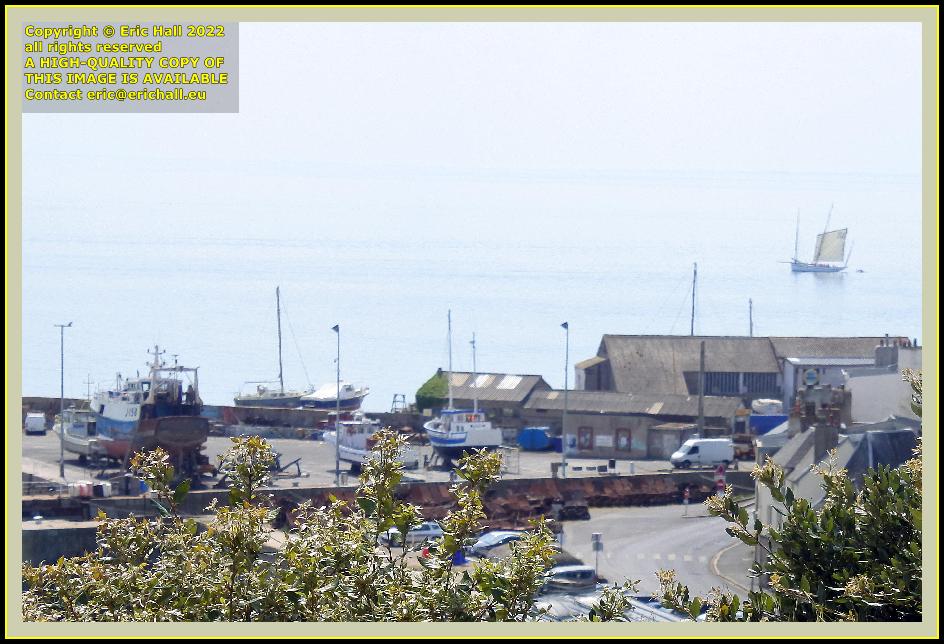 There was plenty of other excitement going on out there this afternoon.

My attention had been caught by the boat that was over there out at sea. Even though we can’t see her registration number at this distance, my money is on her being G90 – La Granvillaise. The shape of the lasts and the sails, even if they aren’t all unfurled, would seem to indicate that

And there’s still plenty of activity in the chantier naval. From left to right we have an unidentified boat, then L’Ecume II, Valesque, and then another unidentified boat. By the looks of things Le Roc A La Mauve III has finally gone back into the water after all this time. 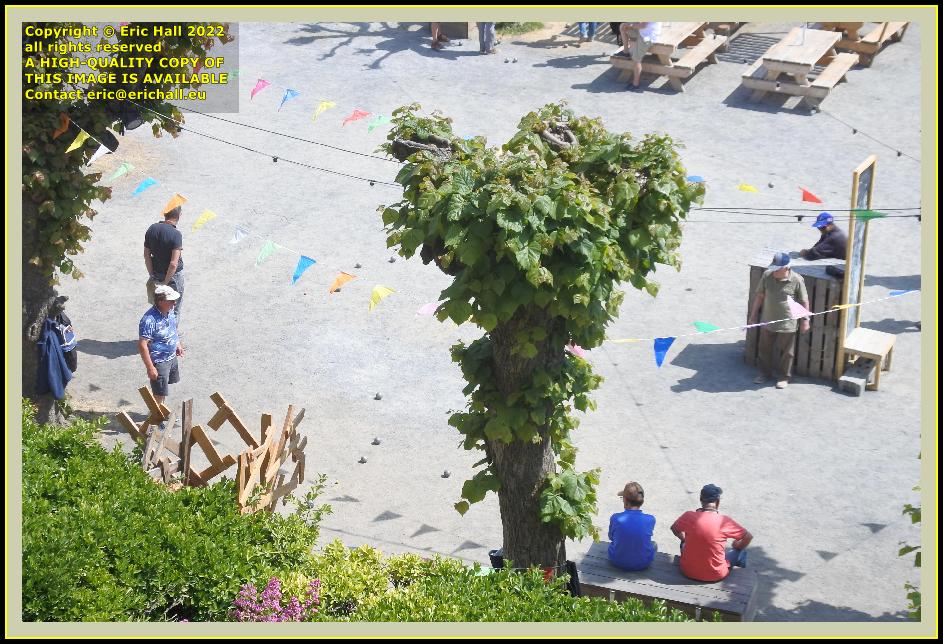 My route into town took me down past the Place Pelley and the Bar Ephemere.

When we came past here on Saturday there wasn’t anyone down there playing boules, which took me by surprise because it seems to be an unstoppable national sport. But they are making up for it today. There are plenty of boulonauts down there right now.

The walk up the hill was strangely difficult today, and I don’t know why that might be. It might have been quite warm outside but nothing else had changed.

And starting today I have a new physiotherapist. She took my X-rays and MRI Scans and then put me through several tests before giving me a few exercises.

At least having all of these different people means that I’m having all kinds of different tests and that can only be a good thing. 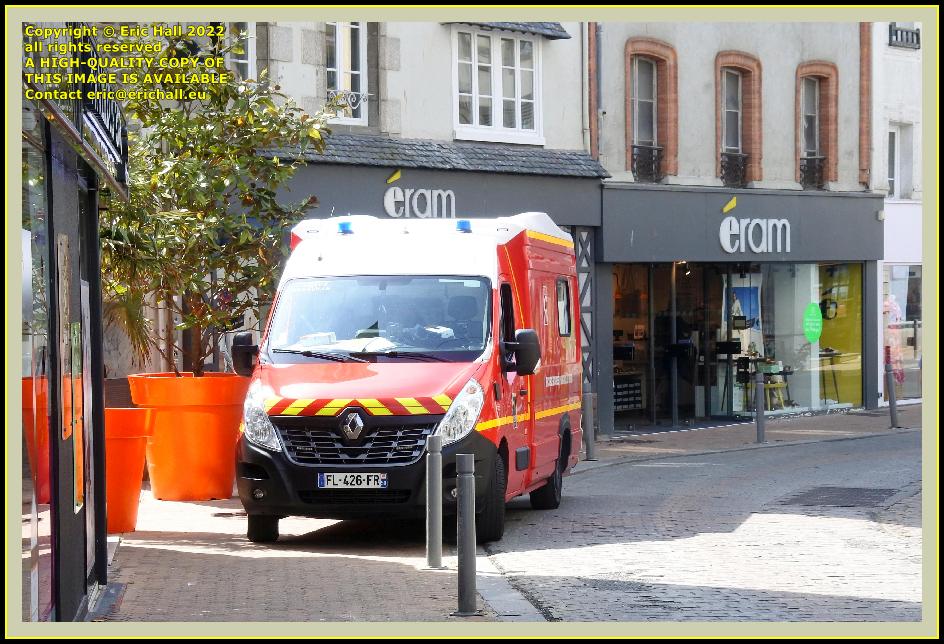 On the way home, down at the bottom of the hill there was yet more excitement.

There was an emergency ambulance parked at the corner of the Rue Couraye and the Rue Paul Poirier, complete with blue flashing light. There wasn’t anyone in attendance though and I couldn’t see where they had gone.

On the corner of the Rue Lecampion I had to go to the pharmacy. The nurse this morning asked me to ask them for a container to deposit my discarded needles. He usually takes them away but I imagine that he’s being overloaded right now. I’ve “had the summons” to have my fourth Covid injection (which he’ll be doing next time he passes) and if I’ve been summoned, so has everyone else. 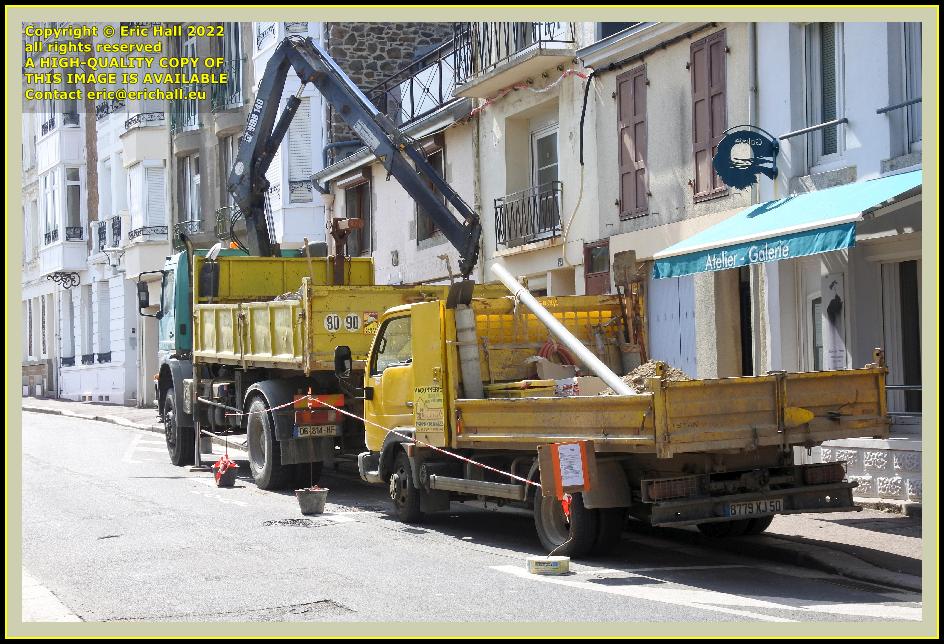 There were several occasions where I had to stop to catch my breath, one of which was just by where there was some building work going on. We had a skip lorry with crane and another small lorry in attendance.

It’s one thing that I’ve noticed, that there seems to be more and more renovation work taking place about the town, either rebuilding or renovating existing apartments or building new ones.

It’s quite a boom business now, but I bet that it’s not going to result in many more permanent homes. Holiday accommodation and Air B&B lets seem to be the way that things are going, pricing permanent residents out of the market. 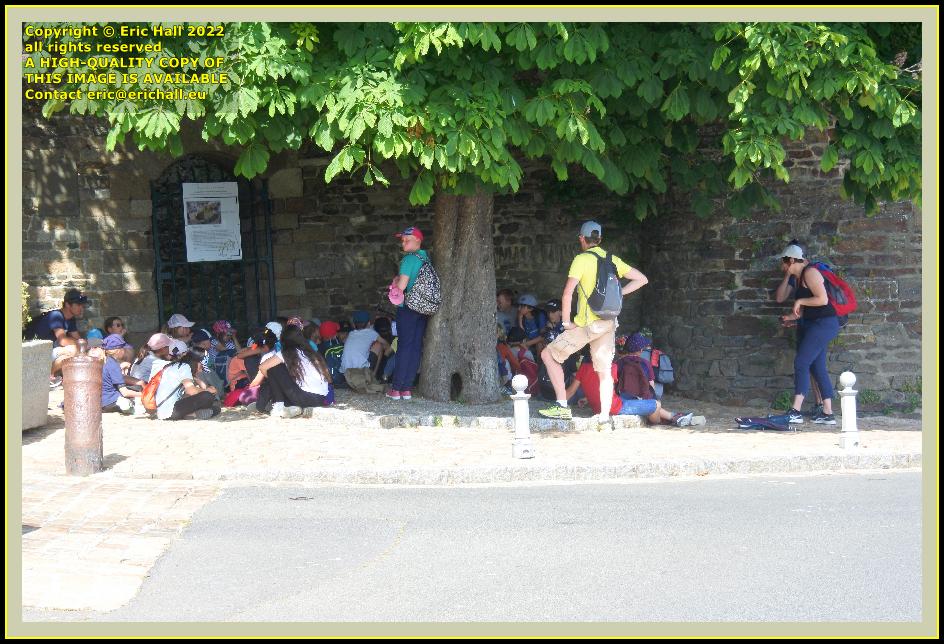 Another thing that I’ve mentioned … “quite often” – ed … on these pages is what is called the classe decouverte.

This involves school kids being taken out of their normal environment to experience life elsewhere. And here is one such class, all congregating underneath the tree by the drawbridge into the walled city while someone was telling them all about the French Revolution.

The walled city is quite important because revolutionary forces defended it against counter-revolutionaries in a famous battle during the Revolution.

The conversation sounded quite interesting and I was in half a mind to hang around and hear the end of it but I was gripped by a raging thirst and wanted to go home. 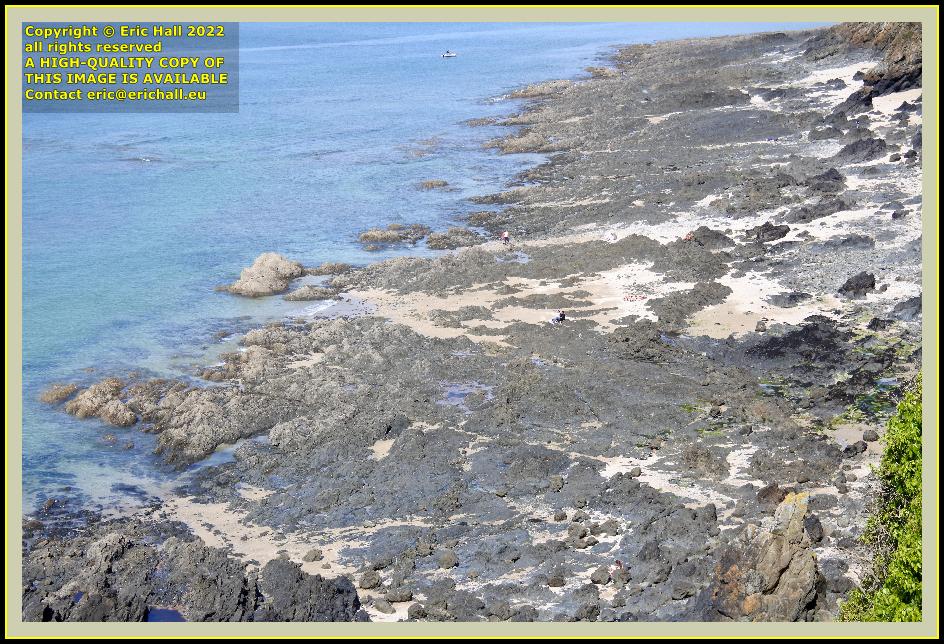 First though, I had to go down to the wall at the end of the car park to have a look down on the beach to see what is happening down there.

Plenty of people down there sunning themselves on the sand and a couple of people out there on a zodiac. But no-one brave enough to go in the water, which was a surprise because it’s a lovely afternoon right now.

Back here I had a coffee and then listened to the dictaphone to find out where I’ve been during the night. I was starting to shave myself with an electric razor last night but no matter how hard I tried, it hardly made any impact at all. I was there for hours trying to shave my face but there was very little hair coming off. I thought that I was going to be here for hours but I had to do it. Now that I’d started, it would look a mess if I only were to do a bit of it. After about an hour I had a feel of my face. There was still plenty on it in places. There was a knock at the door and a girl came in carrying my breakfast. I was lying on the floor trying to do my face so she didn’t see me at first. Eventually she put down the tray and we had a chat. I offered her some of my breakfast but I was still concerned about this shaving and getting my face done so I could hurry up and go out.

Having listened to the radio programmes that I prepared today, I went for tea. Pie with veg and gravy.

And now that I’ve written my notes I’m off to bed. I have a Welsh lesson tomorrow so I need to be on form. But there’s not much danger of that.