And I use the word “we” because I am not alone, and I’m not talking about Strawberry Moose either.

With having had the news that they are going to discuss my heart issues on Thursday when I’m at hospital, one of my friends has rushed to be by my bedside for a long weekend to give me some moral support ready for the (af)fray.

Although whether “moral” is the correct word to be using whenever I’m involved in anything is another consideration completely.

As for who it is, well, let’s just say that it’s someone who features quite regularly in these pages, in a virtual way of course and almost always when I’m on my nocturnal rambles. The rest, you can figure out for yourselves.

These people who figure in my nocturnal rambles by the way – they are real people just in case you are in any doubt. If they are fictitious or imaginary, I say so.

And so how did I prepare for this monumental event?

Well, by going to bed nice and early, and then not being able to sleep a single wink.

First task was to back up the files from yesterday onto the little memory stick that I carry with me so that I can back up the portable computer. Then I had butties to make for the journey and with the bread that was left over I had a thick slice of toast with a strong coffee. I have to keep going somehow.

Surprisingly, I had a shower and a clean-up too. I need to look my best. 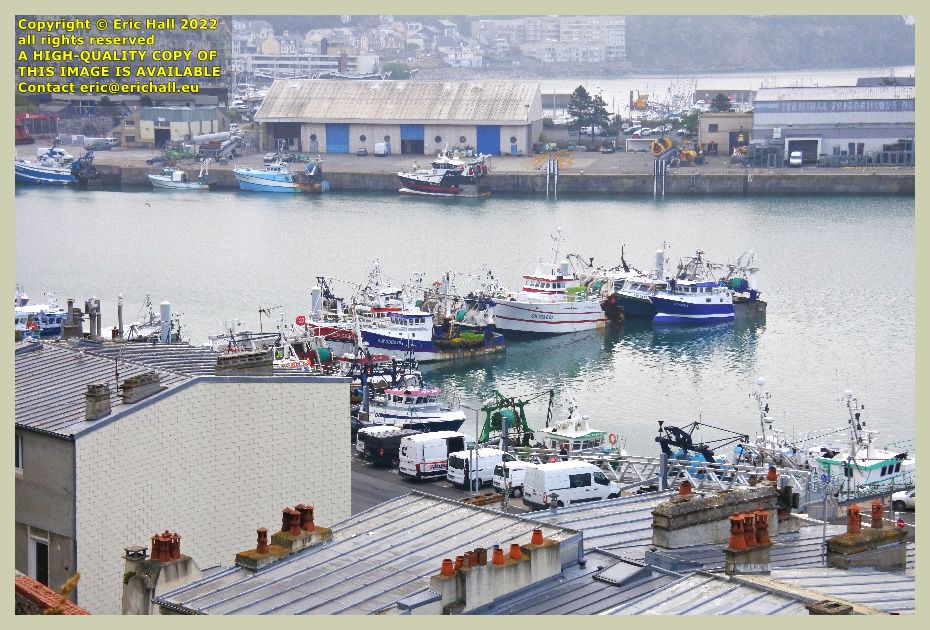 Having given the apartment the once-over with the bleach I headed off out with my suitcase to head to the railway station.

And by the looks of things I was the only person out there this morning. Most of the fishing boats were tied up at the pontoon there.

No Channel Island ferries though. I would have expected the back by now ready to do sea trials and all of that kind of thing before setting off with fare-paying passengers. After all, they have modified the pontoons at the ferry terminal since they last set out and they are leaving it rather late to check that they are suitable. 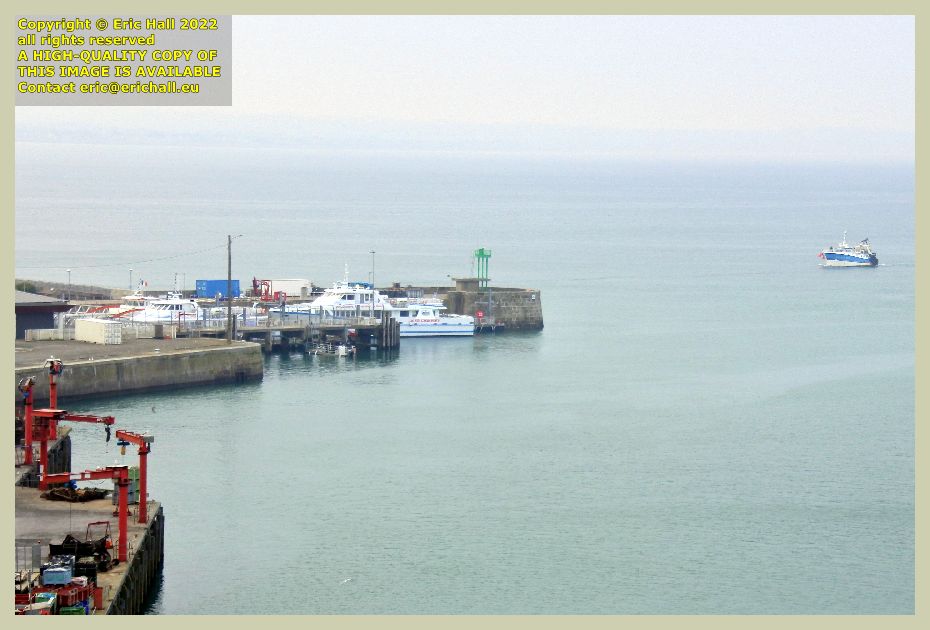 There was one trawler at least out at sea working through the night. As I watched, she came back into port.

As to her identity, I do recognise her but I can’t put a name to her. I was far too busy looking over at the ferry terminal because that was rather busy this morning.

Over there I can see the two Joly France ferries and also Chausiaise, the little freighter that runs out to the Ile de Chausey. It looks as if they are expecting to have a busy day today. There have certainly been plenty of people around the town. I must have tripped over hundreds of them. 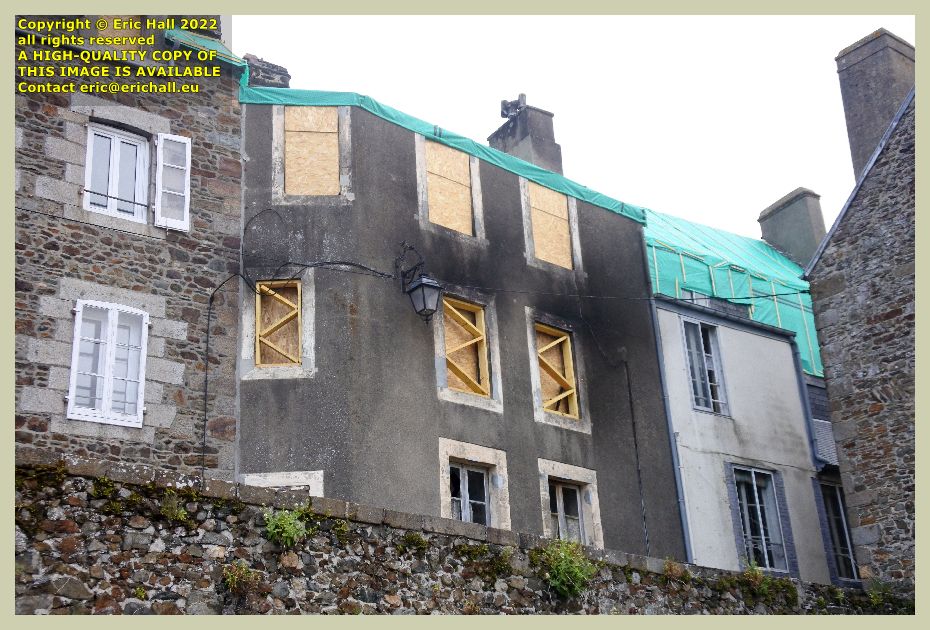 My route down the hill into town takes me past the ruined houses that were burnt out in the fire.

The temporary roofing job has been finished now by the looks of things and you can see what they have done to make the properties waterproof while discussions about liability and repair continue.

But what the outcome will be is anyone’s guess. I can’t see the middle one – the worst of the three – ever being repaired.

Once more, I didn’t really feel like it. The hike up the hill is slowly killing me but I’m resisting all temptation to take the bus. I have to keep on in there fighting it out 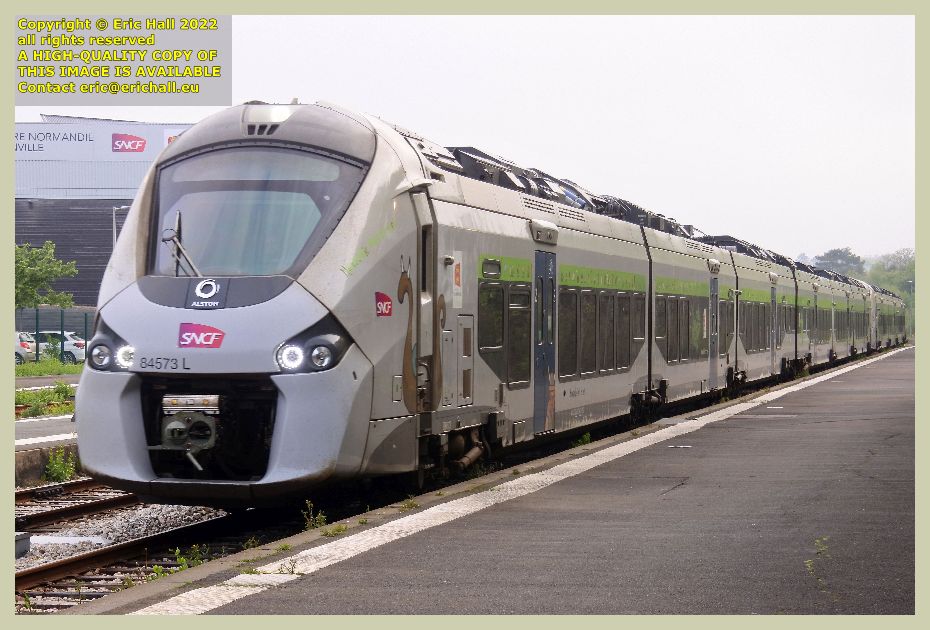 When I eventually arrived at the station I had to wait for a while before my train came in. At least it was a nice morning for a change.

As usual it was one of the Gec Alstom Regiolis trainsets. Well, two trainsets actually and there weren’t all that many people on board so we could all spread out.

However it was fairly crowded by the time that we arrived in Paris but even so, I managed to avoid having company and was thus able to do quite a bit that I would otherwise never have done. 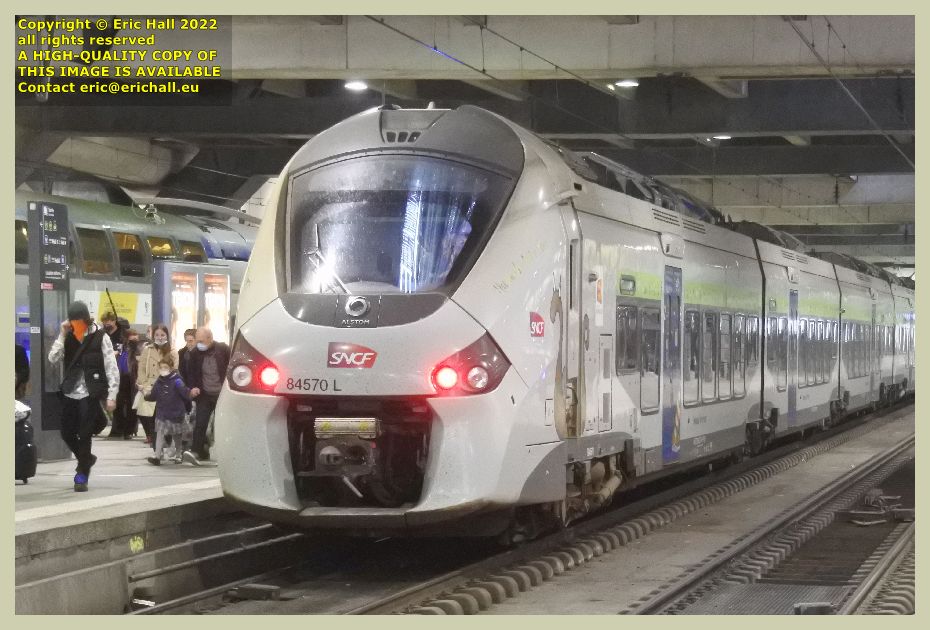 That gave me an opportunity to photograph it before I headed off out of the station and down the road on my way to the entrance to the Metro in the Rue de Départ.

Before joining my train I picked up another block of tickets and some tickets for the airport too. And then when I arrived at the Gare du Nord i legged down through the labyrinth underneath as far as the Metro line 2 where I was going to pick up another train going west 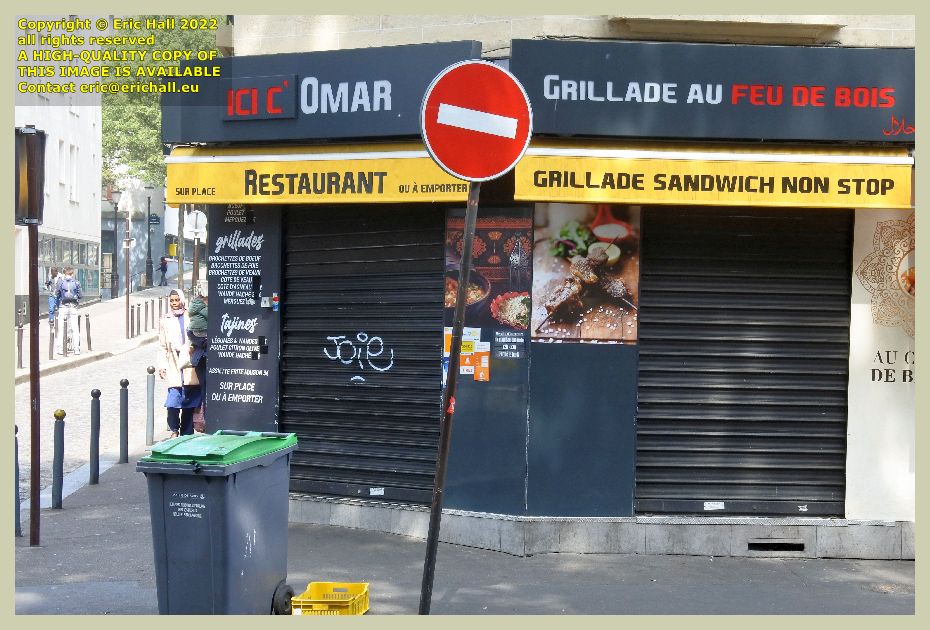 This is a photo that I couldn’t resist taking while I was waiting for my next train.

Three stations down the line I alighted from my train and headed off on foot for my hotel which, surprisingly, is not too far from the Moulin Rouge (like about 200 yards).

My room was (surprisingly) available so I was checked straight in. And I’ll tell you something for nothing – and that is that I’ve not stayed in too many posher dumps than this. I’m afraid to take off my boots in here.

But I didn’t stay long because I had other fish to fry, like back to the Gare du Nord and then out to the airport where I arrived considerably earlier than intended so I had a long wait. But what’s a long wait when you have decent music to listen to?

Eventually my partner in crime turned up and we fought our way back through the crowds to the hotel.

Later o we went across the road to the Lebanese Restaurant and had a delicious tea. And the chat about old times started – after all, it has been years since we last met in person – but it seemed that current topics of the day were more … well … topical I suppose.

But not to worry – there’s a whole weekend yet to fill in the gaps in our lives.

But I’ll tell you something for nothing. And that is that as I have said before … “and on many occasions too” – ed … I don’t have too many friends but those I have are the best in the world.

Where else would you find someone who would leap onto an aeroplane and come to hold your hand for a few days at moments of crisis like this? You don’t get many of them to the Pound, I’ll tell you that!