… that I would much rather forget. I’ve been having a few of these here and there as well just recently.

Although I was in bed last night at 22:30 ready for my 06:00 start, and feeling tired at that as well , by the time that 04:20 came round and I was still awake, I was thoroughly and completely fed up.

Even more surprisingly, when the alarm did go off at 06:00 I was up quite smartly too even if I didn’t feel much like it. And apart from a little wobble here and there just after lunch, I kept on going all day without really crashing out.

And the chances of that happening – well, not happening – are pretty remote as well the way that things have been just recently.

After the medication and checking my mails and messages I sat down and attacked the radio programme that needed preparing.

It was all up and running too at 10:45 and that was a surprise considering all of the interruptions that I had today. There was an early morning coffee, followed by breakfast followed by the nurse coming round early yet again to inject me with the Aranesp ready for my trip away at the weekend.

And having had a visit from the nurse, I had to ring up the doctor for an appointment. I need more Aranesp, having used the last lot, and I have to talk to him about my knee. Now that I’ve had the MRI scan and something has been discovered, I need to find out what is going to happen next.

As well as that, I need a blood test. They upped my medication when I was at the hospital just now, and I need to have the results ready for when I return next Thursday.

There were four radio programmes that I needed to verify today. I’m sending off two today because I won’t be here next Monday, and then there was the one that I prepared last week and never had time to verify, and then there was the one that I’d prepared today. And s much of the rest of the day was spent listening to them to make sure that they passed muster.

While that was going on I was working on the photos from the High Arctic in 2019. Right now I’m on board a zodiac in Flexure Bay off the coast of King William Island on my way to investigate a rather large pod of Beluga Whales.

There were several breaks in this task too. Firstly, I went for a shower. Secondly I had lunch and thirdly I went off for my appointment with the physiotherapist. 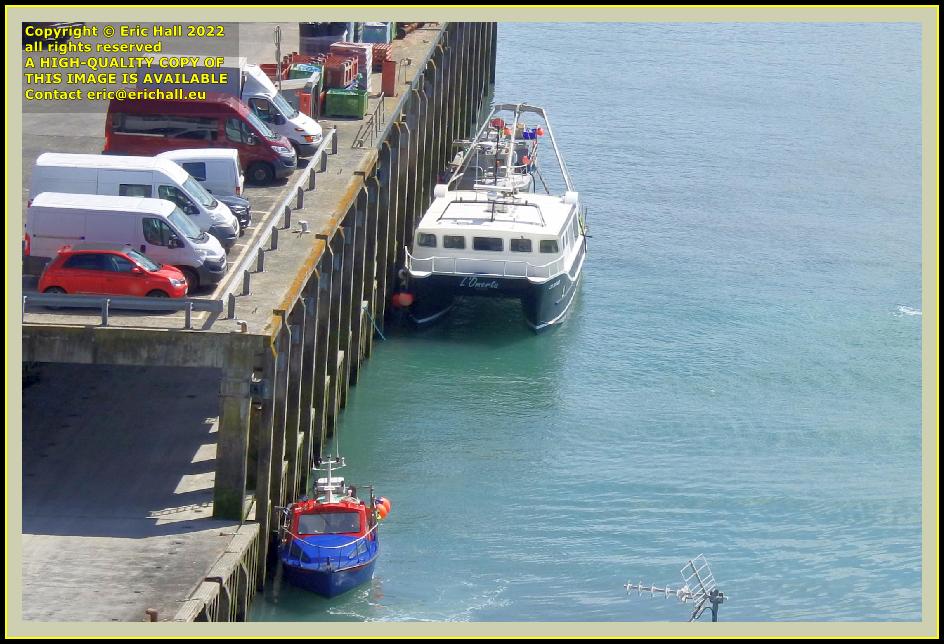 First port – if you pardon the expression – of call was the wall overlooking the harbour on the corner of the Boulevard Vaufleury and the Boulevard des 2E et 202E de Ligne.

Our little game of Musical Ships is continuing this afternoon as well. Although the tide is in, L’Omerta is in with it, tied up at the quayside by the Fish Processing Plant. It must be her turn today.

There are two other boats in the photo too. The one in front looks as if it might be some kind of official boat judging by the colour, but I can’t make out the identity of the one behind her Whoever she is, she’s one of the inshore shell-fishing boats. 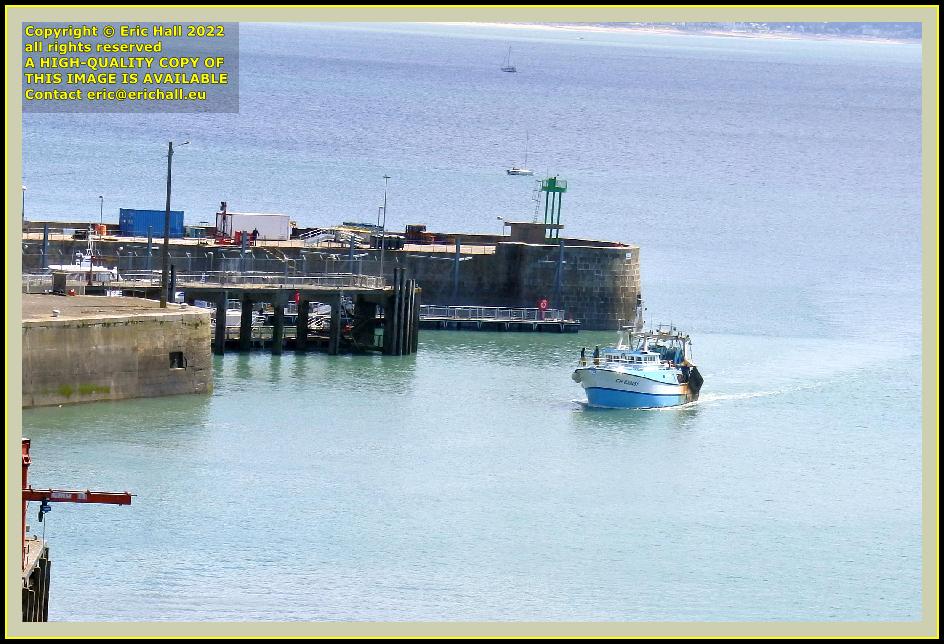 The tide is actually quite well in right now and so one or two fishing boats are heading back to harbour.

This one coming in is Philcathane. Parked up at the ferry terminal is one of the Joly France ferries and the small upper deck superstructure makes me think that she’s the newer one of the two.

And there’s someone standing by the crane too, although there doesn’t look like any freight that needs loading aboard.

There are a couple of yachts out there in the bay behind her having a good sail around too, enjoying the nice weather. 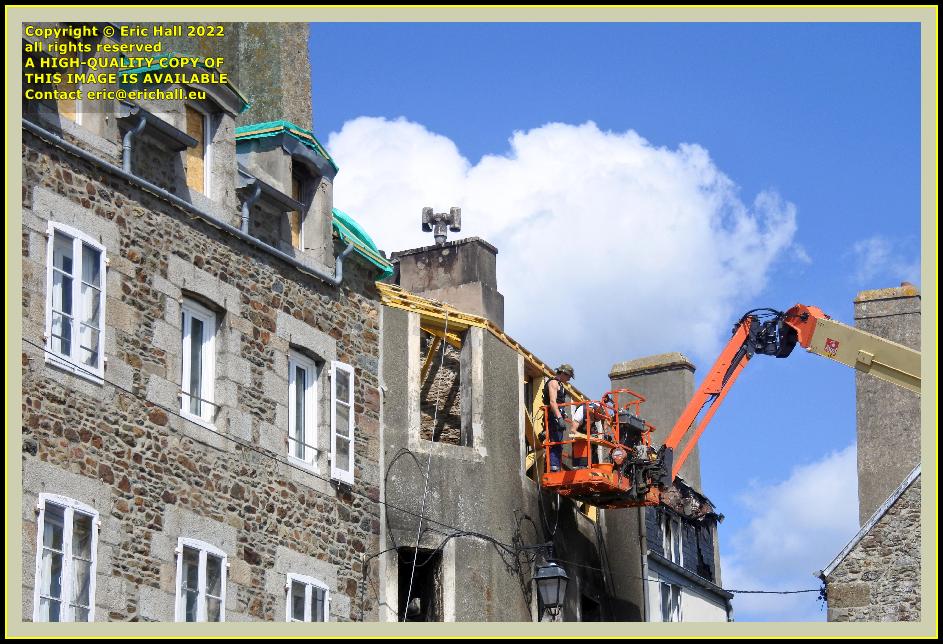 My route into town goes down the Rue des Juifs past the three houses that were devastated by the fire the other week.

There’s been a cherry-picker there for a couple of days with a few workmen in the nacelle. They are putting some kind of wooden framework up there to which they will be covering with a tarpaulin or two.

It’s quite important to keep at least the ones either side of the destroyed house covered in order to stop the elements doing even more damage than the fire has already done, but I think that te one in the centre, on which they were working as I went past, is beyond redemption.

The smell from the fire-damaged structure would be enough to put off anyone who might want to repair it, never mind anyone else. 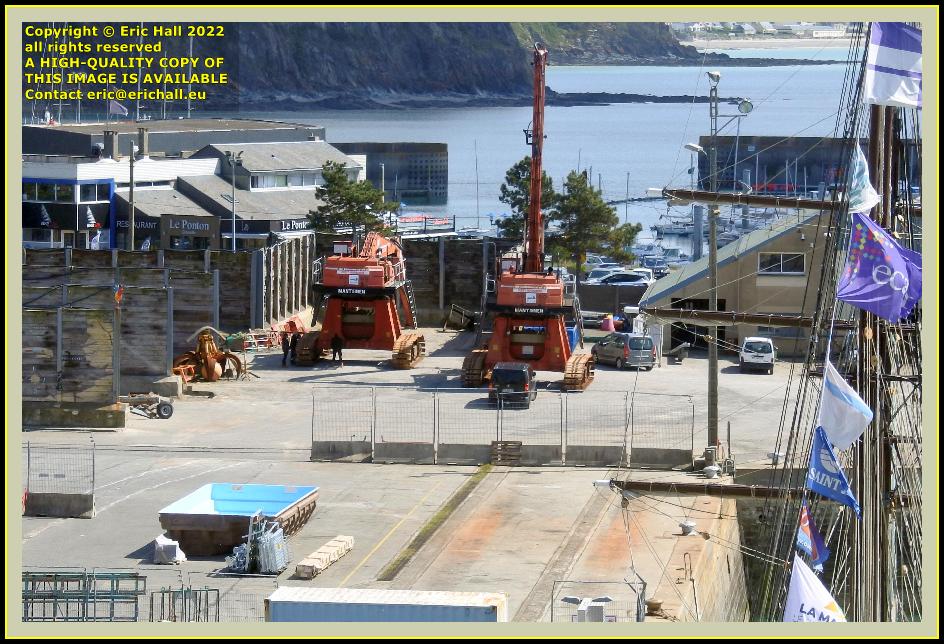 There’s more activity going on in the inner harbour this afternoon.

There are two cranes that work the freight in the harbour and it looks as if they are having a conference this afternoon. And there are a couple of people in attendance too.

On the quayside is another pile of freight, including yet another swimming pool. That can only mean that one of the Jersey freighters will be coming into port quite soon to which it all away.

There wasn’t anything of any interest going on in town this afternoon so I had a pretty uninterrupted trip up the hill towards the physiotherapist.

She gave me an electro-massage on my knee and then had me doing a few exercises.

While I was there I cancelled my appointment for Wednesday as I’m at the doctor’s, and cancelled them for next week too as I’m on my travels again. 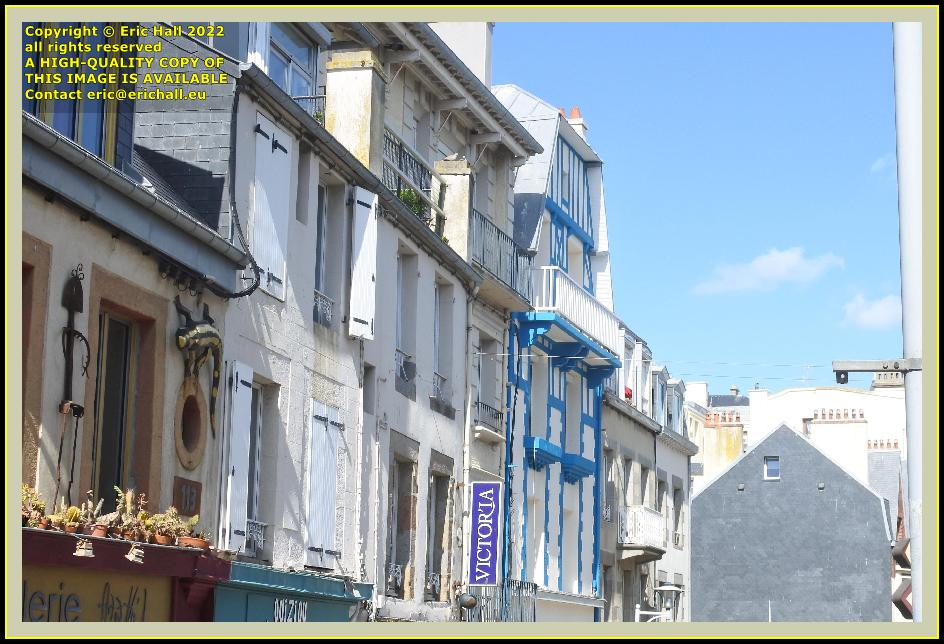 After she threw me out I headed back into town on my way home for my afternoon coffee.

Regular readers of this rubbish will recall that for the last couple of weeks we’d seen some scaffolding up against a building in the Rue Georges Clemenceau. Today, I noticed that the scaffolding has gone and we can see what they have been doing.

It’s the building down there that has the nice fresh blue edging. They have done a pretty good job of painting it and it looks quite nice now. I wonder when they are going to paint a few more to match. 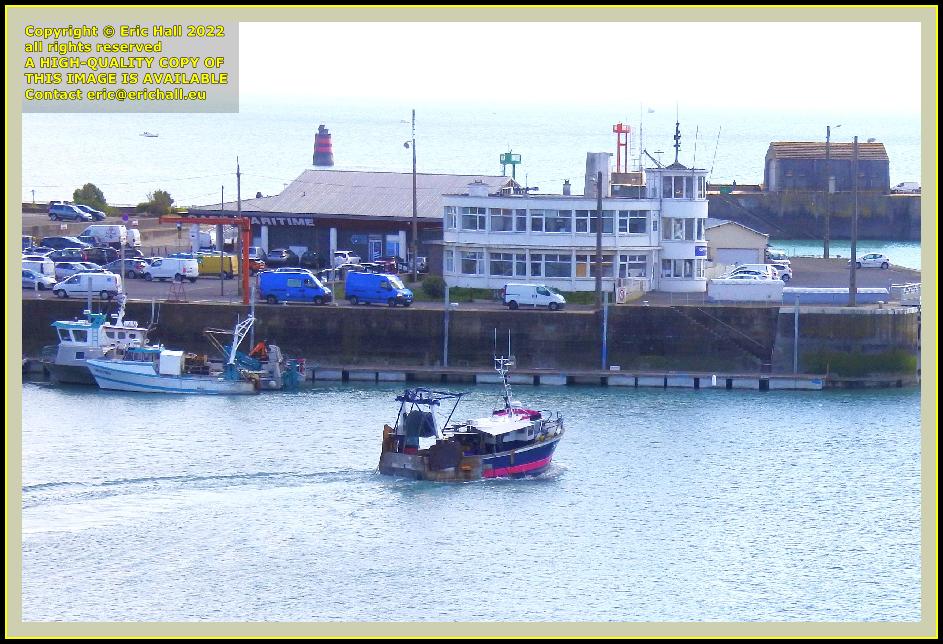 On my way up the hill towards home I walked past the port where I noticed one of the fishing boats heading off out to sea.

Unfortunately she’s not one that I recognise and with only having the NIKON 1 J5 with the standard lens, I’m not likely to be able to enlarge it sufficiently to see its registration number.

Her colours are distinctive enough and I’ll certainly remember her if I ever see her again.

Around here while I was looking at the port I fell in with one of my neighbours on her way home and so we walked up the hill together putting the world to rights. 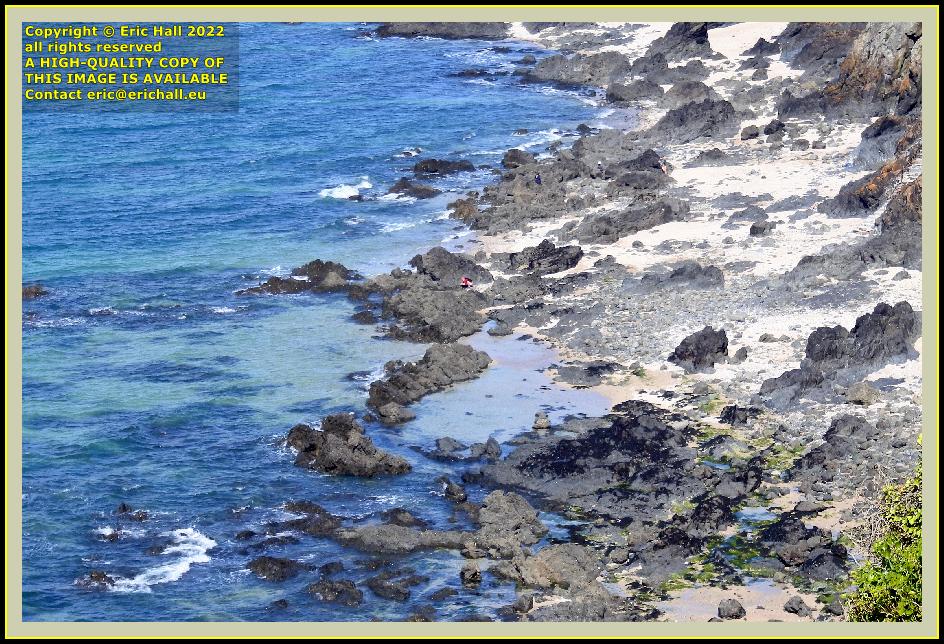 When we arrived at the building I went over to the end of the car park to see what was happening down on the beach.

Firstly, there wasn’t all that much beach to be on. Even so with the nice sunny weather I was expecting to see a few people down there making the most of it.

However, there weren’t all that many people there this afternoon. all I could see were a couple of people loitering around down there.

No-one in the water as far as I could see though. The weather wasn’t all that warm, I suppose. 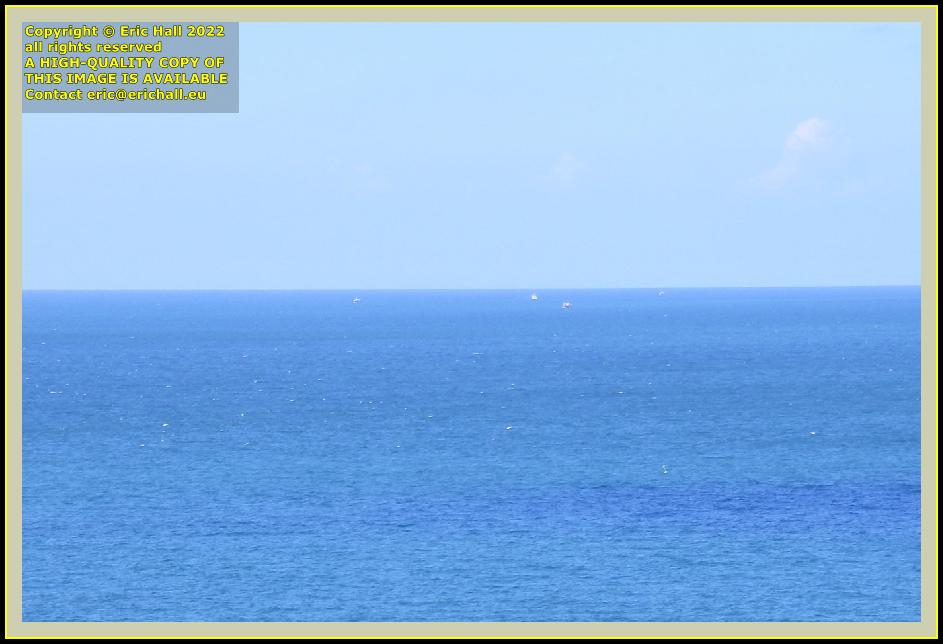 There was plenty of activity going on out at sea.

Even with the standard lens on the camera I could see quite a few boats out there in the bay, although I couldn’t see if they were fishing boats or pleasure craft.

But they were clearly busy so I left them to it and came back here where I bumped into yet another neighbour. It’s my day for being sociable today.

Back here I had a coffee and finished listening to the last of the radio programmes, and then I could see what was going on with the dictaphone.

At some point during the night I must have gone to sleep because there was some stuff on there that I had recorded. Three of us had booked rooms at a hotel (and there’s more to this story than meets the eye too). I’d specified a room next to the other two. I turned up at about 08:30. Of course it was far too early to take my room but I thought that there would be a consigne where I could leave the baggage but they were so busy at reception with people checking out and having breakfast that I had to wait around. Eventually someone came to take over from the night desk staff. We began to chat. He discussed my special requirements – I’d listed dozens of special requirements, some of which were quite silly but he went through them with me. We entered the lift but I’d forgotten half the stuff. There was some stuff that I didn’t know that I had to bring but eventually I collected everything together end we entered the lift. We went up to the 2nd floor but they were vacuuming there so we had to go up the the second-and-a-half floor and come down the stairs at the back in order to arrive at the consigne where I could leave my baggage.

And then I was living in Winsford again. There was a woman there with 3 small children, girls. They were round at my place. I was looking after them, taking turns to take them to the bathroom etc. They met Tuppence, my black cat. They were asking questions about her, how old she was. I said that she must be at least 20 now. They thought that that was wonderful. One of them had a cat that usually hid in a drawer. When she went to open the drawer of course it wasn’t there. Outside, between my house and the next-door neighbour’s I’d erected a suspension bridge. It looked absolutely magnificent. Everyone thought that it was great. I had to have the neighbour sign a liability waiver so that if anything happened to the bridge with him on it he wouldn’t sue me for it. We had an inspection of the bridge and in the end he signed the paper.

Tea was a stuffed pepper – there was one lying around – and it was delicious. And now I’m going to have a little relax and then go to bed. I’m totally exhausted and I’m surprised that I’ve kept on going so long. It just goes to show that I can do it when I want, even when I’ve taken one of those night-time pills.