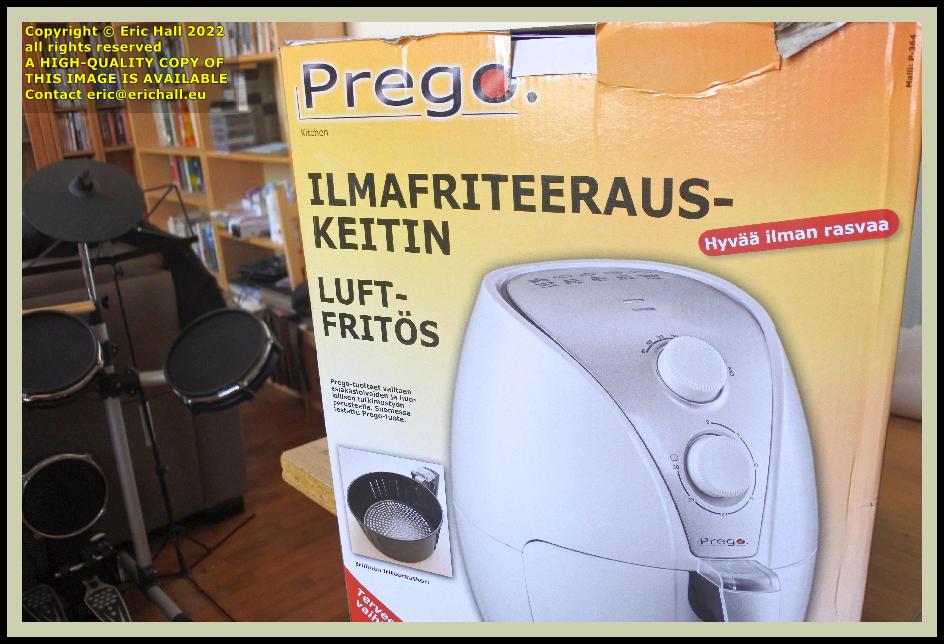 … a week or so trying to fry some chips in the oven earlier this week, I walked into Noz this morning and Lo! And behold! They had some air fryers in stock, at just €29:99 too.

This is a kind of technology that has passed me by up until now so I’ve not really very much idea about how well they work, but at that kind of price it’s well-worth a try.

Bearing in mind the price of oven chips and the electricity that it takes to cook them, I don’t think that it will take too long to recoup my outlay, and they can’t be any worse that what I’ve been eating for chips so far.

One thing that hasn’t convinced me though is the trade-name of the article. I have a feeling that nine months after making my first batch of chips, I’ll be making medical history.

Trying to awaken this morning nearly wrote my name in the history books too. I didn’t quite go back to sleep after the alarm went off but it was pretty close and I only just managed to make it to my feet before the second alarm went off.

After the medication and a shower to clean myself up, I headed off to the shops. Apart from the air fryer, Noz didn’t come up with very much but at leClerc I spent something like a small fortune.

And for two reasons too

Back here I put away the frozen stuff and then made myself a coffee. The slice of fruit bread was delicious too.

Next task was to transcribe the dictaphone notes from last night. And talking about dreaming in French – last night I was with my Welsh class but last night we were speaking Flemish. We’d been on board a ship and it had set sail. I had stayed behind for the next leg of the journey. We carried on having our discussion on line. At one point the discussion became very difficult. One of the girls on board this ship said that it was very late. I had a look at what time it was and I could see that it was a certain time where I was so I said “it must be twintig voor negen where they are. That means that it’s probably late and is getting too late for them”. There was then some discussion about whether we should stop or carry on.

And dreaming in Flemish is a totally new departure, isn’t it?

Later on we were out in the Far East and I stepped back into that dream where I’d left off. We were all getting our radio programmes together but this team there was a team of radio presenters who had to guess whose programme was whose. We did all that we had to do and then our programme was revealed to the public one by one. It came down to the last 3 and there was me, another girl and Liz. They presented their radio programmes and then it came to presenting mine. Mine was about a lake so I presented mine. Then the audience had to award prizes to what they considered to be the best and they also had to guess whose was whose. They were doing pretty well until they reached the last 3, the girl, Liz and me, They had me presenting someone else’s programme but I can’t remember which one – it might have been Liz’s. Then it came to mine which was about the lake but they couldn’t decide who presented it so they gave up. I started off singing the title entry to it, waiting on the podium with this little girl and Liz. I said to the little girl “what do you think? Didn’t we do well?” and we started to sing down the microphone which wasn’t actually picked up by the podcast. They asked me what had inspired me to do this programme. I was beginning some talk about how I had a lorry here and I was on my way to do something else and I just happened to notice the lake in a certain situation, state or colour.

After lunch there was football on the internet – Penybont against Ffynnon Taf in the quarter-final of the Welsh Cup.

Playing football in a hurricane is always a lottery. Even though Penybont are one division and quite a bit above their opponents and played with much more skill, the wind was a great leveller and at one stage Ffynnon Taf were actually leading 2-1.

But almost every second of the last 15 minutes was played in the Ffynnon Taff half and 2 goals in a minute near the end after the Wellmen had gone down to 10 players ensured that Penybont went through. 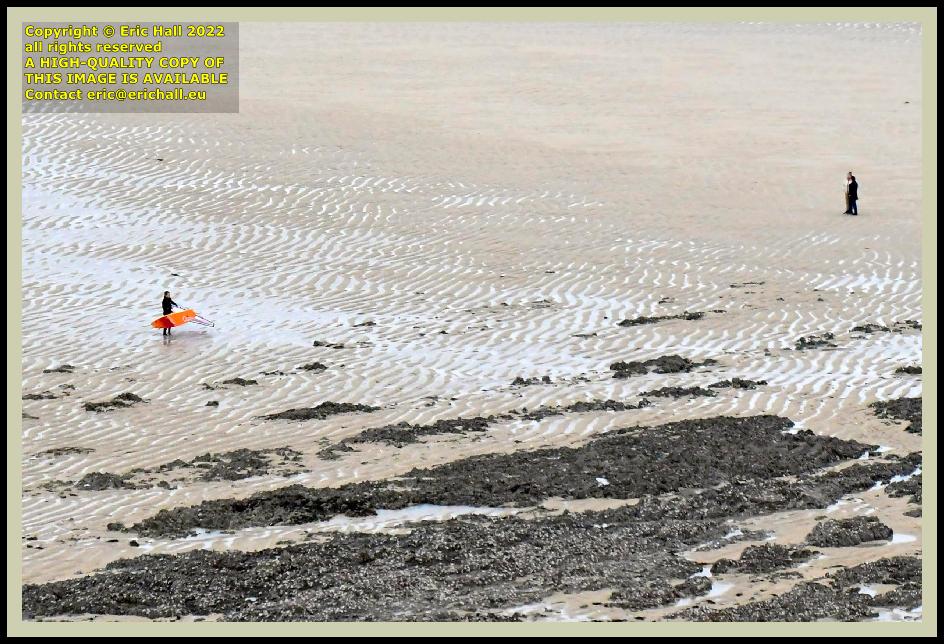 By now it was time to go out for my afternoon walk. I mustn’t forget that.

There were quite a few people walking around down on the beach this afternoon, including a windsurfer who looks as if he’s been making the most of the weather today. The sea might not be as rough as it was yesterday but there was quite a wind still.

And you can see what a mess the sea yesterday has made of the beach, with all of the ripples in the sand caused by the force of the waves as they slammed into it at the height of the storm yesterday. 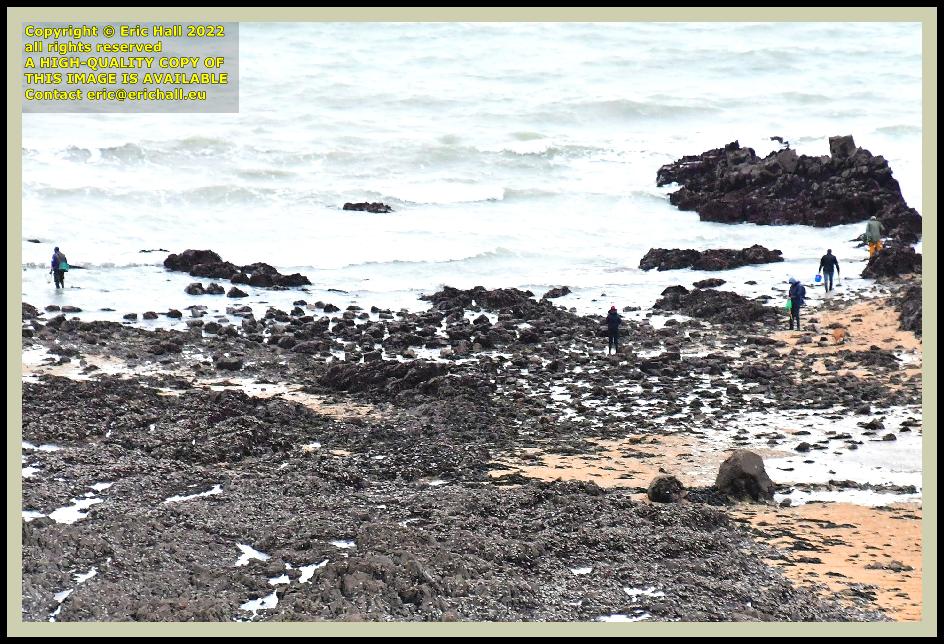 Another thing that the storm will have done is to have ripped a load of shellfish from their beds and cast them onto the rocks.

naturally, the seagulls will have made pretty short work of those but there were plenty of people down there scavenging around to see what they can find while the tide is right out. Let’s hope that they don’t find anything that they wouldn’t want to find

Not too many people up here on the path though today. The wind was quite strong and that was keeping them indoors.

The view out to sea and down the coast was quite clear today too but I wasn’t going to stand on top of a bunker to take a photo in this wind. I’ll leave that for another time when the wind calms down. 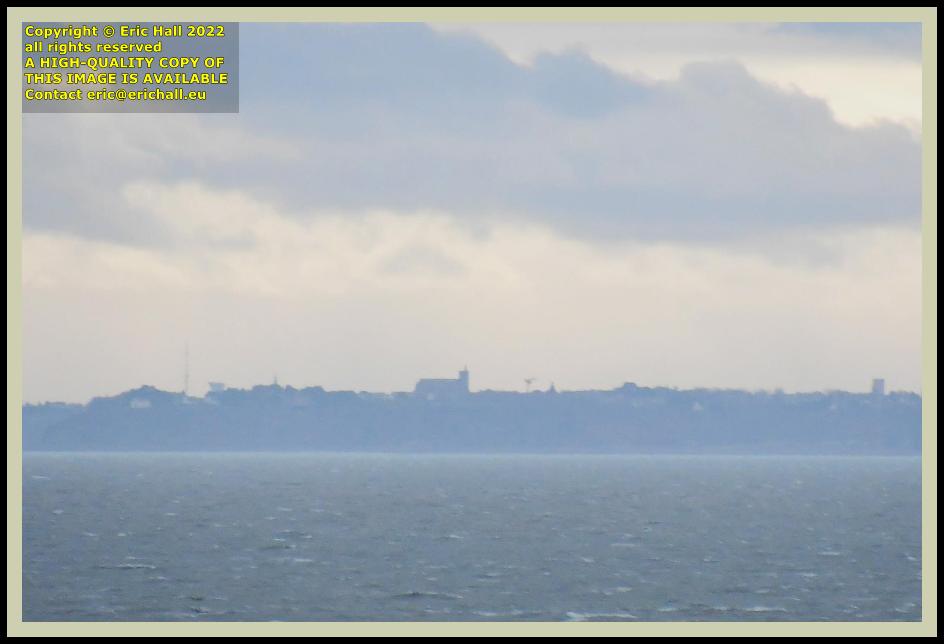 The clear sky though meant that the view across the bay to Cancale was really good this afternoon.

In the lee of another bunker and the lighthouse I could take a photo without being bowled over by the wind.

The church over there is 18 kms away from where I was standing and I know that from bitter experience. I was once looking for a hotel in the vicinity of Granville and one in Cancale – “18kms away” – was recommended. That was of course 18 kms as the crow flies but to drive it was about 70 kms down to the head to the bay and then back up the other side. 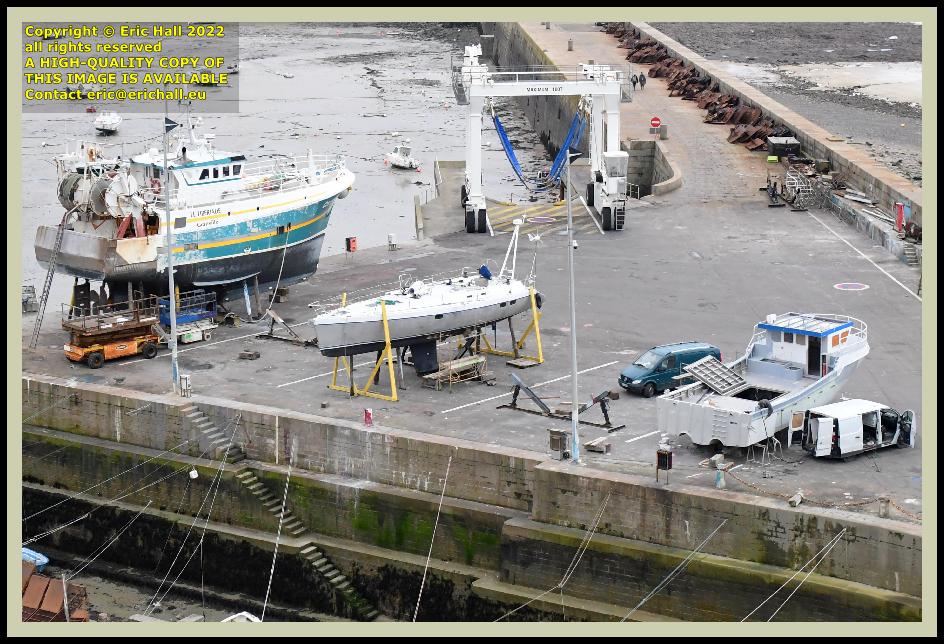 With nothing else going on around the end of the headland I walked on down the path to the viewpoint overlooking the chantier naval.

The other day I talked about the new props on which the yacht down there had been posed, but while I was out in Caliburn this morning I had a closer look and saw that in fact it’s a wooden framework that has been knocked up quite quickly and doesn’t look all that strong.

And as you can see, there are no nets on board Tiberiade. That’s what makes me think that the nets on which they have been working in the inner harbour belong to her.

By the way, Joly France wasn’t at the ferry terminal. So hats off to any travellers who have gone out to the Ile de Chausey this morning in this weather. 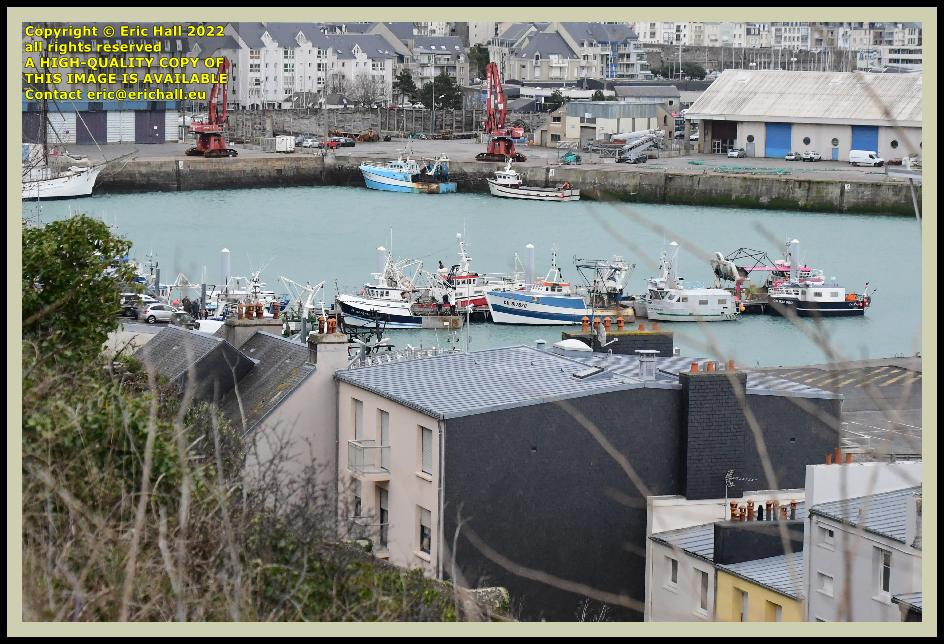 Here though are quite a few people who haven’t gone out to sea today.

As you can see, most of the fishing fleet is in port today, just as it was yesterday. Over on the far side of the harbour are Philcathane and Les Bouchots de Chausey and everyone else is moored up at the pontoon.

On the extreme right is Calean, with Suzanga moored behind her. In front of Calean is Galean, and then Yann Frederic and in front of her is L’Arc en Ciel. 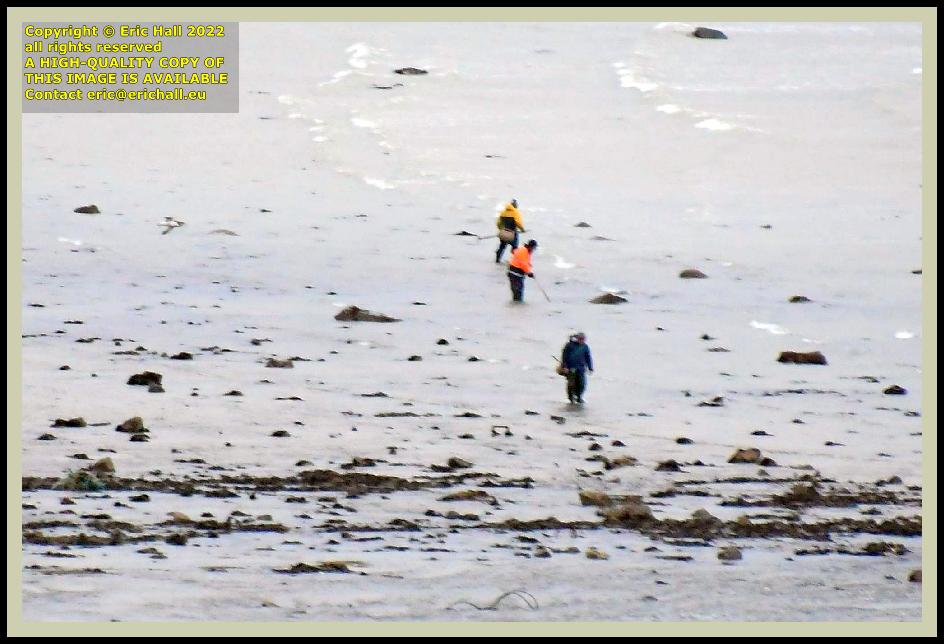 There are people out in the Baie de Mont St Michel having a look at what the storm might have turned up.

But that would be the last place where I would look. That’s right at the entrance to the harbour and all kinds of boats have probably been doing all kinds of things just there.

And so I left them to it and went back home for a hot coffee. But I didn’t have one because I’d had one at half-time during the football and I need to cut down on my coffee consumption. Instead I came in here and …errr … fell asleep for a few minutes.

Tea was a baked potato with veg and a handful of those tiny breaded soya burger things that are really nice when cooked in the microwave in vegan butter.

Tomorrow I’m going to have my long-awaited lie-in and see if I can’t recharge my batteries. They have been run down flat over the last few weeks and I ought to see what I can do about rectifying the situation.

But not tomorrow. I’ll be in bed.